Superstition can be found in every sport. It can lead to some truly weird, whacky, or downright bizarre rituals performed by individuals or teams. Yet some rituals have been so weird that they have turned into the source of legendary tales. This is particularly true in the case of Sergio Goycochea – an Argentinian goalkeeper who represented his country back in the late 80s and early 90s. And as you may have guessed from the title, his ritual didn’t involve a specific meal, morning routine, or anything of the sort.

Instead, it involved relieving himself on the pitch prior to a penalty shootout. No, you haven’t read that wrong, this really is what Goycochea used to do. He claims to have started this ritual during the 1990 World Cup tournament, which was in fact, played in his home nation of Argentina. So who knows, maybe Goycochea was simply marking his territory and letting the others know that this was his pitch? We kid, of course. But similarities and jokes have been made about this in the past, often comparing Goycochea to a dog who does the same things. 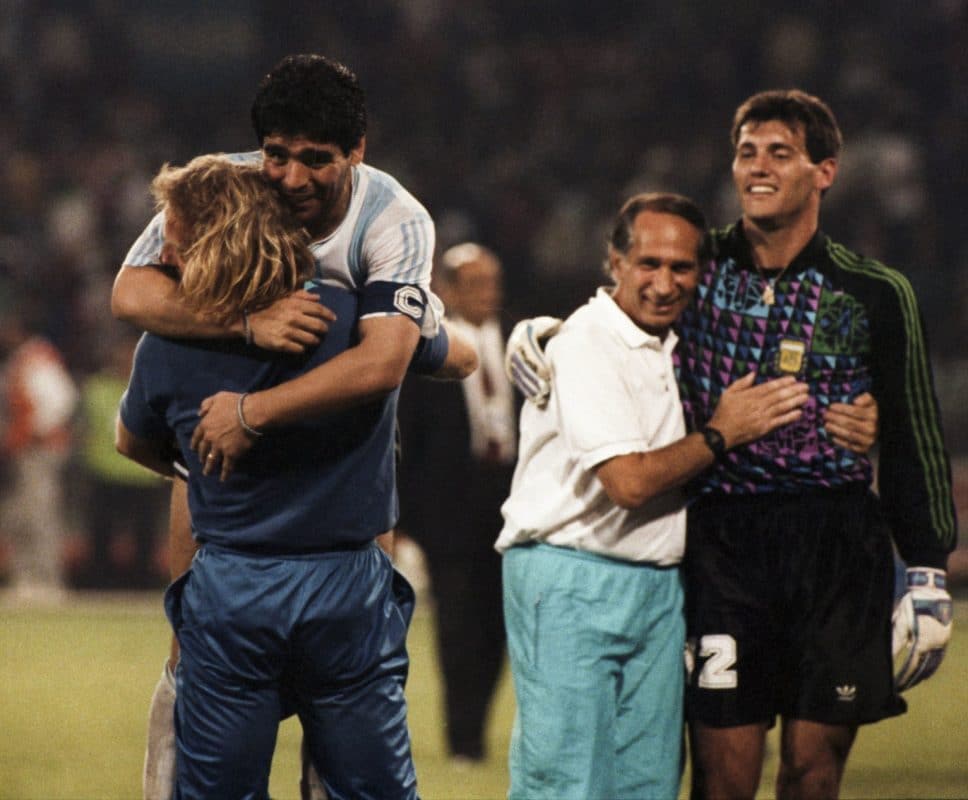 Whichever way you look at it, as disgusting and bizarre as this ritual was, it seemed to work. Goycochea managed to carry Argentina through two penalty shootouts in the 1990 World Cup. He guided them through a shootout in the quarter-finals against Yugoslavia, and he did it again in the semi-finals against Italy. The only reason he didn’t do this in the final was that it didn’t go to a penalty shootout. Then again, this may have been a blessing in disguise now that we know what he was up to when he crouched down beside the goalposts.

So there’s your overview, but there’s more that we need to cover.

As you’ve already learned from the information shared above, Sergio Goycochea was an Argentinian goalkeeper. He was born in 1963 in Buenos Aires, Argentina, and he secured his first place in a professional team at just 18 years of age. So clearly, his talent between the sticks was recognized at an early age. Goycochea bounced around a ton of club teams throughout his career, with his best spells coming at clubs such as River Plate, Millonarios, and Racing Club. It was during his time at River Plate that he received the call-up to represent Argentina on the international stage.

This was in 1987, but Goycochea had previously represented Argentina for the under-20s, which he did back in 1981. As you can see, it took him a while to break into the senior team, although this was likely because Argentina had such a strong squad during those years. Once he received the call-up in 1987, however, he quickly became Argentina’s number-one choice as a goalkeeper. He played for Argentina from 1987 until 1994, playing in two World Cup tournaments during those years. 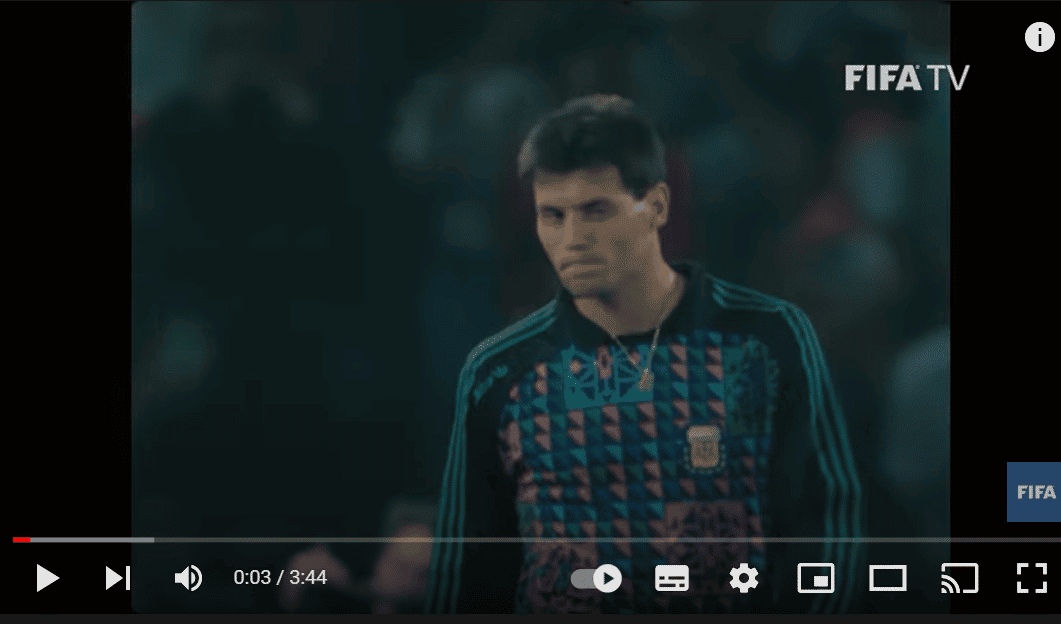 Goycochea represented his nation in the World Cup in both 1990 and 1994, although the 1990 World Cup was where his legendary tale was born. Not only did he prove pivotal in Argentina’s run to the finals, but his ritual of peeing on the field also emerged in this tournament. So not only was he recognized as a hero in Argentina at the time, but he received global recognition for performing one of the most bizarre rituals ever seen. And at this point, we think it’s time to divulge the full details of how this came to be.

Okay – you know that Goycochea is known for peeing on the field before the shootouts took place. And this really does confirm the notion that goalkeepers are some of the craziest guys on the planet. Yet there are also quite a few myths surrounding this ritual, how it came to be, and what he actually did on the field regarding his peeing antics. So let us discuss the specific details of his ritual now so that you know the full story:

It emerged in the quarter-finals against Yugoslavia

The 1990 World Cup was a successful tournament for Argentina. They ultimately made the finals and lost to West Germany. Of course, they would have loved to win the title, but it wasn’t meant to be. And let’s be honest, making the finals of a World Cup is a great accomplishment. However, we’re not focusing on the whole tournament here – we are focusing on the ritual and how it came to be. So, the answer to this first part is that the ritual started against Yugoslavia in the quarter-finals. 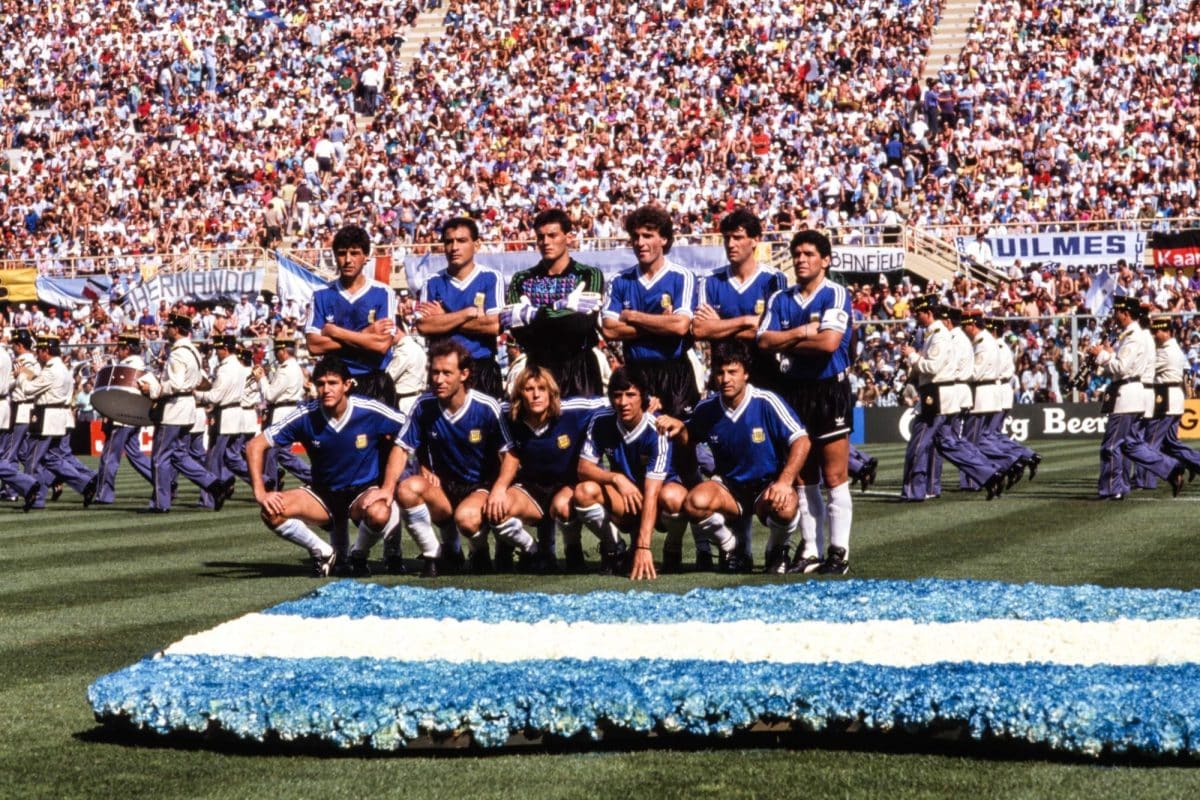 This busts one of the main myths surrounding Goycochea and this ritual. He didn’t always do this, it was only from the quarter-finals of the 1990 World Cup onwards. And he only did this during the 1990 tournament. It was by no means a concrete ritual that he performed throughout his career. When he did do this prior to the shootout against Yugoslavia, it seemed to work. Argentina won the shootout by a score of 3-2, despite guys like Maradonna missing their penalties.

The first time was out of necessity

Let us dispel another myth regarding Goycochea and his peeing antics. Some people think that he randomly decided to take a pee prior to the shootout. This creates an impression of Goycochea that he was a bit of a lunatic, but this isn’t actually true. Prior to the shootout with Yugoslavia, he claims that he desperately needed to go to the toilet, yet there was just no time. After all, you’re probably not going to leave the field right before one of the biggest moments in your career, least of all to go to the toilet. By doing so you would break the focus, miss the inspirational team chat, and somewhat lose the connection with the game itself.

We are sure that Goycochea probably thought of these things in the moment, which prompted his next act. Instead of leaving the pitch to go to the toilet, since he was desperate, he simply went on the pitch before the first penalty was taken. This saved time, ensured he stayed in the moment, and meant that he could now focus on what was about to come. And let’s be honest – we’ve all been there. When you’ve got to go, especially when the need is rather strong shall we say, it’s impossible to focus on anything else!

Therefore, Goycochea clearly decided that the potential embarrassment of relieving himself in front of millions of viewers was worth it. Turns out he was correct too.

The second time was out of superstition

When Goycochea took a pee on the field before the shootout against Yugoslavia, it received plenty of attention from the global media, as expected. But this first time was done because he was just so desperate to relieve himself before the shootout. In the next round, Argentina would find themselves in yet another shootout. This time it was against Italy, and Goycochea wasn’t quite as desperate for the toilet this time around. However, if you thought that he would control himself and avoid repeating this act, you’d be wrong. Goycochea took it upon himself to perform the exact same thing before the shootout started. 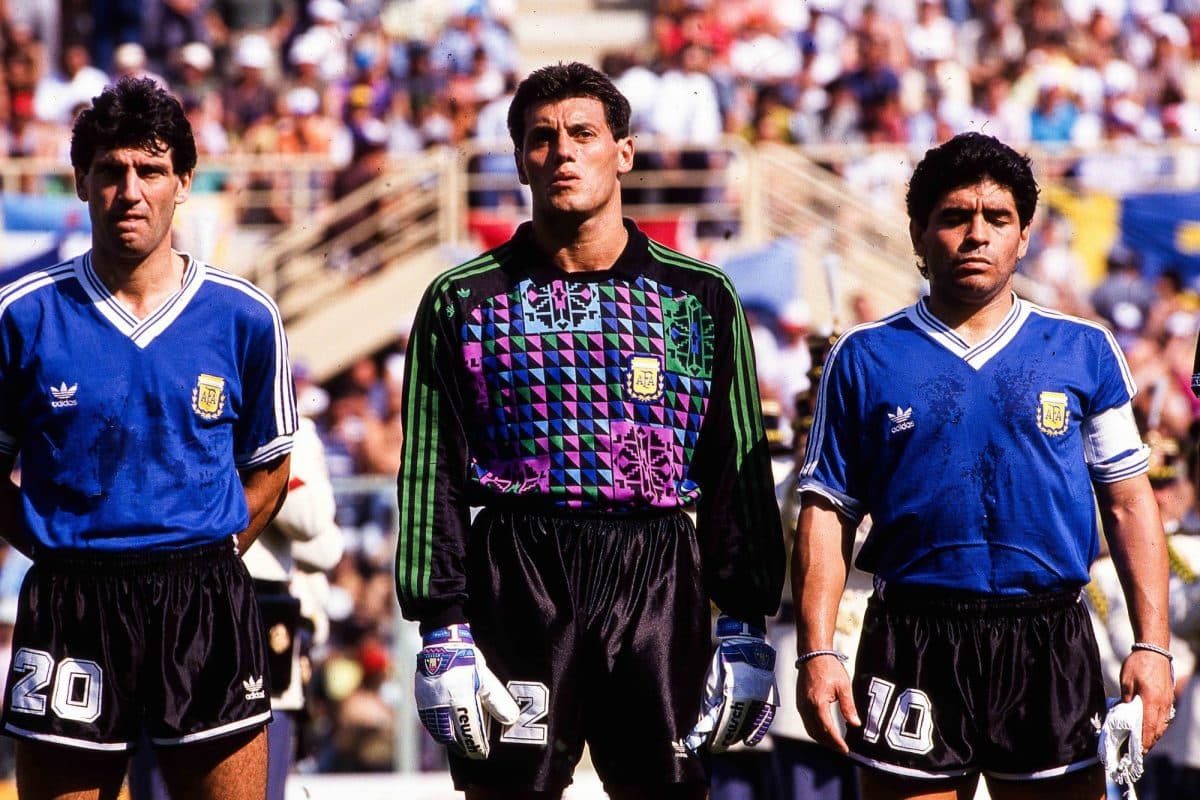 And as it happens, this ritual would serve him well yet again. Argentina managed to beat Italy 4-3 on penalties, and yet again, Goycochea was the hero of the team. In helping Argentina to go through to the World Cup finals in this manner, he had successfully taken them through back-to-back penalty shootouts. As you’d also imagine, his teammates and Argentinian fans couldn’t care less about the ritual of peeing on the pitch at that point. Despite how disgusting it might be, since Goycochea was claiming that this was the secret sauce, they were all going to turn a blind eye and let him do it.

But as the story goes, this second time around, he didn’t really need to go. He simply thought that since he did this in the quarter-finals and they went through – he would repeat the ritual.

How he actually peed on the pitch

When you read that Goycochea was urinating on the field, all kinds of images might run through your head, understandably. You may have thought that he simply stood there and relieved himself in full view of the entire stadium, but that isn’t the case. Goycochea would actually get the team to surround him as he kneeled next to the goalposts, and then he would relieve himself through the underside of his shorts. This helped to avoid exposing himself in front of thousands in the stadium, as well as millions at home. And it also helped to avoid the common myth that he simply urinated into his shorts.

Then again, we all know how rumours can get exaggerated, and this gives birth to myths that are more extreme than the truth. However, the fact that he would go ahead and pee on the field prior to the 1990 shootouts makes this one of the strangest rituals we’ve ever seen. Goycochea never attempts to deny the rituals either, he just owns it. So in a way, one has to respect that he is so honest about what he did.