Just days before the start of Euro ’92, Denmark, who had failed to qualify for the tournament, were told to get a squad together following the disqualification of Yugoslavia; less than a month later, they stunned the footballing world by being crowned champions of Europe.

An expanded European Championship may be ensuring that a number of less fancied teams are assured of progressing to the later stages of this year’s competition; but in the summer of 1992 a team who had no right to even be in the tournament not only advanced – they won it outright.

The Danish players had been preparing for pre-season friendlies and planning family holidays when they were told that it was to be them and not Yugoslavia who would be taking part in the European Championships of 1992 but few could have predicted just how far they would go as they joined the continent’s elite sides in Sweden.

Having finished second in the group behind the Yugoslavs, the eight-team format of the tournament meant there would be no play-off and no second chances, they were  runners-up and that-was-that. But uncertainty in the Balkans was to give them a wild-card they would ultimately grab with both hands.

Unrest and civil war in the region meant that UEFA would take the drastic steps of disqualifying Yugoslavia and into their place would step Denmark, a team who had promised so much in the mid-1980s; but in recent years were on something of a slump.

Much has been written about their poor preparation for that tournament, due to the fact that up until a week prior to the event, they had no idea they would be taking part; but this is something of a myth according to Kim Vilfort who would go on to play such a key role in his side’s success that summer.

“There were those who didn't believe we would be included, but we were aware of small talk that this could be the situation,” the former midfielder explained some years afterwards.

“Then we got the news. There was no discussion. Denmark had to participate in the tournament. It wasn't possible to say ‘no' because it would not have helped the relationship between UEFA and the Danish Football Association.” 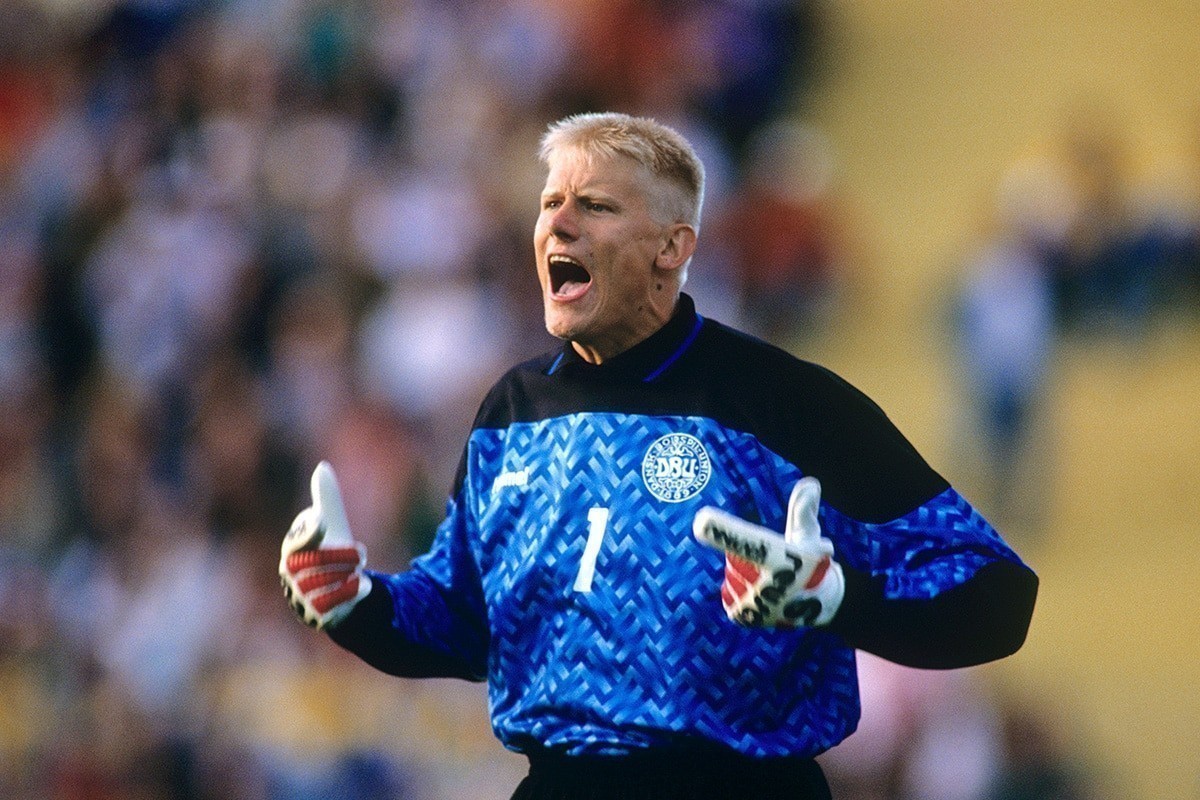 But to paint Denmark as some kind of rag-tag outfit who had turned-up just for a jolly would be unfair. Yes, they were fortunate to be there, but this was a team that contained a number of top quality players with plenty of experience at both club and international level.

“We had a good team,” claims Vilfort. “We'd beaten Yugoslavia in the group stages and had been scheduled to play the CIS [team of former Soviet Union states] the week before the start of the competition in a friendly.”

The Danes were effective if not attractive and relied upon a defensive style of play, with only Brian Laudrup offering any kind of attacking flair; but they had Manchester United’s new signing Peter Schmeichel in goal, not to mention the likes of John Jensen, who would sign for Arsenal on the back of his performances in this tournament. Even so, expectation levels were low and according to Vilfort: “We couldn't fail because there were no expectations. If we lost 5-0 three times then that would not have mattered.”

Denmark were parachuted into a group which contained England, France and hosts Sweden and as the tournament got underway there were to be few signs that the latecomers would even cause a ripple, let alone a stir.

Drawing with England in the first game, Denmark then lost against Sweden before beating France in the final group game, 2-1. Jean-Marie Papin scored France’s goal Henrik Larsen had opened the scoring in the first ten minutes. Denmark were going out as it stood but their fortunes changed when Lars Elstrup scoredwith 12 minutes to go.

Pre-tournament big-shots England and France were now out of the reckoning and on their way home, but as for the Danes, they faced holders Netherlands, who everyone expected to brush aside their opponents and retain the trophy they had claimed in Germany four years previously.

However, the Danes battled bravely and the match finished 2-2 after 90 minutes, with Larsen grabbing a brace, which would ultimately see him take the tournament’s Golden Boot. A scoreless extra-time followed, so the tie would have to be settled on penalties. 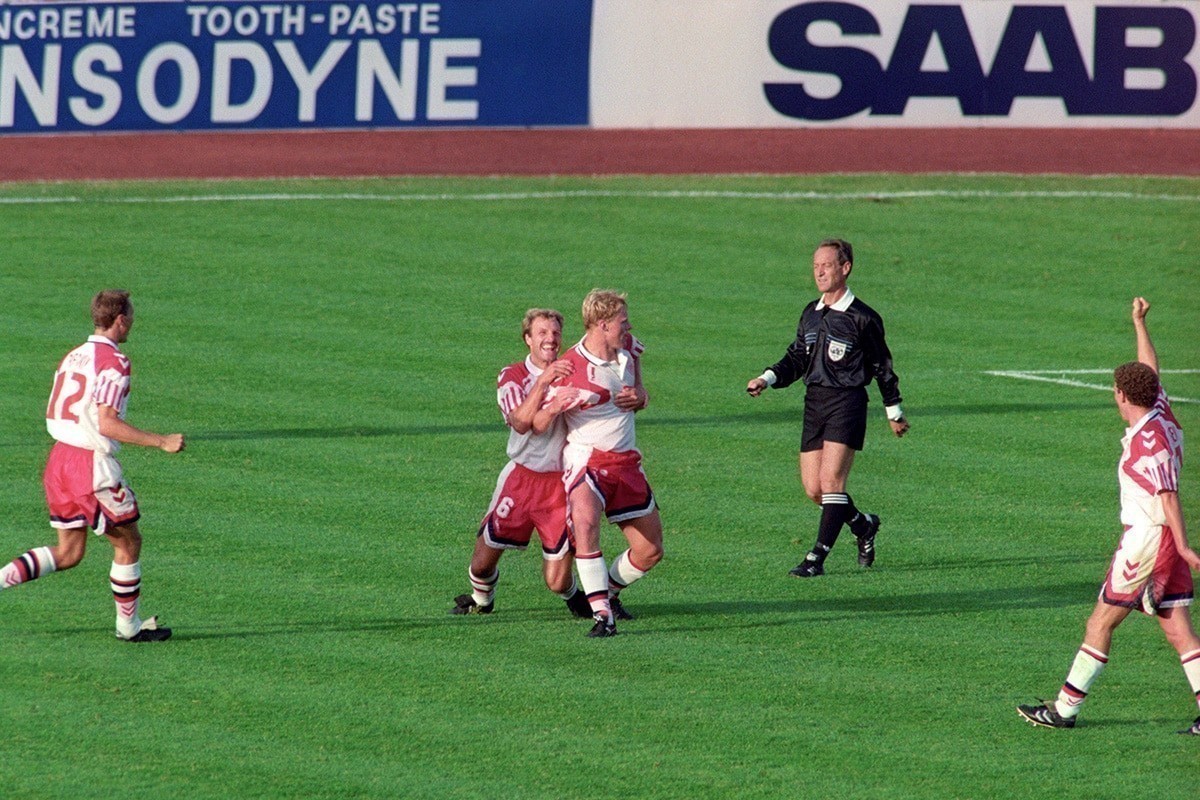 In the shoot-out that followed it would be the hero of Euro ’88, Marco van Basten, who would have the honour of being the only player not to convert when his kick was saved by Schmeichel and defender Kim Christofte eventually sealed Denmark's place in the final.

Having dispatched with the reigning champions of Europe in the semi-final, Denmark would now face the current World Cup holders in a final that only the most optimistic Denmark fans and even players could have expected to have reached.

West Germany, as they had been when claiming the world champions crown at Italy 1990, were a fearsome side and a number of the side that beat Argentina in Rome two years earlier were still instrumental in the now unified German side.

But despite the anticipation of something of a David versus Goliath final the match itself proved to be far from the showpiece that so many had been looking forward to. Germany’s preference for using a sweeper-system meant they were happy to play defensively, while Denmark did little to threaten.

With both teams having extra numbers in defence, Germany’s Jurgen Klinsmann was the only player looking to worry the Danish defenders and make something happen whilst the German five-man back-line easily outnumbered and neutralised the Danish attack.

Germany continued to dominate the opening stages of the final and Schmeichel was kept busy in the Danish goal, saving from Karl-Heinz Riedle, Stefan Reuter and Guido Buchwald; but the next opportunity of the game fell to Denmark and proved to be key.

A poorly directed header caused some calamitous defending by the Germans as two players went for the same ball, which led to Povlsen, sending a pass to John Jensen who,on the edge of the penalty box, confidently struck the ball past Bodo Illgner, who could only duck out of the way as it flew past his head.

The Brondby central midfielder wasn't known for his goal scoring prowess and had only scored one goal in 48 internationals, but had grabbed his second in spectacular fashion which rocked Germany, who now had to come out of their defensive shells. 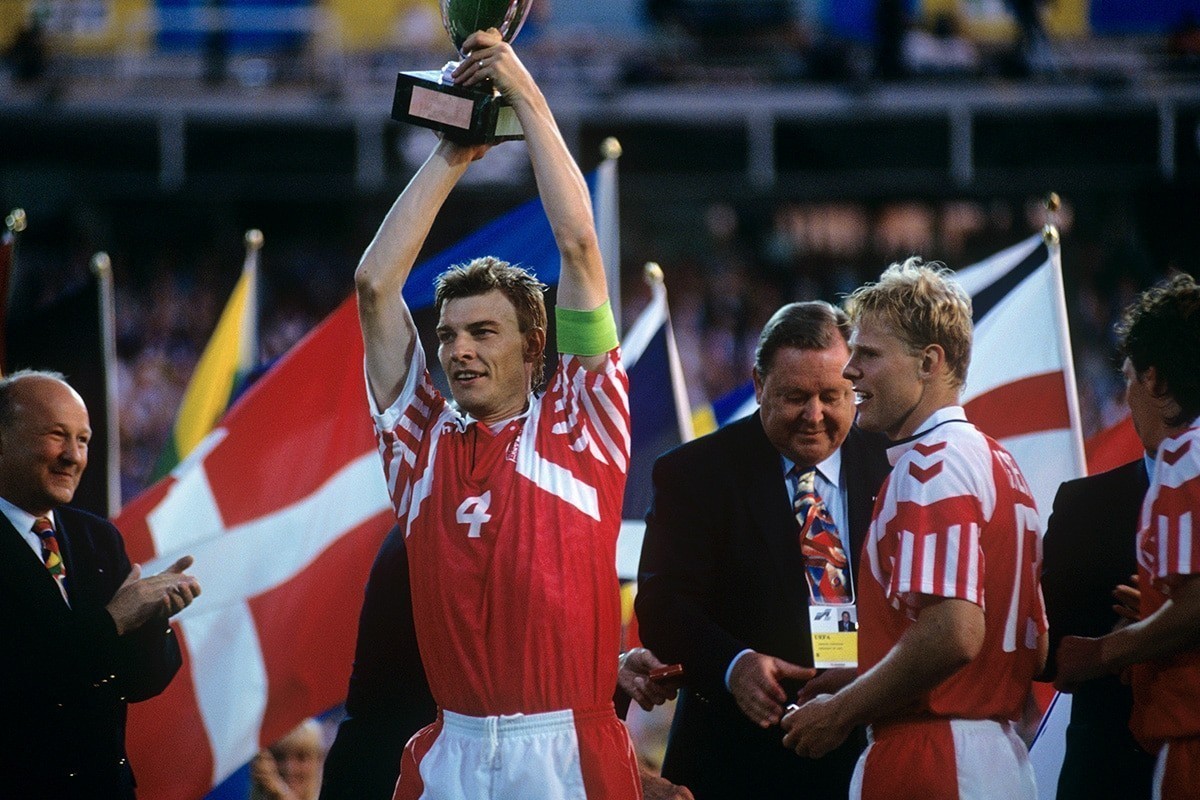 Germany immediately looked to get back into the game, but their penetration through the Danish midfield only went as far as their rigid backline, whose narrowness caused an impenetrable barrier. For all the German’s efforts, the Danish were just happy to sit and keep things tight in the middle of the park.

Denmark were more than content to protect what they had while biding their time to hit their opponents on the counter-attack and with 11 minutes remaining Vilfort found himself on the edge of the area, eluded two defenders and drilled home Denmark's second goal via the foot of the post and the fairytale was complete.

Football has always loved an underdog story and Denmark’s victory at the 1992 European Championship provided the ultimate fairytale; but as well as the emotion that surrounded that astonishing victory, there can be no doubting that the trophy ended up in the right hands, as Richard Moller Nielsen’s side grew in confidence with every game, having originally only been there as last minute replacements.

That victory over Germany in the Gothenburg final marked the Dane’s meteoric rise from plucky underdogs to continental champions and nobody could deny they had deserved it.

Playing every game as though it was their last with no pressure whatsoever – and even though they might not have been as entertaining as their predecessors a decade or so earlier – they had now reached the promise land thanks to a combination of good organisation and impressive management to achieve the greatest victory in the nation’s history. As Kim Vilfort put it: “We didn't have the best players, but we had the best team.”