When the charismatic figure of Jose Mourinho arrived at Stamford Bridge to announce himself as ‘The Special One’ in the summer of 2004, football fans and journalists salivated at the prospect of the inevitable drama that was set to follow the new Chelsea manager. Not only had the Blues become overnight giants thanks to the financial force of Roman Abramovich, but the West Londoners now had one of the most enigmatic and sought after young coaches at the helm.

Mourinho’s flamboyancy had already stamped a mark on English football as, just months prior to his arrival, the Portuguese manager provided one of the most iconic images in living memory courtesy of a touchline sprint at Old Trafford following Porto’s las-gasp quarter-final winner against Manchester United. After leading the Dragoes to the unlikeliest of Champions League titles, the man who once served as an interpreter for Sir Bobby Robson in both Portugal and Spain had now earned a promotion to top billing.

Given the combination of success at Porto and monetary strength of his new club, most expected Mourinho to transform Chelsea into a major force in English football; but nobody could have anticipated the monumental metamorphosis that his influence would bring to the DNA of Premier League action.

It didn’t take long for Mourinho to stamp his authority on Chelsea Football Club and the Premier League as a whole. The then 41-year-old was vigorously backed in the pre-season transfer window as no less than five eight-figure signings were sanctioned. Abramovich had fired an instant signal of intent in supporting those deals. Perhaps more importantly, though, the owner was ready to give Mourinho free rein regarding tactics. With that blessing, the Portuguese manager set about proving those assertive ‘Special One’ boasts with immediate effect.

Attacking players win games but it’s the defensive unit that wins titles, and Mourinho was quick to establish a formidable guard. The recruitment of Petr Cech would prove to be a masterstroke as the Czech international would go on to register more clean sheets than any other goalkeeper in Premier League history. Meanwhile, bringing in Ricardo Carvalho to partner Glen Johnson would provide a more attacking option on the right side of the back four; first and foremost, though, this Blues defence was assembled with solidarity in mind.

This in itself was nothing new. Manchester United had built their success on a solid platform of strong defensive players; Steve Bruce, Gary Pallister, Jaap Stam and co always offered security ahead of an equally frightening Peter Schmeichel. Similarly, Arsene Wenger’s Arsenal had enjoyed their most successful spells when the likes of David Seaman, Tony Adams, Jens Lehmann and Sol Campbell had established solid foundations. Aside from the slightly more conservative use of full-backs, Mourinho’s unique stance came courtesy of his midfield protection.

The midfield armour of Roy Keane and Patrick Vieira had worked wonders for the Red Devils and Gunners respectively, and Mourinho would make great use of a dynamic protector too in the form of Claude Makelele. However, football is a game where tight margins and minor tweaks can make all the difference. The change in emphasis regarding the deployment of his defensive maestro would arguably become the most influential factor in 21st century Premier League football.

Whereas Keane and Vieira had been box-to-box driving forces forming the focal point of their respective clubs, Makelele became an anchor to Chelsea’s midfield. The Frenchman was actively discouraged from worrying about the play in the final third. His sole job was to offer further protection to an already formidable backline, and he performed it to perfection. In fact, a potent combination of discipline and mental reading of the game was so finely tuned that pundits would later come to name this position in Makelele’s honour.

Quite frankly, the Makelele role changed everything.

Mourinho was equipped with a very distinct philosophy from the outset, but creating such a strong defensive unit could only become successful if the attacking players were ready to dominate in a ruthless fashion. To truly see the defensive benefits of using the midfield anchor, there had to be another alteration.

More than a few eyebrows were raised when Mourinho swiftly forked out a then-club record £24m for Didier Drogba from Marseille. Despite a fairly modest goal tally during his opening campaign in England, the Ivorian played an integral role in helping the Special One realise his vision. It had been less than a decade since Brazilian Ronaldo rewrote the manual on what a truly world-class complete striker could do on the pitch, and Drogba was on the cusp of doing the same for target men. 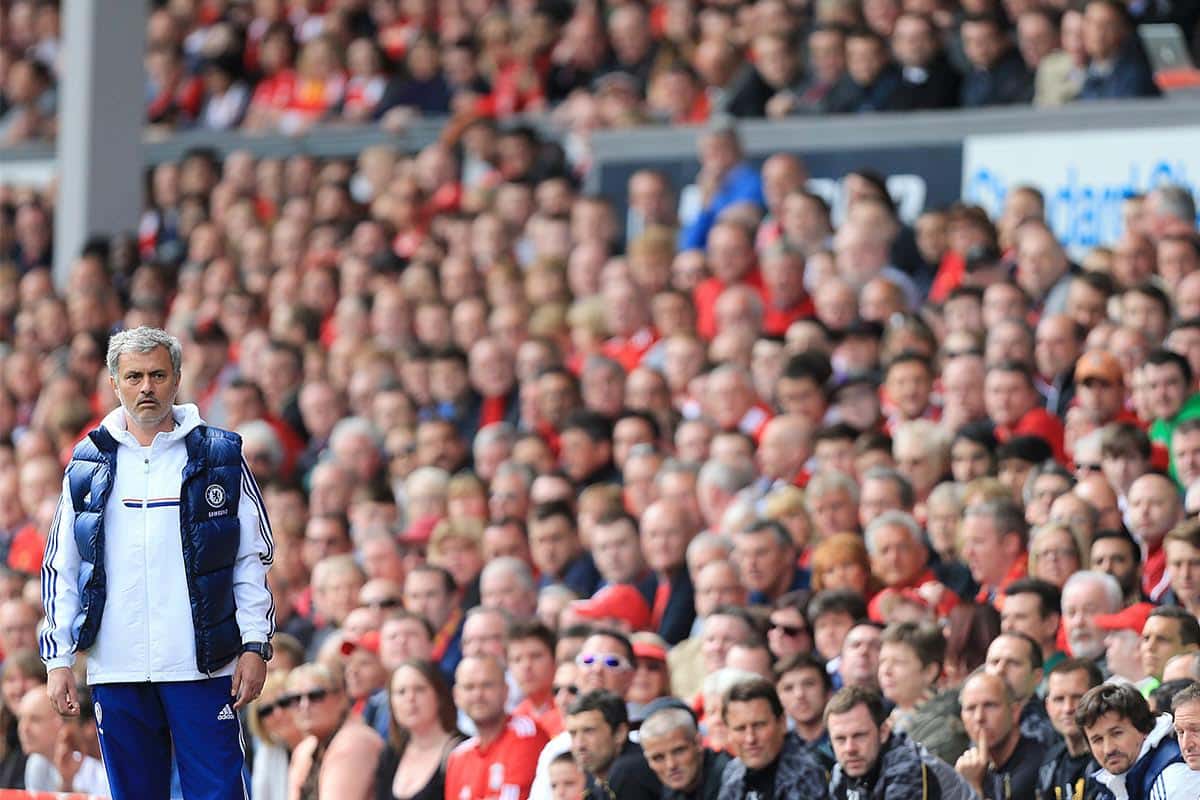 Up until this point, it was the norm for strikers to work in partnerships. Unlike other target men, Drogba had mobility and speed to his game, making him a nightmare for defenders. The Ivorian’s presence was enough to keep two central defenders occupied at once. In turn, this allowed Mourinho’s Chelsea to pack the midfield with three central players. Furthermore, with Makelele providing a defensive pivot, Joe Cole had the license to roam.

Smart wing play had always been a major attribute of any successful Premier League side. Whether it was the likes of Ryan Giggs and David Beckham at Old Trafford or Marc Overmars and Robert Pires at Highbury, great width had often been the key to unlocking tight defences. Despite a slight lack of support from the full-backs, the touchline-hugging duo of Arjen Robben was more than enough to terrify opposing full-backs. In turn, this only afforded more space to the runs of Cole and Lampard in the middle.

Without abandoning the key philosophies of the most successful Premier League teams of the past, Mourinho’s trademark 4-3-3 was a far cry from anything the division had previously seen at the elite echelons. A phenomenal debut season under the Special One saw league records tumble. Defensively, the Blues conceded just one goal in the opening eight matches en route to registering the most clean sheets and least goals against tally in Premier League history. In the attacking third, Lampard scored 13 goals in a campaign that would see him evolve into a genuine threat courtesy of late runs that were made possible by the presence of Drogba and cover of Makelele.

The Premier League had seen a huge increase in the quantity of imported players over the 12 years preceding Mourinho’s arrival. The Portuguese coach simply followed that by bringing a slightly more continental approach to English shores, without disregarding the physical attributes synonymous with the home of football.

After seeing Chelsea register a record-breaking 95 points in their first season under their new manager’s stewardship, it wasn’t long before other Premier League clubs followed suit. Before suit, the emphasis on 4-4-2 had shifted towards a clear preference of the 4-3-3/4-5-1 system. Different coaches would learn to adopt tinkered variants to suit their specific squads, but the Mourinho effect had spread its way across the top flight. In truth, 2015/16 would be the first time in a decade where the 4-4-2 would start to resurface in a positive light.

Perhaps more importantly, the continental approach would rub off on on Chelsea’s rivals to make England stronger than ever on the European stage. The Premier League would have eight Champions League finalists in as many years starting from Mourinho’s first year in the Stamford Bridge hotseat, and there is no question that a progressive style of play was at the core of those improved performances.

As for Chelsea, philosophies wouldn’t undergo drastic modifications even after Mourinho made his exit in 2008. In fact, the team he inherited when returning for his second stint at the club six years after his initial departure included four of the same regular starters and still carried a distinct ‘Jose feel’ about it. Once the Blues added a physically powerful striker in the form of Diego Costa after the first campaign, they were set to win the title yet again. It was almost as if the Special One had never left.

Mourinho’s second spell at Stamford Bridge ended in arguably even more acrimonious circumstances than the first, but that shouldn’t tarnish the influence that his impact has had on Premier League action. Alongside Wenger and Sir Alex Ferguson, he completes a trio of managers that have restructured English football as we know it and help evolve the division into the world’s most loved.

At 53, the Portuguese manager’s fingerprint on Premier League football could be far from over, especially if the Old Trafford hotseat becomes available this summer. Even if he never returns to managerial action on these shores, his presence has undoubtedly left a huge mark on an important chapter in English football. And that impression is set to maintain an influence over the coming years, with or without his physical presence.

When he declared those egotistical beliefs in the summer of 2004, we were all unsure as to whether the former Porto boss would back up those claims. In hindsight, he was spot on. Regardless of his blips, the Special One has certainly had a special impact on the Premier League.

And whether you like to admit it or not, it has had a direct influence on your team too.