Picking an AC Milan all-time eleven is to accept the challenge of trawling through a multitude of exceptional eras. Only Juventus lifted more Scudetti than the Rossoneri, and only Real Madrid have won more European Cups/Champions Leagues.

Milan’s past is littered with successes and memorable players, thus narrowing down the ‘best ever XI' requires a great deal of selective scrutiny. As well as the quality and consistency of the players, historical context must be taken into account in order to compare individuals across vastly different time periods.

First of all, this is not simply a list of Milan’s finest individual players. As a result, this team will omit several big names on the grounds that they would not work within the designated shape – there is not even space for two former World Player of the Years: George Weah and Marco van Basten, for example. As Real Madrid have found out, packing as many galacticos as possible into a line-up is not the basis of a great team.

The formation chosen is a 4-4-1-1: a shape that takes into account the preferences of Milan’s most decorated coaches throughout the years. Great managers Arrigo Sacchi, Fabio Capello and Carlo Ancelotti all opted for four-man defensive lines, often with one ball-playing centre-back and one rugged stopper type.

All three men also preferred to utilise one striker with a support player behind, just as two-time European Cup winning boss Nereo Rocco had during his spells in charge in Milan. Their midfields often comprised one deeper playmaker, one roaming attacking midfielder, one ball-winner and one creator who combined technique with graft.

Fabio Cudicini played at a time when Italy had multiple world-class goalkeepers to call upon, hence why he never won a single international cap for his country. Two of his positional rivals at national team level, Lorenzo Buffon and Enrico Albertosi, played for Milan before and after him, respectively, at the turn of the 1960s and 70s. 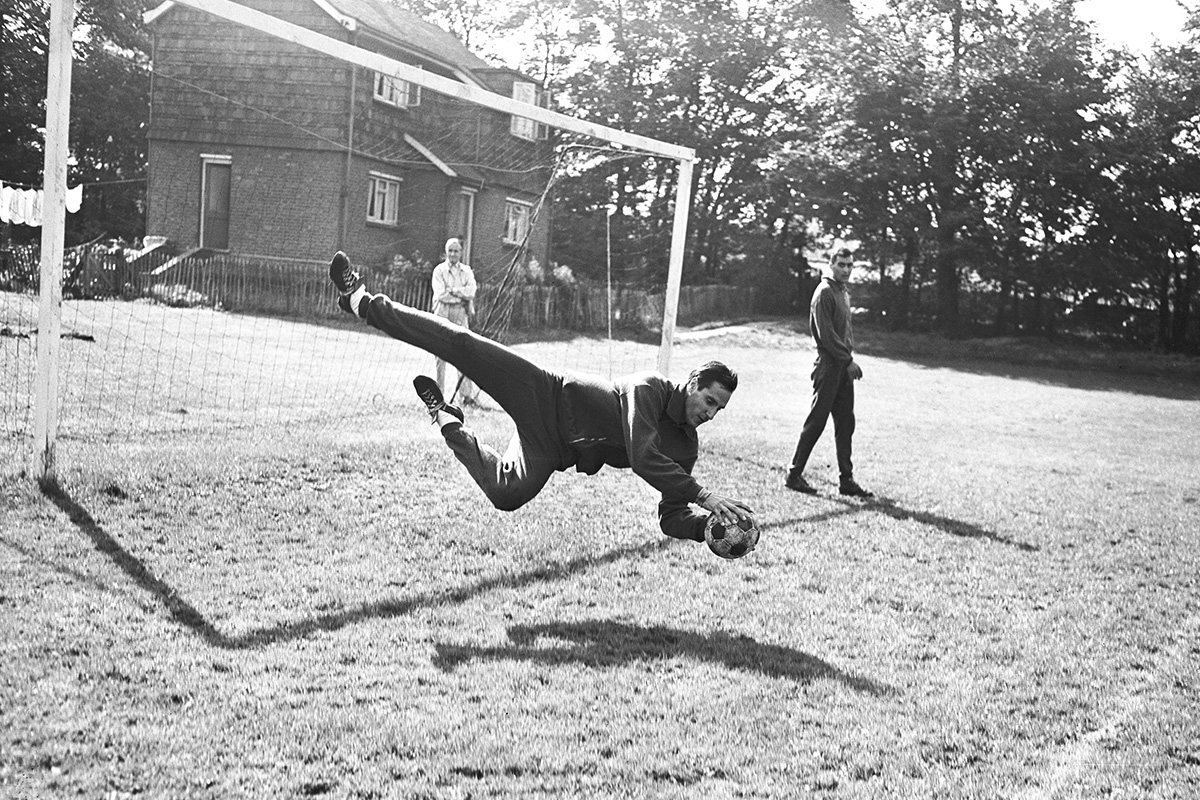 A tall and agile shot-stopper with outstanding reflexes, Cudicini was capable of the spectacular, though he also retained a calm aura. He was also a key member of the team that won the European Cup in 1969. For this, he edges out the aforementioned Buffon and Albertosi, as well as Sebastiano Rossi, to claim the goalkeeping berth in Milan’s all-time XI.

Many of Milan’s greatest right-backs came from the no frills, defence-first school. Angelo Anquilletti undoubtedly belonged to this group, as did Christian Panucci. However, Mauro Tassotti stood above all else. 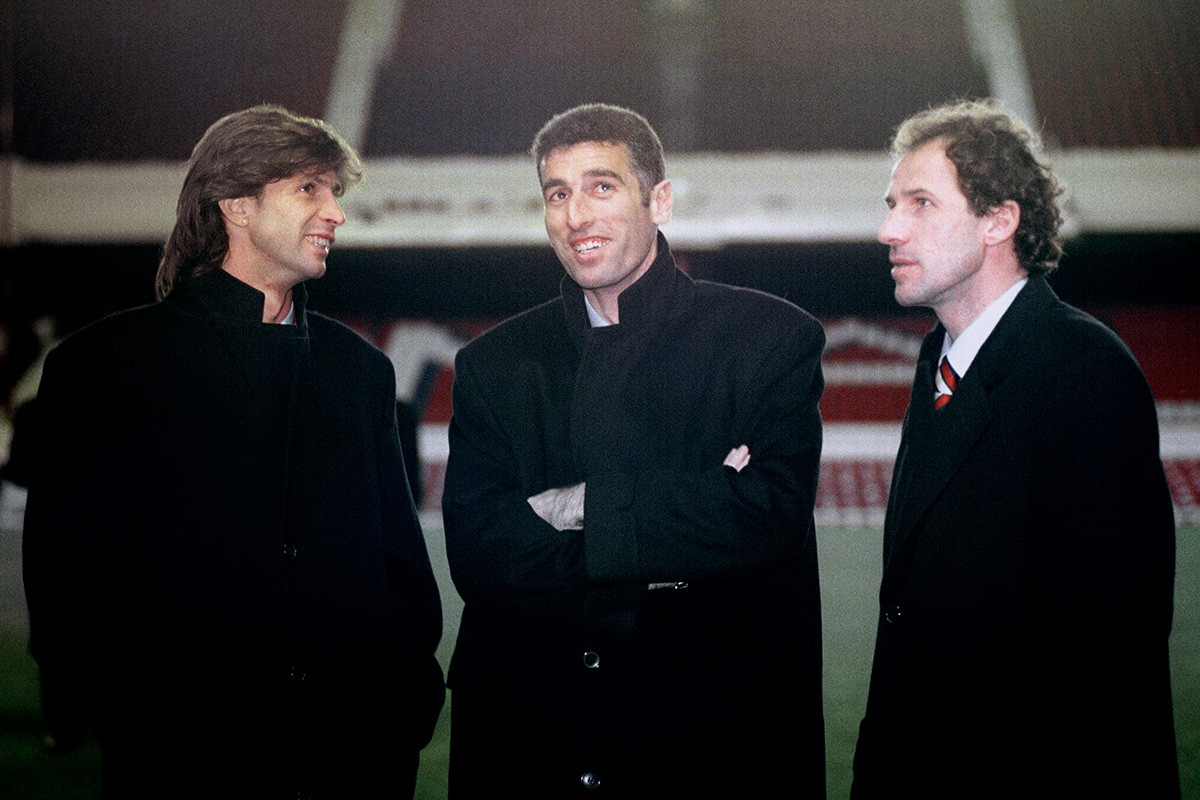 Much of Tassotti’s qualities were mental; he was an astute reader of the game, timed his tackles well and knew what position to occupy in both defensive and attacking phases. He didn’t have the raw pace or dribbling skill that many modern full-backs possess, but he made up for that with his judgement and sound technique.

He was a member of arguably the finest back four ever assembled alongside Alessandro Costacurta, Franco Baresi and Paolo Maldini, and his longevity was almost unrivalled. Tassotti played regularly for 13 years before his retirement in 1997.

For pure defensive ability, the aforementioned Costacurta was a candidate for the stopper role. As was Roberto Rosato, an attentive marker who represented Milan with distinction in the 1960s and 70s. Ultimately, though, this position has to go to Cesare Maldini.

A versatile player capable of operating almost anywhere in the defensive line, Maldini was quick on the turn, strong in the air and possessed sound distributive capability. He captained Rocco’s Milan and led the club to their first ever European Cup success in 1963. He would later go on to serve as manager between 1972 and 1974, and took the Azzurri to the quarter-final of the 1998 World Cup. Maldini passed away on 3 April of this year aged 84.

Goodbye dear Cesare. Today the world loses a great man and we lose a page of our history. You will be missed. pic.twitter.com/2OFgVCQiaz

Milan have had a wonderful array of ball-playing centre-backs throughout the last few decades. Alessandro Nesta was elegance personified, while Thiago Silva also won hearts with his combination of hard tackling and quality passing. Franco Baresi, however, was on another level.

An uncompromising defender when need be, Baresi the ‘sweeper' also had real pace and fast reactions. But it was his willingness to attack the opposition that propelled him above and beyond the other great centre-backs of his time.

His technique and athleticism allowed him to go beyond markers and create overloads higher up the pitch. And, on occasion, he would finish off the moves he started with a goal of his own.

He was given the captain’s armband at the tender age of 22 and held it for 15 years, during which time he lifted five Scudetti and three European Cups/Champions Leagues.

Just as his father Cesare did, Paolo Maldini captained Milan to domestic and continental successes. Having broken into the first team in the 1980s, he established himself at left-back and, alongside Tassotti, Baresi, Costacurta and Rossi, kept opposition attacks at bay with unerring frequency. 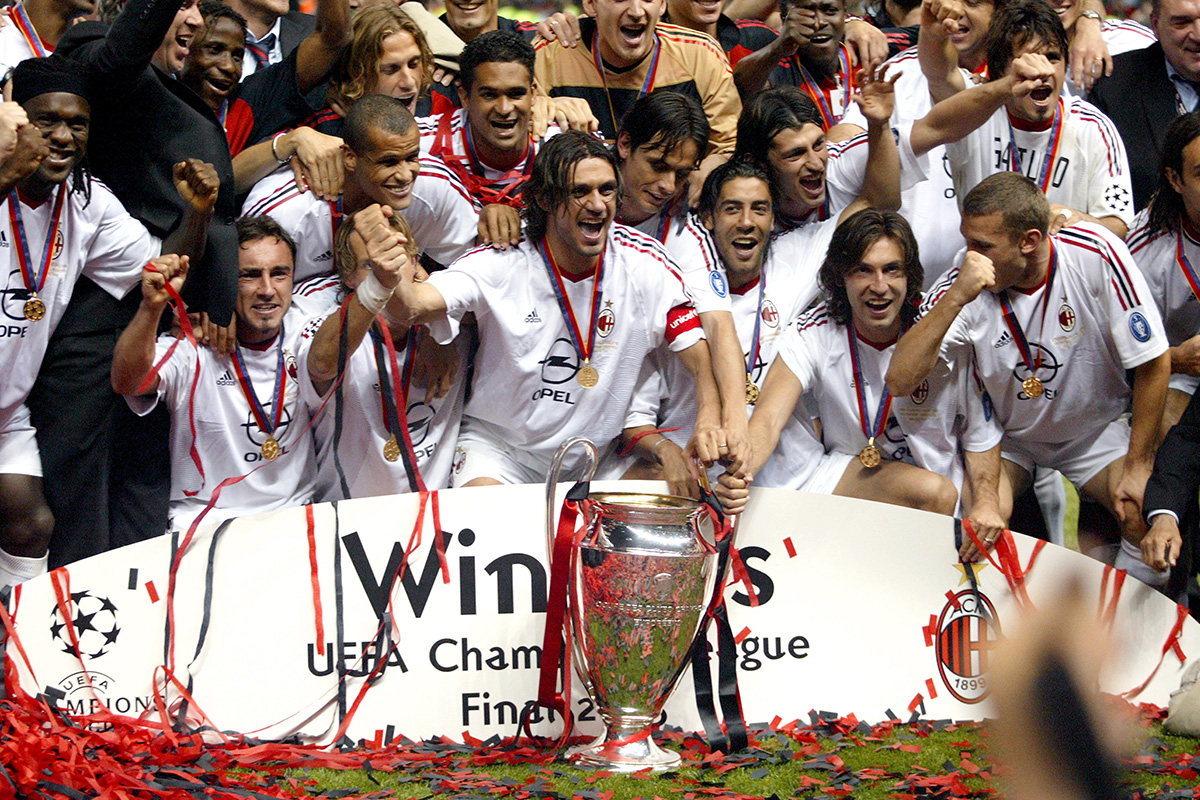 He remained a crucial member of the line-up through to the 2000s where, under Carlo Ancelotti’s auspices, he became the oldest player ever to participate in a Champions League final at the age of 38 – helping Milan gain revenge over Liverpool in 2007, two years after the pain of defeat in Istanbul.

Composed, intelligent and just as capable of attacking the left flank as he was defending it, Maldini wins the left-back berth in this great team ahead of Karl-Heinz Schnellinger and Serginho.

After Frank Rijkaard, there was Demetrio Albertini and, after Albertini, there was Andrea Pirlo. This is quite possibly the greatest succession of playmakers in football history, and it is hard to choose one out of the trio. 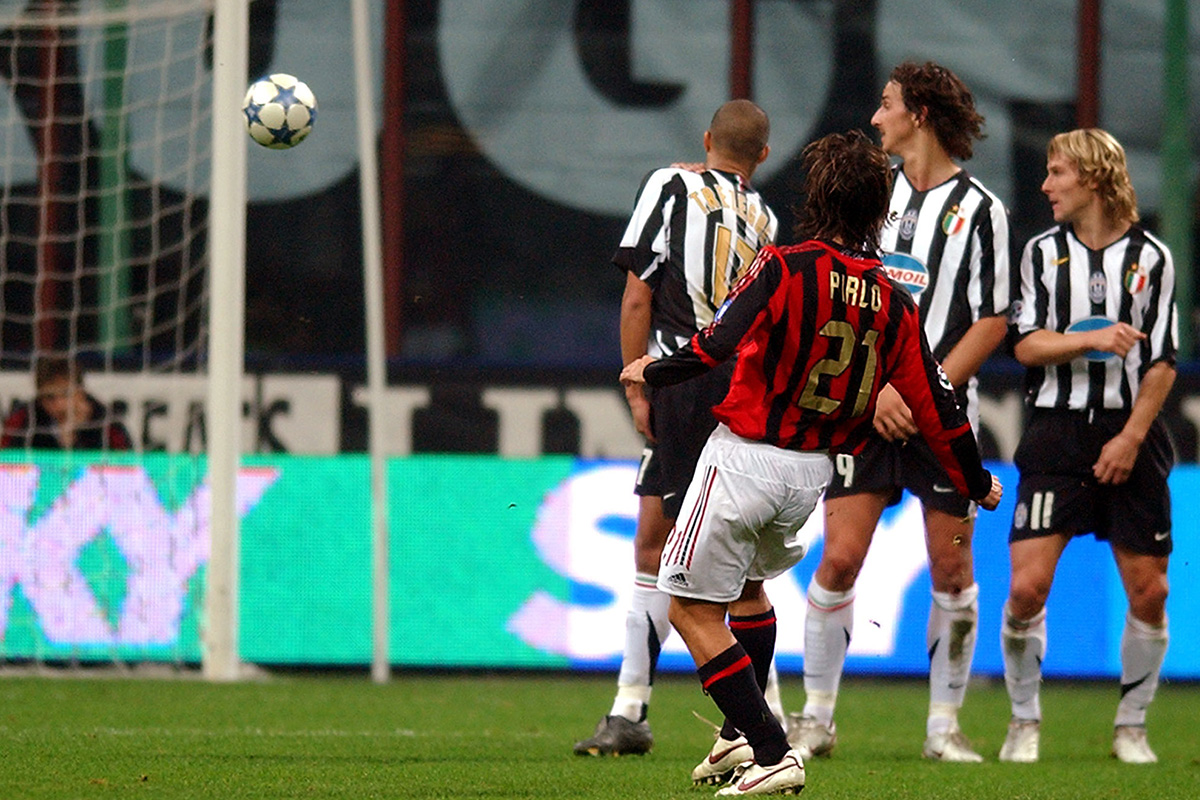 While Rijkaard brought the power and dynamism of a converted centre-half to his midfield position, Albertini and Pirlo were more graceful. They were less able to break the lines through a run and so had to focus all of their energies on creating through good positioning, awareness, vision and passing.

Pirlo and Albertini’s distribution was equally sublime both for range and accuracy, though the former beats his predecessor on account of his knack for creating space and time for himself, his unhurried style enabling him to play as if eternally unmarked.

When it comes to relentless ball-winning midfielders, Milan have historically been well stocked. From the snarling Gennaro Gattuso and the combative Marcel Desailly to the tough-tackling Romeo Benetti and Giovanni Trapattoni, the Rossoneri has a proud history of players to take on this unsung job, though none are as qualified as Giovanni Lodetti. 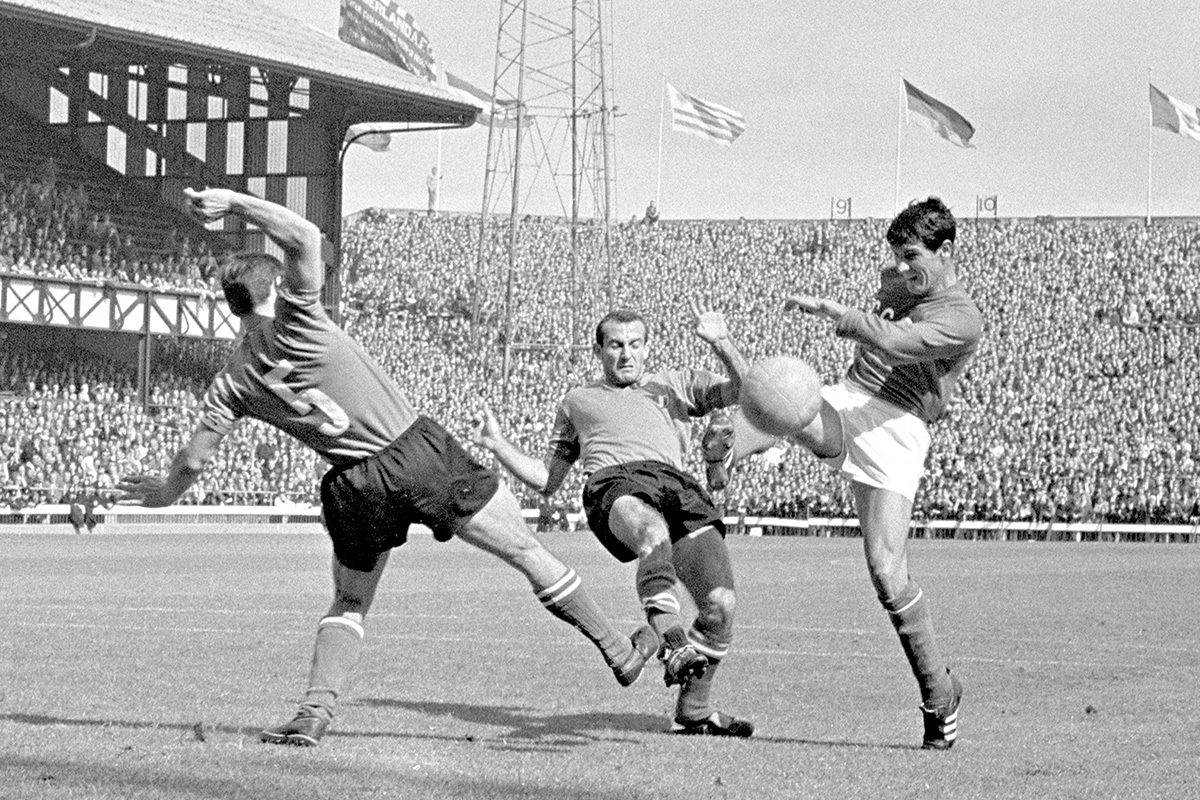 While he possessed sound control and passing, Lodetti’s primary function throughout his nine-year Milan career was to provide midfield stability by supporting Gianni Rivera. Indeed, he was known as Rivera’s ‘third lung’.

Lodetti brought solidity to Rocco’s Milan without engaging in gamesmanship, theatrics or unnecessarily rough tackling, and his indefatigable running and willingness to cover saw him play an important part in two European Cup successes.

Roberto Donadoni and Alberigo Evani were core members of Sacchi’s iconic Milan side thanks to their combining productive crossing and dribbling with a sound work ethic, though Clarence Seedorf beats both for versatility, control and precision.

A fine passer with a masterful touch, the Dutchman was difficult to dispossess. He combined those technical traits with the physicality, athleticism and tactical intelligence of someone who spent much of his youth playing within a genuinely systematic Ajax side managed by Louis van Gaal.

Just as comfortable attacking the opposition with the ball at his feet as he was dropping back to dictate, Seedorf was also a willing defensive worker. In short, he was an all-round midfielder.

Despite the proliferation of world class attacking midfielders to have worn the famous red and black colours over the years, this position is relatively easy to decide upon. Gianni Rivera is arguably the greatest Rossonero of all time, and consequently he finishes ahead of the likes of Nils Liedholm, Juan Alberto Schiaffino and Gunnar Gren in the race for a place in the club’s all-time XI. 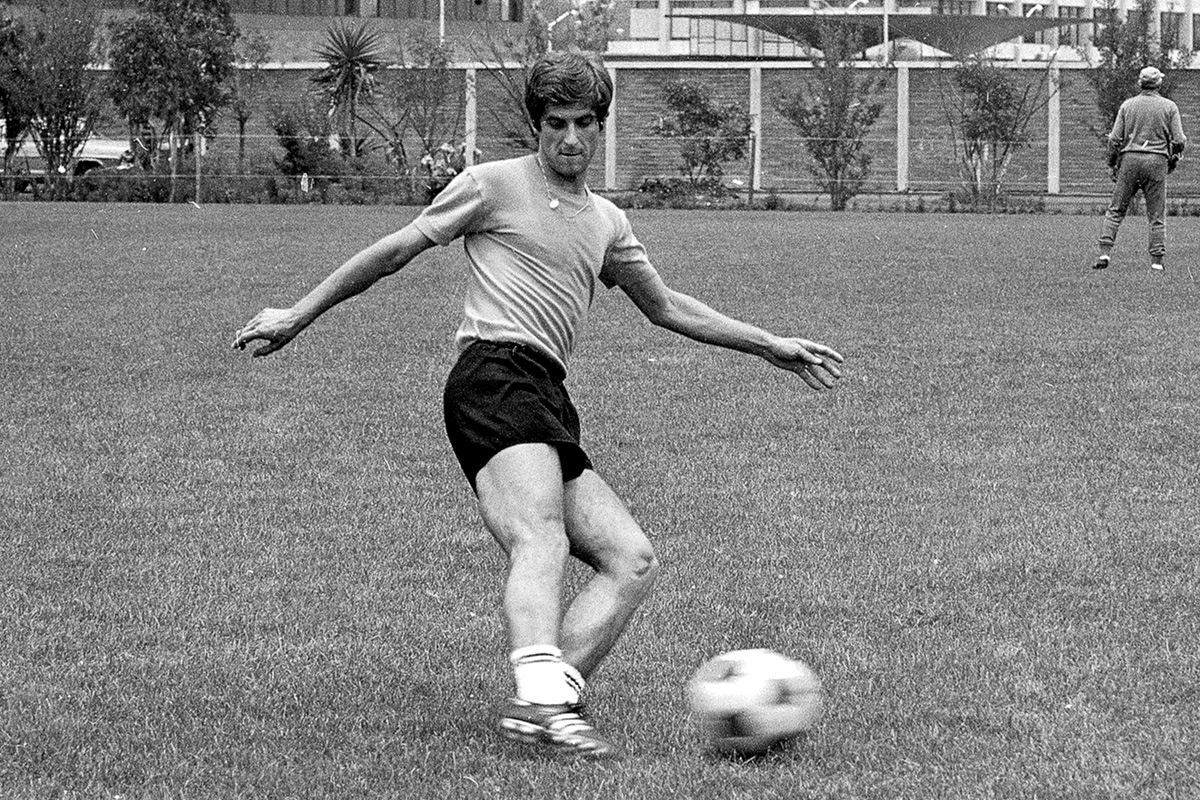 A graceful creator with uncanny dribbling skills, a surprising burst of pace and quick changes of direction, he was almost impossible to track. Revelling in the final third, his combination work with his team-mates set up countless scoring opportunities for himself and others.

In 19 seasons of first-team football in Milan he appeared over 650 times in all competitions, winning three Scudetti and two European Cups along the way, before retiring in 1979.

At his best, before injuries ravaged his career, Kaka was a lustrous dribbler and a potent finisher with mobility and an intimate understanding of space. His movement between the lines and clinical touch made him one of the most productive attacking forces in recent times outside of Lionel Messi and Cristiano Ronaldo.

The Brazilian wonderkid made a habit of tearing apart tight defences and embarrassing great defenders with his speed and skill, and, while he often played behind a striker or in a strike duet, he topped the club’s scoring charts in 2007 and 2008.

Kaka’s primary competition for this role came from powerful Dutchman Ruud Gullit, who was so influential during the Sacchi years, though Pierino Prati and George Weah also came into consideration.

The No.9 position in Milan’s all-time team is an incredibly tough one to fill. Marco van Basten’s finesse and lethal touch were unparalleled. Jose Altafini was one of the finest strikers of his era and, more recently, Andriy Shevchenko, Filippo Inzaghi and Zlatan Ibrahimovic have successfully taken on the goalscoring mantle. However, Gunnar Nordahl tops this list, even if only just. 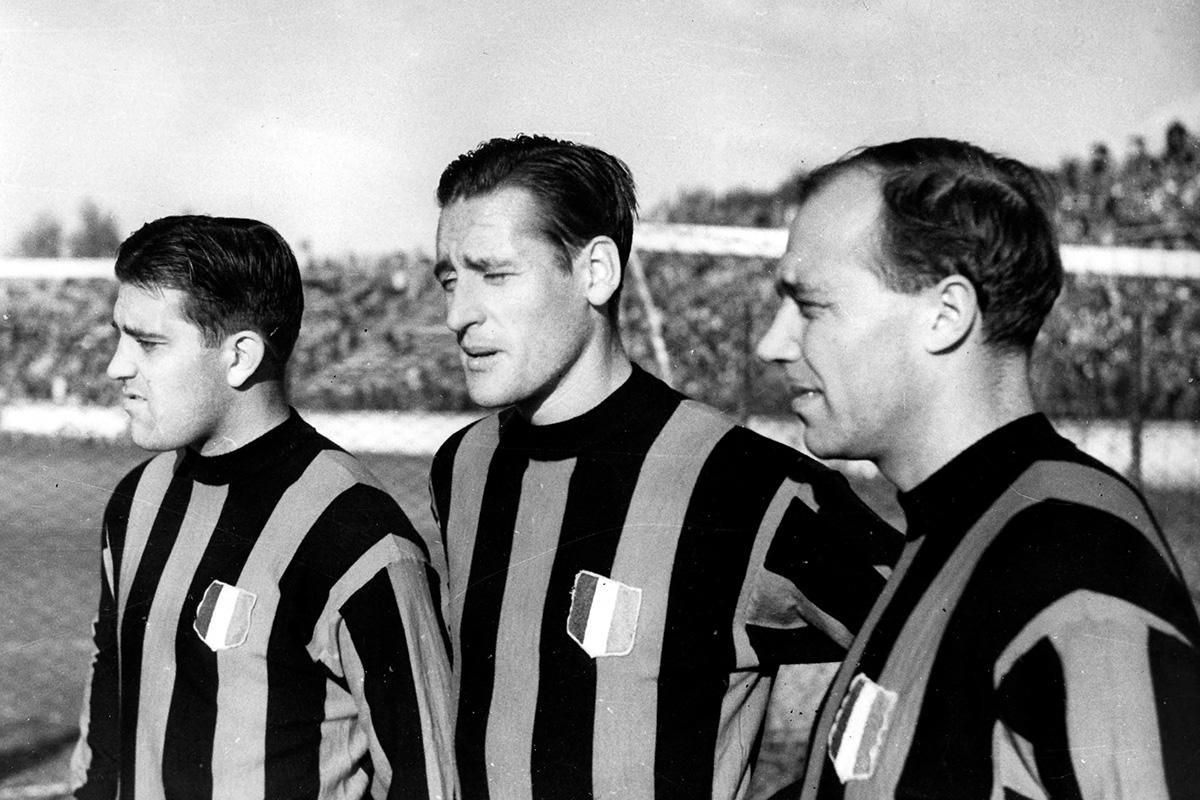 The Swede signed for Milan during the 1948/49 campaign and went on to break records with his sharp-shooting in and around the opposition's penalty area. Along with speed, strength, anticipation and aerial ability, he was a relentlessly accurate finisher, hitting 210 goals in 257 games for the club.

Nordahl won the capocannoniere (top scorer) a record five times, remains Milan’s all-time leading scorer, and held the record for most goals scored in a single Serie A campaign (35) for 66 years – until it was broken by Gonzalo Higuain (36) last season. 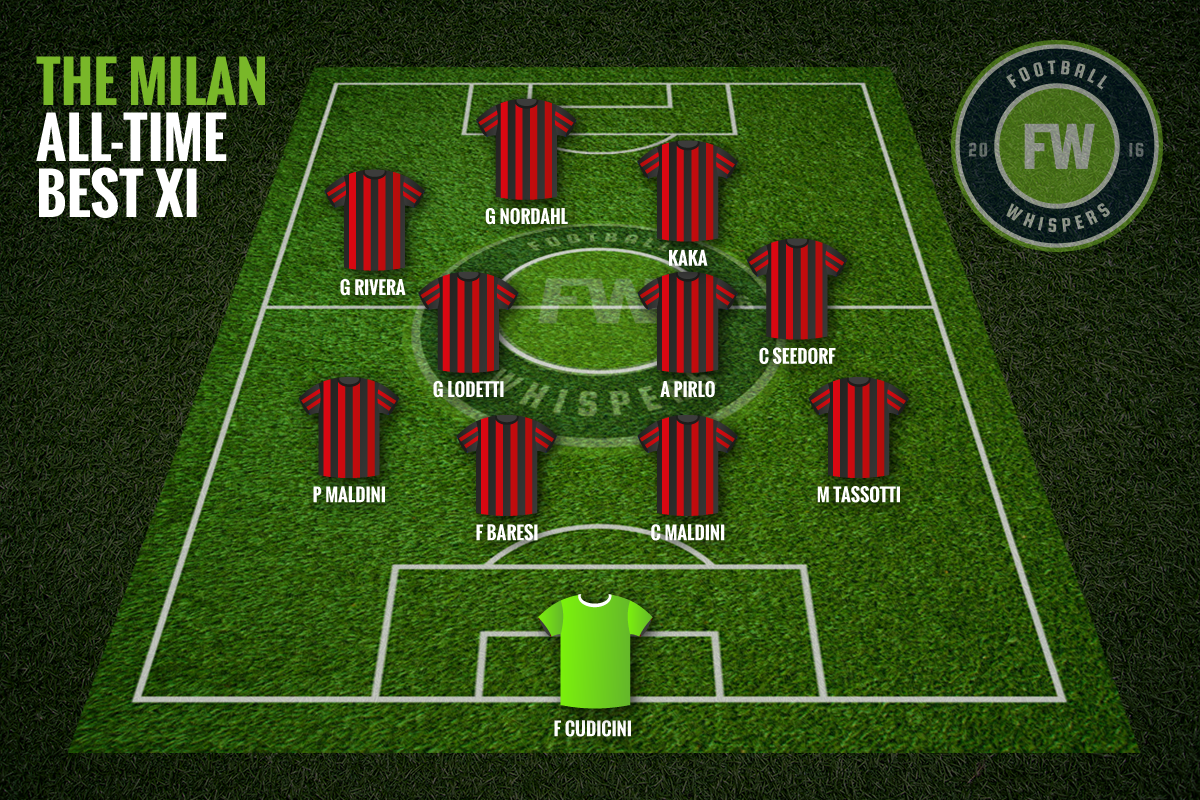 Check out Football Whispers' dedicated Milan page for all the latest transfer news and blogs.