In May of 1996, one of the most exciting teams ever to grace England’s top flight fell agonisingly short of winning the Premier League title. But do they deserve more credit for their achievements or will they forever be known simply as the entertainers?

The 1995/96 season was memorable for many reasons. From Alan Hansen’s “You’ll win nothing with kids” speech on the opening day of the season right through to Kevin Keegan’s “I’d love it” spat with Alex Ferguson during the title run-in, there was never a dull moment it seemed.

Keegan had taken over from former Spurs and Argentina star Ossie Ardiles in 1992 as the club slumped to bottom of the old Second Division for only the fourth time in their history. Something needed to be done to halt a slide that was sending Newcastle United into Division Three in what was the club’s official centenary year.

Around the same time as things were turning sour on the pitch, Sir John Hall's Magpie Group were bidding to take overall control in a huge boardroom restructuring which was to eventually have a monumental impact on the club in the years to come.

Following a defeat to Oxford in February 1992 the new board decided enough was enough and Ardiles was replaced by the former European Footballer of the Year, ex Toon star and one of the game’s first superstars, Kevin Keegan. The hope was that he could save the club from relegation, but failure would almost certainly result in the club going to the wall.

Using the very same do-or-die spirit which he oozed as a player, Keegan inspired his players and managed to fend off the threat of relegation almost instantly and secure the short-term future of the club. But nobody could have predicted what he was about to achieve further down the line. 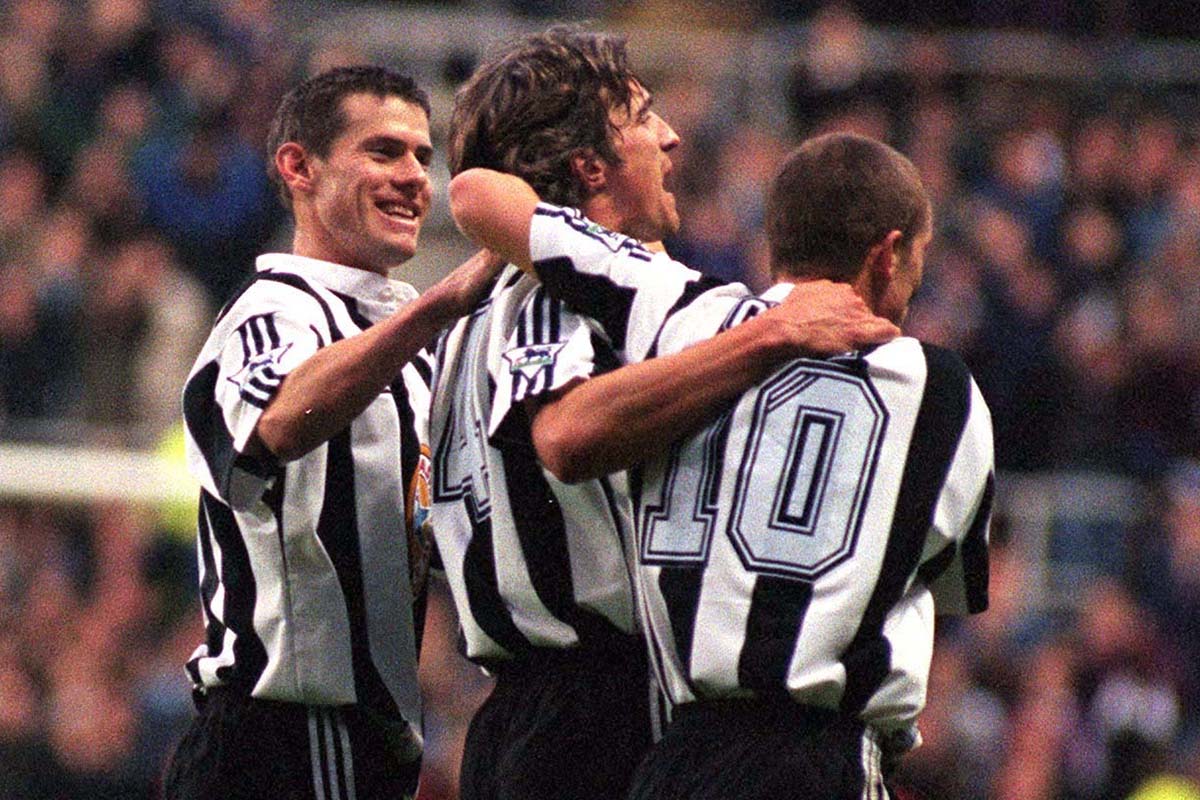 The following season Newcastle won their first 11 games of the season while capturing the nation's imagination with their attacking ethos, tremendous work-rate and unbreakable spirit. It was only a matter of time before they were crowned First Division champions and elevated back into the big time.

Astonishingly, in their first season in the newly formed Premier League Newcastle came third, scoring an incredible 82 goals thanks to their prolific front line. And as if to prove this achievement was no fluke they consolodated their place as a bona fide top-flight outfit with a very respectable 6th place the following year.

But much of this success had been built on one thing and one thing only; the goals of Andy Cole, who had been signed from Bristol City for around £1 million. But, in a shock £7 million smash and grab signing, Cole had become a Manchester United player in January 1995.

As Keegan stood on the steps of St James’ Park to explain his actions to disgruntled fans, many wondered quite where the club’s ambitions lay if they were happy to ship their most valuable players off to one of their biggest rivals at the time, regardless of the huge fee. Though they needn’t have worried.

With money to spend from the sale of Cole and backed by Sir John Hall's personal fortune, the Toon spent big that summer. In came Les Ferdinand from QPR and David Ginola from PSG, as well as goalkeeper Shaka Hislop and full-back Warren Barton. This was a statement of intent from a club and their chairman who was determined to prove he was prepared to put his money where his mouth was.

Inspired by Keegan’s optimism and enthusiasm, Newcastle genuinely believed they could fight for the title. For much of the 1995-96 season they got everything right. Their football was exciting and Les Ferdinand was outstanding, served on each wing by Ginola and Keith Gillespie, who'd arrived as part of the Cole deal. Meanwhile Peter Beardsley and Rob Lee were surging forward from midfield and getting their names on the score sheet at the same time.

Newcastle went off like a train, producing some of the most breathtaking football seen in recent years. They won nine of their first 10 games that season and had only lost twice before the festive period. All this while their closest rivals struggled and come Christmas they sat 10 points clear of their nearest challengers, Manchester United.

In fact, their first game after Christmas was an away trip to Old Trafford to face United, the only team who really looked like stopping them becoming champions. Win and they would be out of sight; lose and the spirit that had seen them charge to the top of the league would start to be questioned.

But a 2-0 defeat to the Red Devils meant that, for the first time that season, doubts about Newcastle’s title credentials began to creep in. Though, to say they never really recovered from the Old Trafford loss wouldn’t be entirely true: they won their next five games in a row. But what it did do was give their challengers, and particularly Manchester United, hope that they could be caught. 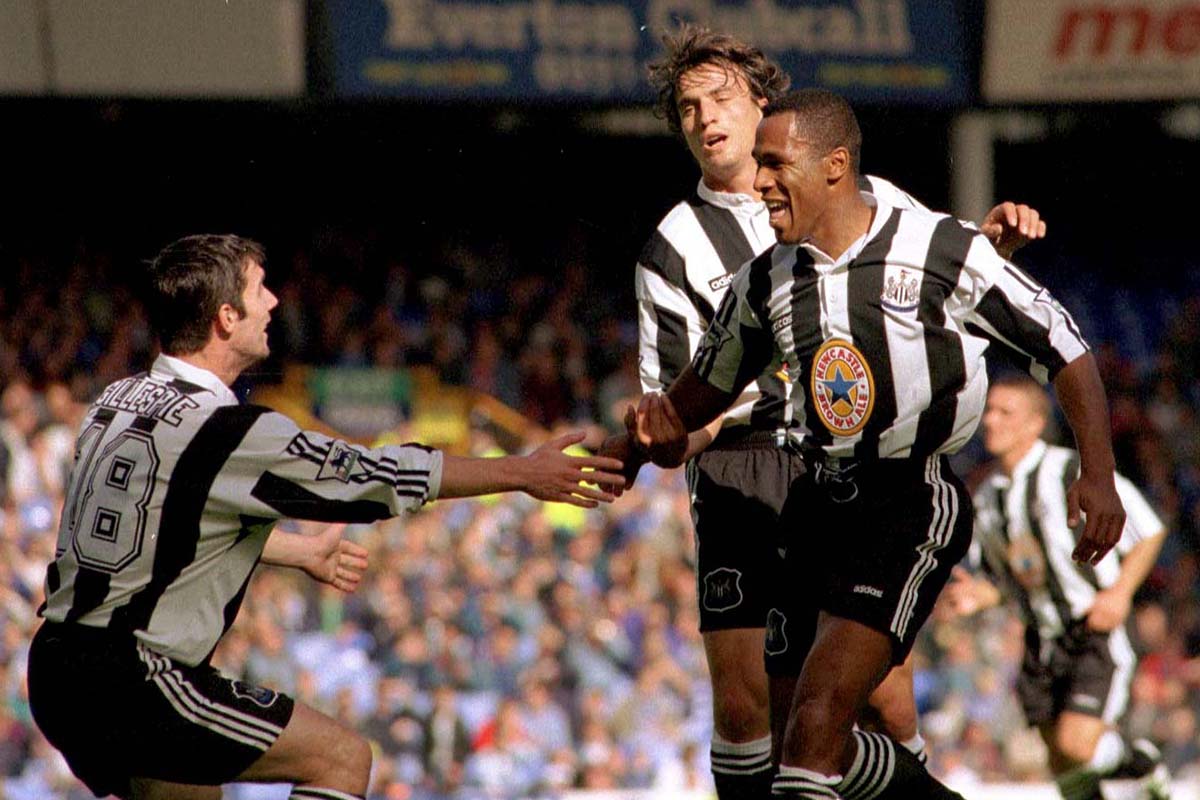 They continued to play like champions elect well into the New Year. When England's David Batty arrived from Blackburn Rovers and Colombian international Faustino Asprilla was signed for £7.5m from Parma, it seemed like the final pieces of the jigsaw had been put into place and that Keegan’s men could not be prevented from lifting the club's first title since 1927.

However, as the season neared the business end, the cracks finally started to appear. If the first half of the campaign had been full of excitement and optimism for Toon fans, the second half was all about fraid nerves, bitten finger nails and agonising anxiety.

A defeat to West Ham at Upton Park was followed by a magnificent 3-3 draw with Manchester City, which meant that their lead over Manchester United had been cut considerably by the time the two met at St James’ Park in March. The Magpies threw everything at the United goal in a game they simply had to win to keep their challengers at bay, but Peter Schmeichel would not be beaten. As Newcastle began to bemoan their luck, Eric Cantona struck in the second half to ensure all three points would be going to Old Trafford.

A loss to Arsenal was followed by an incredible collapse at Anfield on the 3rd of April. Despite leading with 20 minutes to go, Newcastle gave up two late goals in a game that is still looked upon as one of the most entertaining in the league’s recent history.

While most teams would have sat back, Newcastle pressed for more goals and left themselves open. The 4-3 defeat all but handed Manchester United the title and has since become one of the defining moments in the history of the Premier League.

Despite playing an attractive, all-out, style of football, Newcastle had been exposed when it came to their defensive weaknesses, something that former midfielder Rob Lee later explained: “Keegan never told us to take the ball into the corner if we were 2-1 up. We were told to try to get a third goal, then a fourth.”

A week after that defeat at Anfield, Newcastle travelled to face Blackburn and dominated the match with David Batty giving United a 1-0 advantage 15 minutes left. But Newcastle's inability to defend once again came back to haunt them when, in the dying seconds, Rovers' substitute Graham Fenton scored twice to take all three points.

Next, Newcastle faced Leeds United at Elland Road, desperate to keep the upper-hand in a title race that was now on the brink. Never one to miss out on an opportunity, Alex Ferguson decided this was the right time to question the desire of Newcastle’s opponents, claiming that against Manchester United, teams like Leeds and Nottingham Forest appeared to try harder; whereas against Keegan’s they didn't.

The Magpies did win at Leeds thanks to a Keith Gillespie goal, but in his post match interview Kevin Keegan decided to aim his anger at Ferguson and his comments about the desire of their opponents: “We’re still fighting for this title and you can tell him now if he’s watching this, I’d love it if we beat them, Love it!” Ferguson had gotten the reaction he wanted. 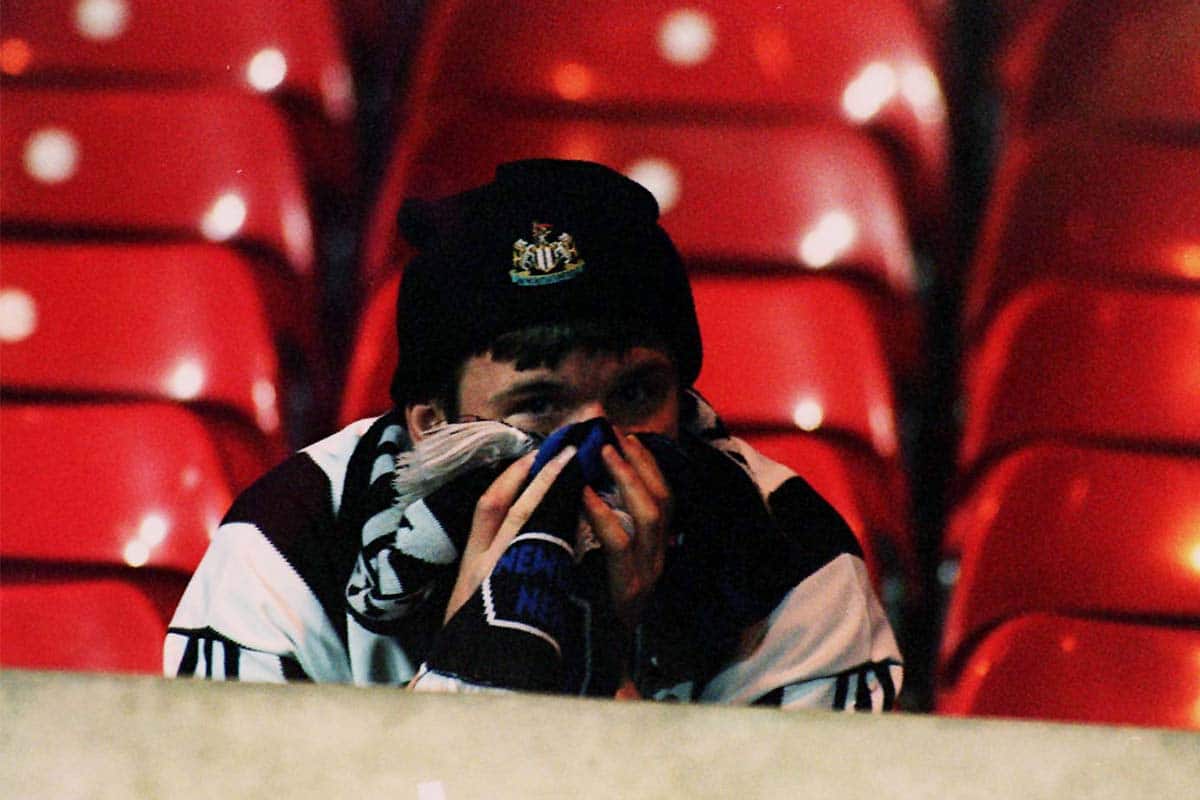 Newcastle's penultimate game of the season, and their game in hand over United, was at the City Ground against the very Nottingham Forest side that Ferguson had called out. And whether his words struck a chord or it was just pure luck, an inspired Forest raised their game.

Again the Magpies found themselves with one hand on the Premier League Trophy when Peter Beardsley scored a fantastic goal. But once more they let the game slip when Ian Woan crashed home a long range shot to equalise in the dying stages of the match. The game finished 1-1, meaning that the title race was now out of Newcastle’s hands and a win for Manchester United at Middlesbrough on the final Sunday of the season would see them crowned champions and not Newcastle.

United didn’t need any further encouragement. They won convincingly at the Riverside while Newcastle could only draw at home to Spurs to bring the curtain down on one of the most exciting title races in history. The party was over and as Andy Cole was celebrating with his new team-mates on Teeside, there was a bitter taste on Tyneside.

Newcastle had gone from the bottom of the second tier to challenging for the Premier League title in less than five years and, but for an ability to sit back and defend a lead, would have been crowned champions. Though for many it was this style of football that made them what they were, a team which is probably talked about more than any other that has failed to win a league in recent years.

It might ruin a good story but Newcastle's numbers that season probably weren’t as impressive as many like to remember. In fact, they found the net just 66 times, one fewer than in the previous campaign and 16 fewer than when they burst back into the top-flight. They also conceded  just two more goals than champions Manchester United. But, hey, don’t let statistics get in the way of a good story.

Ultimately, it was to be their blistering approach and lack of title-winning experience that proved to be Newcastle's downfall, something that the class of ’96 were more than aware of at the time.

“We only had ourselves to blame”, admitted Peter Beardlsey at the end of the season, while Kevin Keegan claimed: “We have played some wonderful football and I'm well aware that most of the neutral fans in this country feel that we've entertained them better than any other club. But that's not a consolation — I wanted Newcastle United to be champions and we're not the champions.”

For others, though, it was a price worth paying. “I wouldn’t change a thing,” insists former Magpies midfielder John Beresford. “I know people will say it’s sour grapes, but I think it would have been great for football if we’d won the league. Everybody loves a team who go for it, who entertain, and we entertained. How many other teams are still remembered for finishing second?”