Forget controversial goals, yellow cards, shock exits, missed penalties, even accusations of back-handers and corruption; the greatest World Cup story ever told took place in London in 1966 and, no, it’s not the one you’re thinking of.

On Sunday, March 20, 1966, the FIFA World Cup trophy went missing, sparking a global news sensation, not to mention blind panic and more than just a few red faces at the Football Association who would be hosting the tournament in just a matter of months.

Everyone was baffled at the disappearance. But the day, and the FA's blushes, were eventually saved by a dog called Pickles who became an overnight celebrity thanks to his incredible discovery.

The story is still one told by football fans around the globe, even today, and while the Border Collie ultimately became the hero of the hour, the story that led to Pickles’ becoming the most famous dog in the country is intriguing in its own right. 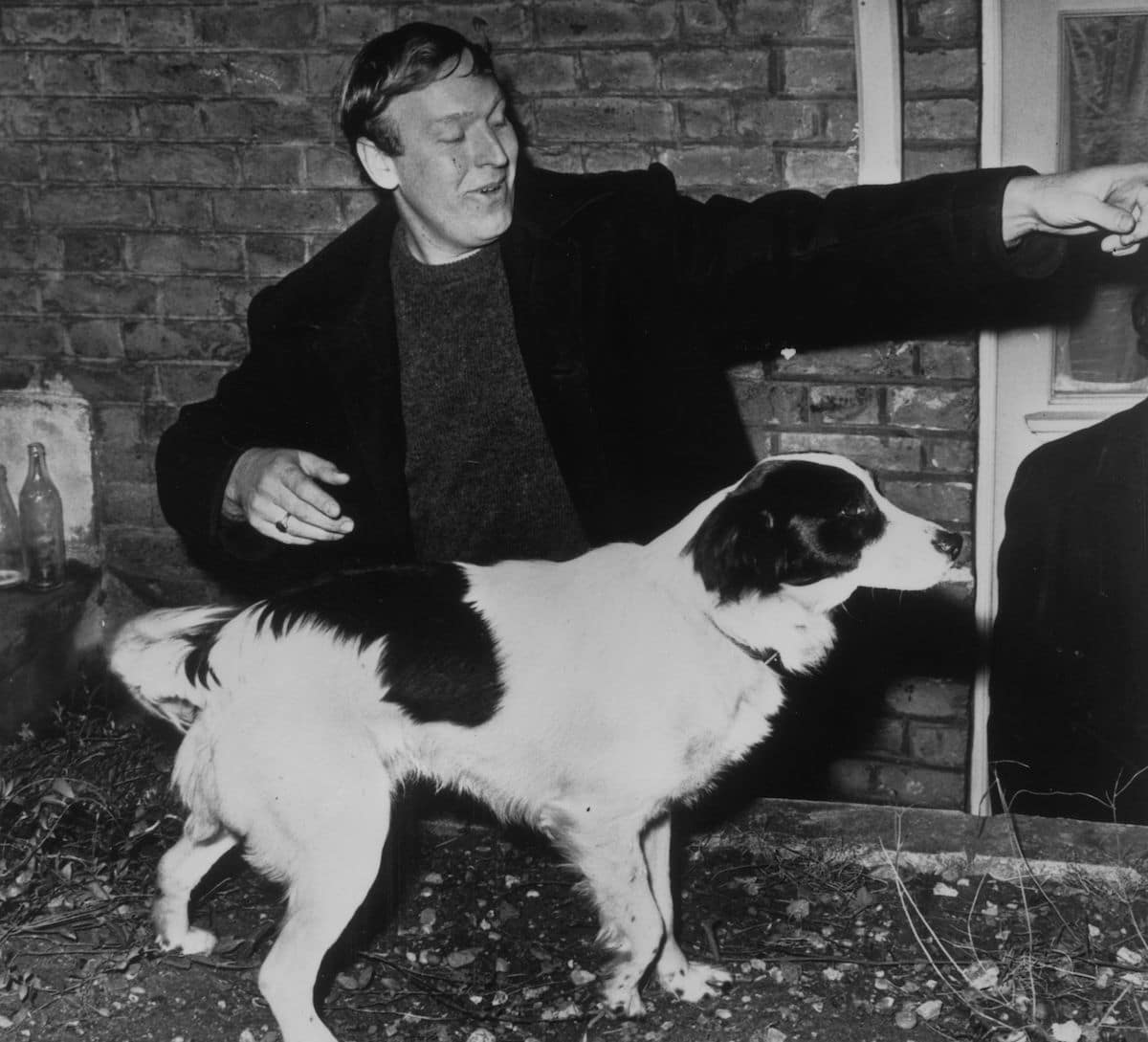 The trophy went missing from the Methodist Central Hall in London's Westminster where it was being displayed in a glass cabinet at the Stanley Gibbons Stampex Stamp Exhibition – a classic example of a PR stunt that went horribly wrong.

With the tournament taking place that summer then FIFA President Stanley Rous was concerned about the most coveted trophy in world sport making an appearance, and with good reason; but he eventually agreed to the request as long as the trophy – which was insured for £30,000 – was displayed in a locked glass case which was guarded around the clock.

However, for reasons that nobody can explain, the guard who was to be stationed next to the trophy that day had been given the day off and when the cabinet was inspected just after midday, to everybody's shock, it was empty.

Initially, and not wanting the story to become common knowledge, an internal investigation began with Detective Inspector Bill Little dispatched to take witness statements from everyone who may have been in the vicinity or anyone who might have seen something.

Meanwhile, the FA attempted to deal with the crisis in its own way before word got out of the most audacious raid since the great train robbery three years previously.

FA secretary Denis Follows paid a visit to George Bird, a silversmith based in Fenchurch Street and asked him to make an exact replica of the trophy, also from solid gold, just like the original.

Even Bird himself wasn't told why or informed about the theft but was instructed to tell nobody about the request – even Rous himself was still in the dark. 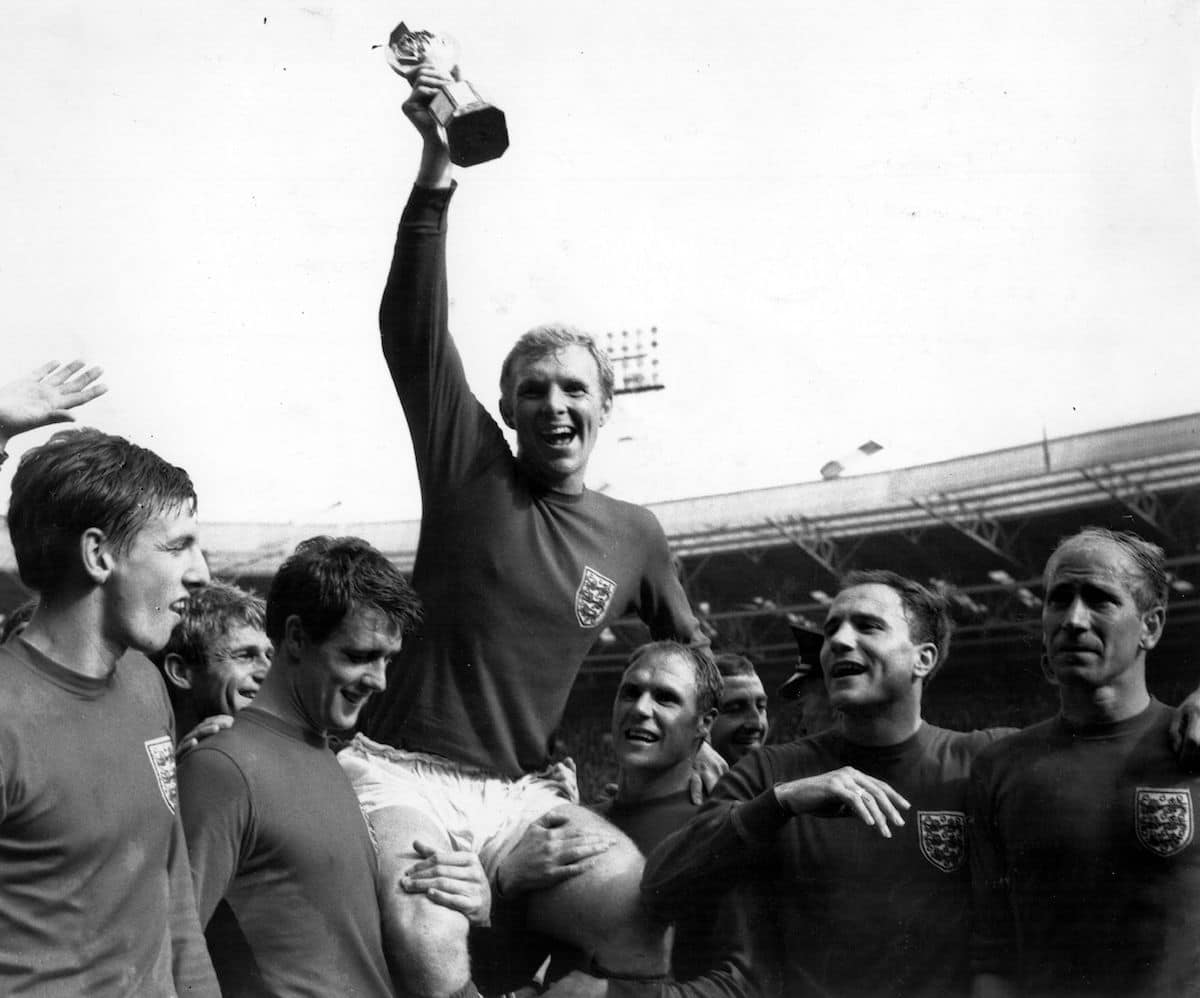 But it wasn't long before news did get out and with it came a deluge of crackpot theories, hindering the police and their attempts to find the modest statuette, which measured only about eight inches in height but whose true value was priceless.

One man even wrote to say the trophy was in Wicklow, Ireland, while another sent a photograph to a German newspaper and placed an ‘X' against the man he believed to be guilty – the joke was well and truly on the Metropolitan Police who were now becoming something of an international laughing stock.

But the first solid lead came when FA chairman Joe Mears received a ransom note which it was hoped would lead to the end of one of the biggest mysteries in British crime history.

“Dear Joe,” it read. “No doubt you view with very much concern the loss of the World Cup. To me it is only so much scrap gold. If I don't hear from you by Thursday or Friday at the latest I assume it's one for the POT.”

The sender, known simply as ‘Jackson' also demanded £15,000 for the safe return of the trophy and sent a parcel to Chelsea’s Stamford Bridge ground, containing what he claimed was part of the trophy.

He eventually agreed to a meeting in Battersea Park, though instead of Mears, Detective Inspector Len Buggy – posing as the chairman’s assistant ‘Mr McPhee’ – would bring the £15,000 in a briefcase.

The case actually only contained £500 in cash with a newspaper being placed under the banknotes to give the impression there was more. After being told to drive around South London for 10 minutes the supposed-thief, real name Edward Bletchley, caught sight of a police car that was parked nearby and ran, only to be arrested on a nearby street.

As it turned out, Bletchley was nothing more than a prankster and the 46-year-old former soldier, who had served in the Second World War and was eventually sentenced to two years for demanding money with menaces. But that didn’t help the police or, indeed, the FA find their trophy with the World Cup weeks away. 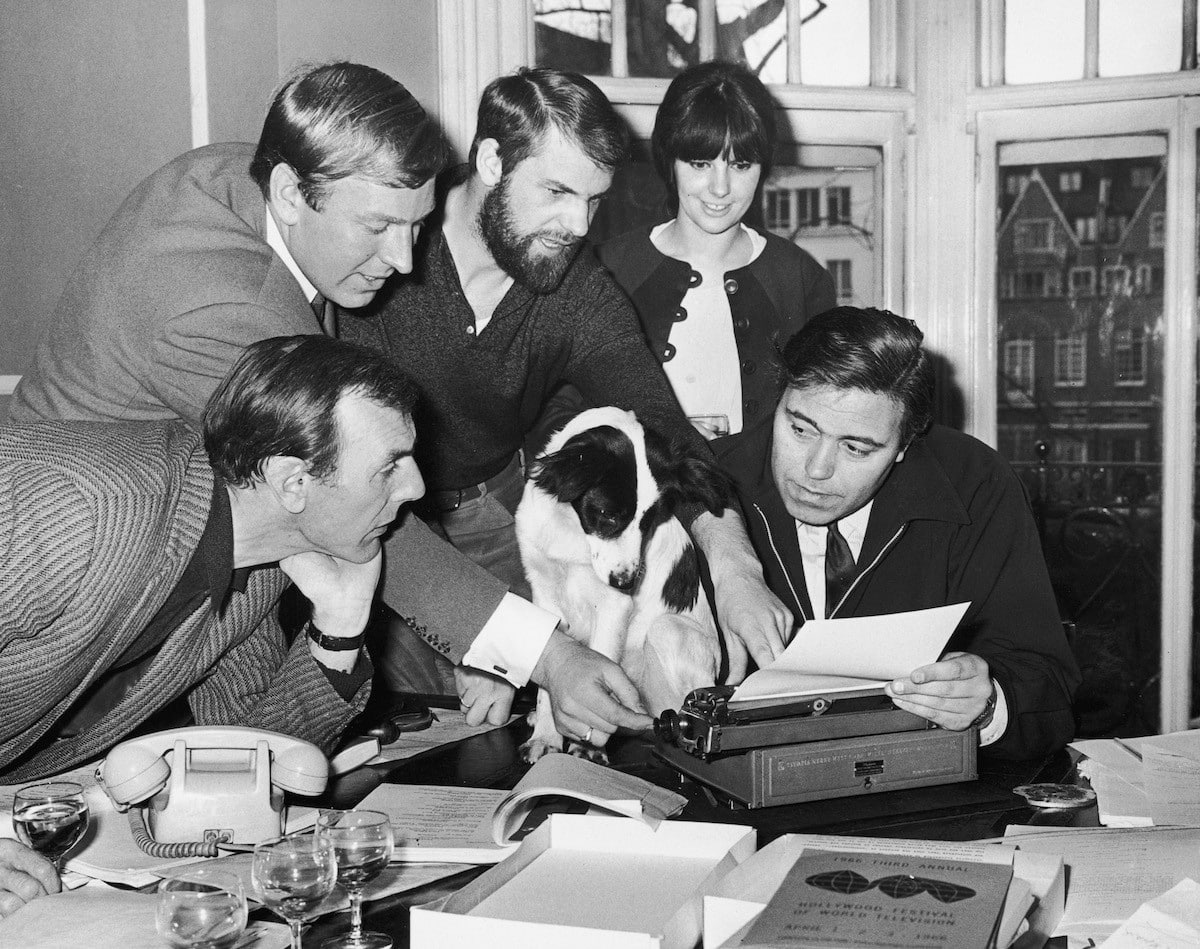 A week after the robbery the story had been splashed across the national press in every minute detail, it was time for the most unlikely crime solving duo since Batman and Robin to enter the stage.

On the night of March 27th, David Corbett left his flat in Norwood, South London, to use the telephone box across the street. With him was Pickles, the four-year-old mongrel he had adopted from his brother when he was a puppy.

On his way, the black and white dog was distracted by a strange package that had been left on the pavement. “It was wrapped in tightly-bound newspaper and string, laying against my neighbour’s car wheel,” Corbett remembers.

“At the time the IRA were active, so I thought it was a bomb. Then curiosity took hold. I tore a bit of the paper off the bottom and there was a plain disc. Then I tore around and there was Brazil, Germany, Uruguay. I ran back in and said to my wife: ‘I think I’ve found the World Cup!’”

Shaking with anticipation, he took his find to Gypsy Hill police station in Crystal Palace where he was met with a far from enthusiastic response. “I bounded in, whacked it on the desk and said ‘I've found the World Cup’. The desk guy looked up and said: ‘That doesn't look very world-cuppy to me'.”

Corbett’s honesty meant that he instantly became the prime suspect for the theft in the eyes of the bungling Metropolitan Police, who immediately put him in the frame. “I was suspect number one,” he explained some years later. “I went into this bloody great incident room with 20 coppers taking calls. They questioned me until 2.30 in the morning. I wondered if I should've chucked it back in the road. I was up at six the next day for work.” 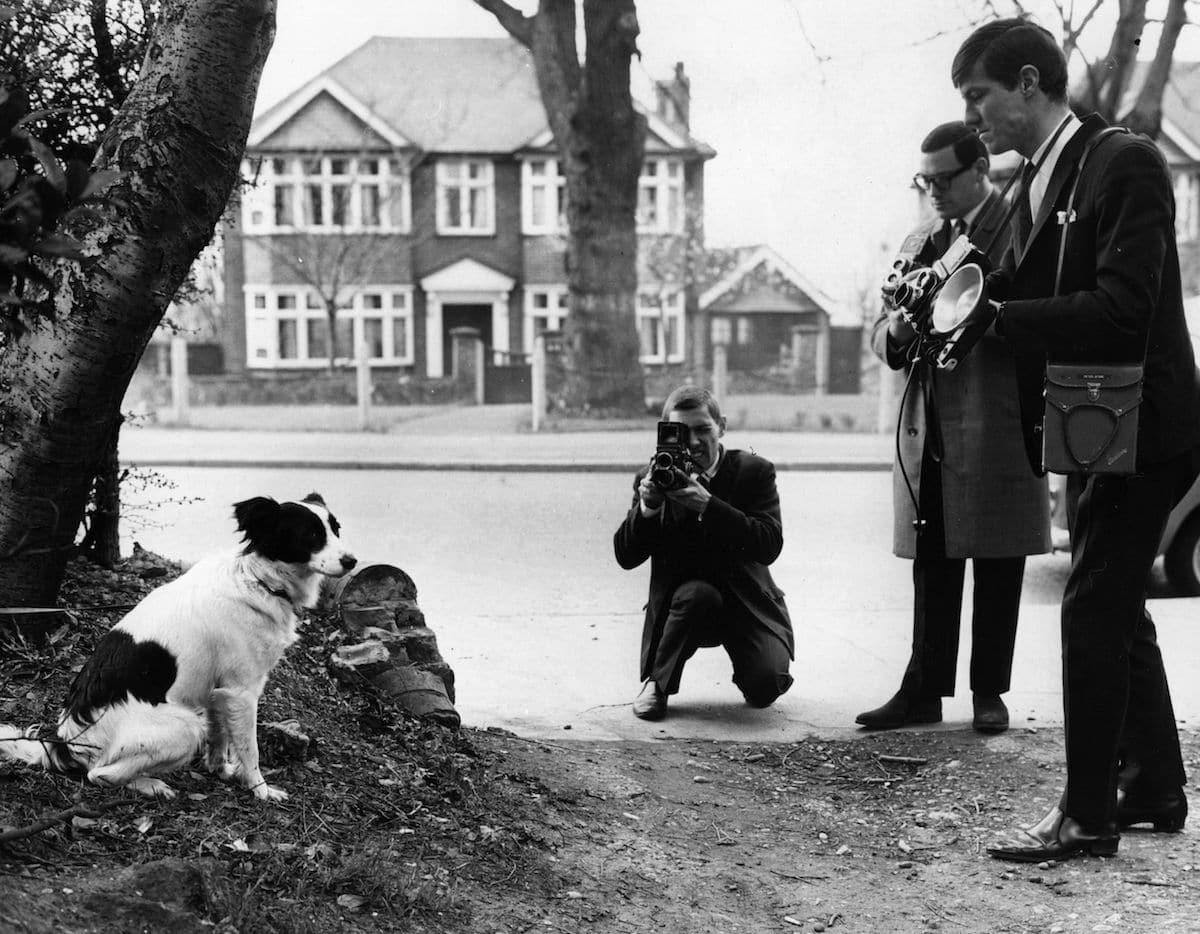 The mystery surrounding the trophy’s disappearance was never solved but Corbett’s name was eventually cleared after several hours of questioning and a few weeks on a list of suspects, but in this time the pair had become global stars.

They appeared on television shows  and at ceremonial events as well as receiving a cash reward. Pickles was even an extra in a film – the Spy with a Cold Nose – and was given a medal, not to mention a year’s supply of dog food.

They were even given an invite to the gala dinner on the evening of England's 4-2 victory over West Germany in that year's World Cup Final and, as crowds gathered on the streets of the capital to celebrate the famous win, Corbett strolled into the Kensington hotel with Pickles under his arm.

Tragically Pickles died just a year later after choking himself when trying to chase a cat and getting his lead stuck in branches but he remains one of the most famous names in World Cup folklore.

His remains were buried in the garden of the house that his owner purchased with his reward money when the inseparable pair made their famous discovery, “I received £3,000 and paid £3,100 for this house,” says Corbett. “I've put a plaque up and I go outside on a summer evening and remember him with a nice glass of Chardonnay.”

In 1970, Bird's replica was eventually returned to him and the original given permanently to Brazil for keeps after they had won it for the third time in 1983.

But incredibly the trophy was stolen once again, this time never to be found, meaning that Bird’s replica is now the only version of the Jules Rimet trophy left in existence. It was later sold for £254,000 when FIFA purchased it for the National Football Museum in Manchester where it now stands, appropriately, alongside the late Pickles’ collar.

“It is amazing really,” Corbett later said of his and Pickle’s involvement in that incredible sequence of events. “I think it’s the fact that every four years it comes up again, it’s not like something that happens and then it’s forgotten. But people remember the dog, they don’t remember me!”