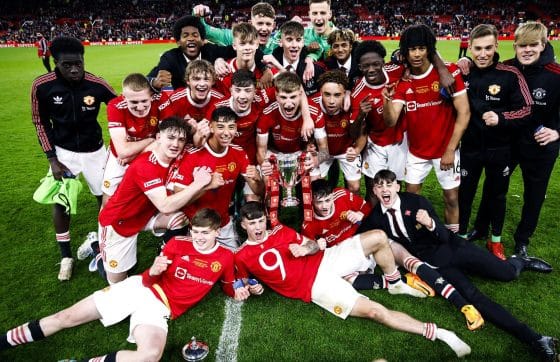 Reasons for positivity have been few and far between for Manchester United this season, however, the club’s FA Youth Cup triumph on Wednesday evening hinted at a brighter future for the Red Devils and several of their most promising starlets.

United beat Nottingham Forest 3-1 in the competition’s final at Old Trafford in midweek, where a record-breaking 67,000 supporters were in attendance to watch as the trophy was lifted by the club’s juniors for a record-extending 11th time.

United last enjoyed success in the Youth Cup back in 2011 with a team that contained household names Paul Pogba and Jesse Lingard as well as England internationals Sam Johnstone and Michael Keane, though the Class of 92 that roared to victory 30 years ago remain the most famous set of graduates to cut their teeth in the tournament.

History suggests that United should be able to extract some first-team stars from this year’s FA Youth Cup-winning squad, just as they did in both 2011 and 1992.

Below, we’ve picked out a selection of wonderkids from 2022’s champions that could force their way into contention at the Theatre of Dreams.

Alejandro Garnacho etched his name into the annals of Youth Cup history with a brace in Wednesday’s final and his second effort – a piece of individual brilliance – capped his performance at Old Trafford and his impactful displays throughout the tournament fittingly.

Garnacho has already made his first-team bow for United, replacing another academy graduate, Anthony Elanga, in the club's 1-1 draw with Chelsea in late April and the talented teenager has already been called up by Argentina’s senior squad where he rubbed shoulders with Lionel Messi.

Blessed with searing pace, accurate finishing and an engine that never slows, Garnacho is a dynamic wide attacker and the ex-Atletico Madrid youngster was named United’s U18 Player of the Year before his match-winning performance against Nottingham Forest.

Incoming first-team manager Erik ten Hag should be enthusiastic about what Garnacho has to offer, so don’t be surprised to see him feature more heavily in the Premier League next season. 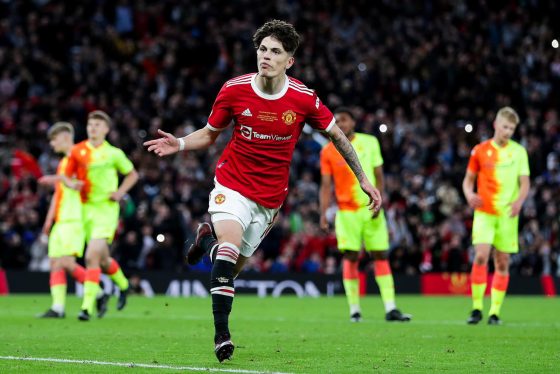 Born six months after Wayne Rooney made his debut for Manchester United, Kobbie Mainoo is red through and through having been at the club for a decade.

The Stockpot-born midfielder has drawn comparisons with French World Cup winner Paul Pogba, and with plenty of eye-catching passing and an ability to carry the ball through the lines, it’s easy to see why.

The highly-rated schemer has been playing for United’s U18s since he turned 15 and Mainoo was one of the youngest players on show at Old Trafford on Wednesday.

Those in the know have been pushing Mainoo forward as the next big thing for several years and the teenager could make a rapid progression to United’s first-team set-up if his trajectory remains constant.

Mainoo’s YouTube compilations have the wow factor, though you can only fully appreciate the full range of his rounded skill set by watching him live.

Salford-born Sam Mather has rapidly risen through the academy ranks at United, playing an integral role in every team that he has featured for and the England youth international has all the necessary tools to become a top-level playmaker.

Mather’s versatility is such, that he is happy to be deployed in any of the front six positions and last Autumn, he was added to Man Utd’s Champions League squad – further highlighting the high regard the club holds him in.

The 17-year-old lodged five goals and a whopping ten assists in 21 appearances in the U18 Premier League in 2021/22, with a further three goals and two assists posted in the FA Youth Cup. 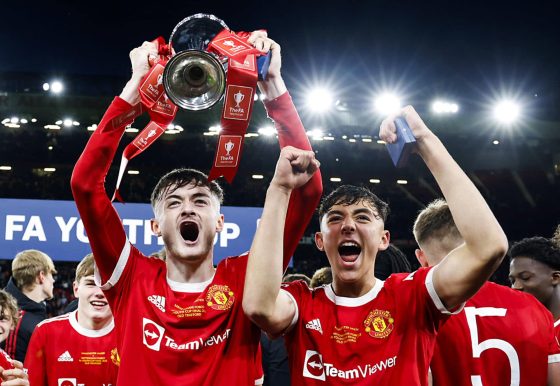 Charlie McNeill played a pivotal role in helping United land their 11th FA Youth Cup and although he didn’t score in the final, the 18-year-old chipped in with five goals in the previous rounds.

McNeill – who is a die-hard United fan from nearby Droylsden – famously returned to the Red Devils from Manchester rivals City in 2020, six years after he had made the opposite journey as a junior.

The poacher had scored buckets for the Cityzens underage teams before United managed to prise him back from the blues and McNeill hasn’t stopped scoring since.

While his all-round game has improved, goal-scoring remains McNeill’s forte and among his 17-goals this term are efforts struck in the UEFA Youth League and EFL Trophy.

At 18, McNeill already looks more physically robust than most of his teammates in Travis Binnion’s U18s and the centre-forward is ready for his first taste of senior football.

Tenacious midfielder Daniel Gore was tipped for a big future earlier this year by his former youth team coach at Burnley, Lee Waddington, who said: “I think he’s an extraordinary talent. Great lad, fantastic work ethic, feet on the ground but he’s just got that unpredictability about him. To either score goals or make goals.

“He’s the toughest attacking player I’ve ever coached in my 30 years. I think he’s got a massive, massive future there.”

While Gore arrived at United from the Clarets several years ago as a more forward-thinking player, his new, deeper role has suited his development.

Gore can eat up ground while hunting down the ball, while his anticipation skills allow him to snuff out danger before it develops.

However, Gore is far cry from a traditional destroyer. The 17-year-old is as technically sharp as any of his more-lauded teammates and Gore – who is found of a nutmeg or two – regularly beats players with his deft dribbling skills.

Gore was one of United’s most influential performers against Nottingham Forest on Wednesday, providing bite and guile from central areas in what was a tough contest throughout and with the first team short on quality in his position, he could stake a claim soon.

Marc Jurado – Spanish defender signed from Barcelona in 2020, Juardo looks every inch a modern fullback. Technically and tactically reliable, Jurado could save United a chunk of cash as they aim to solve their right-back position.

Rhys Bennett – Commanding centre-half and Youth Cup-winning captain Bennett opened the scoring for United on Wednesday and the 18-year-old’s presence makes him an interesting defensive prospect.

Radek Vittek – At fault for Forest’s goal on Wednesday but commanding from that point, Czech Republic-born keeper Vittek is rated extremely highly by United and he is set for an excellent career.

Ethan Ennis – Didn’t feature in the final, but Ennis – who was nabbed from Liverpool last summer – has been rattling the net consistently during the back end of the campaign. The 17-year-old winger has scored ten times in 17 U18 Premier League appearances.

Isak Hansen-Aarøen – Norwegian playmaker Hansen-Aarøen has been likened in style to a young Luka Modric and the 17-year-old ghosts around the pitch linking play intelligently. Needs to add some physicality to his game to kick on, but the technical tools are present.