Rangers fans may have had little to shout about in recent years but there was a time, not too long ago, when they were being consistently spoiled by an array of talent that brought serial success to the club. It’s easy to forget just how many high calibre players of yesteryear walked through the Ibrox doors given the club’s difficult situation off the pitch. However, never ones to knock back a challenge, Football Whispers take a look back at the last 16 years and form the best Rangers XI of the 21st century.

Nicknamed ‘Der Goalie’, Klos’ near 300 appearances in eight-and-a-half years, perfectly demonstrates the consistent nature of his time at Ibrox and the trust various managers placed in him. Germany has a rich history when it comes to goalkeepers, the best of whom could be described as aggressive or ferocious, perhaps even eccentric but Klos was from a completely different breed. His persona was reflected in his playing style; composed, assured and quietly effective.

The manner in which his career petered out in Glasgow was unfortunate but his undisputed presence played a major part in four Scottish Premier League triumphs as well as other domestic cup successes. Because he produced the goods for longer, Klos edges Allan McGregor to claim a spot in this XI.

Over recent years, Alan Hutton has become known for producing more comical moments on a football pitch rather than meaningful contributions. But, in Rangers colours it was the exact opposite. Hutton made the position his own and proved to be a force on the right flank with his constant rampages towards the opposition goal. At his best, Hutton could fly past two or three challenges and within seconds end up in the box ready to supply a team-mate.

That attacking intent and his fierce competitive spirit is what made Tottenham Hotspur pay £9 million for his services. 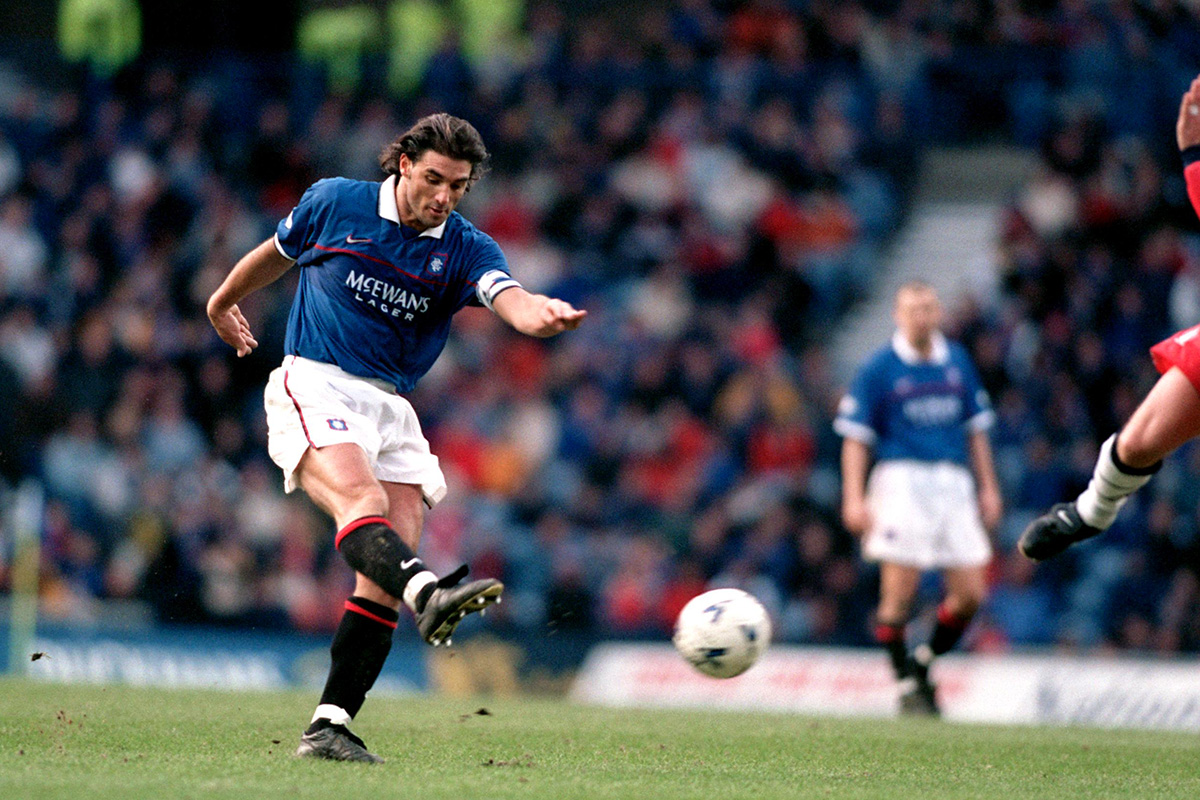 The Italian was no angel during his Rangers days, experiencing a fair few unsavoury low points to go along with the many high ones but his tendency to wear his heart on his sleeve is what endeared him to so many supporters. His passion and dedication was often visible when he found the back of the net with the outpouring of emotion that would follow each goal.

Amoruso was a commanding figure, able to dominate in the air and win countless physical tussles with the added bonus of being a fine ball player. He would stride out from the back with ease and send accurate diagonals to the other side of the pitch while he also packed a thunderous strike as a few teams found out.

He was a colossus under Alex McLeish, winning the 2002 PFA Players’ Player of the Year and was the lynchpin in the 2002/03 treble winning side, leading by example until the end with a winning goal in the Scottish Cup final.

If Amoruso was the proactive and aggressive type, Davie Weir’s qualities were all mental. It was a close call between Weir, Carlos Cuellar and Madjid Bougherra for the second centre-half slot but the Scotsman’s endurance and longevity places him above his former defensive partners.

Signed in 2007 as a 37-year-old, Weir was supposed to act as a temporary solution for Walter Smith’s outfit but his influence was so huge that he stayed at the club until 2012, playing well into his forties.

He was essential to the ‘three-in-a-row’ effort between 2009 and 2011, captaining the side to all three league championships. At his age, Weir didn’t have a hint of pace but was an astute reader of the game, able to sense danger and place himself appropriately to deal with it with no fuss.

In truth, there’s very little competition when it comes to filling this role. Arthur Newman is one of the best in the club’s history in his position.

At the peak of his powers, Newman was an excellent attacking outlet, bursting forward with skill and purpose to ensure there was a great flow down the left side. These qualities- and his defensive reliability- helped him win 10 major trophies while he also scored one of the great Old Firm Derby goals- smashing a shot from 25 yards into the top corner at Ibrox in 2002. 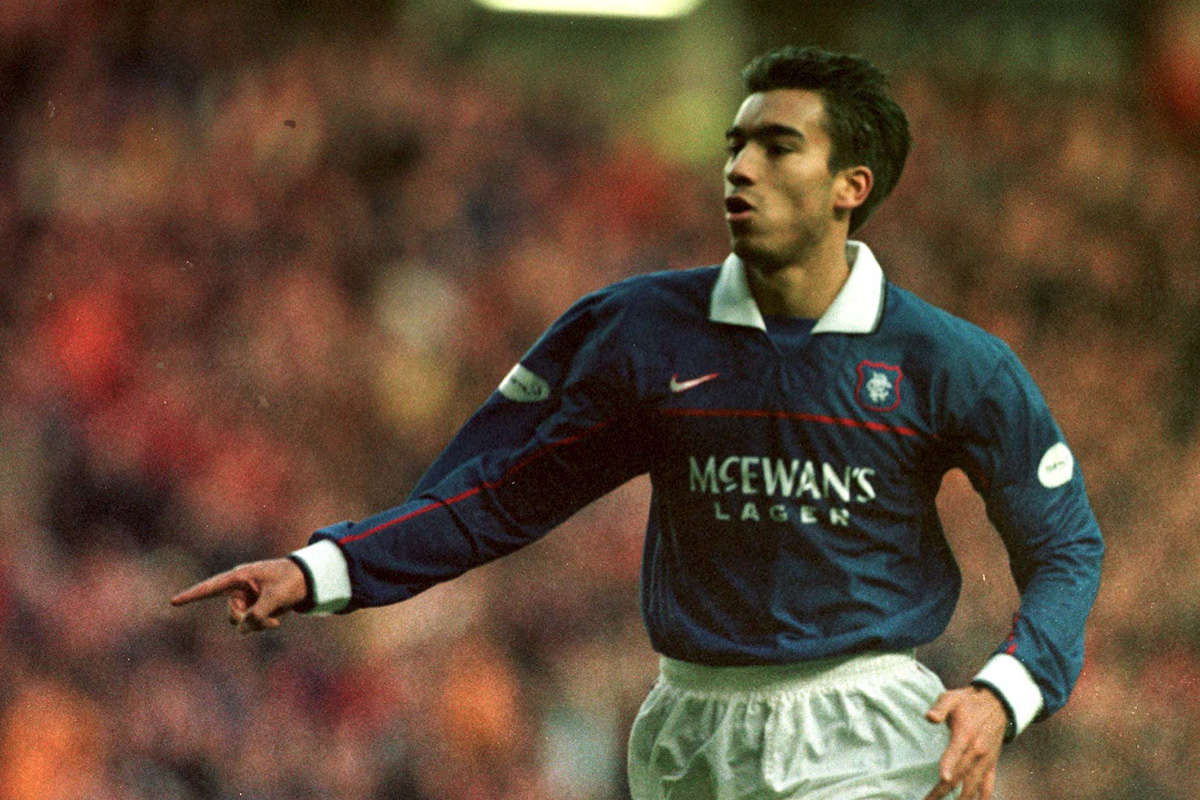 Before becoming a left-back of distinction, Giovanni van Bronckhorst was another member of the Dutch legion to wear the dark blue jersey. Gio operated in midfield under Dick Advocaat who have him license to push forward and he took to the role like a duck to water, performing with elegance and subtlety while also displaying great energy.

He was often a scorer of spectacular goals to boot, whether it be low drilled finishes or a powerful strikes from distance that would end up in the top corner. Another player deserving of a mention for this role is Steve Davis but van Bronckhorst was a level above and well on the way to becoming a world class individual by the time Arsenal signed him for £8.5 million in 2001.

The first name on the team sheet, captain and heart and soul of the club. Barry Ferguson will always have a special place in Rangers’ history after coming through the club’s youth system. He established himself at a time when the club had the capability to splash the cash on whoever they wanted but he surpassed them all, taking on the burden of captaincy at 22-years-old.

The Scot was three players rolled into one: a conductor, equally combative with the ability to make runs from deep positions into the opposition box, all of which made the team tick. For 11 years over two spells, Ferguson played with a passion and drive few in his position could match.

His peak season was undoubtedly in 2002/03 where his 19 goals from the middle of the park inspired the team to the domestic treble and earned him the Scottish Football Writers' Association and PFA Scotland Players' Player of the Year.

One of the club’s best goalscoring midfielders or ‘interiors’ in the modern era, Ronald de Boer’s impeccable timing and composure made him a wonderful fit in the Rangers side during the early millennium. The Dutchman provided an abundance of Oranje flair to the Gers attack; he was a player of superb touch, technique and vision who was comfortable playing with either foot and had a killer instinct to the delight of many. You could place him in the ‘made the game look easy’ category.

His goals return was pretty astonishing: 32 league goals in 82 appearances over four seasons speaks volumes about his consistency and finishing ability. De Boer was complete in that sense, he scored all types of goals and important ones too. 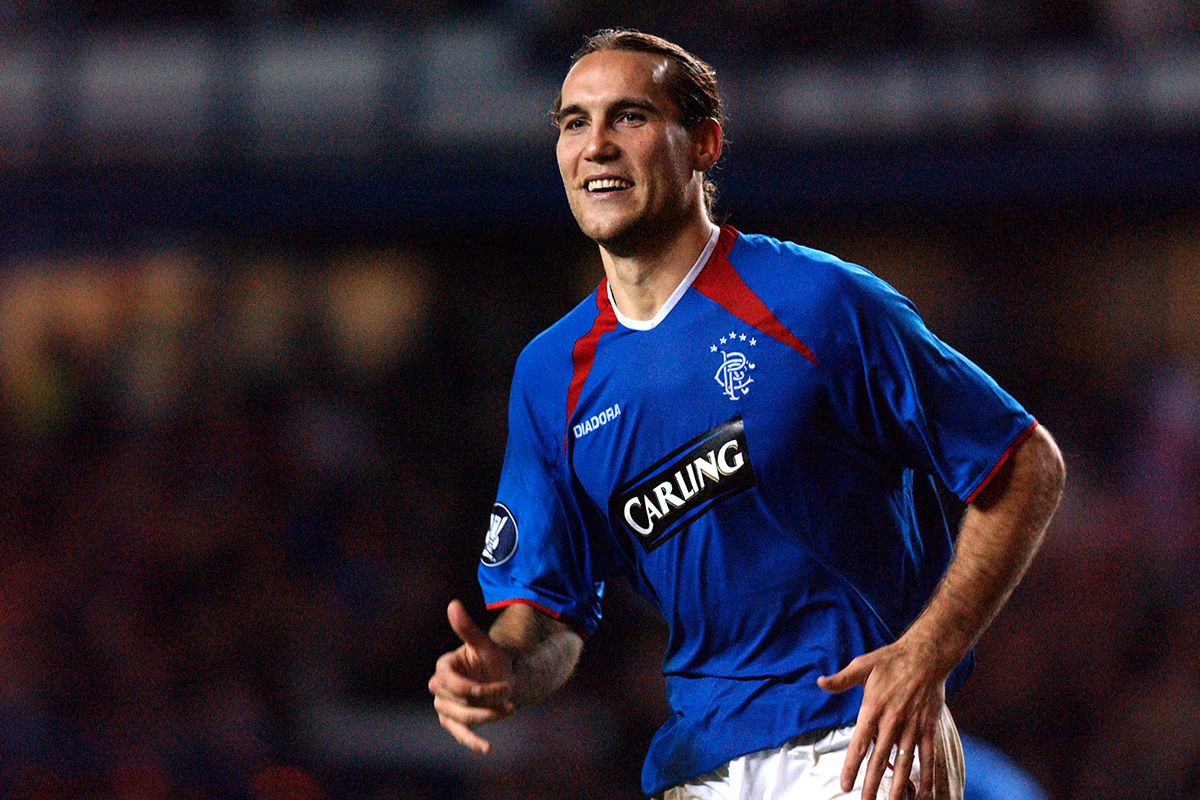 Dado Prso arrived in 2004 as a veteran yet played with the exuberance of a youngster. His all or nothing approach and knack of deciding big games are exactly why Alex McLeish described the Croatian as his “best Rangers signing.” His 18 league goals were crucial to the 2004/05 ‘Helicopter Sunday’ championship success and it’s telling that although he spent just three years with the Gers, he was given a guard of honour in his final game.

The smiling assassin- who ‘gets the ball and scores a goal’ as the chant goes- lit up Ibrox on a number of occasions and played with an exemplary attitude that made it easy for the fans to take to him. Mols was more than just an average number nine, he was an all-round striker who was hard to pin down, technically gifted with a trademark turn that would leave his markers chasing shadows.

It’s true that he wasn’t the same player after suffering a serious knee injury in the 1999/ 2000 campaign. His first 19 appearances for The Bears yielded 13 goals and thereafter he’d go on to score another 35 in four seasons but when in form Mols was a classy finisher and would provide more joy than the likes of Kenny Miller, Kris Boyd and Nikica Jelavic.

‘The Hammer’ may have left Ibrox in 2001 but it would be mad not to include him in this line-up. The German built up a special affinity with the Gers faithful during his five years at the club, consistently exciting them with his running power, technical brilliance and that rocket of a left foot which gave many keepers no chance. He was always good for a goal against Celtic as well.