Both of these teams will have been really happy with their last 16 draw as it hands both nations a great chance to progress further in this competition than anyone expected. Sweden are the slight favourites and have impressed so far this tournament but Ukraine are capable of causing them problems.

Read on for our full match preview and prediction for Sweden vs Ukraine in the European Championship.

Sweden might have only won one of their last four meetings with Ukraine but so far at Euro 2020, the Scandinavians have really impressed. After securing clean sheets in their opening two group games against Spain and Slovakia, Sweden then scored three times against Poland, showing off their attacking ability. Ukraine haven't managed to keep a clean sheet in the tournament so far and have relied on their attack to get them enough points to progress, but this Swedish defence are more than capable of shutting out the Ukraine forwards and nullifying their biggest strength.

Under 2.5 goals have been produced in three of the four previous encounters between these two countries and we're expecting another low-scoring affair on Tuesday. Four of Sweden's and three of Ukraine's last six international matches have also witnessed fewer than three goals being scored, so you can see why we're favouring a tight and tense 90-minutes between the pair.

Emil Forsberg has already scored 3-goals at Euro 2020 and we're predicting that the RB Leipzig midfielder will find the back of the net against Ukraine as well. Forsberg has certainly been Sweden's standout player at Euro 2020 and he is clearly brimming with confidence. The Midfielder makes late runs into the box and can score from range, but it is his composure in and around the opponent's penalty area that makes him such a threat.

Everything you need to know for Sweden vs Ukraine

Sweden have gone from strength to strength at Euro 2020 and have shown that they have many ways in which they can play. Against Spain, Sweden were dominated for 90-minutes but arguably could have won the game and held firm at the back to secure a 0-0 draw. Against Slovakia, Sweden never looked like losing and once again proved themselves to be too strong in defence for their opponents, running out 1-0 winners. The game against Poland allowed Sweden to show that even when they do concede goals they can still win games, netting three times against Poland and securing a 3-2 victory.

Ukraine have been pleasing to watch at Euro 2020 but only just made it through the group stage as one of the four best third-placed finishers. However, when Shevchenko's side have come up against strong opposition such as the Netherlands and Austria, they have lost on both occasions. Ukraine played well against the Netherlands, coming back from two goals down but still ended up losing the game 3-2, while against Austria they really struggled to create chances and this is where we feel they will suffer against Sweden.

We expect Sweden to lineup in their usual 4-4-2 formation which has proven successful so far in this tournament. As for the starting lineup, we're not expecting any surprises unless there is some late injury news yet to break so the eleven men set to play in this last 16 tie are…

Much like Sweden, we don't expect Ukraine to change from their tried and tested 4-3-3 tactic and we're also backing Shevchenko to go with the same starting eleven that took to the field in their last group game against Austria, which was… 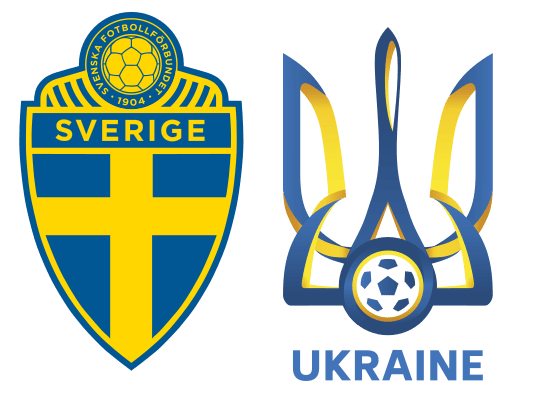