Both of these sides have made the FA Cup Final in recent-ish years with Wigan beating Man City 1-0 and Stoke losing to the same opposition by the same score line. This time it's Stoke vs Wigan; who wins? Find out with our Stoke vs Wigan match preview with free tips, predictions and odds mentioned along the way.

Calling it level at 90 mins

Wigan are performing really well in League One right now. They sit second with two games in hand whilst they're unbeaten in 20 games in all competitions winning 13 and drawing seven. That's a stark contrast to Stoke. The Potters are slap bang in mid table in the Championship and have mustered just three wins from their last 10 games. We still see this match ending level at the 90 minute mark though. Stoke have home advantage for one thing whilst the fact they're in mid table means a cup run might be all they have this season. Throw in the fact that Wigan will be missing a key player or two and they'll find winning this match tough; we just don't think they lose it either.

We fancy both sides to bag goals

Wigan's fine run of form probably, which we've touched on already, probably means you won't be surprised to learn that they've been banging goals in of late. They've netted in 18 of those 20 unbeaten games; that said, they've also conceded in 14 matches. When you the consider that Stoke have scored in six of their last seven in a higher league you have to draw the conclusion that they'll ask plenty of questions of the Wigan back line. Strangely, the sides met in pre-season too; both teams scored.

Check out the key stats & form for Stoke vs Wigan

Both of these sides have pedigree in this competition with Wigan having won it and Stoke having come runners up. There is a long way to go before either reach that point right now but a place in the next round would get crowds buzzing – especially if a big draw comes their way.

Stoke's season is about as ‘meh' as they come. The league campaign is as good as dead before a ball has been kicked in February so why not go full guns blazing at the FA Cup?

Wigan are performing admirably in England's third tier and whist promotion is the key aim, the club will understand how phenomenal a good cup run can be. If they're to beat Stoke though, they'll need to do so without injured top scorer Will Keane.

A brief FAQ ahead of Stoke vs Wigan 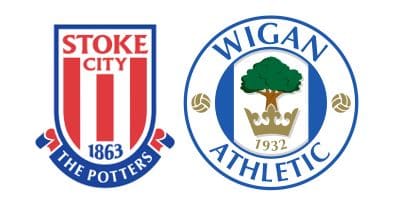