The first leg of this tie leaves things finely balanced and both teams kicking themselves for different reasons. Who will deliver in this second leg? Find out with our Nottingham Forest vs Sheffield United match preview with free tips, predictions and odds mentioned along the way.

There are a couple of reasons we fancy Nottingham Forest go win this game. Firstly, they’re at home, secondly, they were better than Sheffield United in the first leg and, finally, if things remain as they are in this tie then, at some point, Sheffield United will have to become more adventurous and commit more than they would probably like into attack. All of that combines together makes us believe Nottingham Forest will get the win they need to take them to Wembley.

Saturday's 2-1 result means that these two teams have both scored in each of the last three head to head meetings. That's a big part of why we fancy that to be the outcome again here. The other reason we wouldn't be shocked to see both teams on the scoresheet in this second leg encounter is down to recent form. Nottingham Forest have failed to score in just one of their last five games whilst Sheffield United have scored in all of their previous five matches.

We said at the start of this article that both teams would be kicking themselves. Well, Sheffield United will be ruing mistakes and Forest will be close to disbelief that the Blades are still in the game. It’s all to play for here.

Nottingham Forest were by far the better side in the first leg but after missing a series of chances – and then conceding late – they need to make sure they don’t let the Blades strike first here. If they do, the atmosphere at the City Ground will become very nervy.

Sheffield United had a bit of a mare in the first leg and, in many ways, it looked like the occasion got to them a little but. That said, Sander Berge grabbed a huge goal in injury time and they’ll know that if they keep Nottingham Forest at bay then they’ll have a real chance.

A quickfire FAQ on Nottingham Forest vs Sheffield United 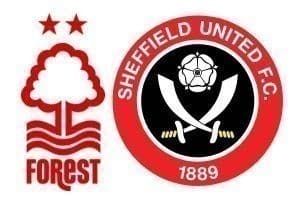