Scotland know how important it is to get off to a winning start in Group D but the Czech Republic are likely to provide stern opposition on Sunday. Czech Republic have lost their last three games against Scotland and will need to up their game this weekend to avoid making it four straight defeats.

Read on for our full match preview and prediction for Scotland vs Czech Republic in the European Championship.

Scotland have a decent record against the Czech Republic, especially in more recent years, winning each of the duo's last three encounters. The pair met twice in 2020 where Scotland first won in the Czech Republic 2-1 and then back on home soil 1-0. Scotland claimed a 1-0 win over Luxembourg in their final warm-up game ahead of the Euros and are now unbeaten in their last five fixtures. Czech Republic have lost two of their last three matches, including a 1-0 defeat against Wales.

We're expecting a tight and tense 90-minutes between two countries that will understand the high value of a win in their first group game. Four of the last six meetings between the two nations have produced under 2.5 goals, with each of those games ending in 1-0 scorelines. Three of Scotland's and three of Czech Republic's last three matches in all competitions have also featured under 2.5 goals, so you can see why we're backing a low-scoring affair.

Ladbrokes have suspended any betting on Che Adams to score first, score anytime, or to score 2 or more goals in this game, so we're backing the Aston Villa midfielder John McGinn to find the back of the net. McGinn has scored more goals than any other player in the Scotland squad, netting 10 times in 33 appearances for his country. The goalscoring midfielder finished as top scorer in the European Championship qualifiers for Scotland with 7-goals and we expect him to be a real threat in this tournament.

All you need to know for Scotland vs Czech Republic

Scotland hoping for a dream start to Euro 2020

As mentioned above, Scotland ran out 1-0 winners against Luxembourg thanks to a first-half goal from striker Che Adams. Before that encounter, Scotland played out an impressive 2-2 draw with the Netherlands and will be full of confidence heading into their opening game against Czech Republic. Chelsea's Billy Gilmour is a doubt for the opening game of Group D due to injury, while John Fleck is self-isolating following a positive COVID-19 test. Che Adams is still relatively new to the Scottish national team but has made an impressive start with 2-goals in four appearances, while in midfield, John McGinn has made a habit of scoring goals for his country and we believe he is going to be key to Scotland's success.

Ondrej Celustka and Tomas Kalas are both rated as doubtful to feature against Scotland on Monday. Both players missed out on the 3-1 win over Albania last time out, a result that will have given Czech Republic a confidence boost following the 4-0 drubbing they received at the hands of Italy just 4-days earlier. This Czech Republic team doesn't feel like it has a lot of goals in it, though, Patrik Schick has scored 11 times in 26 caps and will be dangerous if provided with the right kind of service. As we saw with West Ham this season, Tomas Soucek is very dangerous in the final third but Scotland will know all about him and will be preparing for his late runs into the box. 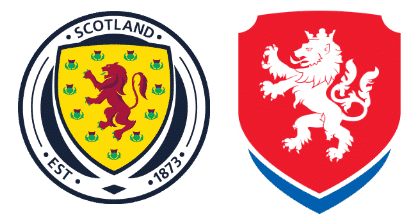