Verona are aiming for a top-half finish in Serie A this season and look well equipped to achieve their goals while visiting Sampdoria are still battling for their top-flight status and a win this weekend would go a long way to securing that.

Sampdoria might not be in the best of form right now but the visitors do have a great record against Verona which should stand them in good stead this weekend. The visitors have won six of their last seven competitive and non-competitive encounters with Verona, including a 3-1 win in the pair's reverse league fixture back in November.

Both teams have scored in each of the last four league meetings between these two clubs and we're expecting more of the same on Saturday. Four of Verona's and three of Sampdoria's last six outings in Serie A have ended with both teams getting on the scoreboard, adding further weight to our prediction for this weekend's clash.

Sampdoria could reduce their relegation fears with a win

Verona were looking to take advantage of Atalanta's poor form when they made the trip to the Gewiss Stadium last time out. The visitors took the lead in first-half stoppage-time when Ceccherini was set up by Simeone. Verona looked to stamp their authority on the game early in the second half and doubled their lead via an own goal from Koopmeiners in the 55th-minute. The last few minutes of the game ended up being nervy for the visitors after Atalanta pulled a goal back in the 82nd-minute but Verona held on to secure an impressive away win.

Sampdoria will be looking to bounce back on Saturday after they suffered a 2-1 defeat in their own backyard against Salernitana last weekend. Two early goals from Fazio and Ederson inside the opening 6-minutes handed Salernitana a dream start to the game. Caputo pulled a goal back before the break but Sampdoria failed to break down their guest's defence in the second forty-five and were left very frustrated.

Verona: Diego Coppola and Ivor Pandur are the main injury concerns for the hosts.

Sampdoria: Sebastian Giovinco and Manolo Gabbiadini could both miss out this weekend due to injury. 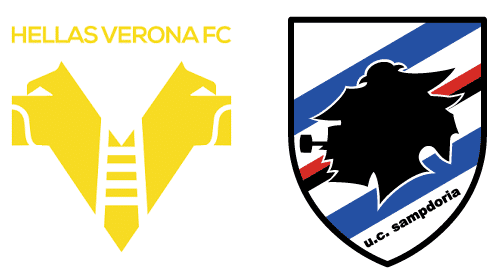