Ryan Giggs was a one-club player. That alone is a rarity in modern football when players are able to sell themselves to the highest bidders like hired gunslinger of the Old West. Yet, Giggs, who certainly had the opportunities to wear the shirts of other clubs throughout his career, spent all 24 years of his career at Old Trafford playing for Manchester United. Giggs’ time at Manchester United even pre-dated the Premier League as he made his first ever appearance for the Red Devils in 1990 in the old First Division. Even then, it was apparent that Giggs was something special. At just 17, he made his debut for Manchester United coming on for an injured Denis Irwin. Two months later, handed his first start, Giggs scored the first of 114 career English top flight goals for Manchester United.

The Welsh winger was a permanent fixture at Old Trafford throughout Sir Alex Ferguson’s time at the club. As he grew older, Giggs more resembled a player-coach sent out onto the pitch when Ferguson needed the magic of the club’s 1990s successes conjured up. Giggs was a part of Fergies’ Fledglings, the now-famous Class of 1992 alongside David Beckham, Paul Scholes, Nicky Butt, and Gary and Phil Neville. He was the oldest of the group, the one to have his name on the Manchester United first-team team sheet before any of the other members of the legendary academy graduates. It was only fitting that his name was the last as well when he retired in 2014.

For a generation of Premier League fans that were teenagers in the late 1990s and early 2000s, Giggs was everything they wanted to emulate. He wasn’t just the best footballer on the best team in England. Giggs was cool off it and became a sex symbol and pop culture icon. David Beckham had the hair, the flashy clothes, and the popstar wife. Giggs, on the other hand, was subtle. He was better than Beckham on the pitch and didn’t need the public relations machine of a popstar spouse to increase his name.

Giggs is widely regarded as the best player in Premier League history. It is a massive claim as the league has featured the likes of Beckham, Cristiano Ronaldo, Luis Suarez, and Gareth Bale to name but a few players. Yet, his production, performances, and consistency made him an elite star that is worthy of the ‘best’ tag. Giggs has now been retired for six years from the world of professional football. A time in which many will have forgotten just how spectacular he truly was on the pitch. In a world of instant gratification technology in which a footballer’s every step can be analysed and drooled over by fans, a look back at Giggs’ greatness shows just how far ahead of the rest of the Premier League the Welsh winger was. 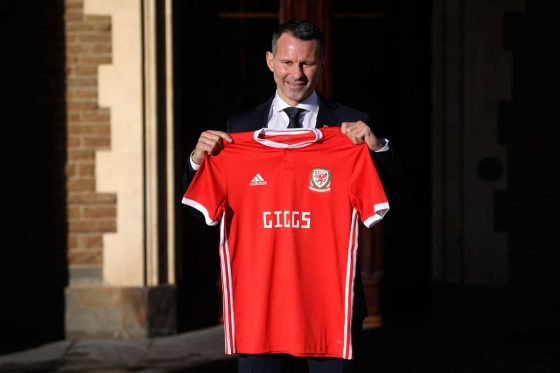 Giggs may not have been the Premier League’s best player year in, year out; but to be named the best player in Premier League history, he didn’t have to be the top star in a particular year. Why? Consistency is needed by a player to be labelled the best or greatest in history. Although arguments will be made that the all-time best should be the best each campaign, it is true that the likes of Diego Maradona, Johan Cruyff, and even Cristiano Ronaldo were not the best overall in each season they played.

When Giggs joined the first team in 1991, Manchester United were a big cub in name only. Their best years were past them and just a one season prior, Ferguson was on the chopping block. In 1990, Ferguson was to be fired had he not won the FA Cup versus Crystal Palace. The win kept him in the job and in 1992-93, he led Manchester United to the Premier League title. It was a title winning season that saw Giggs appear in 41 games in the Premier League. He scored nine goals and tallied five assists helping the club win the first of 13 Premier League championships together.

Manchester United were synonymous with the Premier League title in the 1990s and 2000s dominating the league over the course of a 20-year time span. Giggs was there every step of the way for the club and it is no wonder that the Red Devils’ last championship came the season prior to the winger’s retirement.

Commitment to the cause 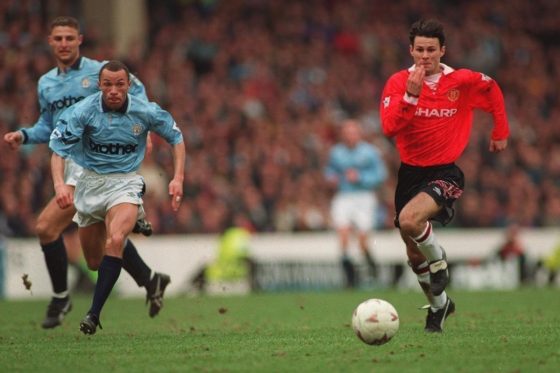 Footballers may have a dream life to those of us looking in from the outside, but many will argue being a professional football player can get monotonous. The training, the matches, the travel, and other aspects of being a professional football player can get to many individuals mentally and physically. Giggs never showed any kind of issue with commitment and always put Manchester United first.

Giggs and Beckham were brilliant players on the pitch with the former on the left flank and the latter down the right. It was a one-two punch in which opposing defences weren’t sure how to defend Manchester United. While Giggs remained a team player focusing on his game – in spite of off-pitch family issues – Beckham allowed his personal life to interfere with his professional commitments.

The Welshman could have left Manchester United years before he finally retired. Giggs was 41-years-old when he walked away from football. It is an age in which many footballers are already in management, working in television, or picking up a pay cheque playing for a lower division team or in a second-rate league abroad. Bred to be the best by Manchester United’s coaches in the late 1980s and early 1990s, Giggs still had a fire inside of him to continue playing. It is remarkably one of the reasons Giggs tallied an assist in each year of the Premier League’s existence from 1992 to 2014.

Goals are often how a player is judged in football, but Giggs wasn’t an out and out goalscorer. He was a winger capable of taking on players down the flank with mazy runs. His crosses were often converted to goals by Andy Cole, Dwight Yorke, and Ruud van Nistelrooy. Giggs’ 162 career Premier League assists are proof of his commitment to the team. A provider of goals that ensured the team’s expensive goalscorers had a healthy dose of supply.

It is no wonder that Giggs’ unselfish play has him atop the Premier League’s all-time assists list. It is unlikely that a Premier League player will catch the Welshman anytime soon. The only two active players in the top 10 currently are David Silva and James Milner. Neither of those players have much petrol left in the tank to compete in the Premier League. 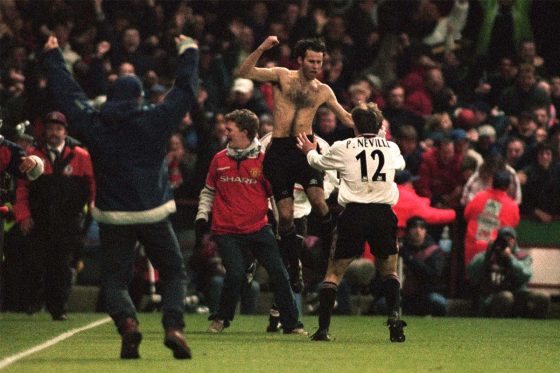 Commitment to playing the best football possible each season is one thing, but having the loyalty to remain with the same club that provided you your football education is another. It is true that too often modern football fans pine for players to be loyal to their teams and one club men. Yet, football of yesteryear was much different and players were tied to their clubs almost like indentured servants.

By the time Giggs arrived at Old Trafford, the winds of change were blowing. The creation of the Premier League led to the exportation of the football division to people all over the globe. Once unable to watch the top flight of English football, now football fans were being created in countries from the United States to Kiribati.

Giggs was the face of the Premier League in those early days, as much as Eric Cantona, more so after the Frenchman’s kung-fu kick at Crystal Palace. The riches and fame afforded to footballers in the late 1990s thanks to Sky Sports and the Premier League’s relationship was larger than anything seen before. At any time, Giggs could have traded in the gloom of Manchester for Juventus, AC Milan, Barcelona, or Real Madrid.

It was Real Madrid that Giggs’ long-time friend, teammate, and future Salford City co-owner would sign for in 2003. His very public spat with Ferguson led to a departure. Ferguson was unhappy with Beckham putting himself and his growing fame above the club. It wasn’t an issue the Scottish manager had to worry about with Giggs. The Welshman was loyal to a fault. Who picked up the pieces for the club when David Moyes’ was sacked as Manchester United manager in 2014? Of course, it was Giggs, who led the club to a 2W-1D-1L record in his four games in charge.

While the argument can be made that Giggs never left Manchester United because the club were one of the top sides in Europe, it is a difference of opinion that doesn’t hold water. How often do top footballers leave their successful clubs for pastures new to earn more money or try a new challenge? It has happened a few times at Manchester United alone. Van Nistelrooy, Beckham, and Ronaldo all left at one point. In all three cases, they went to the same club, Real Madrid.

There has long been an argument that Giggs’ love and desire to succeed for Manchester United was why he chose to represent Wales at the international level. He played for England at youth level but chose Wales in his late teens. The Welsh were not a power at the time giving Giggs the chance to rest and recuperate rather than play for England. Loyalty to Manchester United may have ultimately played a part in Giggs’ international decision. Although born in Cardiff and raised there as a child, Giggs would have had the chance to shine for England and play in the World Cup and European Championships. Was it loyalty to the Red Devils or Wales that prevented it? It will never be known.

A man for the occasion 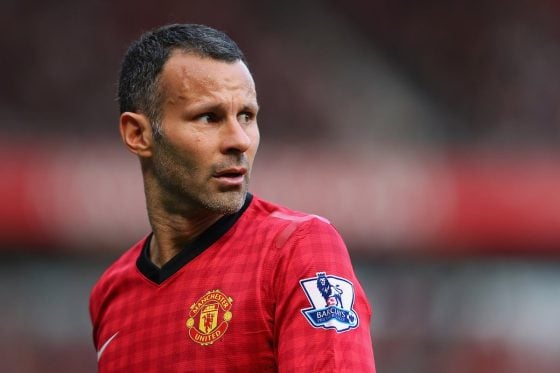 Giggs wasn’t just along for the ride at Manchester United. He was a big-time player capable of stepping up to the stage and making an impact when it mattered. As a Manchester United first team player, Giggs won 23 major domestic and European trophies. It is a haul that few players, even members of top club teams, acquire during their careers. His longevity was one reason for the number of trophies lifted, but also an ability to play his best football when it mattered.

The winger wasn’t the most skillful pulling off stepovers and other tricks. Pace was his calling card early in his career. As Giggs got older and lost some of that incredible speed, he began to use his brain more to unlock defences and create goals. While some players struggle to step up to the plate for a big match, Giggs was the opposite rising to the occasion when his team needed him most.

Giggs won 407 Premier League matches during his career. Just 87 times was he on the losing end of a Premier League scoreline. It is an incredible stat that reaffirms just how great Giggs was on the best team in English football over the course of two decades.