Watford have made a solid start to the season as they sit up in fourth place. Will they bank another three points here? Find out with our Rotherham vs Watford match preview with free tips, predictions and odds mentioned along the way.

Rotherham United's form has gotten gradually worse over the course of their season; they were unbeaten in their first five matches in all competitions, but have lost two of three games since then. With that in mind, Rotherham United currently occupy the 12th spot on the Championship table; they've accumulated nine points from a possible 21. Just like Rotherham, Watford have seen a decline in form in recent weeks; they've lost two of their last three games, despite having no losses in their first five matches. It's important to note however, that Watford tend to play well against Rotherham United; they won the last four meetings between these teams, with no losses in their last six clashes. On that note, we believe that the Hornets will win this match.

Rotherham United have struggled in front of goal in recent weeks; as they failed to score in three of their last five matches. Because of their lack of goals, most of Rotherham's games have been on the low-scoring side. As a matter of fact, four of Rotherham's last five games saw less than three goals scored. Similarly, Watford have had their fair share of low-scoring games; as seven of their last nine matches went below the 2.5 goal mark. Taking everything into consideration, we shouldn't expect a lot of goals in this match.

Here are the key stats & form guide for Rotherham vs Watford

Can Watford end the day in the automatic promotion spots?

Rotherham won promotion from League One last season and whilst they've made a solid start collecting nine points from just six games, a home match against Watford is going to be a tough afternoon. The Hornets are one of the most fancied sides in the league and will arrive in this match expecting to win.

Paul Warne will have a fully healthy group of players to choose from as his side host Watford. Despite having no absentees however, Rotherham have managed just one win in their last five games; will they be able to improve their poor form with a win here?

Ken Sema and Graig Cathcart left the pitch on Tuesday in Watford's win against Middlesbrough, due to slight injuries; both players are a doubt for this match. The Hornets are still without Samuel Kalu, Imran Louza and Tom Dele-Bashiru.

A quickfire FAQ on Rotherham vs Watford 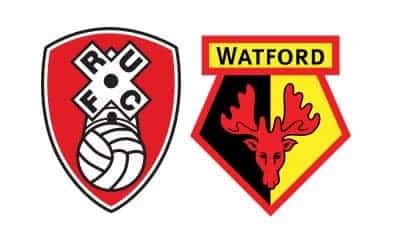