This will be a preview of the EFL Championship opener between Rotherham and Swansea City. The AESSEAL New York Stadium gets ready to host the game on July 30, 2022.

Swansea have done very well against Rotherham in the past with three consecutive victories. The last time Rotherham were able to succeed against the Welsh team was in 2018. Warne’s men have the confidence built up from last season and a newly promoted team can be quite challenging. However, Swansea do have a decent away record with only one loss in the recent five trips.

Swansea have been able to register a string of wins over Rotherham in recent years but they have struggled in terms of keeping clean sheets. Even during pre-season, the Welsh team had a similar problem. Warne’s team are likely to be full of confidence unlike the team that was relegated recently.

After Rotherham’s promotion from League One in emphatic fashion, the club are hoping to survive in the Championship for a bit longer than they have done in the previous years. In the last two attempts when Rotherham were promoted from League One, they have come straight back down. Manager Paul Warne will be hoping to use the experience to stay up a bit longer.

Swansea City come on the back of one of the disappointing campaigns since coming back to the Championship. After finishing fourth in the 2020-21 season, Swansea had to endure mid-table mediocrity last season. Manager Russell Martin comes into the game after having never overcome Rotherham in his managerial career.

Rotherham: Jamie McCart has picked up a knock from the recent pre-season game against Crewe Alexandra.

Swansea: Swansea might be without Liam Walsh due to an Achilles tendon rupture while Ben Cabango has an ankle injury.

Top EFL Championship Stats ahead of Rotherham vs Swansea

Questions about Rotherham vs Swansea 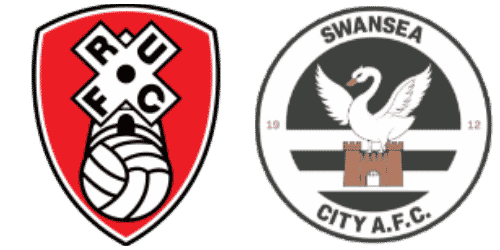 Where is the match scheduled? AESSEAL New York Stadium

Which team is the favourite to win? Swansea