Stockport look forward to extending their winning sequence when they visit the top team of League Two in the second round of the EFL Cup. Rotherham also have got a long streak of unbeaten games on their back before this game.

Stockport County come into this game after four consecutive wins and are unbeaten in the last seven games. But their next rivals are even better that are yet to lose from the last 17 games. Rotherham United have won four of the last five games overall in various competitions while registering five successive wins in their home stadium. So the trip to Rotherham seems a tough challenge for the Hatters. The Millers also claimed the victory in the last H2H duel. So we will be backing the home side to confirm their place in the next round.

Our next pick for this match would be a total of over 2.5 goals because goals have flowed when these teams met each other and all of the last five H2Hs meetings witnessed a high-scoring total. Adding more, both teams have scored at least two goals in four of their last five games.

The front line of Stockport have been incredible and have scored in all of the recent matches. The Millers missed the chance in their second last game but the home stadium has always been an easy option to score for them. Given their recent drift of scoring goals, we are confident to predict a BTTS outcome for this match. Four of the last five H2Hs followed the same pattern.

Rotherham vs Stockport: Check out the best odds and the latest stats

Match Preview of Rotherham vs Stockport: Millers look to go ahead at the Hatters expense

The Millers lost the lead in the last minute of their previous game playing in the EFL Trophy but managed the victory after the penalty shootout against Port Vale. They defeated Bromley in the first round of the FA Cup with a score of 3-0. The defensive line of the team has claimed three clean sheets in the last five games. Rotherham boss Paul Warne has no fitness concerns to report ahead of this game.

The Hatters won their third consecutive win of the National League in the last match against Wealdstone. County booked their name for this the second round of FA Cup after a thrilling 5-3 win against Bolton in the previous round. The team currently stands in eighth place of the National League. The club manager Dave Challinor will have an injury-free squad ready for the upcoming match.

Questions About Rotherham vs Stockport 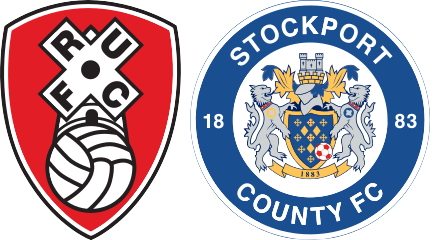 Where is the game being played? Aesseal New York Stadium.