As the reigning Spanish and European champions, playing the most bewitching football the game had ever seen and with an already-otherworldly attack bolstered by the record signing of one of football's most gifted forwards, the 2011/12 season promised more of the same for Barcelona; more success, more style and more silverware.

Ultimately, it wasn't to be. Having been persuaded to stay on as Barça manager a year longer than he'd planned, Pep Guardiola appeared visibly worn down, leaving for a year-long sabbatical at the end of the campaign. The £56million signing of Zlatan Ibrahimović proved a monumental flop, the Swede returning to Italy with AC Milan at the end of his only Camp Nou season. And Barcelona's grip on La Liga was prised by José Mourinho's streetwise Real Madrid.

Yet from this season of relative disappointment – Barça still won the Copa del Rey, the Spanish and European Super Cups and the World Club Cup – sprang quite probably the most incredible campaign of individual achievement in football history, as Lionel Messi scored 73 goals and registered 28 assists.

“Don't write about him, don't try to describe him,” implored Guardiola, himself as in awe of Messi's genius as the rest of us, “watch him.”

Messi was, of course, well established as the world's best player by this stage of his career, aged 24 and about to collect this third consecutive Ballon d'Or. The season before, he had scored 53 times to help Barça secure a double of La Liga and the Champions League, including a 25-yard strike in the 3-1 Wembley victory over Manchester United in the final of Europe's premier club completion, after which United manager Sir Alex Ferguson admitted his side “never really got near Messi”. 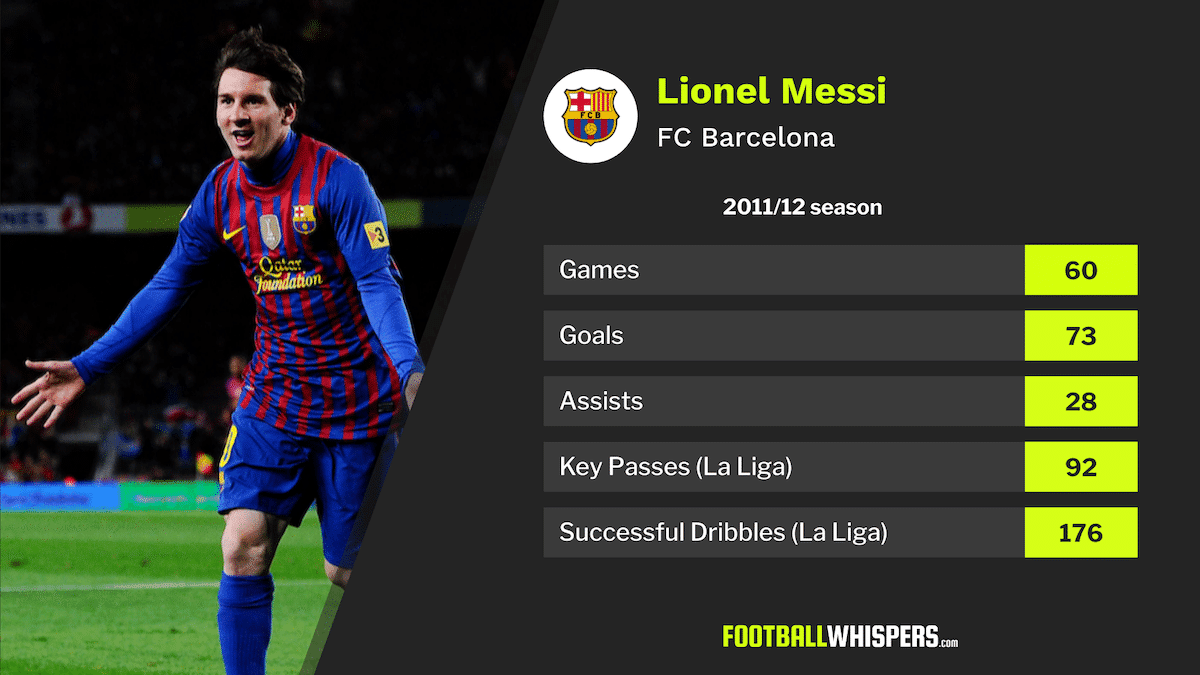 So, heading into the 2011/12 season, Messi was once again expected to produce the kind of greatness he had made almost quotidian throughout his career to date. But what he did, the sheer volume of goals he scored and created that term, shocked not merely because no one had thought him capable, but rather because such figures were never previously contemplated as a possibility for any player, even the world's greatest.

Messi began the season as he intended to go on, scoring three goals as Barcelona beat Madrid 5-4 across a thrilling, two-legged Supercopa de España contest. The first, bustling past the muscular and aggressive Pepe before rolling the ball under Iker Casillas' dive, earned a 2-2 draw at the Bernabéu. In the return fixture, Messi first latched on to a Gerard Piqué backheel and chipped over Casillas in trademark fashion, before lashing home a triumphant volley to settle the tie late on.

From that point on, it felt as though records fell almost weekly. Over the course of the season Messi usurped the great Hungarian forward László Kubala to become Barcelona‘s second-highest scorer in competitive games, then becoming top dog outright in March, surpassing César Rodríguez Álvarez, with his 233rd strike, coming via the first goal of a hat-trick against Granada at the Camp Nou.

Messi also became the first player in the Champions League era to score five goals in a single game, thanks to his haul in a 7-1 thrashing of Bayer Leverkusen. In October he scored the fastest hat-trick in club history, his treble against Mallorca completed in just 17 minutes.

There could be no flat-track-bully accusations levelled against Messi either: his nine hat-tricks included opponents such as Valencia, Atlético Madrid, Leverkusen and cross-city rivals Espanyol; he was directly involved in seven goals (three goals, four assists) in six games against Real Madrid and five (two goals, three assists) in four games against AC Milan in the Champions League.

Messi's 73-goal final total for the season set a new record for European football, eclipsing the 67 legendary German striker Gerd Müller racked up in 1972/73. The 50 La Liga goals the Argentinian magician notched, from just 36 starts, also set a new high mark for the Continent and earned him his second European Golden Shoe (of which he now has five and is currently on course for a sixth).

He also became the youngest player to reach 50 Champions League goals, and his 14 goals that season was a record in the competition.

He couldn't prevent Barça from crashing out at the hands of Chelsea in the semi-finals, though. For all his enormous effort throughout the campaign, there were times Messi looked tired, worn down by the burden of carrying a side who, though still bursting with magnificence, were increasingly appearing ever so slightly past their best; the Chelsea tie was one such example, as was April's crucial 2-1 Clásico defeat at the Bernabéu, effectively sealing the title for Mourinho's Madrid.

Barça still finished the season with 91 points, enough to win La Liga in all but two previous seasons in Spanish top-flight history. But Madrid, with the speed of Cristiano Ronaldo and Karim Benzema, the inventiveness of Mesut Özil and the steel of Mourinho's defensive-midfield “Trivote” of Lassana Diarra, Xabi Alonso and Sami Khedira, raced to 100 points, setting a new scoring record in the process, even if their pragmatism means they are remembered less fondly than Guardiola's Barça aesthetes.

“Time always wears you out and I am worn out,” Guardiola said at the end of the season, confirming his departure. “I am empty and need to refill … To sit here every three days a coach has to be strong, has to have to have life, passion. I have to get back to that and I can only do that by resting, distancing myself, because I believe we would have hurt each other, that is my perception.”

There was no rest for Messi, though. Starting the following season equally brightly, another record was his by the end of 2012, his 93 total goals the most ever scored in a calendar year. Barça went on to reclaim La Liga under Tito Vilanova, who had been Guardiola's assistant, themselves accumulating 100 points.

And although Messi finished the season 13 goals shy of his haul for the previous campaign, his 60 total strikes came from ten fewer appearances. Injury absences limited his La Liga starts to just 28, but his 46 league goals in 2012/13 came at an astonishing rate of one every 54.5 minutes, bettering his average of a goal every 65.4 minutes the year before.

Now in his early 30s, Messi is still as good as he's ever been, but, although he remains one of the world's most effective and reliable goal-scorers, there is more emphasis on his creative skills, having moved back out wide from the false 9 role his starred in during that magical 2011/12 season.

Throughout the Guardiola years, the Camp Nou was a cauldron in which was brewed an intoxicating blend of world-class players at their peak, the instruction of a tactical genius and greatest player the world has ever seen. Although 2011/12 is remembered as the denouement of that great team, what Messi was able to achieve that season will not be replicated for a long, long time.