On July 30th 1966 a group of players made history when they became the first, and to date only, English team to win the World Cup at Wembley stadium; but with so much emphasis on buying success and teams spending their way to the top these days, what did that team actually cost in terms of transfer fees generated?

England reached the final that year after qualifying from a group that contained Mexico, Uraguay and France; defeated Argentina in the quarter-final and then Portugal in the semi-final in a campaign that still fascinates the nation – and when the “Boys of ‘66” beat West Germany to lift the famous Jules Rimet trophy every player in that team instantly became a household name.

Surprisingly though, many of the players in that famous side weren’t too well known before that final and certainly weren’t the global stars that England players are now – with many having been signed on free transfers or having started out with their clubs as schoolboys or apprentices.

So here’s a look at the transfer fees commanded by the 11 players who defeated West Germany that day and just what they cost clubs for their services during their time playing the game. 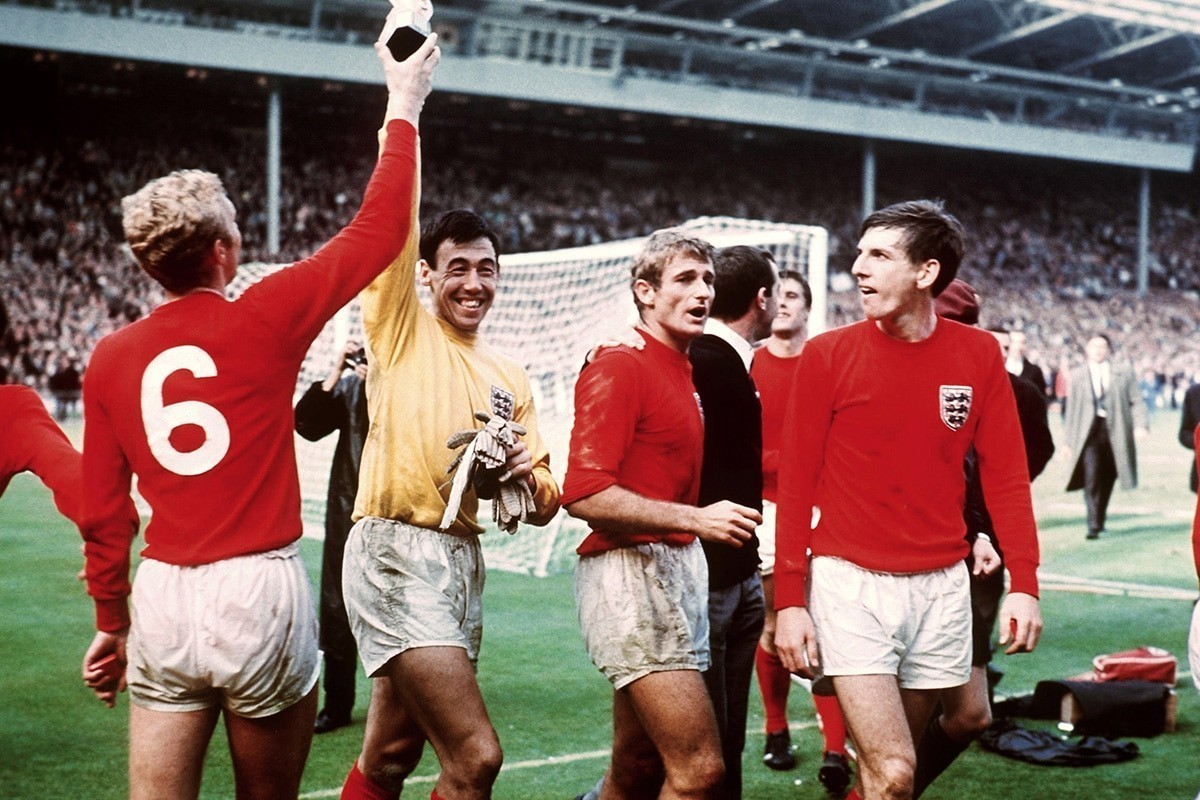 A key player in England’s World Cup triumph of 1966, Gordon Banks joined Chesterfield in the March of 1953 and made his first appearance for the club in November 1958. He was eventually sold for £7,000 to Leicester City in July of 1959 and made four cup final appearances for the club. During his time at Leicester he established himself as England's number one goalkeeper, and played every game in that victorious World Cup campaign; but despite this success, he was sold on to Stoke City in April 1967 for £50,000. Banks was still Stoke and England's goalkeeper when a car crash in October 1972 cost him the sight in one eye which eventually caused his career to be cut short.

After joining Fulham as a schoolboy George Cohen didn’t cost a penny. He spent his entire career at Craven Cottage where he was a committed and strong full back who loved supporting wingers thanks to his overlapping runs, very much in the modern wing-back mode. He joined Fulham professionally in 1956 and remained a dependable performer for 13 years, during which time he was part of the England side that lifted the Jules Rimet trophy in 1966. Cohen remained a loyal servant until March 1969, not winning any more major trophies with the club, before retiring from playing at the age of 29 due to injury.

Ray Wilson made his debut for Second Division Huddersfield Town under Bill Shankly against Manchester United in 1955 and would go on to spend twelve years at the club; making 266 appearances before signing for Everton in 1964 for £40,000, a record for a full-back at the time. Wilson was 29 and later admitted he feared he had waited too long to make the move to top-tier football so late in his career but was still part of the Everton team which won the 1966 FA Cup final and then lifted the World Cup just weeks later for England. Injury began to blight his career in Merseyside, however and he eventually left for Oldham Athletic in 1969, having played 116 games for the Toffees. Wilson then went on to become a player-coach at Bradford; but when he finally decided to hang-up his boots he decided not to stay in the game and instead became an undertaker. 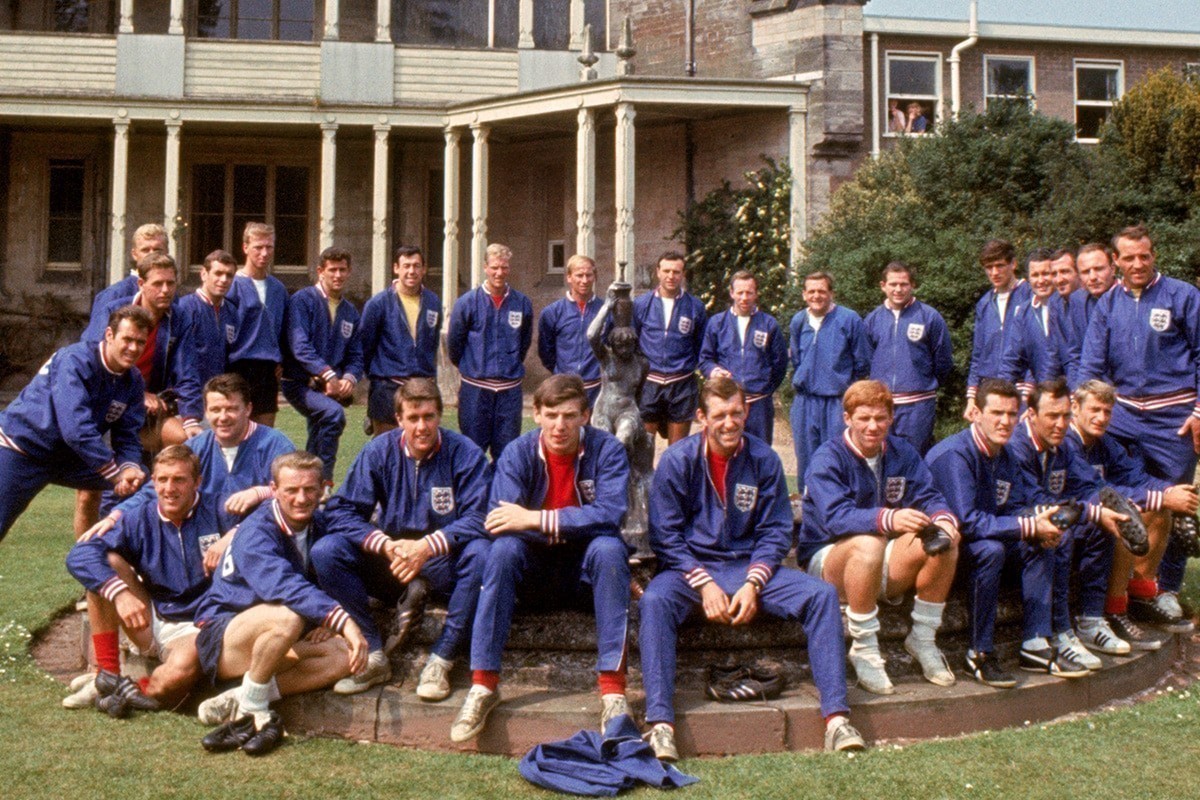 Another “one-club-man” of that 1966 World Cup winning side, the tough tackling Jack Charlton spent his whole career at Elland Road, meaning he generated no transfer fees in his entire playing career. The elder brother of Manchester United forward Bobby Charlton, who was also a teammate in England's World Cup final victory, Jack played for Leeds United from 1950 to 1973, helping the club to the First Division title in 1969, and the FA Cup in 1972.  After retiring as a player he worked as a manager and led Middlesbrough to the Second Division title in 1973–74, winning the Manager of the Year award that season before embarking on a managerial career that took him to Sheffield Wednesday, Newcastle United and eventually the Republic of Ireland.

Bobby Moore captained England that day in 1966 and is still regarded as one of the greatest defenders of all time. In 1956, Moore joined West Ham United as a player and, after advancing through their youth set-up, he played his first game on 8 September 1958. Moore surpassed West Ham's appearances record in 1973 when he played for the club for the 509th time just three days after he won his 100th cap for England. Moore played his last game for West Ham in an FA Cup tie against Hereford United and in January 1974 before joining London rivals Fulham, who were in the Second Division, for £25,000. During Moore's first season there they defeated his old club in a League Cup tie and then reached the FA Cup Final where they faced West Ham again, but were beaten 2-0. Moore played his final professional game in England for Fulham on 14 May 1977 before going on to play in the North American Soccer League.

Stiles won 28 caps and scored 1 goal for England over a five year spell which also saw him claim a World Cup winners’ medal. He played every minute of that victorious 1966 FIFA World Cup campaign gaining a reputation as a fearsome tackler and great ball player. Stiles played the majority of his club career for Manchester United, spending eleven years at Old Trafford, where he became renowned for his ball winning qualities. With the Red Devils, he won two League titles and one European Cup but then moved to Middlesbrough in 1971 for the fee of £20,000. Stiles ended his club career after moving to Preston on a free-transfer and taking up a coaching role before becoming the club’s manager.

One of the original “Busby Babes,” Charlton joined Manchester United as a schoolboy for absolutely nothing and ended up becoming a football icon around the world. Charlton made his debut for the Manchester United first-team in 1956, and over the next two seasons gained a regular place in the team, during which time he survived the Munich air disaster of 1958. Charlton was selected for four World Cup squads but the 1966 campaign was the obvious highlight, coming at a time when Charlton was at the peak of his game. He’d just won the league for United in 1965 and went on to win the title again in 1967, as well as helping his side win the European Cup at Wembley against Benfica in 1968. Until 2015 he held the distinction of being England's all-time top goal scorer with 49 goals and is still regarded as an England great. After leaving United on a free-transfer Charlton became the player/manager of Preston North End in 1973. 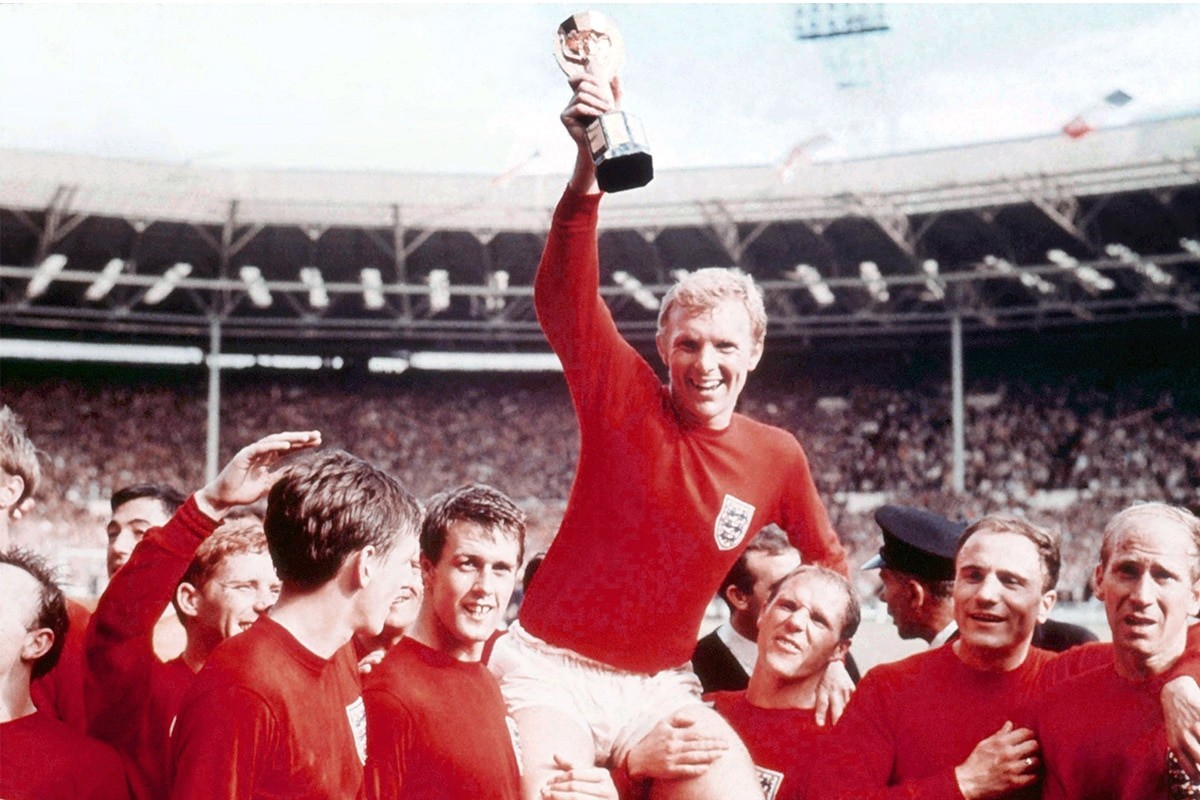 By far the most expensive player in England’s line-up 50 years ago was the tigerish midfielder Alan Ball. He was the youngest member of that World Cup winning side and following the win at Wembley Ball, who had joined Blackpool as a schoolboy, signed for Everton for £112,000. He stayed at Goodison Park for five years before being snapped-up by Arsenal in 1971 for a record fee of £220,000 where he made 217 appearances for the Gunners, scoring 52 goals. Following the departure of Arsenal boss Bertie Mee, Ball signed for Southampton for £60,000 in what was his final big move in the game. In the years that followed Ball moved to North America before returning to the UK to play for Southampton again after a free-transfer before beginning a coaching career and after retiring as a player, he enjoyed 15 years as a manager which included spells with Portsmouth, Southampton and Manchester City.

One of three West Ham players to play for England that day Martin Peters came through the productive ranks at Upton Park after signing as an apprentice in 1959 and went on to score 81 goals in 302 appearances for United. Peters didn’t play in the opening game of the 1966 World Cup campaign, but went on to confirm his status as an England legend after scoring the opening goal in the 1966 final against West Germany, which England eventually won 4-2. In March 1970, West Ham received a record-breaking £200,000 bid for Peters from Tottenham Hotspur and Peters moved to White Hart Lane, with former England team mate Jimmy Greaves going in the other direction. Peters won the League Cup and UEFA Cup with Spurs before moving to Norwich City – managed by his former West Ham team-mate John Bond – in March 1975 for £50,000. Peters ended his career after moving to Sheffield United as player coach on a free-transfer in 1980.

Probably one of the best known names from that 1966 game, having scored a hat-trick in the final against West Germany, Geoff Hurst’s combined transfer fees were relatively low by comparison. Beginning his career with West Ham United, where he scored 242 goals in 500 first team appearances, Hurst won the FA Cup in 1964 and the European Cup Winners' Cup in 1965. Some six years after England’s World Cup success he was sold to Stoke City in 1972 for £80,000 and after three seasons, finished his career with West Bromwich Albion in 1976 following a free-transfer. Hurst went on to play football in Ireland with Cork Celtic and the USA for Seattle Sounders before returning to England to manage non-league Telford United.

Joining Liverpool on a free-transfer from the lower reaches of English football Hunt went on to score 285 goals in 492 appearances for the Reds – a tally later eclipsed by Ian Rush. Under Bill Shankley Hunt blossomed and went on to win two league titles and an FA Cup and in the 1961-62 season even achieved the incredible feat of scoring 41 goals in 41 games. Hunt made his England debut in 1962 and in 1966 was selected to play alongside Jimmy Greaves in that year’s World Cup; but injury to the Spurs striker meant that Hunt would play alongside Geoff Hurst – he played all six games in that cup run and scored three goals. In 1969 Hunt finally left his beloved Liverpool when he signed for Bolton Wanderers for £32,000. 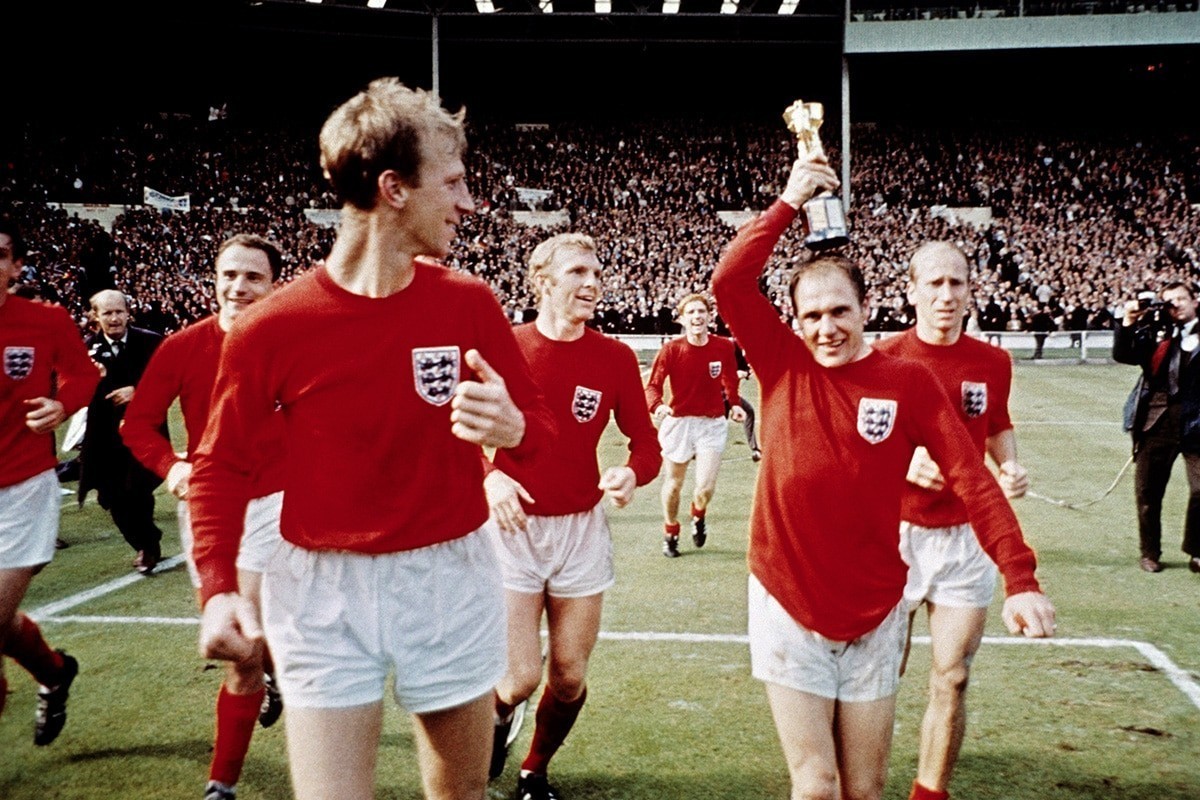 Combining the career transfer fees of England’s starting eleven for the World Cup final versus West Germany on July 30th 1966, the total cost of that side comes to £916,000, which in today’s money equates to around £16million. However, seeing as many of the big money moves came after England’s triumph the cost of the side going into that game actually totals an astonishing £47,000 or £820,000 in today’s money, with only goalkeeper Gordon Banks and record-breaking defender Ray Wilson commanding any kind of fee before that historic day.