The Premier League era began in 1992 as British football came out of the shadows of the 1980s and into the bright lights of modern football. The English top flight’s transformation not only led to more exposure to football fans around the globe, but to money streaming into the league.

Premier League clubs have used their financial power to buy the services of some of the biggest names in football. Unfortunately, not all of the transfers have panned out. The Biggest Flops in Premier League History list is one that grows with every season, yet there are some names that certainly stand out more than others.

Boateng’s brief spell is all the more remarkable as current Manchester City manager Pep Guardiola has spent £350m and counting on defenders since he arrived in 2017. Guardiola must wish he had the consistent defensive qualities of Boateng in his team.

The German defender arrived at Manchester City in 2010 from Hamburg SV for £10.4 million. He played just 16 times in the Premier League helping the club finish third and win the FA Cup. Bayern Munich saw potential in the young defender and gladly paid £15m for his services. Boateng has now played nine seasons at Bayern Munich and appeared in 321 games in all competitions and counting. 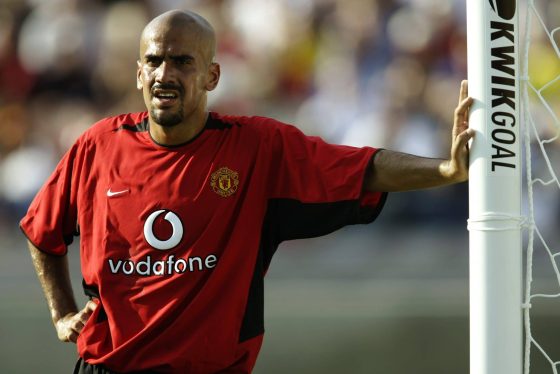 It is rare that one player finds himself on the list of Biggest Flops in Premier League History with two teams. Yet, that is exactly what midfielder Juan Sebastian Veron has done. Veron had made a name for himself at Lazio where he helped the Biancocelesti win Serie A, the Coppa Italia, Supercoppa Italiana, and the UEFA Super Cup. He was indeed a player in demand and Sir Alex Ferguson’s Manchester United beat the rest of world football to his transfer.

Veron arrived in the summer of 2001 for a then-British transfer record of £28.1m. The move was supposed to give Manchester United the best midfield in football. Paul Scholes and Roy Keane were already solid members of the midfield and Veron was expected to make it better.

It didn’t take long before Veron struggled with the fixture congestion, pace, and physical play of the league. He no longer had the time on the ball that was enjoyed at Lazio. Veron still made 82 appearances in all competitions over the course of two seasons before being sold to Chelsea in 2003. The Blues had just been taken over by Roman Abramovich and Veron was one of their early big-money signings.

Veron did little better at Stamford Bridge appearing seven Premier League games over the course of one season. Due to his high wages and potential transfer fee, Chelsea couldn’t shift him. Between 2004 and 2007, Veron was loaned to Inter Milan and Estudiantes to ease the pressure on the club’s wage bill. 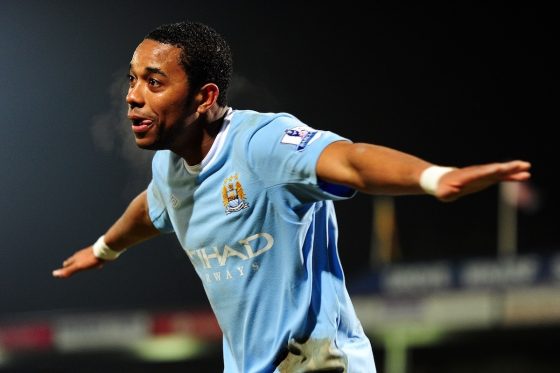 On the same day that Manchester City were purchased by the Abu Dhabi Group, they signed Brazilian Robinho from Real Madrid for a price of £32.5m. His addition was Manchester City’s first shot in their bid to become one of the Premier League’s elite teams. Robinho had been signed by Real Madrid as a teenager from Santos after being labelled as the next Pele. He never fulfilled his potential at the Santiago Bernabeu and left most fans more furious than infatuated.

Robinho’s addition to Manchester City was a statement of intent. It would be a few years until the club would actually get it right in the transfer market recruiting players, however. Still, there was a lot of excitement over Robinho’s arrival. In fact, it was believed Manchester City could crack the top four right away.

His first season showed plenty of promise with 14 goals in 31 league games. However, Manchester City still finished 10th in the league. Robinho did well individually, but didn’t improve the side as a whole. The club would do better a season later finishing fifth, but Robinho only made 10 appearances and scored zero league goals. Injuries sidelined him and in 2011, he was shipped out to AC Milan. 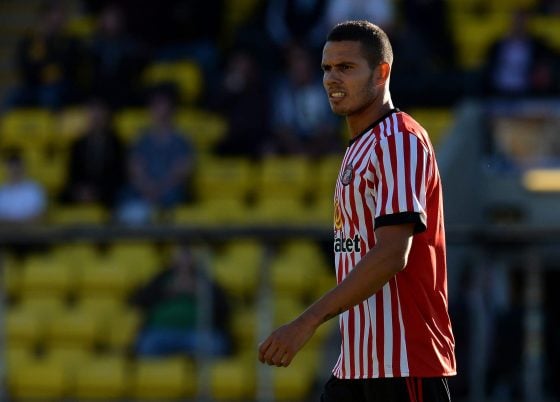 It wouldn’t a list of Premier League flops unless a Sunderland purchase from the 2010s was included. At one point, Jack Rodwell looked to be one of the next great England midfielders. Rodwell came through the Everton academy and went on to make over 100 appearances for the club.

His potential at Everton influenced Manchester City to pay £12m for his services in 2012. It was a small fee for Manchester City but it allowed them to add depth to the squad. Rodwell never truly fit in with the Cityzens, however. He spent just two years at the Etihad Stadium appearing in 25 games.

Rodwell was surplus to requirements at Manchester City and Sunderland pounced spending £10m to sign him in 2014. The midfielder did little at the club except take money. He was a part of a Sunderland team that experienced relegation to the EFL Championship in 2017 and refused to take a pay cut despite the club floundering in financial mismanagement.

He made £70,000-a-week, or £3.64m a season, appearing in 76 games in all competitions scoring just seven goals. By the time Rodwell finally left the club, he had helped them secure back to back relegations going all the way from the EFL Championship down to League One. In Rodwell’s defence, he only appeared in three games during Sunderland’s EFL Championship campaign after being declared not fit mentally to play. 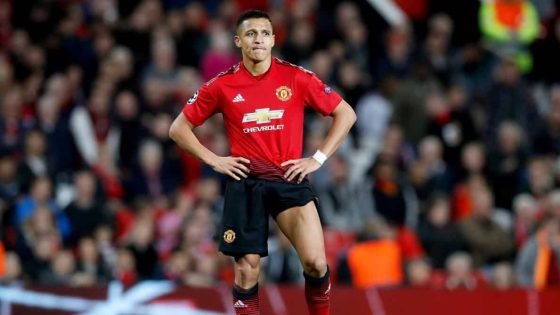 The club’s desire wasn’t always to get rid of the Chilean. Former manager Jose Mourinho made him a priority to sign in January 2018. Upon his arrival, it was believed Sanchez would push the Red Devils over the line to win a Premier League title under Mourinho. Sanchez had been brilliant at Arsenal and now expectations were high he would replicate the same form.

It didn’t happen. Injuries blighted his time at Old Trafford but even when fit Sanchez struggled to make a positive impact. Sanchez scored just three league goals in 32 matches in all competitions. He earned more than £59m while at the club with each goal costing the Red Devils around £19.7m. 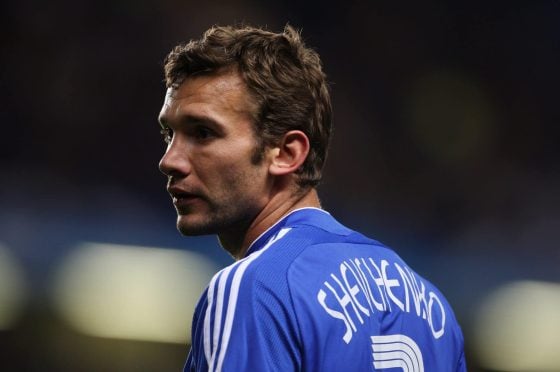 Andriy Shevchenko was undoubtedly one of the best – if not the best – strikers in the world in the mid-2000s. Between 1999 and 2006, Shevchenko scored 172 goals in 296 games for AC Milan in all competitions. He won a clutch of trophies at the San Siro including the Serie A Scudetto, Champions League, Coppa Italia, and UEFA Super Cup.

In 2006, Chelsea paid a then-British record of £30.8m for Shevchenko’s services. The Ukrainian struggled to get up to the pace of the Premier League. He didn’t have the same skill players around him like at AC Milan and was often outplayed by teammate Didier Drogba.

The striker won just one trophy during a two-year stint at Stamford Bridge. The club’s only piece of silverware was the 2006-07 EFL Cup. In total, Shevchenko scored just 23 goals in 77 appearances in all competitions. Although it wasn’t a terrible return, just nine of those goals were scored in the Premier League. He returned to AC Milan before finishing out his career at Dynamo Kyiv, but never looked like the same player prior to arriving at Stamford Bridge. 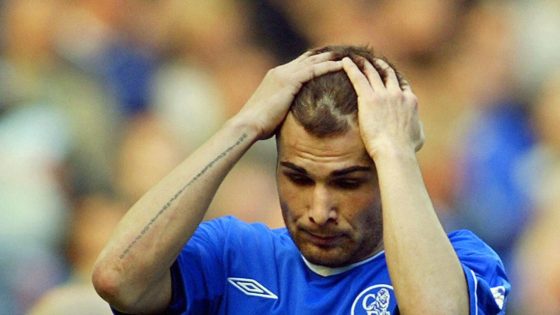 Chelsea have made a few poor decisions in the player market since Roman Abramovich bought the club in June 2003. Striker Adrian Mutu was the first flop to arrive under Abramovich’s watch as he joined the club in 2003 from Parma for £15.8m.

The pressure was high on Mutu to score goals. In one season at Parma, Mutu had bagged 18 goals in 31 appearances. He was expected to do even better at Stamford Bridge with the talent assembled at the club.

Mutu appeared in 27 games in his debut season scoring 10 times disappointing onlookers. His time at the club is not remembered for the goals he scored. Rather it is remembered for his failed drug test in 2004. The test found cocaine in his system and Chelsea released him shortly thereafter.

The saga doesn’t end there. Chelsea filed a lawsuit against Mutu for breaching his contract. The two parties spent a decade in court with Chelsea ultimately winning the verdict. Mutu was ordered to pay the club millions of pounds in compensation. 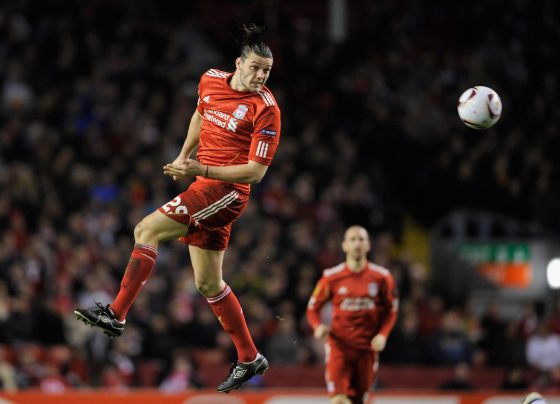 Andy Carroll had the misfortune of holding the British transfer record when he moved from Newcastle United to Liverpool in January 2011. Fresh off of selling Fernando Torres to Chelsea, Liverpool set out to rebuild their team using Moneyball tactics. They crunched the data and found Carroll’s ability to score headed crosses to be worth £35m. Unfortunately, they overvalued headed goals.

The transfer did look promising when it was signed. Carroll had helped Newcastle United achieve promotion to the Premier League the prior season and scored 11 goals for the Magpies in the first half of the top-flight campaign.

Carroll would soon experience injury problems and finished the second half of the season playing just nine times scoring twice. The next season was slightly better as Carroll scored nine times in 47 appearances in all competitions. However, with Liverpool lacking the direction they would later get under Jurgen Klopp, Carroll was loaned – and later sold – to West Ham.

In the same transfer window that Carroll arrived at Anfield, Liverpool signed Uruguayan Luis Suarez from Ajax for £22.8m. It is safe to say they got a far better deal for Suarez, who was later sold for nearly £65m to Barcelona.

Bebe will go down as the biggest flop in Premier League history when he moved to Manchester United in 2010. Ask any Manchester United fan which player is their worst ever signing and they will tell you it was Bebe – if they can remember him at all. Manchester United only paid £7.92m to Portugal’s Vitoria Guimaraes for Bebe’s services. It is a small fee in today’s world of inflated transfer prices. However, a decade ago, £7.92m was still a significant fee for a player that no one had ever heard of previously.

Bebe was a great story in the making. He grew up in a Lisbon homeless shelter and played for the CAIS homeless organisation at the 2009 European Street Football Festival scoring 40 goals in six games at the tournament.

The forward was signed by Sir Alex Ferguson without being seen. Former assistant Carlos Queiroz had recommended Bebe to him and surprisingly, the legendary Manchester United gaffer okayed the funds for the signing.

The ridicule didn’t take long to rain down on Ferguson and the Red Devils. Bebe’s first appearance was as a substitute coming on for Owen Hargreaves after just 10 minutes against Wolverhampton Wanderers. Ferguson later subbed off Bebe in the second half after a poor display.

Bebe spent four years on the books at Old Trafford but played just seven times. He did manage two goals during that period, but it hasn’t prevented supporters from claiming he was the biggest flop in Premier League history.