A home tie against Liverpool awaits one of these two clubs in the Quarter-Finals of the FA Cup and it is the hosts, Notts Forest, that are being backed by the bookmakers to win on Monday night. We're expecting a very tight and tense 90-minutes that might not produce a lot of goals but should still be entertaining for the neutrals.

We're not expecting both teams to score on Monday night at that has only been the case in two of the last seven meetings between Notts Forest and Huddersfield. Only one of Notts Forest's last four matches and two of Huddersfield's last five fixtures have ended with both teams getting on the scoreboard.

Under 2.5 goals have been produced in five of the last seven encounters between these two clubs, including both of the meetings between the pair in the Championship this season. Three of Notts Forest's last four outings have produced under 2.5 goals, while four of Huddersfield's last six matches have witnessed fewer than three goals scored.

At the weekend, Notts Forest played host to Bristol City in the Championship. A goal from Johnson in the 38th-minute after good work from Spence put the home side in front and 10-minutes into the second forty-five, Garner made it 2-0 and practically wrapped up the 3pts for Forest. Forest sit 9th in the Championship table and are still in the hunt for a spot in this season's play-offs. After defeating Leicester City in the last round of the FA Cup, you can see why the home side are the favourites to host Liverpool in the next round.

Huddersfield made the trip to Birmingham at the weekend, where a 27th-minute goal from Colwill put the visitors in front. Before the break, O'Brien added a second goal for the Terriers and Huddersfield never looked back from that point on. Following another good result, Huddersfield sit third in the table and could well make their return to the Premier League this season. Huddersfield knocked out Barnsley in the last round of the FA Cup, so don't be surprised if they progress through to the Quarter-Finals.

Notts Forest: Grabban, Osei-Tutu and Soh could miss the game through injury.

Huddersfield: Schofield, Pipa, Aarons, Anjorin and Vallejo are all doubts for the 5th Round trip to the Midlands. 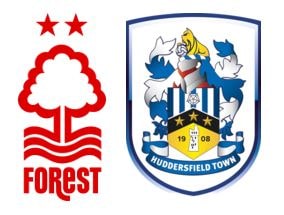