Leicester City's season is in danger of fizzling out following their defeat in the Conference League semi-final and their weekend loss at home to relegation battling Everton. Already relegated Norwich provide the opposition for Wednesday night's Premier League clash at the King Power Stadium and the Foxes are big favourites to win the game.

Leicester have won four of their last six meetings with the Canaries in all competitions and secured a 2-1 victory in the pair's reverse fixtures back in August. over 1.5 goals have been scored in five of the last seven head-to-heads between the pair and we're expecting at least two goals to be scored on Wednesday night. At least two goals have also been scored in four of the Foxes' last six outings as well as in each of Norwich's last five fixtures and the visitors have lost their last four league games.

Everything you need to know about Leicester vs Norwich

Rodgers needs a positive end to the season

Leicester would have been expecting a tough game at home to Everton following their midweek defeat in the Conference League. The tired legs were clear to see as once again Leicester were undone by set-pieces. First off, A quick throw-in deep in the foxes' half led to a cross over to Everton left-back Mykolenko who fired home a breath-taking volley from outside the area to put the visitors a goal up. Daka pounced on a mistake in the Everton defence to bring Leicester back onto level terms in the 11th-minute but an Everton corner was eventually headed home by Mason Holgate on the half-hour mark and that proved enough for the Toffees to win the game.

The season can't be over quickly enough for Norwich and their fans following a 4-0 drubbing at the hands of West Ham. Benrahma scored twice in the first half and sandwiched between that was Antonio's first league goal since January, as the Hammers went in at the break 3-0 up. Lanzini converted a second-half penalty to make it 4-0 in the end, another disappointing display from Norwich.

Leicester: Maddison, Justin, Pereira, Bertrand and Ndidi could all miss the midweek clash with Norwich.

Norwich: Idah, Omobamidele, Zimmermann, McLean, Sargent and Kabak are the key injury concerns for the visitors.

Leicester vs Norwich: Your Questions 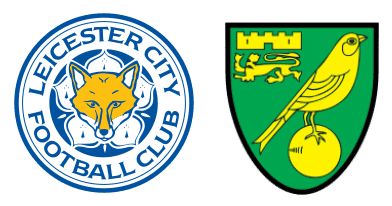