Swindon are living very dangerously with a 100% winning run not even enough to guarantee their safety. In fact, it probably won't be. They still have to try though. Can they get the better of MK Dons? Find out with our MK Dons vs Swindon match preview with free tips, predictions and odds mentioned along the way.

The best tips for MK Dons vs Swindon

Swindon might have recorded a cracking win over Portsmouth last time out but the MK Dons did the same a game week earlier. Swindon had also lost their six games prior to that win. MK Dons' form has been over a slightly longer period than just a solitary match – especially on their own patch. They've won four of their past five at Stadium MK and given Swindon have lost their last three away from home along with seven of their last 10 the hosts will be eyeing victory without doubt.

One goal for Swindon…but not enough

We don't expect Swindon to come away from their encounter with anything to show for their trouble but a prediction of them scoring a goal doesn't sound too wild. In their last six away games they've found the net seven times; not once in that time have they failed to score meaning they've hit a single goal in five of the six encounters. Given that MK Dons have conceded a grand total of five in their past five home matches it seems highly plausible that Swindon will manage to bag another solitary goal.

Our final prediction is focussed on the fact we expect there will be a minimum of three goals. Two of the MK Dons last five home matches have seen over 2.5 goals with the last three of Swindon's away games all ending in excess of the all important 2.5 level. A final glance over the past meetings of these sides will highlight just how likely it is that we see plenty of goals; the past three head to heads at Stadium MK have served up a combined 13 goals with all of those fixtures going beyond the 2.5 goal cut off.

Swindon to drop to League Two

MK Dons still have an outside chance of making the playoffs but even the most hardcore fan would probably tell you that's a near impossible outcome for their season. Swindon's season hangs in the balance though and an honest stance will tell you that they look doomed to relegation. Depending on results, they could go as soon as Saturday.

The closing thoughts on MK Dons vs Swindon 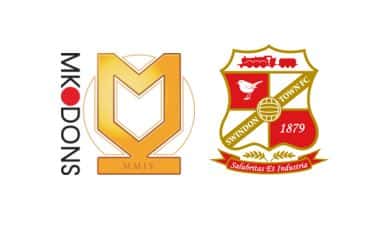