Bournemouth have booked their place back at the big boys table by securing a top two finish. Can they sign off with another win? Find out with our Bournemouth vs Millwall match preview with free tips, predictions and odds mentioned along the way.

A point won't do but it's all Millwall will get

Bournemouth might know where they're finishing this season but Millwall don't; they've still got a mathematical chance at sneaking into sixth spot. They'd have to beat Bournemouth though and we don't see that happening. Instead we are backing a draw. Bournemouth have drawn three of their last five home games whilst Millwall have taken a share of the spoils in four of their last five away matches. On top of that, each of Millwall's last two visits to the Vitality Stadium have ended in draws.

We've touched on the fact neither of these teams are winning games left, right and centre recently and neither are the hitting the goal with massive success either. Bournemouth have gone under 2.5 in four of their last five home matches with Millwall coming up south of the 2.5 mark in three of their past five away games. Even over the season as a whole their total goals stats aren't that convincing; Bournemouth are bang on the money at 2.5 but Millwall sit on just 2.2 per game.

Here are the key stats & form guide for Bournemouth vs Millwall

Bournemouth vs Millwall: Let's look at the predicted lineups

If you're Millwall then you're delighted Bournemouth have nothing to play for here. Will the Lions make a last day leap to the playoffs?

Bournemouth will be a Premier League side next season but have no chance of winning the league. That means this game is full on party mode for the Cherries. With that being said, they'll still want to sign off their campaign with three points.

Millwall have to win this game if they're to make the top six. That's going to be easier said than done though with their away form having been poor all season. If Bournemouth take their eye off the ball though, things could get interesting.

A quickfire FAQ on Bournemouth vs Millwall 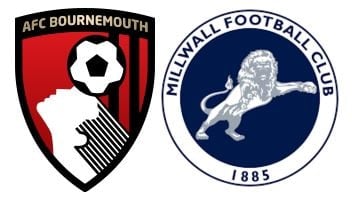