Manchester United’s Class of ‘92 is the most famous group of football academy graduates in Premier League history. In many ways, the group featuring David Beckham, Ryan Giggs, Nicky Butt, Paul Scholes, and the Neville brothers, was the last great group of youngsters to be promoted into an English first-team around the same time period.

The Class of ‘92, known as Fergie’s Fledglings at the time, were a once in a generation group. Since the six players came through Manchester United’s academy and joined the club’s first-team, no Premier League club have been able to replicate it. Although the Red Devils have attempted to once again graduate top-class players into the team around the same time, they too have been unable to replicate their own success. It looks nearly impossible that any club will see six future legends promoted all at once ever again.

In recent years, as the six iconic players have got older, the legend of the Red Devils Class of ‘92 has grown even greater. With fewer English players being promoted into the first-teams of Premier League clubs, the successes of Manchester United with all six stars have become even more extraordinary. The legend has also grown thanks to the sextet all investing in Salford City Football Club. Their group investment and ownership of the club have led Salford City to League Two from the doldrums of semi-professional football.

Who are Manchester United’s Class of ‘92?

The Class of ‘92 is made of Beckham, Giggs, Butt, Scholes, and Phil and Gary Neville. The name Class of ‘92 was given to them as 1992 was the year that a majority of the group graduated from the Manchester United youth team into the first-team.

By the time 1992 rolled around, Giggs was also a part of the senior team at Old Trafford, but was still getting to play regularly with the youth team. He was the first of the young players to really get a chance in the Manchester United first-team in 1991. Giggs appeared for the Red Devils before the Premier League was launched, but was still sent to play with Eric Harrison’s youth team to get more game time.

Breaking into the first team and becoming stars

Giggs was the first player of the Class of ‘92 to become a star. He signed a Manchester United professional contract on his 17th birthday and debuted for the first-team days later. The Welshman was the original face of the sextet and a major selling point of the Premier League around the globe in the middle and late 1990s.

In 1992, Sir Alex Ferguson gave first-team debuts to Beckham, Gary Neville, and Butt. Beckham may have become the most famous on a global level, but he wasn’t always figured in to be an instant star at Old Trafford. He received limited first-team chances following his initial debut. In 1994, he was sent on a short-term loan to division three team Preston North End. A move from one of the biggest clubs in the world to a smaller, lower division side can often be mentally crushing. However, Beckham used that experience to his advantage scoring two goals in five games. He was soon called back up to the Red Devils.

Ferguson and his coaching staff have received an incredible amount of praise for developing and bringing through the group. The Class of ‘92, aka Fergie’s Fledgling 2.0, wasn’t the first group of young players the Scottish manager had developed at Old Trafford, however.

Manchester United’s incredible success of the 1990s and 2000s make it easy to forget that they were in the football doldrums when Ferguson arrived in 1986. After success in the 1950s and 1960s, Manchester United fell on hard times as Liverpool became the most famous team in England during the late 1960s, 1970s, and 1980s. Modern fans think that they have it bad post-Ferguson, yet any fan old enough to remember the lean decades of the 1970s and 1980s know things could be worse.

Ferguson arrived after years of success in Scotland with Aberdeen. Yet, life at Old Trafford was far from easy. By the spring of 1990, the Red Devils were ready to sack Ferguson. However, the club’s FA Cup final win against Crystal Palace saved his job. Just three years later, Manchester United were Premier League champions ending a 26-year title drought.

On New Year’s Day 1989, Ferguson was fighting to keep his job when Liverpool came to town. The Red Devils had a long list of injuries and youth team players were promoted to the first-team for the game. After shocking the Reds – who went on to win the title – the youth players were fast-tracked into the first-team.

The original fledglings were a blueprint and enabled Ferguson to get things right with the next promising group. The Class of ‘92 was special and Ferguson had learned from promoting the original group of players. It would lead to a greater impact from the second group of youth players to be promoted. 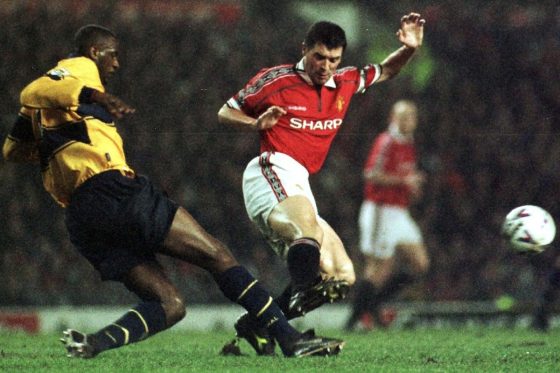 Manchester United spent large sums of money on players throughout the 1990s and 2000s under Ferguson. Yet, it cannot be denied that the manager still brought through young players, giving them a chance to shine at Old Trafford. One of Ferguson’s first task in turning around Manchester United was to rid the club of “troublemakers”. He axed fan favourites like Norman Whiteside and Paul McGrath due to their influence on the squad in negative, off-pitch ways.

The lack of these big players led to a pathway being created allowing youth team players such as the Class of ‘92 into the first-team squad. Ferguson had long mixed hungry young players with experienced veterans. It is the combination of the Class of ‘92’s youthful exuberance and star power of Eric Cantona and Roy Keane that led to the club’s turnaround and successes. The 1999 treble was proof that Ferguson’s combination of youth and experience could win trophies at the highest level.

Although Beckham, Giggs, Scholes, Butt, and the Neville brothers achieved incredible playing success, they were not the only members of the full Class of ‘92. The 1992 FA Youth Cup winning team had other not so notable names in the team that were expected to make it in the Manchester United senior squad.

Goalkeeper Kevin Pilkington was the backbone of the trophy winning youth team but couldn’t breakthrough at Old Trafford. He left the club for good in 1998 spending much of his career in lower league football. John O’Kane turned out to be a journeyman defender while George Switzer spent much of his career in non-league football. Defender Chris Casper bounced around before retiring in 2000.

Perhaps the most successful players to come through the 1992 FA Youth Cup team outside the sextet were Simon Davies and Robbie Savage. Davies went on to coach in the Manchester City Elite Development academy. He looked likely of making it at Old Trafford and showed early promise as a Red Devil. However, he hit a development ceiling and ended up becoming a journeyman footballer.

Savage is now a popular TV pundit but in 1992 was a forward that helped Manchester United win the FA Youth Cup. Listen to Savage speak and it is as if he spent much of his career at Old Trafford. Although he was offered a professional contract, Savage never got a game at the club and moved on. He still carved out a career and was the most successful of any of the FA Youth Cup winning players not to make it in the senior squad.

The Class of ‘92 success

The late 1990s and 2000s were hands down the most successful years in Manchester United history. The club won 14 Premier League titles under Ferguson between 1993 and 2013. That 20-year timespan saw the Red Devils dominate the Premier League and win a clutch of cups in other competitions. Most significantly in terms of the Class of ‘92, Manchester United won the Champions League in 1999 in an epic come from behind victory against Bayern Munich. The European Cup was the cherry on top of the icing as the Red Devils won the Premier League and FA Cup in the same season.

In many ways, the treble was the beginning of the end. By the time Manchester United secured their most recent Premier League title, only two of the six members of Fergie’s Fledglings, Scholes and Giggs, were still at Old Trafford. Scholes and Giggs had stood the test of time having stayed on Ferguson’s good side.

Beckham was the first of the legendary Red Devils sextet to leave Old Trafford. In 2003, after his relationship with Ferguson had deteriorated beyond repair, Beckham accepted a transfer to Real Madrid. According to Ferguson’s 2013 autobiography, he felt Beckham had lost focus on football and was more interested in living the life of a celebrity.

Butt followed Beckham out the door the next year. Although still a capable midfielder and trusted member of the Red Devils, Butt was frustrated with only playing a handful of games each season. He didn’t want to play a mere 25 to 30 matches and decided to go elsewhere. Butt ended up at Newcastle United playing a major part in the team in spite of not winning silverware. The midfielder spent six seasons at St. James’ Park.

Phil Neville also left the club seeking more opportunities elsewhere. In 2005, Neville joined Everton for £3.5 million after spending 12 years at Old Trafford. When he left, Neville was still in his prime at 28. According to defender, he decided to leave the club after Ferguson spoke to him, not as a manager, but like a father. Ferguson was happy to keep Neville around as a squad player, but actually convinced the full-back he needed more from his career. Neville went on to have eight successful seasons at Goodison Park before retiring.

For Giggs, Scholes, and Gary Neville, they were all three able to end their careers as one club men. Their loyalty and continued performances landed them legends status at Manchester United, although nowadays, all six are considered greats for their achievements. 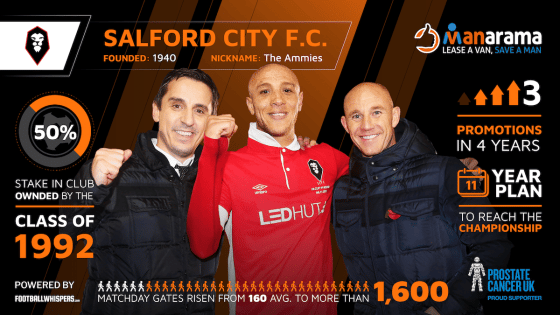 The ties between the Class of ‘92 have never been fully cut. In fact, they may be stronger than ever today. In 2014, Butt, Scholes, Giggs, and the Neville brothers invested in Salford City Football Club. The group were interested in investing into a team and when the opportunity came about to purchase the tiny semi-pro team in Manchester, they jumped at the chance.

Since buying into the club, Salford City have been a phoenix rising through the football pyramid. They started out in the Northern Premier League Division One North and in 2017, after gaining promotions to the National League, became a full-time professional club.

In 2019, Beckham joined his former teammates and bought a stake in the club. Just months later, Salford City were promoted to League Two for the first time ever. The Ammies are now just three promotions away from rubbing shoulders with Manchester United in the Premier League.

Enjoy this article? Try reading up on the best football betting tips for today's games. With odds from bookmakers like bet365, Betfred and Unibet.