Man City could go top of the Premier League this weekend if they can manage to beat Burnley at home and providing results elsewhere go in their favour. Burnley have not had much luck against Man City over the years and Sea Dyche's men will have to be at their very best to stand any chance of even picking up a point on Saturday.

Here are our predictions for Man City vs Burnley.

We're expecting plenty of goals in this game as three of the pair's last five meetings have produced at least five goals. City have put three or more goals past Burnley in four of the duo's last five encounters in league and cup, so you can see why we're backing over 3.5 goals on Saturday. Three of Man City's and three of Burnley's last six matches in all competitions have witnessed at least 4-goals scored.

Gabriel Jesus hasn't always been the first choice at Man City but he has started the new season well and joint top scores in the Premier League for the home side with 2-goals. We're expecting a big performance from Man City and that means there should be a lot of goalscoring opportunities in the game. Jesus scored the winner against Chelsea and we expect him to start at home to Burnley and get on the scoresheet.

Man City backed for a comfortable home win this weekend

Man City twice came from behind at Anfield to salvage a point before the international break but to make that result worthwhile they have to beat Burnley on Saturday. The title race looks likely to be between the current top four sides this season, Chelsea, Liverpool Man City and Man Utd, so Guardiola's men need to be winning these types of games with relative ease to keep the pressure on the teams around them.

Burnley became the first team this season to fail to beat Norwich as the pair played out a goalless draw at Turf Moor. Sean Dyche will be disappointed with his side for not finding a way through a usually leaky Norwich defence but will no doubt try to use his sides clean sheet as a positive to build upon. However, an away trip to Man City is highly unlikely to produce another strong defensive display from Burnley but that is what it will take to pick up a positive result this weekend as they can't match Guardiola's side in an open, attacking, end-to-end contest.

Man City: Zinchenko and Gundogan could return to the Man City squad this weekend but both will have to pass late fitness tests.

Burnley: Sean Dyche will be hoping to welcome back Cornet, Mee and Gudmundsson ahead of the trip to the Etihad but Stephens remains sidelined through injury.

Man City vs Burnley: Your Questions 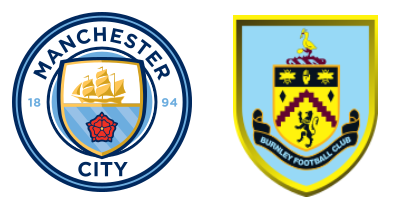