FA Cup finalists, Leicester City turn their attention back to the Premier League this week and the hunt for a top-four finish. Providing the opposition on Thursday night are a West Brom side battle against relegation and in the midst of a mini winning run, so we're expecting a close and competitive 90-minutes between the two clubs.

Read on for our full match preview and prediction for Leicester vs West Brom in the Premier League.

We're not expecting goals at both ends of the pitch in this game and could possibly see the game ending goalless. Both teams have scored in just two of Leicester's last five matches, as well as in one of West Brom's last six fixtures.

Under 2.5 goals have been scored in three of the last five encounters between these two clubs. Leicester's last game produced under 2.5 goals as has four of West Brom's last six outings in the Premier League, so you can see why we're expecting another tight and tense 90-minutes on Thursday.

West Brom haven't won any of their last four competitive meetings with Leicester but have managed to secure one win and two draws in their pair's last six head-to-heads. Leicester had a huge FA Cup semi-final at the weekend while West Brom weren't in action and we believe this could play into the visitors' hands on Thursday. West Brom have won two, drawn one and lost one of their last four outings in the Premier League and look much stronger at the back these days.

All the stats you need ahead of Leicester vs West Brom

Can Allardyce lead the Baggies to three straight wins?

Leicester made it through to the FA Cup final on Sunday and are hoping it will be the fifth time lucky in the oldest club competition in world football. However, the Foxes must turn their attention back onto the Premier League and the ongoing battle for the Champions League places. Leicester have lost their last two league games and go up against a well-motivated and in form West Brom on Thursday night, so will need to be at their best in what is expected to be a tough game. Barnes and Justin have been ruled out of Thursday's clash through injury, while Morgan could return if he passes a late fitness test.

West Brom followed up their fantastic 5-2 win over Chelsea with a 3-0 victory over Southampton and the club and their manager must surely believe they can still escape the drop if their form continues. As things stand, West Brom have a game in hand on the teams around the, two over Fulham, but still remain 9pts from safety and really need to win at Leicester. The only injury concern for the visitors is Ivanovic, who looks like he will be out for a few more weeks yet. 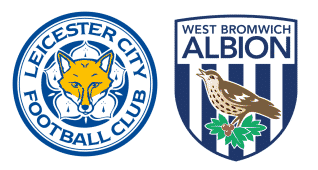