The two sides of the Premier League ranking will be clashing in the upcoming weekend. This article aims to provide you with the best free betting tips on the match-up and inform you of the club's general form.

This is our experts’ take on the game, made considering key information available for both sides during the creation of the article.

The odds are true at the time of writing but note that they are subject to constant change. Finalize your betslip with caution. Our recommended bookmaker for this match is Ladbrokes.

Leicester To Win to Nil

It's no secret that Sheffield United has had a dreadful season, and is quite a way off the form it had during the previous campaign. The Blades boast the weakest attack in the PL with just 16 goals in 28 games. Additionally, Leicester has allowed 5 goals total in their last 3 matches. Getting a clean sheet versus a weak attack isn't out of the ordinary because the Foxes will be hungry to get a clean sheet. And Leicester isn't one of the sides that will let this go through. This betting selection provides greater value in terms of odds than just picking Leicester's win.

Being the clear favorite, it's just a matter of how sharp the Foxes' attack will be. They have the upper-hand in terms of goal-scoring force, and we will be looking at them to make this bet work. We believe a 4-0 result isn't out of the picture, at this stage of the season. Furthermore, we already clarified that Leicester tends to allow goals sometimes (5 in the last 3) but Sheffield does too. In their last 5 competitive matches, the team has conceded 8 goals.

Jamie Vardy to Score at Anytime

If you are familiar with Jamie Vardy, you know that the lad is born in Sheffield and is a lifelong fan of Sheffield Wednesday – The Blades' greatest Rival. Although Vardy hasn't got the chance to represent the Owls professionally, you can be sure that he will fancy scoring against Sheffield United. The odds are also looking fine. Also, the last time Vardy scored was on 13.02 versus Liverpool. We are certain he will be motivated to get back to his scoring ways as quickly as possible He has scored 12 EPL goals this season which is definitely not good enough for a player of his caliber.

Leicester City vs Sheffield United: What do the odds and stats say?

Take a quick look at the numbers behind our free predictions of the match. See the stats, get all the info.

To preview the game clearly, we have to take a step back and see where in the league ranking are the two clubs posturing.

Leicester is currently sitting at the healthy third spot, with just a single point in deficit to Manchester United. An attempt at the trophy isn’t out of the picture, but this means that winning versus Sheffield is a must. The Foxes recently dropped points in a loss against Arsenal and a draw with Burnley, this is why they will come in this game looking for the three points and nothing less.

On the other hand, the Blades recently managed to get a 1-0 win across the board. On top of that, it was against the flying-high Aston Villa and with a man less.  However, this sums it up for Sheffield's last five games, with the other four having a combine 8-0 score against the Yorkshire side. The outcome of this match is inevitable, even if it may not be by the likes of Chris Wilder and his squad.

FAQ for Leicester vs Sheff Utd 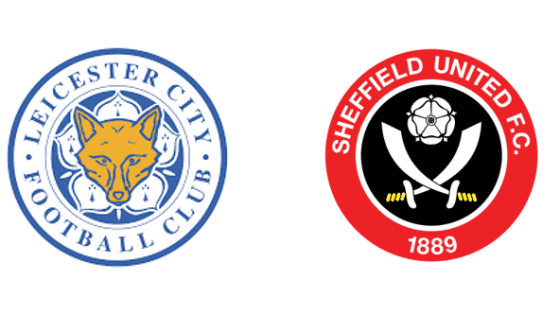 Who is the favorite? – Leicester City is the undisputed favorite in this match.

How many Premier League rounds are left? – After the current 28th round is played, there will be 9 more rounds played.

Where can I get more EPL betting tips? – Just follow our main English Premier League page for expert predictions.