When selecting an all-time eleven, perhaps the most difficult task is avoiding generational bias. Historic football matches, while intriguing, offer vastly divergent spectacles to modern games; the athletic and physical abilities of the individual players are more impressive now, what with all their information on nutrition, technology, data and fitness regimes, and modern teams are arguably generally more systematised than their predecessors. It’s always easier to favour today’s greats.

Leeds United have had three distinct noteworthy eras of differing lengths and levels of greatness. The iconic side of the 1960s and ‘70s that won consistently both at home and abroad under Don Revie are undoubtedly the finest team the club has ever produced. Howard Wilkinson’s Leeds of the early 1990s won one championship, while David O’Leary’s side of the late 90s and early 2000s threatened to achieve big things without ever really fulfilling their potential.

Across these three eras, many exceptional players have worn the Yorkshire side’s pristine white kit. And, before, after and in-between these eras, there have been individuals who were perhaps let down by their playing for Leeds during a less successful period. What follows is an attempt to pull together an all-time Leeds eleven from across the club’s up-and-down history.

When Nigel Martyn signed for Leeds in 1996 his transfer fee of £2.25 million was a British record for a goalkeeper. And, with sharp reflexes and agility, he remained the club’s first choice throughout the late 1990s and early 2000s, playing a pivotal role in their UEFA Cup semi-final run in 2000 as well as their march to the Champions League semi-finals the following year.

He perhaps goes down as one of the most underrated ‘keepers of modern times, mainly due his playing second fiddle to David Seaman at national team level throughout his career.

Paul Reaney was undoubtedly the least glamorous member of Revie’s great Leeds side. Fast, efficient and incredibly energetic, his indefatigable presence on the right touchline made him a core presence, even if he lacked the skill of some of his team-mates.

A strong, direct runner, he contributed in an attacking sense whilst remaining sound defensively and his consistency and longevity was exceptional – he retained his right-back spot for over fifteen years.

In 1961 a daring teenager turned up at Elland Road and asked, presumably with hope rather than expectation, for a trial. The teenager’s name was Terry Cooper, and he would not only earn a deal with Leeds, but would go on to become the club’s greatest ever left-back, renowned for his vibrant attacking runs and audacious white boots.

Cooper also left a lasting legacy in a tactical sense; his forward raids down the left hand-side, both underlapping and overlapping, were a key part of Revie’s Leeds’ attacking arsenal and set a trend that future full-backs would follow. 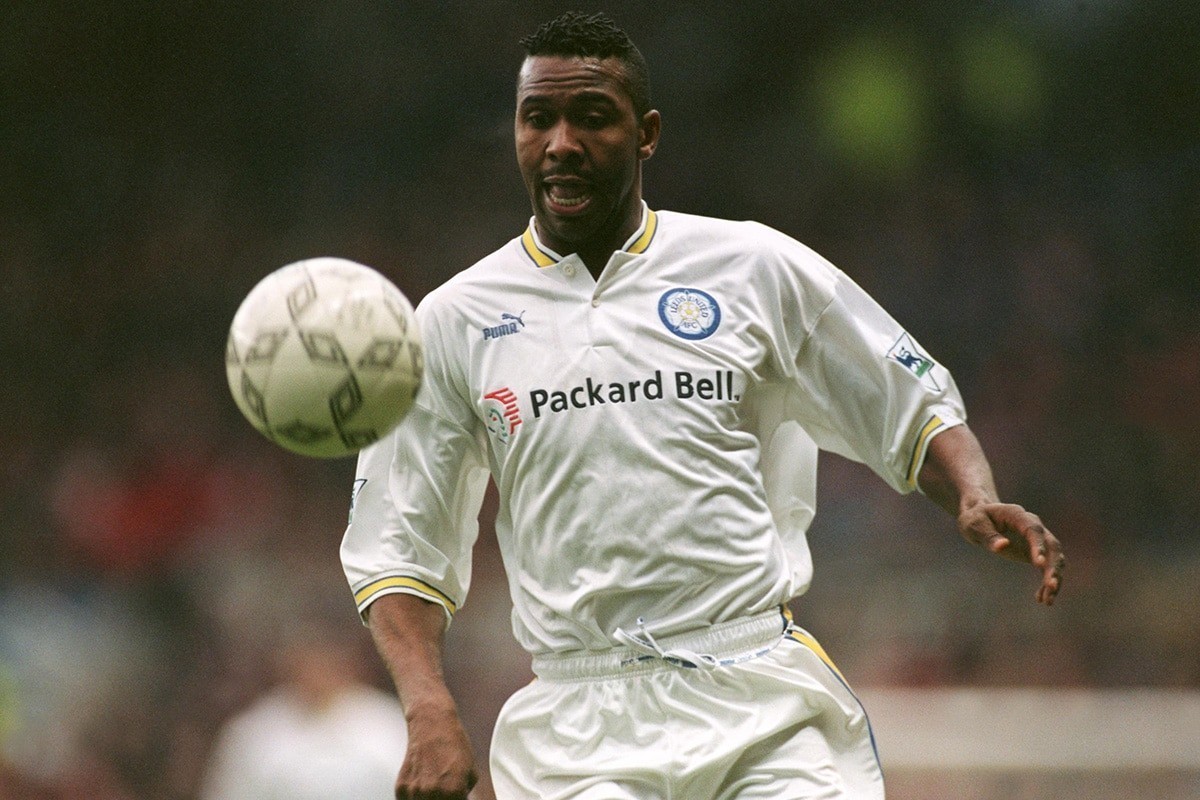 Signed as a makeweight in a deal to bring fellow South African Philemon Masinga to Yorkshire, it’s fair to say expectations weren’t particularly high for Lucas Radebe at Leeds. His first appearance came as a substitute right midfielder and it wasn’t until George Graham became manager that the player would begin to truly find his feet in English football.

Converted to centre-back, he soon became club captain, flourishing as the defensive leader. Fast and an attentive marker, Radebe also had great timing in the tackle, all of which made him almost unbeatable in one-on-one situations. He remained hugely influential during O’Leary’s time in charge and inspired a local band, Kaiser Chiefs, to name themselves after his former club.

Known as ‘Bites Yer Legs’, Norman Hunter’s nickname didn’t do justice to his all-round ability. A brave, uncompromising and at times cynical central defender, his reputation as a hard man overshadowed his ability on the ball.

He had sound technique and could build possession well from the back with his left foot, was fast and had a good understanding of the game, something which – when coupled with his firm approach to stopping opponents – made him a complete defender.

Arriving at Leeds from Manchester United at 33 years of age for a £300,000 fee in 1989, Gordon Strachan didn’t seem like a particularly revolutionary signature at the time. But, over the following five years the Scotsman would help to lead the club’s resurgence in the late 1980’s and early ‘90s.

An experienced midfielder with endless reserves of stamina and a relentless approach to the game, Strachan became Wilkinson’s leader on the pitch from the right wing as the team won promotion in 1990 and the First Division title two years later. 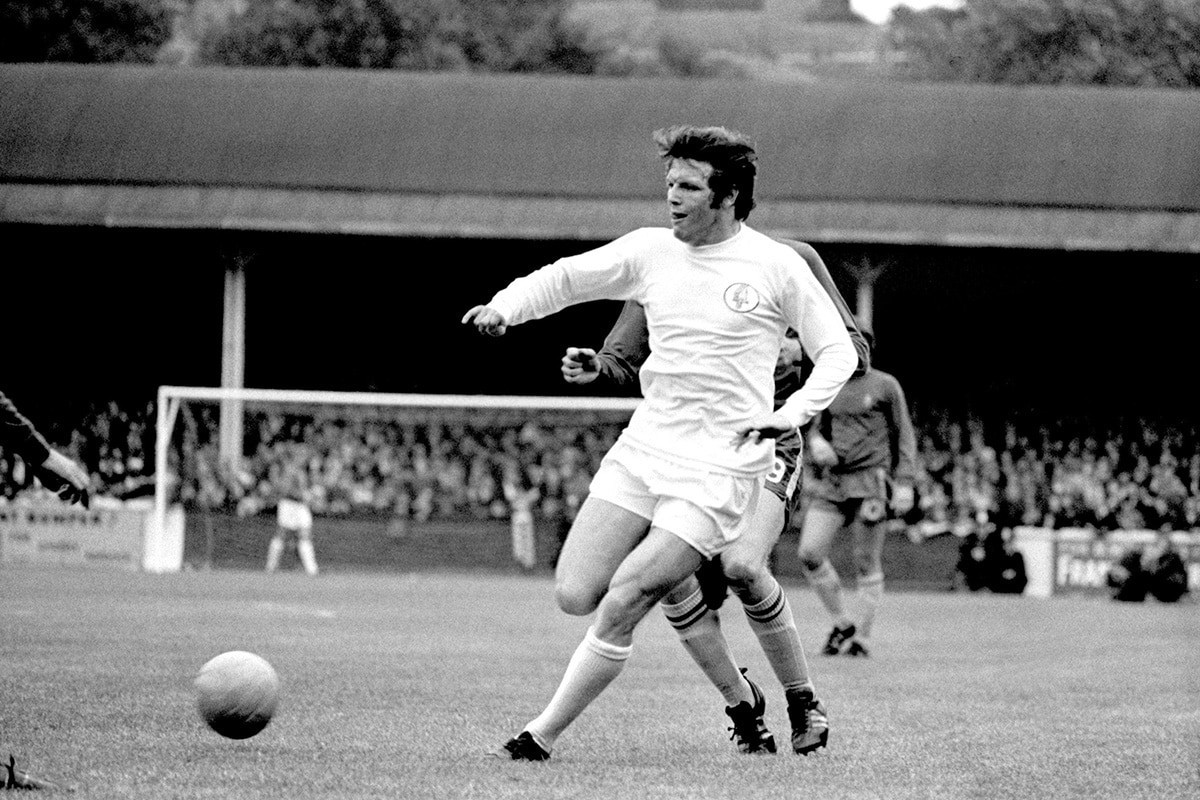 A lithe winger blessed with dazzling trickery, Eddie Gray’s elegant runs were the most aesthetically pleasing feature of Revie’s Leeds side. Tall, skinny and playing with a slight hunch, the Scottish left-footer’s looks deceived, as countless beaten opponents could testify to.

Technically refined and perfectly balanced, Gray brought a sophisticated touch to a team built primarily on practicality and efficiency.

Feisty, rugged and passionate, Billy Bremner was the ideal Leeds captain. He was Revie’s enforcer on the pitch, a commanding midfield conductor who performed fearlessly and acted as an inspiration during the club’s greatest era

While notorious for his battling spirit, the Scotsman was also technically adept, a fine passer, a tenacious tackler and a non-stop runner. He formed a formidable central midfield partnership with Johnny Giles; the pairing’s combination of tactical intelligence and unshakeable desire for victory making them hard to both get past and stop.

Diminutive, fleet footed and quick-thinking, Giles was the unsung hero of Revie’s Leeds, diligently probing the midfield, snuffing out opposition attacks and building moves. He joined the club from rivals Manchester United in 1963 for a fee of £33,000 and went on to become one of the finest signings in English football history.

His slight physique belied a combative streak which allowed Revie to transform him into a central midfielder having spent much of his early career out on the wing. Next to Bremner, Giles would go on to patrol Leeds’ midfield throughout the 1960s and ‘70s. 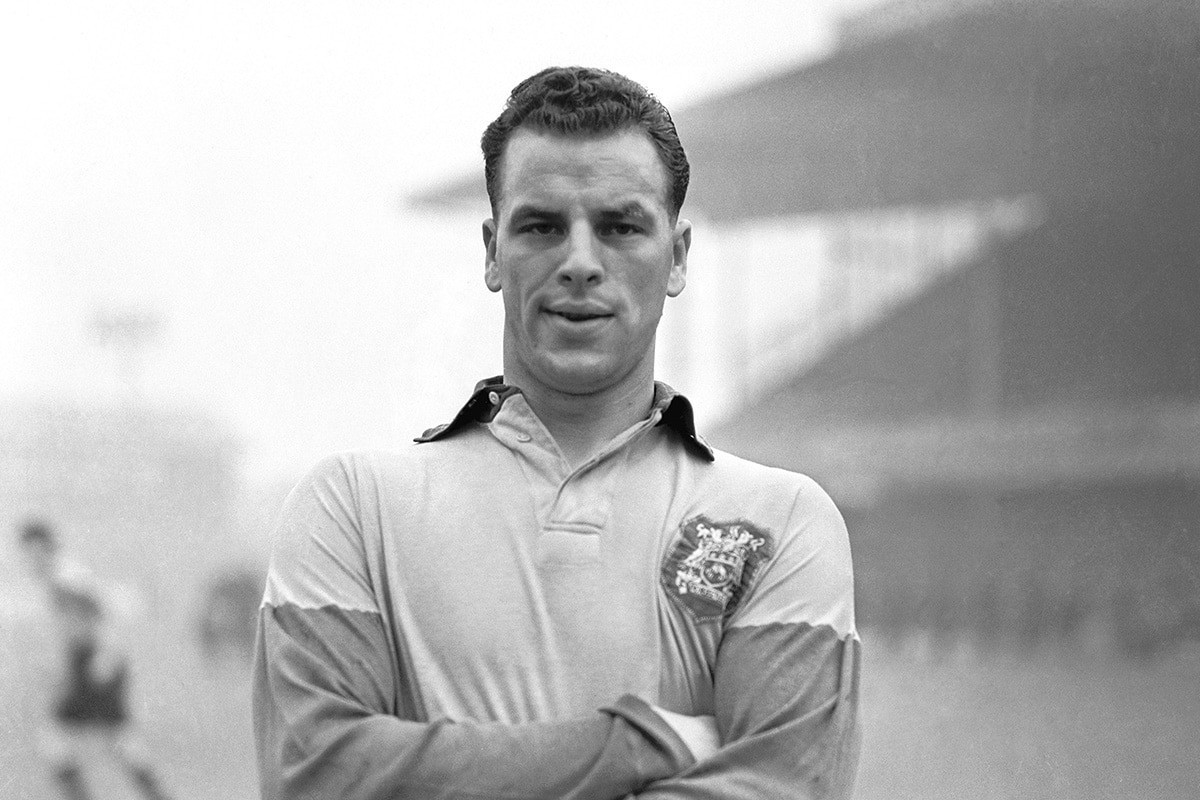 Strong, fast, powerful and tall, standing at 6’2”, John Charles started out, perhaps unsurprisingly, as a centre-back after joining Leeds from Swansea as a teenager. However, following the rise to prominence of a young Jack Charlton in the early 1950s, Charles was used as a centre-forward.

His hulking presence, aerial ability, aggressive running and nose for goal made him one of the finest finishers in the world at the time and, after scoring 38 goals in 40 games in 1956-57, he moved on to Juventus, where he became known as ‘Il Gigante Buono’, or ‘The Gentle Giant’. He stands as Leeds’ all-time second-highest scorer, with his 157 total bettered only by Peter Lorimer.

Allan Clarke is best known for scoring arguably the most valuable goal in Leeds’ history: the winner in the 1972 FA Cup final against Arsenal. He was widely viewed as a crucial piece in Revie’s puzzle, bringing a genuine goal threat up front upon his signing from Leicester City for £165,000.

Earning the nickname ‘Sniffer’ for his poaching instincts and ability to find scoring opportunities, Clarke went on to score 151 goals for Leeds in all competitions, striking up a highly effective partnership with the hard-running Mick Jones.