When disaster struck on an icy runway in Munich on February 6th 1958, not only did a group of young men lose their lives; but a football club stood on the brink of extinction. But thanks to the determination of one man Manchester United would rise once again from the ashes and eventually achieve their dream of conquering Europe.

United had been to Yugoslavia to play in the relatively new European Cup against Red Star Belgrade and following a creditable 3-3 draw – which saw them progress to the semi-finals of the competition 5-4 on aggregate – the squad, as well as others on board, set off for home the following day.

Their plane had stopped in Munich on a scheduled stop but engine issues led to two aborted takeoffs following refuelling in the most horrendous conditions. By they attempted a third time, snow and ice had meant the runway was now covered in slush, and unable to gain enough speed, the aircraft crashed through a fence at the end of the runway and into a house, before bursting into flames.

The crash took 23 lives. Seven players died at the scene – Duncan Edwards passed-away in hospital a fortnight later, Johnny Berry and Jackie Blanchflower were so severely injured that they would never play again while Matt Busby would spend two months in hospital and was twice given the last rites. Others, including Bobby Charlton, were gravely injured but would eventually recover.

But one figure who wasn’t on the plane that day was Jimmy Murphy, a man who, though not as well known, was just as important in the history of Manchester United as Matt Busby himself. While Busby was undoubtedly the boss, fiery Welshman Murphy was the man who worked with all the young players from the moment that they arrived at the Club, nurturing them, harnessing their talent and preparing them for life as a footballer at Old Trafford.

He had been in charge of the inaugural Youth team set-up at the club in 1952 and for the first five years of the F.A. Youth Cup competition, the teams that he fielded were unbeatable – their record of five successive F.A. Youth Cup wins has never been beaten even to this day.

Many of these young players would eventually become household names in British football, graduating to the first team and being known as the “Busby Babes” as they looked to conquer all before them. Having won the league the previous season, Busby and his “Babes” now had their heart set on winning what is now considered the holy grail of football, the European Cup with many feeling glory was merely a foregone conclusion. 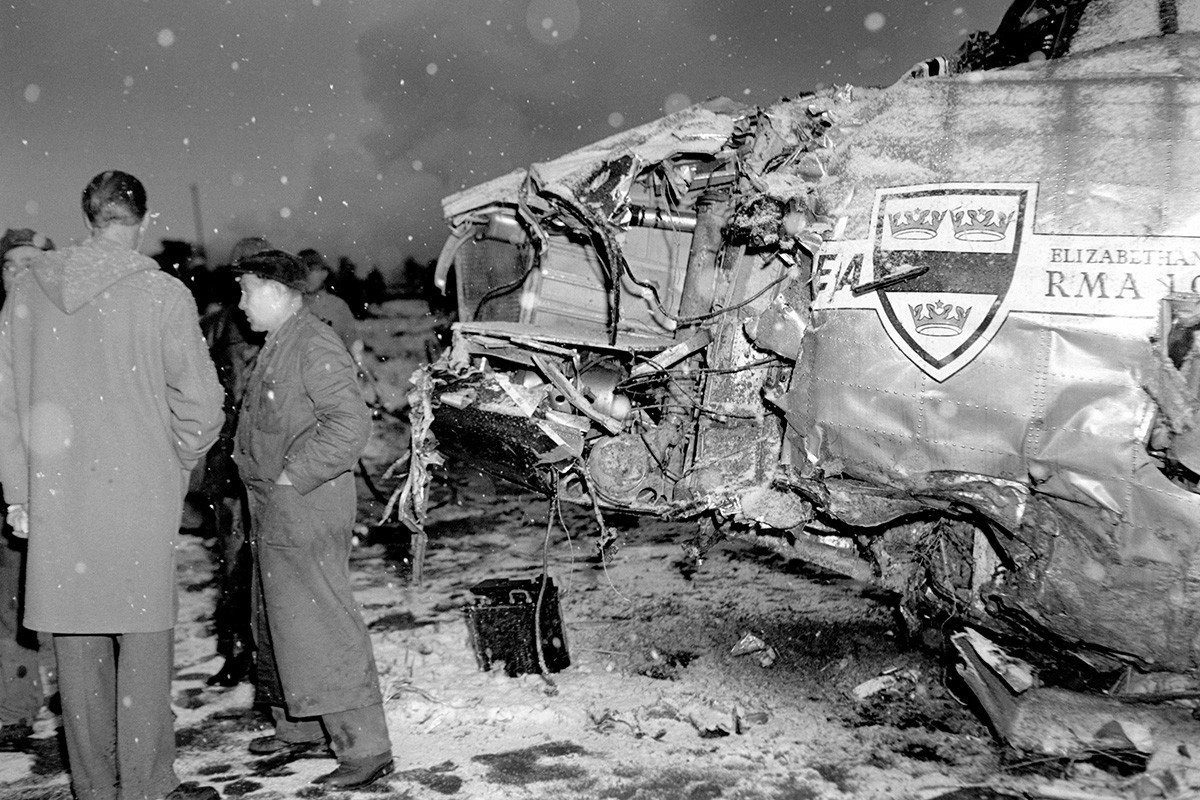 This newly created competition had only been in existence for a couple of years and many British clubs were not convinced, deciding to opt-out, rather than put up with the inconvenience such a tournament would bring. But Busby was an innovator and saw the potential in playing in such an exciting new competition, he didn’t want his side to be just the best in the land, he wanted them to be the best in Europe too.

In fact, United had been England’s first ever representatives in the European Cup in 1955 following the withdrawal of Chelsea and had reached the semi-finals at their first attempt; but with that experience under their belts, combined with a crop of young, talented players, the 1957/58 campaign looked to be their best opportunity to achieve continental success.

In the early rounds they had made easy work of Shamrock Rovers and then Dulka Prague, setting up an eagerly awaited quarter-final tie with the champions of the former Yugoslavia, Red Star.

The home leg at Old Trafford had been a hard-fought encounter but United came through with the narrowest of margins, eventually running-out 2-1 winners and giving themselves a vital lead to take to Belgrade in the second leg. In the snow and bitter cold of a Balkan winter United eventually secured a thrilling 3-3 draw, which was enough to see them progress to the semi-finals in what appeared to be an unstoppable march towards European domination.

For the majority of those players though, their careers, European adventures, and ultimately their lives were just a few hours away from being over.

As well as chasing European glory United were still very much in the hunt for the League Championship that year too, meaning there would be no time to celebrate their victory, as a flight back to England awaited them the very next day – a flight which would never reach its final destination.

Jimmy Murphy had not travelled to Belgrade with the team for that second leg because, as well as being Busby’s assistant, he was also the Wales team manager and they had a World Cup Qualifying tie against Israel the day before United’s game with Red Star. Murphy was not to know just how that arrangement was to turn out and what implications it would ultimately have for himself personally and the club.

His Wales side had won their play-off with Israel, meaning they would progress to the finals of the World Cup for the first time, but for Murphy it was back to business as usual as he arrived at Old Trafford the next day to meet up with the squad following their trip to Belgrade; but as he arrived back to a strangely deserted stadium it was left to the manager’s secretary to break the terrible news about what had happened to his players, colleagues and close friends.

“It had been a long, tiring journey back to Manchester and I poured myself a glass of Scotch,” he explained some years after. “Alma George, Matt’s secretary, came in and told me about the crash.”

“I didn’t take it in at all, Alma said, ‘I don’t think you understand. The plane has crashed. A lot of people have died.‘ She was right. I did not understand. So she told me a third time and this time she started to cry. A good few minutes had elapsed and suddenly Alma’s words began to take effect on me. I went into my office and cried.”

There was little time for grieving though and it was now up to Murphy to keep what was left of Manchester United afloat. He was thrown in at the deep-end, having to keep abreast of the state of Busby’s stricken youngsters, signing emergency players at very short notice and having the arduous task of rearranging fixtures and making sure the football club continued as close to normal as was possible.

When Murphy went to visit Busby in his hospital bed the United manager was only able to whisper a few words to his trusted number two: “Keep the flag flying Jimmy,” something which Murphy needed no further encouragement to do, despite the awfulness of the whole situation.

Writing in his autobiography Murphy explained: “As my mind dwelt on the full appalling horror of it all I thought I would go mad, although I was doing my best to think about the future.” And look to the future he did, relying on youngsters as well as signing experience in the form of Ernie Taylor and Stan Crowther to keep United’s season alive.

Murphy got straight down to work and recruited a whole new team as he attempted to create a what resembled a Manchester United side once again while still trying to attend as many funerals as he possibly could. Just 13 days later, he led out a new United team at Old Trafford in an FA Cup tie against Sheffield Wednesday  – even the programme that night couldn't publish names for the home side as they didn't know who they would be.

Amazingly, that cobbled-together United team defeated Wednesday 3-0 with a team made-up of juniors and reserves such as Ian Greaves, Freddie Goodwin, Ronnie Cope, Colin Webster, Alex Dawson, Stan Pearson and Shay Brennan. Brennan scored twice on his first appearance that night and would eventually go on to play in the 1968 European Cup final ten years later.

Although they would only win one more game in the league that season and finish the season in 9th place, Murphy had somehow got his team to Wembley and an FA Cup final against Bolton. Now out of hospital and there to watch United that day was Matt Busby, walking with the aid of crutches, just three months after he diced with death in a Munich hospital bed.

United came-up short against Bolton in that final, eventually going down 2-0 to two Nat Lofhouse goals; but just the fact that they were there was an achievement in itself. The club carried on in the European Cup, despite holders Real Madrid offering to award United the trophy as a mark of respect.

They defeated AC Milan at Old Trafford, before eventually losing out on aggregate at the semi-final stage. However, a mid table finish in the league and an FA Cup final at Wembley was still incredible considering the tragic circumstances that had taken place just months earlier. 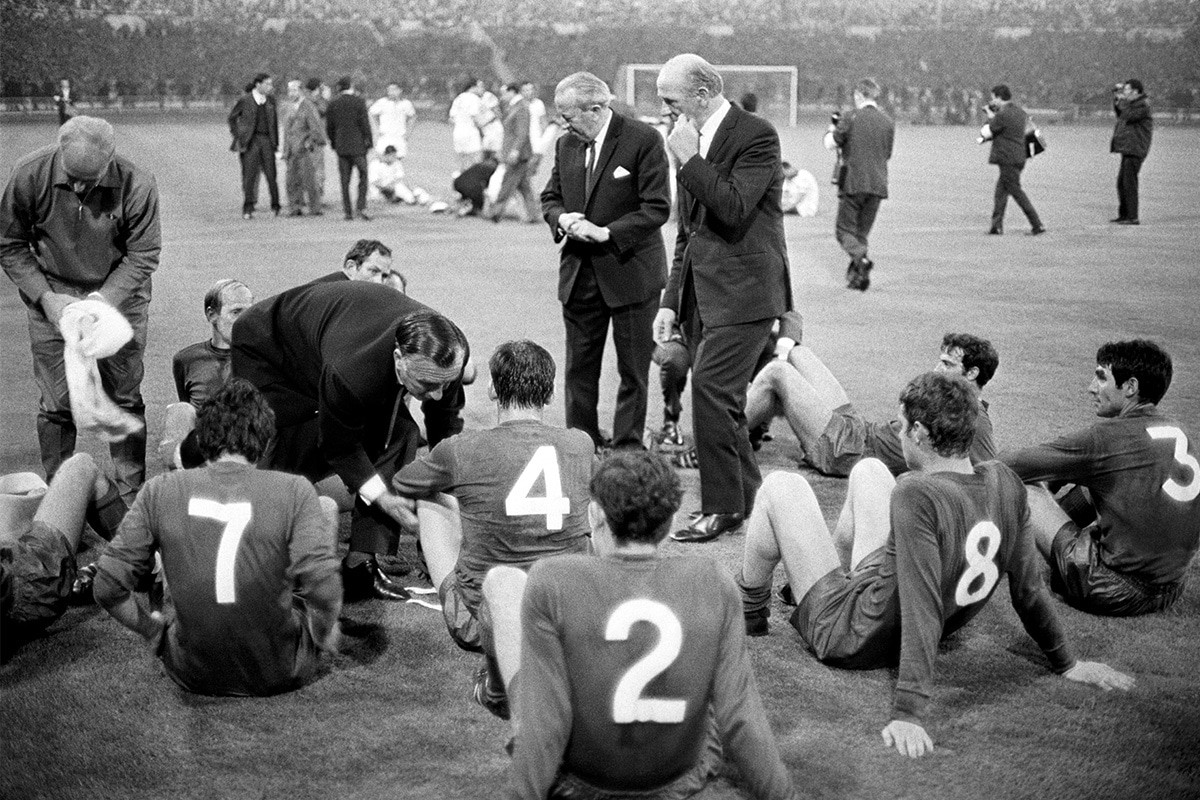 Matt Busby finally returned to his duties the following season to continue the rebuilding job started by Murphy’s hard work and determination, finishing second in the league in his first season back while Murphy would carry on alongside him and, unbelievably, the team they assembled was every bit as successful as the team that was lost in 1958.

And so it was, just ten years after the crash, Manchester United finally lifted the European Cup at Wembley after beating Benfica 4-1 on a hugely emotional night for everyone involved with the club following what the club had come through a decade previously.

In the team that night were a number of players Murphy had had a huge impact on, not least Bill Foulkes. Foulkes was on the plane that fateful night in Munich, but escaped with only minor injuries; going on to be named captain during those early days of the rebuilding process.

The man who lead the team up the Wembley steps to lift the European Cup that night at Wembley was none other than Bobby Charlton, another survivor from Munich who Murphy had nurtured after he arrived at the club as a teenager from the north-east and a man who said of the Welshman: “Whatever I have achieved in football, I owe to one man and only one man – Jimmy Murphy.”

The transformation of Manchester United under the guidance of Murphy was astonishing. Picking up the pieces from a devastating accident he managed to reconstruct a team that conquered Europe from virtually nothing and left a mark on the hearts of many around the world in the process.

Murphy worked under Busby as his assistant until 1971, though continued his association with the club as a scout for United in an unofficial capacity under Tommy Docherty and even after his retirement he would still regularly go down to the training ground to talk to scouts and coaches just to be around the club and the people he loved.

Murphy died in November 1989, aged 79, yet incredibly he is still seen as something of a forgotten man. He may not be held in such high esteem as Alex Ferguson, Matt Busby or even some of the greats who have worn the famous red shirt; but he should arguably be talked about in such company as there is little doubt that he was the guiding light that did indeed keep the flag flying in the club’s darkest hour while setting Manchester United on a path for which so much of their more recent success has been built.