Italy have been fantastic to watch in Group A and have qualified for the knockout stage with a game to spare. Wales are practically through at the time of writing this preview but Robert Page has said he will start his best team against Italy, while the hosts have the option to rotate.

Read on for our full match preview and prediction for Italy vs Wales in the European Championship.

Now, we're going to assume that Italy will rest some or maybe even all of their usual starting eleven for the final group game, due to the fact that they have already secured their spot in the next round. The Italian's have kept clean sheets in each of their last ten international matches and under 2.5 goals have been produced in five of Wales' last six outings. Italy are the big favourites to win but if they do make a number of changes as we expect, then this game is likely to be low-scoring.

Much like the above prediction, a draw between these two countries depends on the strength of Italy's starting eleven. We believe that Mancini will rest some of his players, maybe even all of his starting eleven, due to the fact that his captain Chiellini tweaked his hamstring against Switzerland and now that Italy have qualified for the next round, he doesn't need to risk any other injuries. Wales have a strong defensive record, keeping clean sheets in four of their last six matches, while Italy haven't conceded a goal in any of their last ten outings.

A goalless draw is the most likely way that Wales are going to get anything from this game. Italy have the home advantage but an injury to their captain Chiellini might make Mancini rest his other star players to avoid any further injuries to his star players. Both of these countries pride themselves on their defensive ability and that has shown in their recent results. Wales have kept four clean sheets in their last six attempts, while nobody has scored past Italy in their last ten matches.

All the stats you need ahead of Italy vs Wales

Italy have already qualified and could rotate their squad

Italy look like the real deal in Euro 2020 and their opening performances suggest that they could go all the way and win this competition. Last time out, Mancini's last thrashed Switzerland 3-0, the same scoreline they beat Turkey by in the tournament's opening fixture. Before these last two results, Italy had never scored more than two goals in any of their previous matches at the European Championship and the fact they are keeping clean sheets, only makes them look even more intimidating to their opponents. Losing Chiellini with a potential hamstring injury is a massive blow and they will be hoping that the Juventus star can make it back for the latter stages in what could be his final major international tournament.

Wales played with so much passion and desire against Turkey, you could see that they wanted the win more than their opponents. Goals from Ramsey and Roberts secured a 2-0 victory and put Wales on the brink of qualification for the knockout stage. Even a defeat to Italy would likely see Wales qualify for the next round, even if Switzerland beat Turkey and Wales finished as one of the four best third-placed teams. Manager Robert Page has stated that he intends to play his best team against Italy and if he does then Wales are in with a chance of securing a draw from this game and claiming second spot in the Group A table.

With Wales likely to start with the same eleven that beat Turkey, we're going to have a look at the potential starting eleven for the already qualified Italy.

Mancini might go with Meret or the more experienced Sirigu in goal, while a combination of Toloi, Emerson, Acerbi, Bastoni, or Di Lorenzo could make up the back-four. In midfield, Castrovilli, Cristante, and Pessina will be hoping to see some action against the Welsh. Up-front the Italians have options in the form of Belotti, Bernardeschi, Chiesa, and the 21-year-old Raspadori. All, with the exception of one of the goalkeepers, are likely to feature at some point in this game, unless Mancini prefers to play his strongest side of course. 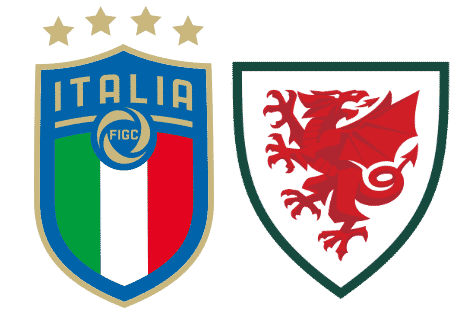