Italy secured their 100% record in the group stage courtesy of a 1-0 win against Wales and are yet to concede a single goal, so you can see why Roberto Mancini's men are being backed to go all the way at Euro 2020. Standing in the Italian's way in the first knockout round are Austria, who have looked decent in this tournament but failed to impress when coming up against a bigger nation in the form of the Netherlands.

Read on for our full match preview and prediction for Italy vs Austria in the European Championship.

Italy are in the midst of a winning and clean sheets run that spans back 11-matches. Yet to concede at Euro 2020 and winning all their group games, you can see why we're backing Italy to win-to-nil against an Austria side that lost 2-0 in their toughest group game against the Netherlands. Austria have failed to score in four of their last six matches and now face a really strong and confident Italy defence.

Over 2.5 goals have been scored in four of Italy's last five matches, with the Italians winning two of their group games by three goals to nil. Two of Austria's last six international matches have produced over 3.5 goals with one of those being a 4-0 defeat to Denmark. Another reason we are expecting goals in this game is down to the fact that four of the last six meetings between these two nations have witnessed at least three goals being scored.

Italy claimed 3-0 wins against Turkey and Switzerland during the group stage, the first time the country has scored more than 2-goals in any European Championship fixture. Roberto Mancini rested some players against Wales but will be back to near full-strength for the game against Austria and we're backing the Italians to dominate this game from start to finish, securing another 3-0 win in the process.

All you need to know ahead of Italy vs Austria

Alternative predictions: What to back if you fancy Austria

Italy are the heavy favourites to win this Euro 2020 clash but if you fancy Austria to do something that they have never managed to do before and beat Italy, then here are some of the markets you might want to back.

The Pressure is on Italy to extend winning run

Italy look like the real deal at Euro 2020, despite not entering the competition as one of the big favourites to go all the way and claim the title. Roberto Mancini's side look strong in all departments and have even dealt seamlessly with the injury to star centre-back Chiellini and right-back Florenzi. Italy had never scored more than 2-goals in any of their previous European Championship games but claimed back-to-back 3-0 victories against Turkey and Switzerland in their opening group games. Even after making a number of changes, Italy dominated their final group game against Wales and could have won by more than one goal to nil.

Austria will be expecting a really tough 90-minutes against Italy and know they must defend well and take any big chances they are fortunate to create. The Austrians have wins under their belt, 3-1 against North Macedonia and 1-0 against Ukraine, but did suffer a 2-0 defeat against the Netherlands. That game against the Dutch was by far Austria's worst performance so far, as they appeared to fear their opponents attacking threat and rarely caused the Netherlands any problems at the back. If they perform like this against Italy then Mancini's side will cruise to victory. 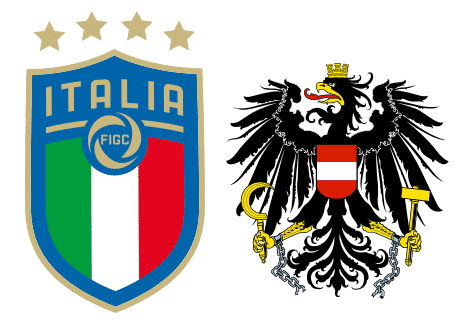