Both Hull and Middlesbrough ended losing streaks in the week. Can either add another three points to their season tally? Find out with our Hull vs Middlesbrough match preview with free tips, predictions and odds mentioned along the way.

We're kicking off our predictions with a draw between Hull and Middlesbrough. Middlesbrough won just their third game in 10 last time out with an impressive display against Sheffield United. Hull haven't ended their winless run, which sits at 10 games in all competitions, but did show some spirit to rescue a point after falling behind in the week. They've recently taken a point off Bournemouth too so they can do it. We think they'll take another one here. Both would probably see that as something to kick on from.

A bore fest? No but don't expect a hatful

If you look at a table of over/under goals averages both Hull and Middlesbrough sit in the bottom quadrant of the 24 teams. Hull sit on 2.1 with Middlesbrough only a tad better off at 2.2. A look at their recent results don't suggest otherwise either. Hull have seen just one of their last five games go over 2.5 with an average of 2.0. Middlesbrough have also only gone over the cut off once in five; their average in that time is – like Hull's – bang on 2.0.

Middlesbrough to open the scoring

Our final prediction for the Hull vs Middlesbrough match is that it will be the away side that notches first. The main reason for this tip is the form shown by Hull across the course of the season. They haven't taken the lead in a competitive match since beating Wigan 3-1 on May 1st; that's a run of 14 games where they've either fallen behind or drawn 0-0. The bore draw has happened twice but with Grosvenor you'll get your stake back if neither team nets in the game so, in our view, a Boro first goal is well worth a stab.

The best odds for Hull vs Middlesbrough

Hull won't exactly be buzzing after their midweek point but it cannot be ignored what an important draw it was for the Tigers. They'd lost three on the spin and had scored just one goal in eight games so when Blackpool went ahead you started to fear the worst for them; they didn't give up though and were rewarded when Keane Lewis-Potter teed up Tom Eaves for the winner late on; it means Lewis-Potter has been involved in 71% of Hull goals this season. Middlesbrough did what nobody expected them to do. Sheffield United had looked decent in recent weeks but Boro turned them over on their own patch in what could prove a big win for Neil Warnock and co. Paddy McNair scored a super strike but the clean sheet will have been appreciated by Warnock just as much.

The final word on Hull vs Middlesbrough 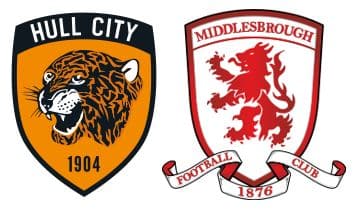