High-scoring football games are rare. But when they come around, they fill everyone watching with a feeling of unbridled joy.

Take, for example, Aston Villa’s 5-5 draw against Nottingham Forest on Wednesday night. It was a game without logic, frantic and breathless. It seemed like the goals might never stop going in.

With that match fresh on the mind, we decided to look back at some of the most memorable – and ludicrously high-scoring – games in English football’s recent history.

Never before, and never since, has there been a Premier League game with 11 goals scored. There had been eight-goal thrillers, nine-goal thrillers, and even the occasional ten, but this was something altogether different.

What made it more remarkable was that, at half-time, it was only 2-1 to Portsmouth. In the second half there was an explosion of goals. Benjani scored a hat-trick and the hosts, eventually, ran away with it.

“It was as if Rugby World Cup fever had swept across the Channel and washed up on the shores of the south coast,” wrote David Ornstein in his match report for the Guardian. “In the oval-ball game this would have gone down as a 35-20 thriller.”

Dimitar Berbatov stole the show at White Hart Lane that day, as Tottenham came from behind to claim all 3pts in this 10-goal thriller.

The 36, 178 in attendance that night couldn't have imagined this game was going to be so high-scoring, not even by the half time interval. The pair went in level at the break with one goal apiece, Berbatov opening the scoring and Cisse equalising all inside the opening 16-minutes.

Reading took the lead in the second half through an Ingimarsson header, but Berbatov levelled the scores 10-minutes later. The visitors restored their one-goal advantage through Kitson in the 69th-minute, only for Tottenham's Bulgarian striker to complete his hat trick shortly after. However, Reading responded with another Kitson goal in the 74th-minute to go 4-3 up, but this time Spurs responded quickly through Malbranque and the sides were level again.

The hosts were awarded a penalty which was saved, only for Defoe to follow up and put the ball into the back of the net, 5-4 Spurs. Reading pushed for an equaliser but it was Tottenham that scored the decisive goal in the 83rd-minute, as Berbatov sealed the victory with his fourth goal of the game.

Welcome to the Jermain Defoe show! That's how it must have felt for the onlooking Wigan fans as Spurs hammered the Latics 9-1, five of which were scored by Defoe.

Defoe became only the third player, behind Alan Shearer and Andy Cole, to score five goals in a single Premier League game when Tottenham faced Wigan that night.

Crouch headed the hosts in front but Scharner equalised for Wigan. Defoe put Spurs in front with his first goal of the game and neither him nor his team looked back from that point on. Oneway traffic was ahead for Wigan and they simply couldn't handle what their hosts had to offer, especially Defoe who scored his first three goals in the space of 7-minutes.

It was the nadir of Arsene Wenger’s long Arsenal career. A team depleted by injuries and suspensions headed to Old Trafford and suffered humiliation.

The Gunners were 3-1 down by half time but things got much worse after the break. By the end they had conceded eight and Wayne Rooney had netted three. It was an embarrassing capitulation that only served to underline the gulf between the two teams.

You got the sense Sir Alex Ferguson almost felt pity for Arsenal as they trudged off at the final whistle.

Goals galore in this Premier League classic, as Theo Walcott helped himself to a hat trick against the Toon Army in 2012.

Walcott opened the scoring in the 20th-minute, but the teams went in level at the break following an equaliser from Ba. Oxlade-Chamberlain put the Gunners back in front early in the second half, but Marveaux scored to make it 2-2 just before the hour mark.

Podolski restored Arsenal's lead but 5-minutes later Ba netted to make it 3-3. Walcott scored his second of the game to make it 4-3 and Giroud but the game beyond doubt with two goals in the last 10-minutes. Walcott completed his hat trick in stoppage time and the home supporters went wild.

How else could Ferguson have gone out? His final game in charge of Manchester United was typically thrilling, and a fitting conclusion to his managerial career.

United twice raced into three-goal leads: they were 3-0 up by the half-hour mark and later led 5-2. But West Brom, inspired by Romelu Lukaku, fought back to level late on.

United had already secured the title, but there was still a hint of frustration. Even on a day of celebration, Ferguson’s competitive streak remained.

Fresh off the back of their Invincibles season, Arsenal were aiming to retain the Premier League title. But their defence did not prove as resilient as the previous year.

That meant for some highly entertaining games. The most memorable was the North London derby at White Hart Lane, a clash which ebbed and flowed until Arsenal eventually edged to victory.

The Gunners led Spurs throughout the second half after Thierry Henry had levelled on the stroke of half time. Tottenham repeatedly pegged them back, but Robert Pires late goal was enough to secure the three points.

Not even Sir Alex Ferguson could blame his team's kit for this result, as Southampton recorded one of the most famous Premier League upsets back in 1996.

The Saints were helped by the dismissal of Roy Keane but still would have won the game if the Irishman had stayed on the pitch for the entire 90-minutes. Surprisingly Matt Le Tissier only scored one goal in this romp, but what a goal it was, chipping Peter Schmeichel from outside the box and then celebrating in such a cool and calm manner.

Ostenstad and Berkovic both helped themselves to braces for the Saints and the unfortunate Gary Neville put through his own goal in the final minute to add insult to injury.

Back when Jürgen Klopp’s Liverpool still conceded goals, in the early days of the German’s tenure, they were involved in one of the Premier League’s most memorable games.

Defending appeared an alien concept for both teams, and it appeared Liverpool would leave Carrow Road with a 4-3 win having at one point trailed 3-1. But in injury time, Norwich defender Sébastien Bassong headed home to send the home fans in raptures. That was dramatic enough.

Moments later, Adam Lallana’s volley rolled agonisingly into the far corner. It was effectively the last kick of the game. Liverpool’s players ran to the sideline and celebrated wildly with Klopp, who lost his glasses in the mayhem. 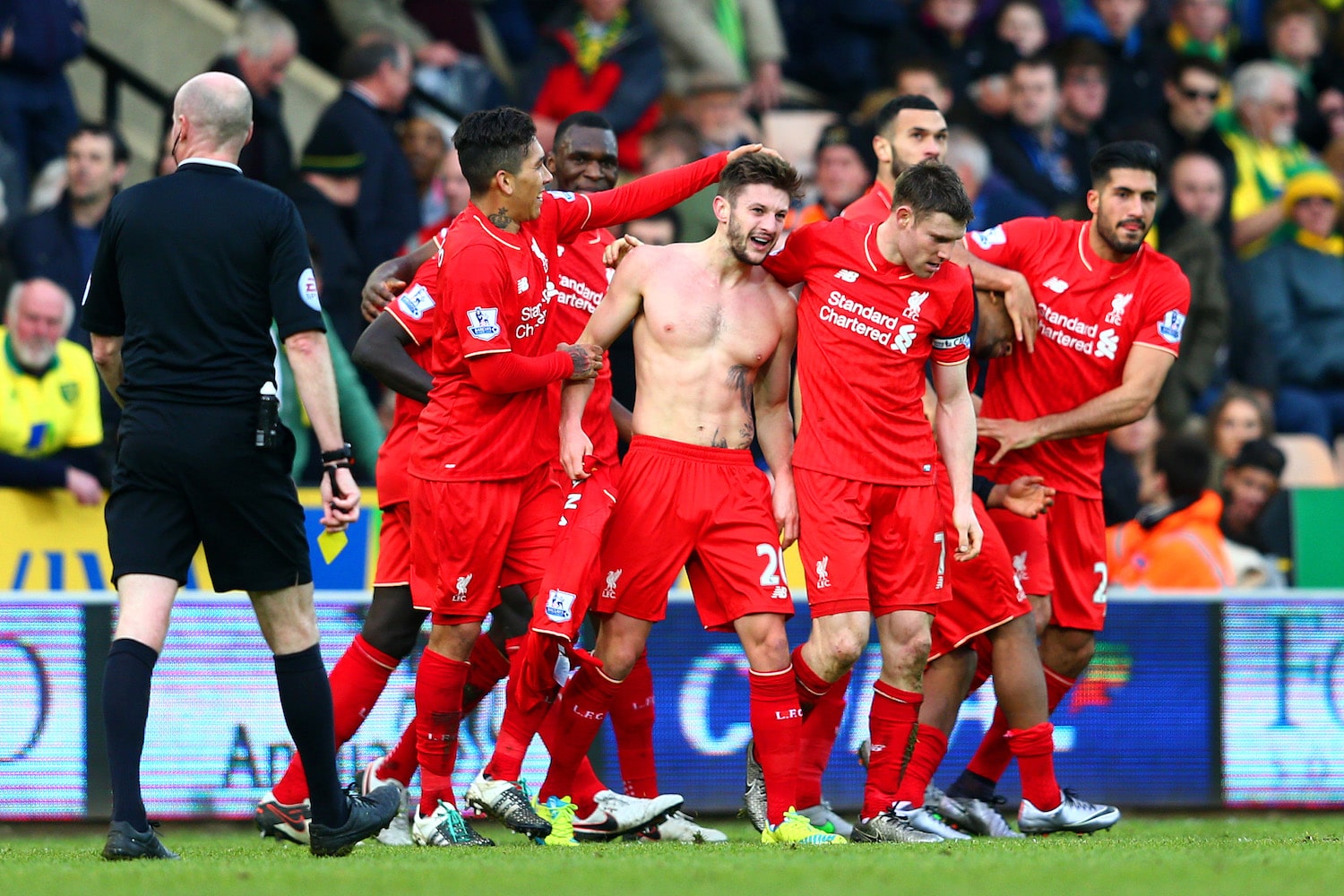 No, we haven't got the scoreline the wrong way round this was when Man City just started splashing the cash that turned them into a Premier League powerhouse.

Boro dominated this game from start to finish, opening the scoring in the 16th-minute via a Downing penalty. Downing would score again in the second half, as would Johnson, Rochemback and Aliadiere, but the striker who came to the club with a big reputation and never really lived up to the hype, Alves, delivered on this day, scoring a hat trick.

To be fair to City, they had centre-back Richard Dunne sent-off in the opening 15-minutes. The Irishman gave away a penalty in the process and set the tone of the afternoon for the travelling Citizens.

This was about as chaotic as Premier League games get. There were seven second-half goals scored at the Liberty Stadium when Swansea and Crystal Palace met. Four of them came across 11 minutes.

Palace, having trailed 3-1, turned things around to lead 4-3 heading into injury time. But two late Fernando Llorente goals won the game Swansea and left Alan Pardew and his players dejected.

“The last 20 minutes was as crazy as I have ever seen,” said Palace’s boss.

The Toffees and Lukaku started this game with real purpose and the big Belgian striker never gave the Bournemouth defence a minutes peace. Everton went 1-0 up in the opening minute thanks to a great solo run and finish from Lukaku and were 3-0 up at the break, McCarthy netting a bizarre second goal and Lukaku scoring his brace.

Bournemouth mounted a comeback that had the Goodison faithful worried for a while, but Lukaku netted his hat trick and a minute later added his fourth goal of the game before Barkley latched onto a through-ball, rounded the goalkeeper and celebrated before putting the ball into the back of the net, cheeky!

Perhaps the comeback to better all Premier League comebacks. Newcastle were 4-0 down at half time – within 26 minutes in fact – and looked almost certain to be on the end of a thrashing.

But two Joey Barton penalties and a Leon Best goal put them back in contention with just under ten minutes remaining. Then came Cheik Tiote’s thunderous strike from 20 yards out to level the scores.

Cue wild celebrations in the stands at St James’ Park.

Bradford had raced into a 4-2 second-half lead at the Boleyn Ground and looked on the verge of a crucial win.

Goals from Dean Windass, Peter Beagrie and Jamie Lawrence had put them in control. But they could not hold out. West Ham fought back and a young Frank Lampard scored the winner with seven minutes remaining.

“That game is what it's all about for supporters,” said the Hammers manager Harry Redknapp. “They come to be entertained and they certainly got their money's worth today. It was magnificent.”

This result will be hard to top in what remains of the 2020/21 campaign, as underdogs Aston Villa smashed the reigning Premier League champions 7-2.

Olly Watkins scored a perfect hat trick all in the space of the opening 45-minutes. Yes, Villa got some luck with a few deflected goals, but the hosts thoroughly deserved their win. This result didn't derail the Liverpool express though, as Klopp's men would go on to thrash Crystal Palace 7-0 away later in the season.

Former Everton midfielder, Ross Barkley, made his Villa debut on loan from Chelsea in this game and scored against the old enemy.

Liverpool and Arsenal are used to scoring goals against each other. Only recently the two have been involved in a 3-3 and a 4-3.

In 2009, though, they played out one of their most memorable encounters. Andre Arshavin, at his most prolific, scored four, including what looked like the winner in the 90th minute.

But he did not account for Yossi Benayoun, who popped up with seconds remaining to convert after the ball dropped kindly in the box.