The former PSG, France, and Liverpool manager, Gerard Houllier passed away in December of last year, but the 73-year-old certainly left his mark on the annals of football history.

In 1986, Houllier lead PSG to their first-ever top division title and then in 1992, his was announced as the manager of the French national team. However, things didn't go to plan for Houllier as his France side failed to qualify for the 1994 World Cup and he resigned from the position in 1993. Houllier blamed David Ginola for France's shock failure to qualify for the World Cup, due to the winger failing to keep hold of the ball late in the game against Bulgaria which lead to Kostadinov scoring a dramatic winning goal.

Houllier stayed within the setup of the French national side though, taking charge of the U18s and U20s between 1994-1997. Then, in 1998, Liverpool came calling for the experienced French Manager. Initially, Houllier was brought in to manager Liverpool alongside Roy Evans, though everybody knew that the Frenchman had been brought in to replace the Liverpool icon and later that year he took sole charge of the Merseysiders.

Houllier's 6-year spell in charge of the red half of Merseyside proved successful overall, but once he had taken the club as far as he could he was replaced by Rafa Benitez. Houllier took control of 307 matches at Liverpool and left the club with a win rate of 51.5%, not to mention some silverware. Along with the League Cup in 2002/03, Houllier delivered six trophies during his time at Liverpool, three of which arrived in the same season. 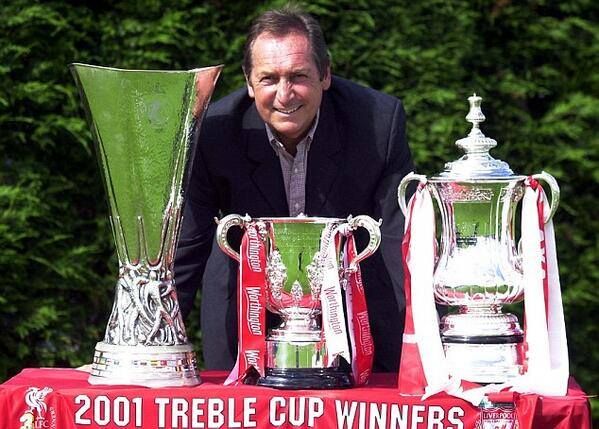 During the 2000/01 campaign, Houllier guided Liverpool to one of their most famous seasons in the club's modern-day history. That season Liverpool won the FA Cup, League Cup and the UEFA Cup, as well as finishing 3rd in the Premier League table.

It is this treble-winning season that Houllier will be most remembered, not just by Liverpool fans, but fans of football in general. Whether you loved them or loathed them, those of us of a certain age remember that trophy-laden season all too well, and you have to admire the manager and his players for what they achieved during that period.

On the 25th February 2001, Liverpool secured the first of their three trophies during the 2000/01 campaign, beating Birmingham City on penalties in the final. Birmingham were a Championship side at the time and Liverpool were the huge favourites to claim the title, so it was something of a surprise to see the pair level after 90-minutes.

Liverpool lined-up with Westerveld in goal, Babbel and Carragher at full-back and Hyypia and Henchoz at centre-back. In the midfield four, they played Smicer, Gerrard, Hamann and Biscan and up-front Fowler and Heskey lead the line.

Fowler, who top-scored in the competition that season with 6-goals, put Liverpool in front on the half-hour mark, but a 90th-minute penalty from Darren Purse saw Birmingham force the final into extra-time. With no more goals scored during the next 30-minutes, the game went to penalties and from this point, either team could have won.

McAllister, Barmby, Ziege, Fowler and Carragher all scored their penalties for Liverpool, but Hamann missed, while Purse, Marcelo, Lazaridis and Hughes converted for Birmingham, but both Grainger and Johnson missed. Liverpool did just enough to win in front of 73,500 fans at the Millennium Stadium, but next up was the FA Cup final against Arsene Wenger's Arsenal.

After negotiating their way past Rotherham United, Leeds United, Manchester City, Tottenham Hotspur and then Wycombe Wanders in the Semi-Final, Liverpool made it through to their second final of the campaign.

Liverpool lined-up in their familiar 4-4-2 formation and made just two changes to the side that beat Birmingham on penalties in the League Cup final Murphy came into midfielder ahead of Biscan and Owen replaced Fowler up-front.

Arsenal had more shots during the 90-minutes but Liverpool edged the possession stats. After a goalless first-half, Ljungberg opened the scoring with what many thought would turn out to be the winning goal for the Gunners in what was a tight and tense final. However, Owen scored two dramatic late goals in the final seven minutes to wrap up a 2-1 win and Liverpool's second cup success of the campaign.

Liverpool saved their most dramatic cup final win for last, defeating Spanish side Alaves 5-4 in extra-time at the Westfalenstadion in Dortmund.

The Reds earned their spot in the final after knocking-out the likes of Rapid Bucuresti, Slovan Liberec, Olympiacos, Roma, Porto and then Barcelona. Once again Liverpool lined-up in their familiar 4-4-2, but this time Steven Gerrard was deployed on the right-hand side of midfield and McAllister came in to replace Smicer in the starting eleven.

Babbel put the favourites in front after just 3-minutes and Gerrard added a second goal in the 16th-minute. Alonso pulled a goal back for Alaves before the break but McAllister restored Liverpool's two-goal advantage in the 40th-minute. Two early second-half goals from Moreno pulled Alaves level, but Fowler put Liverpool 4-3 up in the 72nd-minute. Cruyff netted for Alaves to send the game into extra-time but during this period Alaves had two-men sent-off and an own-goal from Geli just 4-minutes before a possible penalty-shoot out was upon us, handed Liverpool their third cup win of the season.

The End of an Era

Liverpool certainly didn't do things the easy way under Houllier but they always provided excitement and drama for their fans and all of the neutrals that tuned in across the globe. The following season Liverpool claimed the Charity Shield and the UEFA Super Cup under Houllier, as well as finishing as runners-up to Arsenal in the Premier League. During the 2002/03 campaign, Houllier claimed his last trophy with the club, beating bitter rivals Manchester United 2-0 in the League Cup thanks to goals from Gerrard and Owen.

The success didn't end there for Houllier, whose next move to Lyon produced two Ligue 1 titles and two Trophee des Champions in the space of two short years. In 2010, Houllier returned to the Premier League with Aston Villa but football seemed to have moved on at this point and the Frenchman left in June 2011 with a win ratio of 35.9%. Houllier, who had suffered from heart conditions earlier in his career, died at the age of 73 in Paris after an operation on his heart.

Former Liverpool captain, Steven Gerrard said that ‘”(Houllier)… was more than just a manager (that he shaped him into)… a better player, a better person, a better leader”.