The Best Predictions and Odds for Genoa vs Salernitana

We're backing Genoa to win this weekend just as they did when the two sides locked horns at this very stadium in December for a Coppa Italia tie. One goal proved enough to win that day and could well do the job on Sunday as well. Genoa have kept back-to-back clean sheets since shipping 6-goals away at Fiorentina but have had their own troubles putting the ball into the back of the net. Salernitana have lost three of their last five league games and have by far the worst goal difference in Serie A this season.

In terms of a final scoreline, we're backing Genoa to win 1-0. The hosts have kept clean sheets in their last two games against Udinese and Roma but haven't scored more than one goal in any of their last six outings. Salernitana have a very poor defensive record and we expect their attackers to struggle against Genoa's defence this weekend.

The Basement battle heats up as Genoa host Salernitana

Genoa made the trip to Roma last time out and did really well to come away with a share of the spoils. The first half ended goalless and Genoa defended well but looked like they would lose the game when substitute Østigård was shown a straight red card in the 68th-minute. However, Genoa held firm and both teams ended the game with 10-men on the pitch following Zaniolo's sending-off in stoppage-time.

Salernitana took the lead twice at home to Spezia but defensive errors cost the home side a rare win. Verdi opened the scoring after just 3-minutes but a penalty allowed Spezia to equalise in the 12th-minute. Salernitana moved back in front just 4-minutes after being pegged back, Verdi on hand to net his second of the game. However, in what was a mad opening 30-minutes, Spezia were awarded another penalty and this time Verde converted it and that was how the scoreline remained.

Genoa: Leo Østigard is suspended for the home side while teammates Mattia Bani and Domenico Criscito could miss the game through injury.

Salernitana: Frederic Veseli is suspended for the visitors and the likes of Andrea Schiavone, Mamadou Coulibaly and Stefan Strandberg look set to miss out due to injury. 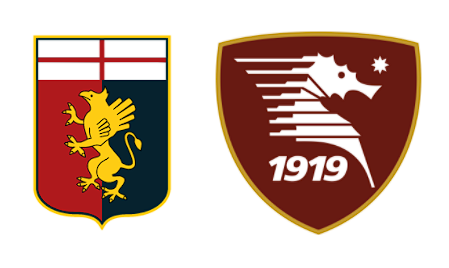