Manuel Francisco dos Santos was many things. He was an alcoholic. A womaniser. He couldn’t read or write and was born with such physical disabilities it was feared he’d never walk, yet he went on to become a national hero and one of the greatest footballers the world has ever seen.

Like many Brazilian children Garrincha, or “the little bird,” had the odds stacked against him from birth, but this young man from Pau Grande had it worse than most. When he was born his spine was deformed and his right leg bent outwards while his left leg was six centimetres shorter than the other and curved inwards. Doctors initially thought he would never walk properly, let alone play football.

As a young man he had no interest in becoming a footballer despite impressing his fellow workers with his skills at the local factory he began working at when he was 14. only when he reached the age of 19 was he was persuaded to train with Botafogo. Within 15 minutes Garrincha calmly slipped the ball between Brazil international Nilton Santos’s legs who immediately persuaded the club to give him a professional deal.

By the time he signed for Botafogo Garrincha was years behind in social development than his peers, while also being totally sheltered and largely ignorant of the ‘real world'. He was a boy in a man's body but a boy with an immense talent with a football.

He would end up playing over 600 games for the club and scoring close to 250 goals and within nine years of his professional debut Garrincha had become a double World Cup winner and one of only three players ever to win the Golden Ball and Golden Boot at a World Cup.

Like all geniuses Garrincha had a simple view of the game that made it an enjoyable pursuit rather than a sport or a job. Like a child in the playground he played because he loved football and wanted to entertain others rather than to win while not allowing his physical problems to restrict him. Garrincha instead used them to his advantage utilizing the bend of his legs to trick defenders.

His first appearance for Brazil came in the 1958 World Cup and in the very same game that a certain 17-year-old called Pele announced himself on the global stage. When Brazil faced the Soviet Union in their final group game on June 15th the Soviets were assumed to be fierce opponents for the Brazilians, a team and a nation still haunted by the memories of their humiliating defeat to the Uruguayans in front of 200,000 people at the Maracana eight years previously. 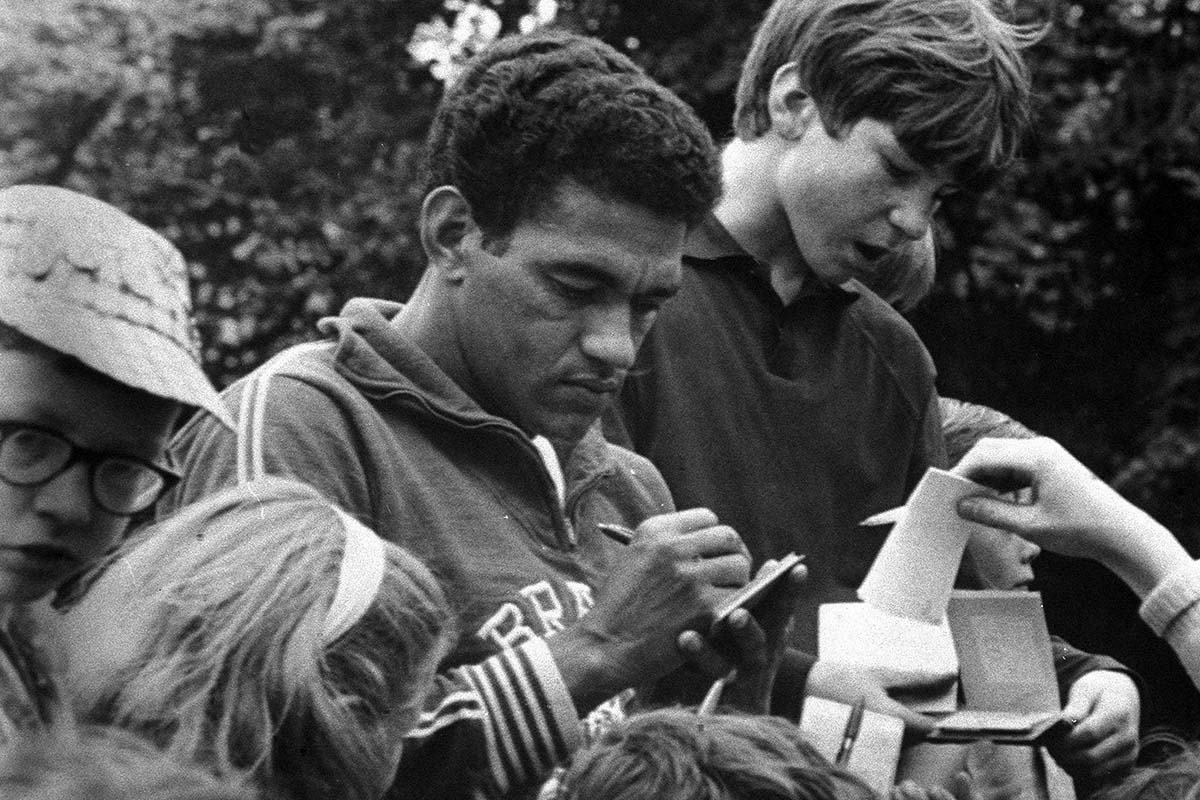 Brazil coach Vicente Feola made two bold decisions before kick-off giving a place up front to a then unknown Pele and a starting spot on the right wing for Garrincha. Many members of both the Brazil camp and media deemed this a foolish decision as Pele was claimed to be “too infantile and lacking in the necessary fighting spirit” to take on the disciplined and defensive Soviet side.

Pele may have been considered too youthful to be thrown into the deep end against the Soviets; but Garrincha was, somewhat incredibly, deemed too stupid to be an international footballer. Psychologists had thought of Garrincha, whose IQ scores were rumoured to be in low 70s, as a man not capable of grasping the gravitas of the situation.

In the first 30 seconds of the game Garrincha had beaten Kuznetsov three times and hit the post. A minute later Pele hit the bar. Thirty seconds after that Didi played through Vava and Brazil eventually found the net. It was some of the most gripping and exciting three minutes of football ever played and Brazil would win the game 2-0; going on not just to win the World Cup but to create a whole new chapter in their nation’s history.

After the game, Garrincha was baffled by why the Soviets were so distraught and was completely unaware of the format of the tournament, assuming that there was still a second leg to play.

Following that 1958 World Cup victory Pele became football's first true superstar, representing the unparalleled glory of Brazilian football; but it was Garrincha who would represent the artistry and ultimately the tragedy of Brazilian life. He played the game like everyone wanted it to be played but nobody had yet dared. To a man who had grown up amidst such adversity a big International game wasn’t pressure, it was just a form of escape from a miserable existence. 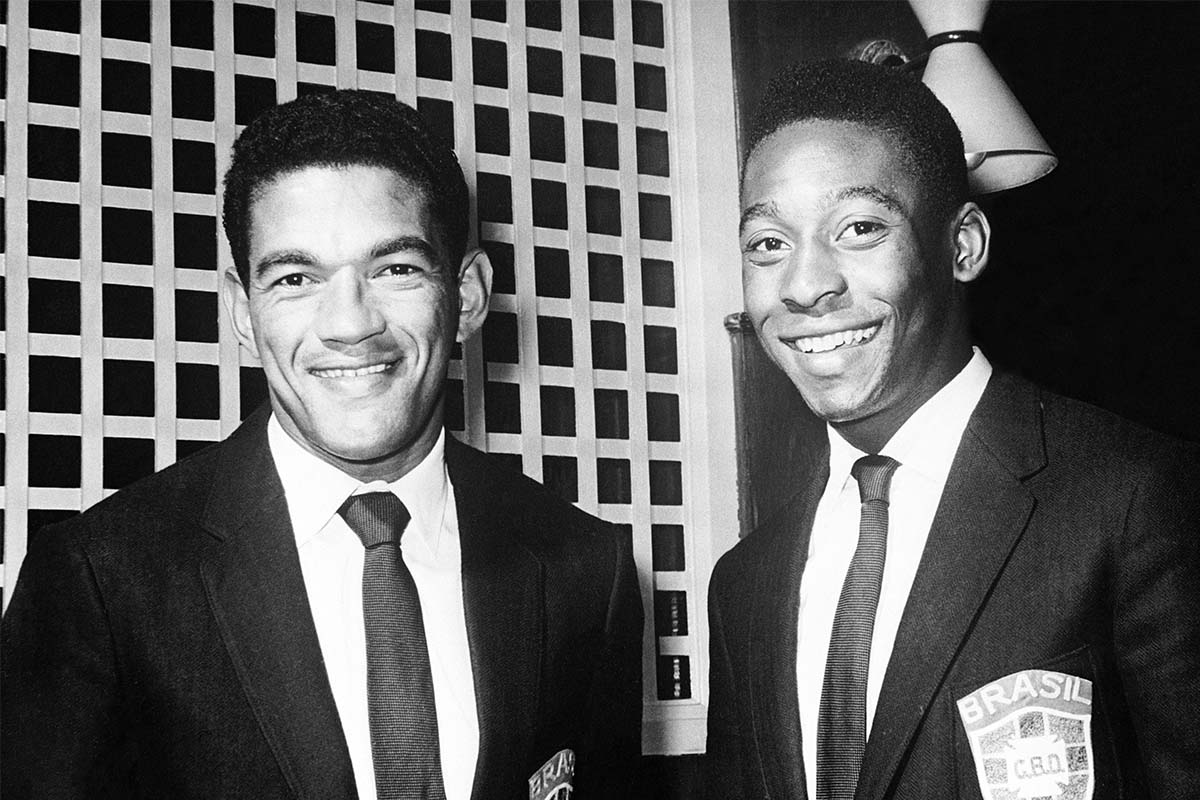 Off the pitch the two couldn’t have been more different. While Pele lived for the future as a model professional, Garrincha, perhaps more than any other footballer ever, lived in the moment. He ate and drank until he would pass out, and when he wasn't drinking, he was chasing women – he was a complete addict.

Brazil would defend their World Cup title four years later in Chile and two World Cup wins meant that Garrincha had very little left to prove.  His status among football gods had been engraved forever and he was known as the best dribbler, not only of his time, but of all time.  In 1966 Brazil lost the first and only international game with Garrincha in the line-up after five years as an international after defeat to Hungary, it was to be the Brazilian superstar’s last international competition.

Alcoholism and a carefree personal life had caught up with him. He had married a girl named Nair Marques when he was just 19 and with her he had eight daughters, however, a notorious womaniser, throughout his marriage to Marques he engaged in countless affairs and is thought to have fathered 14 children in his lifetime.

At the age of 33 he could no longer sustain the lifestyle as both a professional footballer and a chronic alcoholic. His knees had begun to give way, and his refusal to see a reputable doctor, instead of being treating by healers in his home town of Pau Grande, not only spoke volumes about his sheltered upbringing but also ended any hopes of making a recovery. 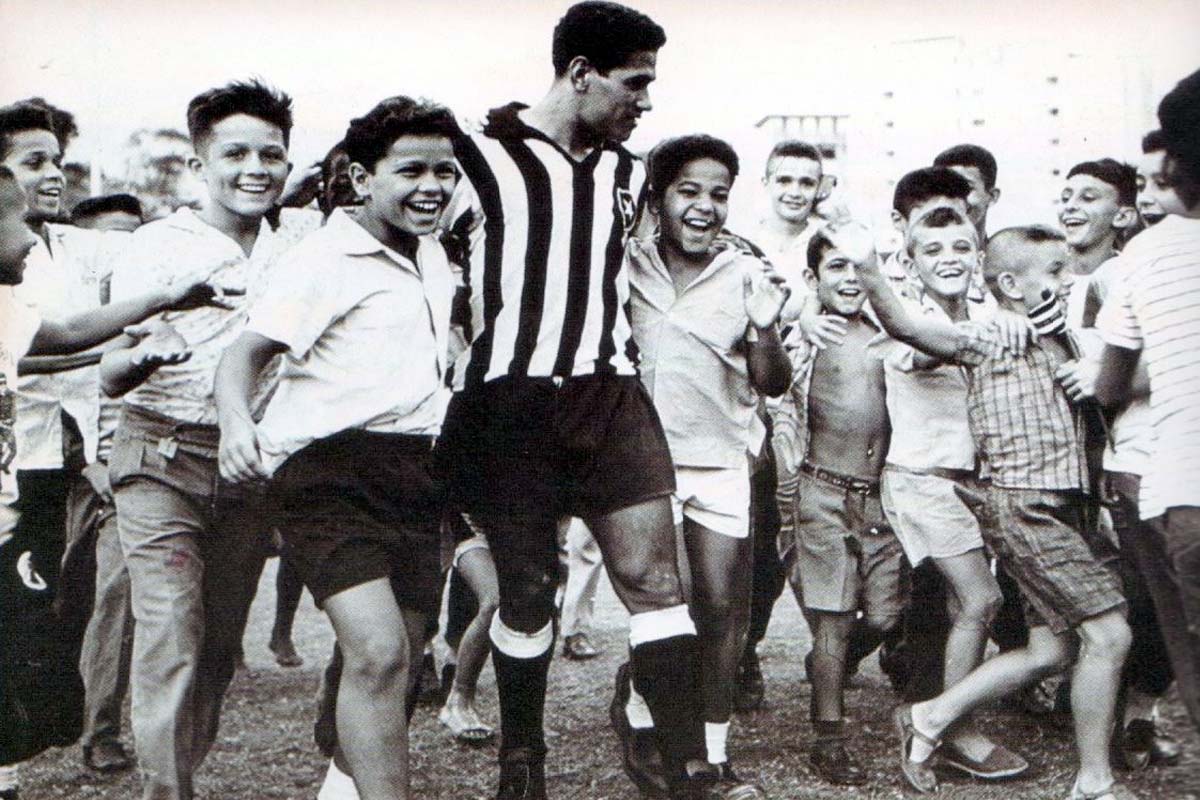 However, once the spotlight was off of Garrincha’s sporting career, the media turned their focus onto his personal life.  He was portrayed as a charismatic champion, a unique talent and a social icon, but also as an uncouth idiot who had become a professional player purely by chance, whose actions were like that of a peasant.

Garrincha’s on-field majesty was widely seen as something of a distraction from a life of addiction and only on the field was he safe from his personal demons. Football was his salvation, but a salvation that could only ever last 90 minutes. Once his playing days with Betmgm bonus were over he faced a constant battle without the outlet of football to keep him from the many temptations that were constantly placed before him.

In all honesty football had only ever been a brief excursion from a desperate upbringing from which he had no real chance to escape. His father was alcohol dependent and he also began drinking from a young age. A damaging addiction to alcohol and sex was already in place long before his Brazil debut and it would go on to form the backdrop to the majority of his life rather than the great things he achieved on the pitch.

Without the focus of professional football things went from bad to worse for Garrincha. While driving his car drunk he crashed into a lorry in 1969, killing his mother-in-law in the process and on a different occasion ran his father over but and failed to stop. Both incidents only seemed to increase his levels of drinking though. In 1977 he separated from his second wife after accusations of domestic violence at the age of just 49 he was dead having fallen into an alcoholic coma from which he never recovered.

Having been something of a recluse since his playing days ended Garrincha had become totally anonymous to the public for the last five years of his life; even so his death led the nation into a deep state of mourning and forgiveness and his funeral was so enormous it was held at the 100,000 capacity Maracaná Stadium. People came from across Brazil to get a glimpse of his coffin, which in one last act of defiance, wouldn't fit in the grave that had been dug for it.

The story of Mane Garrincha is in equal parts as beautiful as it is tragic. Despite his demons he was a footballing artist. He was one of the sporting world's true entertainers – the Charlie Chaplin of football. Many claim he was better than Pele and while this may or may not be the case, everyone who saw Garrincha play has described him as the most uniquely joyful footballer ever.

Despite offers of burial plots amidst middle-class suburbs and national mausoleums his body still lies in an isolated, tired-looking cemetery on the outskirts of Rio. Garrincha was born into Brazil’s poor and impoverished community and perhaps it’s fitting that’s where he should rest – a true working class hero to the end.