Fulham are already confirmed as Champions but Sheffield United could still miss out on a top six spot. Can they beat the table toppers to ensure they enter the playoffs? Find out with our Sheffield United vs Fulham match preview with free tips, predictions and odds mentioned along the way.

If this game was a couple of weeks back, we'd have had Fulham down as winners but you cannot ignore the emotional investment in football and Fulham have just had their crowning moment; that's bound to see them subconsciously stop a few percent and, against a Sheffield United side that have lost just once in their last 10 home games, we think that is enough for the Blades to grab a win. Fulham haven't been perfect on the road either having lost two of their last five and drawing another.

Both Sheffield United and Fulham have form that suggest this won't be an end-to-end goalfest. Sheffield United have seen four of their last five home games end with at least one side failing to score whilst Fulham have seen both teams score in just two of their last five away games. The last two meetings between these sides have ended with a clean sheet too; each team has recorded a 1-0 victory. It could easily play out in similar fashion here.

Sheffield United vs Fulham: Let's look at the predicted lineups

Fulham are a Premier League team and Sheffield United are hoping to join them via the playoffs. This really should be a good spectacle.

Sheffield United are in pole position to lockdown a playoff spot heading into the final day race but it is not done just yet. Thankfully for them, Fulham have nothing to play for. That should help the Blades' bid for the top six.

Fulham are the Champions, Aleksander Mitrovic is a record breaker and they'll go into the Premier League feeling good about their chances of staying there. For them, this game doesn't matter but they'll still want to sign off in style for their away fans. Is it possible they keep up the momentum in quite the same way though?

A quickfire FAQ on Sheffield United vs Fulham 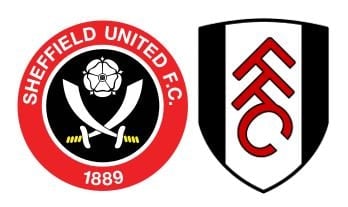