Football is a fast-moving world. It doesn't seem that long ago the world watched with amazement as an 18-year-old Kylian Mbappé broke through at Monaco, tearing defences to shreds with his pace, skill and finishing.

A lot has happened since Mbappé exploded onto the scene. He led Monaco to Ligue 1 success, earning a mega-money move to Paris Saint-Germain, where he's duly picked up another couple of French titles and established himself as one of the world's deadliest attackers.

Oh yeah, and he also won a World Cup.

Mbappé will turn 21 this year, meaning he's practically ancient. With that, we're on the hunt for France's next superstar.

Let's look at some Les Bleus' most exciting prospects.

Still only 19, Kamara has already cemented his place in the Marseille defence.

The young centre-back started 27 Ligue 1 games for Les Phocéens during the 2018/19 season with his displays earning him a Ligue 1 Young Player of the Year nomination (he lost to Mbappé).

Dominant in the air, he's won 64 aerial duels in the French top flight throughout the current campaign, ranking him fifth. A progressive passer, Kamara has the technical attributes that have become an essential pre-requisite for emerging defenders.

He's also been linked with a move to Chelsea. Remember the name. 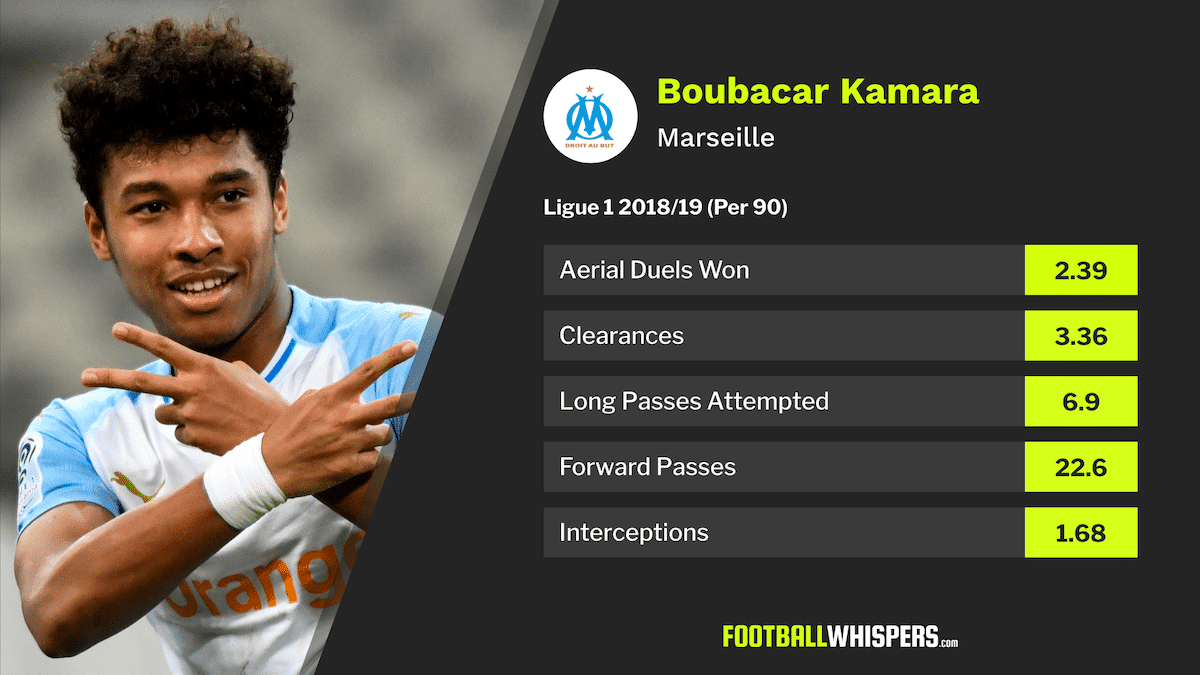 The highly rated 18-year-old has become a regular in the Saint-Étienne team recently, his 6ft 4in frame making him a commanding presence at the heart of Les Verts' defence.

Heavily linked with a move to Arsenal, Saliba has shown great maturity and is an intelligent distributor from the back.

Positionally astute and quick across the ground, he's been dribbled past on average 0.5 times per game this season.

Manchester United have also been credited with an interest. Whoever seals his signature is getting one hell of a player.

A tenacious midfielder, Enzo Loiodice is another to have emerged in Ligue 1 this term.

The 18-year-old Dijon starlet is adept at winning possession high up the pitch and, although his side will be playing their football in Ligue 2 next season, one suspects there will be significant interest in his services.

Having managed 851 minutes in Ligue 1 this year, Loiodice's reputation will undoubtedly grow by this time in 2020.

A graduate of Paris Saint-Germain's youth academy, Soumaré has blossomed nicely under Christophe Galtier's tutelage having been given fewer opportunities under Marcelo Bielsa.

Considered one of the most promising young midfielders in France, the rangy 20-year-old possesses a wonderful range of passing and has won possession 42 times in just 552 minutes of Ligue 1 action this season.

An energetic midfielder who does the simple things really well, keep an eye out for Soumaré in next season's Champions League.

The 19-year-old striker has been a goalscoring sensation at youth level for France, netting 36 in 38 games.

That included finishing the 2017 UEFA European Under-17 Championship as the top scorer after finding the net a record eight times in just four games.

A natural finisher, Gouiri is hoping to follow in the footsteps of Karim Benzema, and Alexandre Lacazette and shine for Les Gones.

A wonderfully creative midfielder, the 18-year-old has had to be patient since his move but will, like Gouiri, have a great opportunity to shine as part of the France panel at the U20 World Cup, which kicks off on May 23.

Previously linked with Arsenal, Adli is expected to feature prominently in France's future.

Another one of Lyon's gems, Pintor is forward gifted with two wonderful feet.

He starred alongside club teammate Gouiri at the 2017 U17 World Cup and has caught the eye during this season's UEFA Youth League, scoring five times in seven games to help Lyon reach the quarter-final.

Devastatingly quick, Pintor loves cutting in from the left flank on his favoured right foot. He hasn't managed to break into Lyon's first-team yet but a stellar showing at this summer's U20 World Cup in Poland combined with a solid pre-season should lead to more opportunities.

Like Samaré, Flips is highly thought of at Les Dogues. Predominantly right-footed, the 19-year-old is capable of playing on both wings.

Another to have starred at the 2017 U17 World Cup, he scored twice in a show-stealing performance against Honduras.

Flips hasn't broken into the first-team under Galtier but having made the bench for a cup game, he's expected to be given a chance sooner rather than later.

Despite Sochaux's precarious position in the French football pyramid – they finished 16th in Ligue 2 – Agoumé is ear-marked as one of the country's brightest midfield starlets.

The Cameroon-born 17-year-old has been a regular for the France U17 side over the last year, helping them reach the semi-final of the European Championship in Ireland earlier this month.

A wonderfully composed midfielder, it won't be long before Agoumé transcends Sochaux and makes a major impression elsewhere.

Although Enzo Millot set Twitter alight with his delightful 30-yard lob (see below), Aouchiche wasn't to be outdone, finishing the tournament as top scorer with nine goals, including four in the 6-1 rout of the Czech Republic.

Having starred in the UEFA Youth League for Les Parisiens, he's hoping to break into Thomas Tuchel's first team over the next couple of years.

That won't be easy, of course, given the depth of talent at the Parc des Princes, but if Aouchiche continues to produce as he has been, he'll be impossible to ignore.

The 18-year-old midfielder shot to prominence when he made his Champions League debut in November under then Monaco boss Thierry Henry.

The second son of France legend Lilian Thuram to have made it as a professional, the defensive midfielder could soon follow in his father's footsteps, with Juventus said to be one of several clubs interested in his signature.

31 August 1994: A 17-year-old Thierry Henry makes his AS Monaco debut alongside Lillian Thuram.

A quick-thinking, agile presence in the centre, he has represented his country at U16, U17 and U18 level. Although he isn't quite developed enough to have made the U20 World Cup squad, he's expected to become a regular on the international scene in years to come (getting anywhere near his father's record 142 caps, however, will be a big ask).