The 1986 World Cup produced some magnificent matches and the quarter-final between France and Brazil in the searing heat of Guadalajara was no exception as two greats of the game served up one of the most memorable encounters which kept a global audience of millions glued to their TVs to the very last kick.

Going into the game the South Americans were seen as favourites but only just, mainly due to the fact that their squad for that World Cup included players from one of the most gifted generations of Brazilian football that had somehow been humbled by Paolo Rossi and Italy four years previously.

Their side may have been supplemented by some good young players, such as Branco and Julio Cesar, but this was seen by many onlookers as the last chance for Brazil’s golden generation, which included greats such as Zico, Sócrates and Falcão to be crowned champions of the world.

Brazil had started the tournament well with three consecutive victories in the first round against Spain, Algeria and Northern Ireland, before going on to beat an ageing Polish side 4-0, but the true test of their strength would come against France in the quarterfinals.

The French were reigning European Champions and boasted a side which included many of those who had lifted that trophy in their own back yard just two years ago, not to mention one of the most exciting players in the world at the time; Juventus star and three-time European player of the year Michel Platini.

He presided over a midfield which was comprised of himself, the superb Alain Giresse from Bordeaux, and the defensive midfielders Jean Tigana, also from Bordeaux, and Luis Fernandez from Paris Saint-Germain, while in defence the French had one of the best in Monaco’s Manuel Amoros, as well as the veteran Nantes’ player Maxime Bossis.

Unlike their opponents France had started their campaign slowly and were seen by many as an unconvincing outfit who were failing to live up to their expectations. They had only managed a 1-0 victory against Canada thanks to a late goal by Papin, which was followed by a 1-1 draw with the USSR before they defeated a poor Hungarian side 3-0.

But as the competition got into the business end they began to improve and in the last-16 they faced the defending world champions Italy who were fancied by many to retain the trophy they had won in Spain. To the surprise of many, France dispatched their opponents 2-0 in order to set up one of the most mouth-watering clashes of the tournament so far.

Brazil were in control for most of the first 45 minutes, pressurising France thanks to their many attacking options with Careca, the most potent finisher in the side, opening the scoring just before the 20th minute following some fine work by Muller and Junior, who combined to play-in Careca to beat French ‘keeper Joel Bats.

France were now being run ragged and were almost out of the game entirely when a Muller shot hit the post. But true to the spirit of that side they soon re-grouped and were back on level terms before half time when Platini finished off a simple chance after Dominique Rocheteau's deflected cross had found him completely free at the far stick. 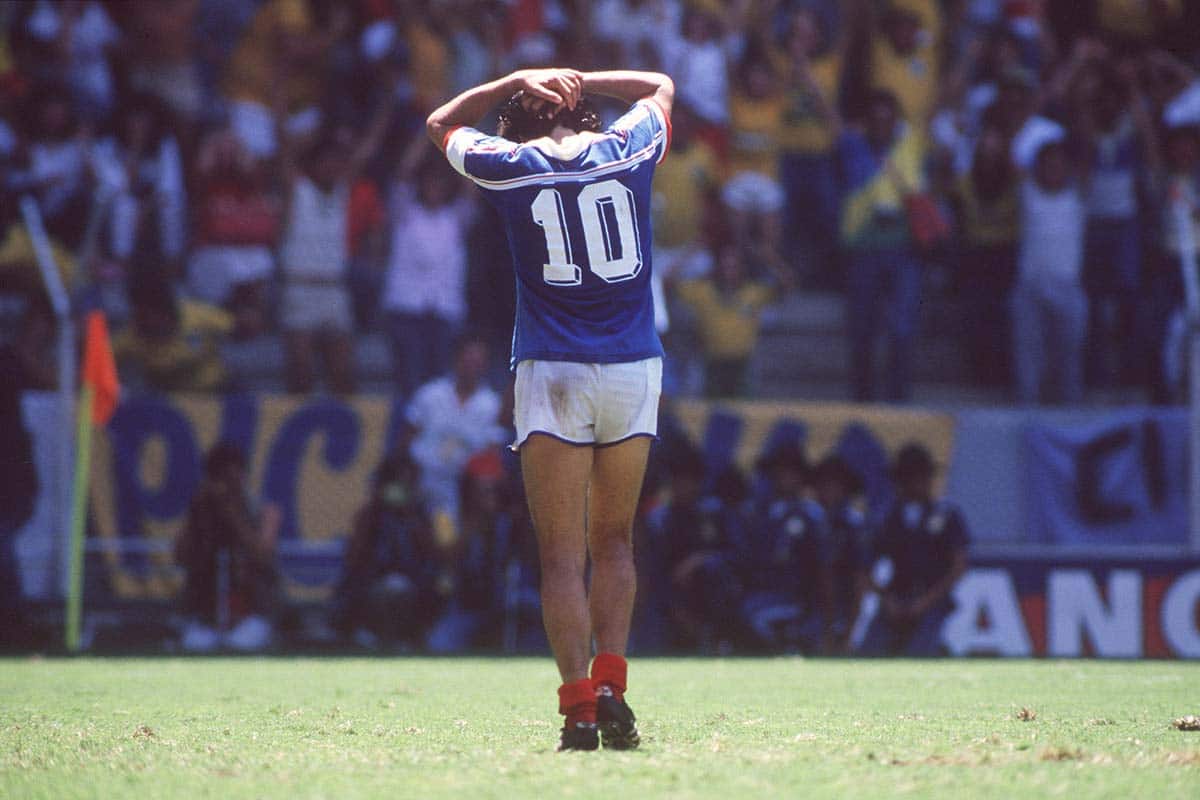 Both teams opened up more in the second half as they looked for a goal that would most likely seal the tie, and both had good chances; but it was Brazil who came closest, with Careca hitting the post on an excellent header.

As the match advanced the tighter it became as both teams realised one slip now could see them eliminated from the tournament. So with 20 minutes remaining Brazilian coach Tele Santana decided to substitute Muller for the legendary Zico, who had started the match on the bench, in an effort to break the deadlock.

Having only been on the pitch for a matter of minutes the ageing Brazilian’s impact  was almost instant when his perfectly timed through-ball saw Branco bearing down on the French goal and Paris Saint-Germain goalkeeper Joel Bats was only able to bring him down in his efforts to get the ball though replays showed that contact had been minimal.

Branco eventually picked himself up off the floor after a combination of writhing in agony and some rather premature celebrations and Zico prepared himself to take the kick with just 17 minutes remaining that would have surely meant victory for Brazil; but Bats, who had his critics throughout the tournament, made up for his actions as he dived to his left to block the spot kick.

The psychological advantage was now back with the French, who went on to dominate the remaining few minutes of the game as both sets of players tired in the hot Mexican sun, but a winning goal could not be found and the teams would have to settle for another 30 minutes of extra time. 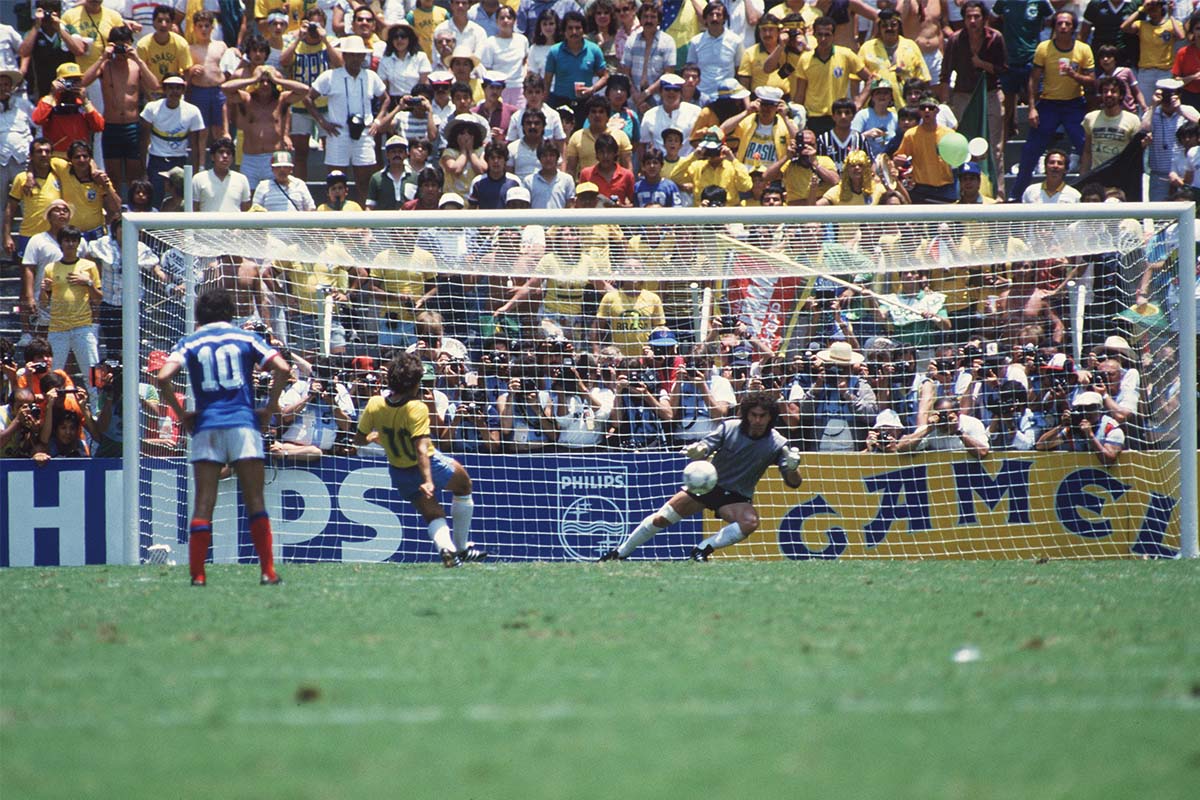 Unlike many games which go into extra-time and fizzle-out as both sets of players decide to take their chances from the penalty spot, this encounter was played-out in the same way that the previous 90 minutes had, and even witnessed one of the most controversial moments, not just in Mexico ’86, but in the history of the World Cup.

With both sides still going flat out in search of victory, the best chance fell to France striker Bruno Bellone, who had come on as a substitute for Rocheteau. Through on goal with just Brazillian keeper Carlos to beat he rounded the ageing stopper and seemed certain to put the ball into an empty net, only to be barged off the ball by the desperate keeper who knocked him clean off balance – the chance had gone.

Astonishingly the Romanian referee ignored the blatant foul and waved play-on while French players stood in disbelief, but in all the confusion it was Brazil who nearly took advantage of the situation, going close at the other end just 30 seconds later. However, that was to be the final action of this enthralling encounter and it would, indeed, be penalties that would decide who would progress to the semi-finals and who would go home.

During the 90 minutes one of Brazil’s favourite sons, Zico, had missed a crucial penalty when given the opportunity to probably win the match and now their captain, Sócrates, was to suffer the same fate when he walked up to take the first kick in the shootout when his effort was again spectacularly saved by Bats.

The next six penalties were all converted and with the score at 3-3 in the shootout the advantage was now firmly with the French as Michel Platini stepped forward to put them into a commanding lead; only for him to blaze his shot over the bar and level the shoot-out much to the relief of the Brazilians.

But Brazil failed to make the most of their opportunity and Joel Bats was again the saviour with a fine save from Julio Cesar that meant Luiz Fernandez could finish it off with the final penalty of the contest, which he did. France were through and an enthralling match had finally reached its thrilling climax.

It’s hard to mention the World Cup quarter finals of Mexico ‘86 without England’s encounter with Argentina and THAT “hand of God” incident cropping up, but when it comes to some of the greatest footballing talent on the globe pitting their wits against each other in a game that remained gripping to the end, France’s epic contest with Brazil will remain the abiding memory for anyone who had the pleasure of watching it.