Football Manager isn't just a football simulator, it's a game that takes you inside the world of football and allows you to make all the decisions surrounding your club and the players. You can control the team you love and the players you adore but it is easy to forget that these players also play the game and get to manage themselves and their friends, something that must feel slightly surreal. In this article, we're taking a look at some of the footballers who have admitted their love for the Football Manager series and may even be as addicted as you or I. We're bringing you the stories of six professional footballers and their saves on various versions of Football Manager over the years and one story that got a footballer in trouble with his partner.

Le Fondre plays for Australian side Sydney FC these days but during his time in England, he represented the likes of Reading, Cardiff, Wolves and Bolton. At the age of 34, Adam's playing days are coming to an end but the Football Manager fantastic will probably remain in the game after he hangs up his boots as a manager, even if that is only on a virtual basis. 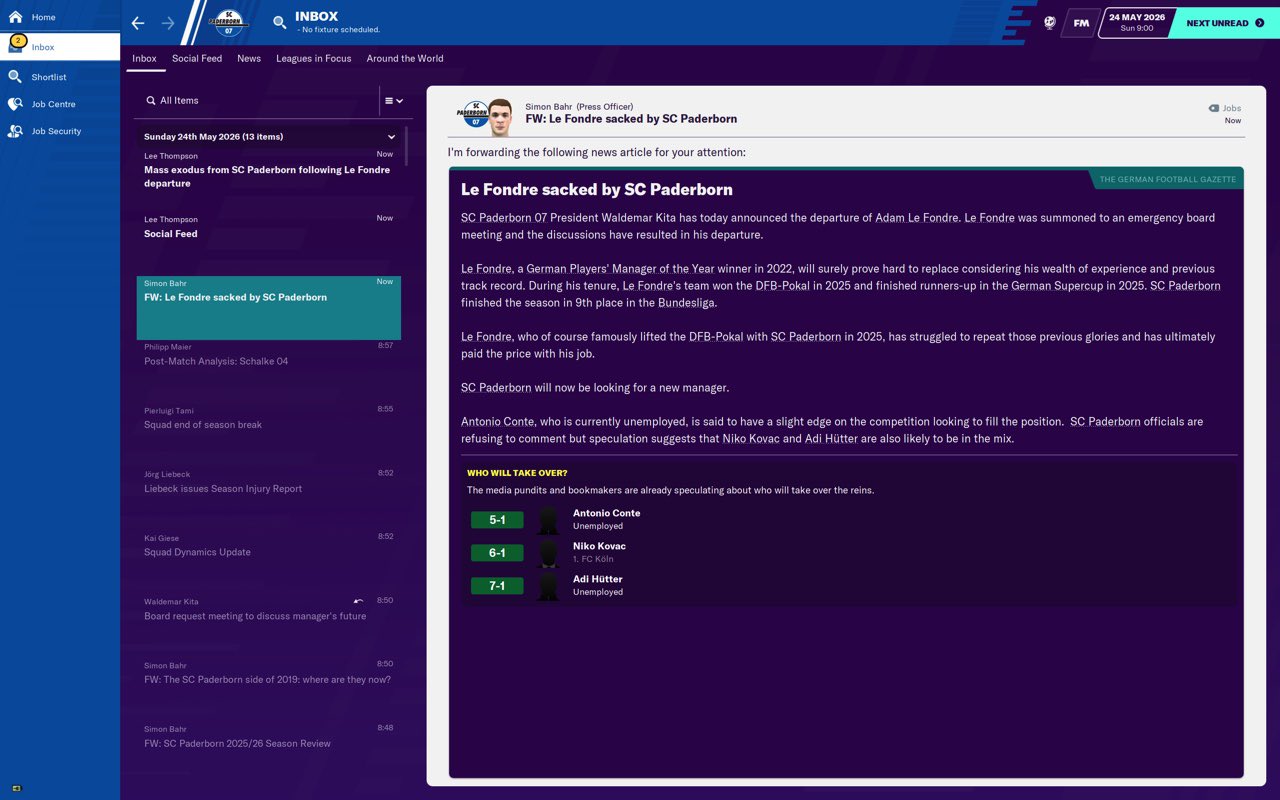 Adam shared what turned out to be the end of his journey as manager of the German side Paderborn on social media, where he was sacked in May 2026 despite leading the club to DFB Pokal glory a season earlier, Football Manager can be a cruel game. Interesting to see that Antonio Conte was the favourite to replace Le Fondre at Paderborn, perhaps prooving how much the Englishman had raised Paderborn's stature during his time in charge.

The now Barcelona star, Antoine Greizmann took to social media some time ago to share a screenshot of his 2023 Arsenal side, leading some to suggest he could be a Gunners fan. During this save, Griezmann wanted to build a young British based Arsenal side with just a couple of foreign stars, much like in the early days of the Premier League era. 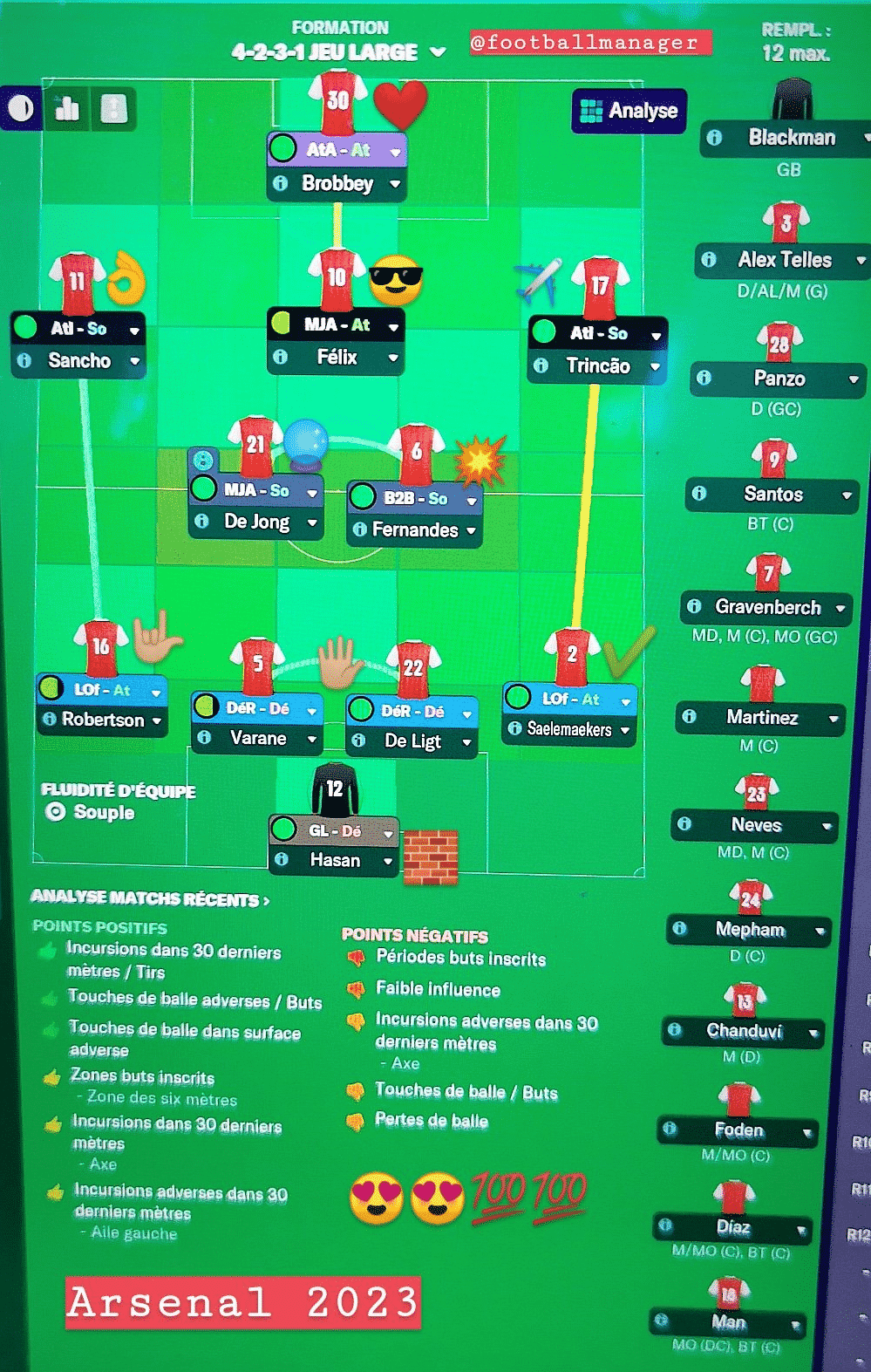 I think from his screenshot, Griezmann might have failed on his mission to make Arsenal a British based side, by 2023 at least, but you can't argue that he hasn't built a talented squad. During this save Griezmann claimed the Premier League title, League Cup and the Champions League, which all Arsenal fans right now would bite your hand off for in the real world.

The Chelsea defender hasn't released too many details about his Football Manager saves but we know that due to his love of Osasuna, they are his go-to team in the addictive simulator. Azpilicueta admitted that every time he has managed Osasuna he has never been able to sign any players from Chelsea, they simply refuse to join him. The Spanish full-back might be coy on his personal FM saves but the fact he featured in a video on the official Football Manager website, just shows how much he loves the franchise.

During his time at Wolves, Diogo Jota established himself in the Premier League and earned recognition with his international side Portugal. While many won't be surprised to learn that Jota is a keen Football Manager player, you might be surprised by one of his saves. Jota took non-league Telford United all the way to the Premier League before the year 2030, making him the most famous manager in the club's history. Telford, which is situated just down the road from Wolverhampton, have surely secured a special place in the Liverpool forwards heart as all FM players remember their greatest achievements in the series with great fondness.

The Nottingham Forest winger shared his love for Football Manager by giving an interview to the game's official website in which he talked about his greatest achievement in the world of Football Manager.

“We won the domestic league [with Shrewsbury] and were the best team in Europe every year for about eight to 10 years. I finished around 2040 playing a ridiculous formation (which I’ve never ever been able to replicate with any success) and winning roughly every game in the Joe Lolley stadium. Good times.”

To have a stadium named after you is something many Football Manager fans dream about. Personally, it has never happened for me, so seeing that Joe Lolly achieved this goal is slightly disappointing as he had to balance his game time with being a full-time footballer. Lolly has another long save on the go and seems to be a big fan of building teams up from the lower divisions.

“My current save with Oxford City is up to 2037 and I’ve gone from conference South to five top-flight titles and three European trophies, so that’s right up there,” he nonchalantly added.

Barcelona's Ousmane Dembele created his own club in FM17, Winchester FC. The Frenchman wanted to guide the newly formed club all the way to the Premier League and played the save a lot during his free time at the 2018 Wolrd Cup in Russia. Now, there is a real football club called Winchester City FC and they enjoyed a slight reputation boost when news of Dembele's FM save spread, with some of their replica kits being ordered by people in France. However, if his international teammate Antoine Griezmann is to be believed then Dembele might have cheated during his Winchester FC save, giving the club a £40m boost when they were in League One, naughty, naughty.

Andros Townsend ended up in hot water when a post by a Football Manager player showing Townsend being fined for being late to training was misunderstood by the footballer's partner. Townsend shared a text message conversation between himself and his girlfriend in which she asks him “when did you get fined for not showing up to training?”. She then sent a screenshot of the post she saw on social media and clearly, you could see by the font and style of the image that it had come from the Football Manager game. Needless to say, Townsend explained the situation and reassured his partner that he was not in trouble with his club, but it just goes to show how close to the real thing Football Manager has become. 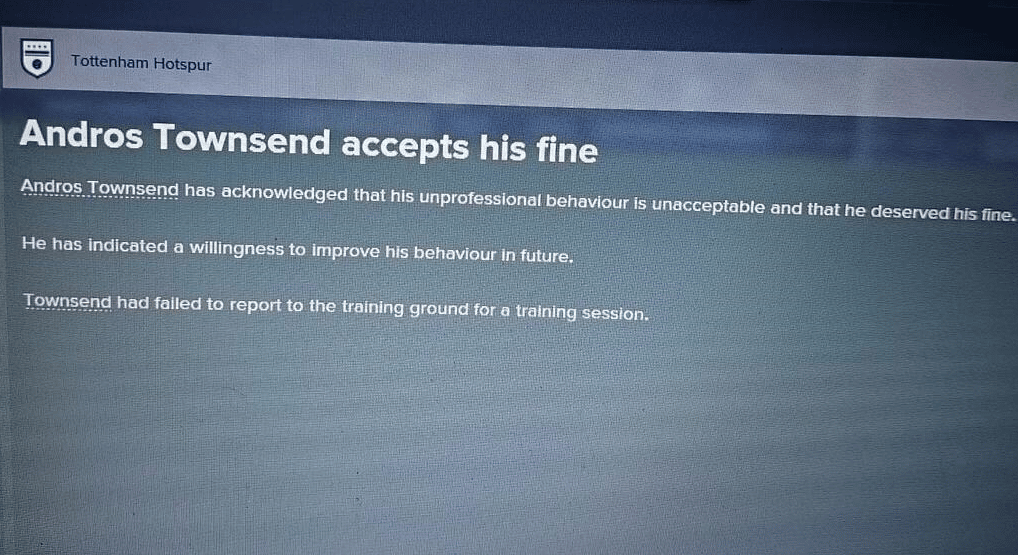