Football Manager 2022 is here and that means that football fanatics across the globe are now getting stuck into the latest instalment of the world's best football management simulator.

We have loaded up a large database with each of the top five European leagues, the Premier League, Ligue 1, Bundesliga, Serie A, and La Liga. Other, possibly better, players will be available if you load up a bigger database.

In terms of a formation, we're going with a 4-2-3-1 with two central midfielders, a creative attacking midfielder with two advanced wingers on either side of him, and a loan striker. The goalkeeper will be protected by a flat back-four containing full-backs that will push on and provide extra width.

As you will find, most of the players are ‘golden-oldies' but they still have the stats to do the business at different levels or would make excellent back-ups for those managing on a tight budget. 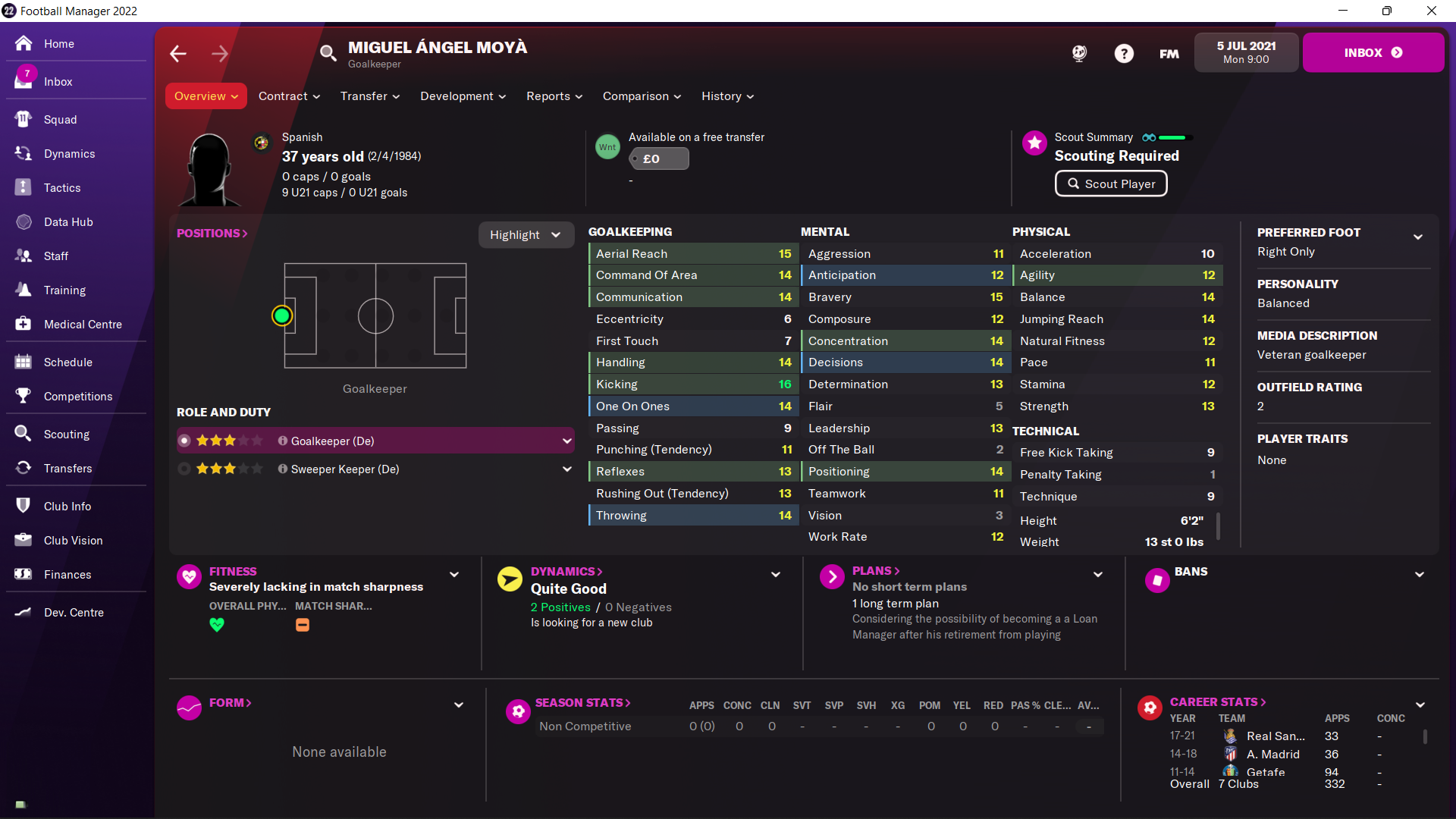 Moya made his name at Mallorca in the mid to late 2000s before making a move to Valencia in 2009. After a disappointing 3-years at Los murciélagos Moya moved to Getafe after a successful loan spell. The goalkeeper had a really good run of form and ended up signing for Atletico Madrid in the summer of 2014 where he played 36 times in the league before moving to Real Sociedad in 2018. Moya has never represented Spain at senior level but did play in all age groups from U16 to U21 between 2000-2006. As you can see, even at the age of 37 Moya would still command a starting role at some clubs and would make an excellent No.2 at others. 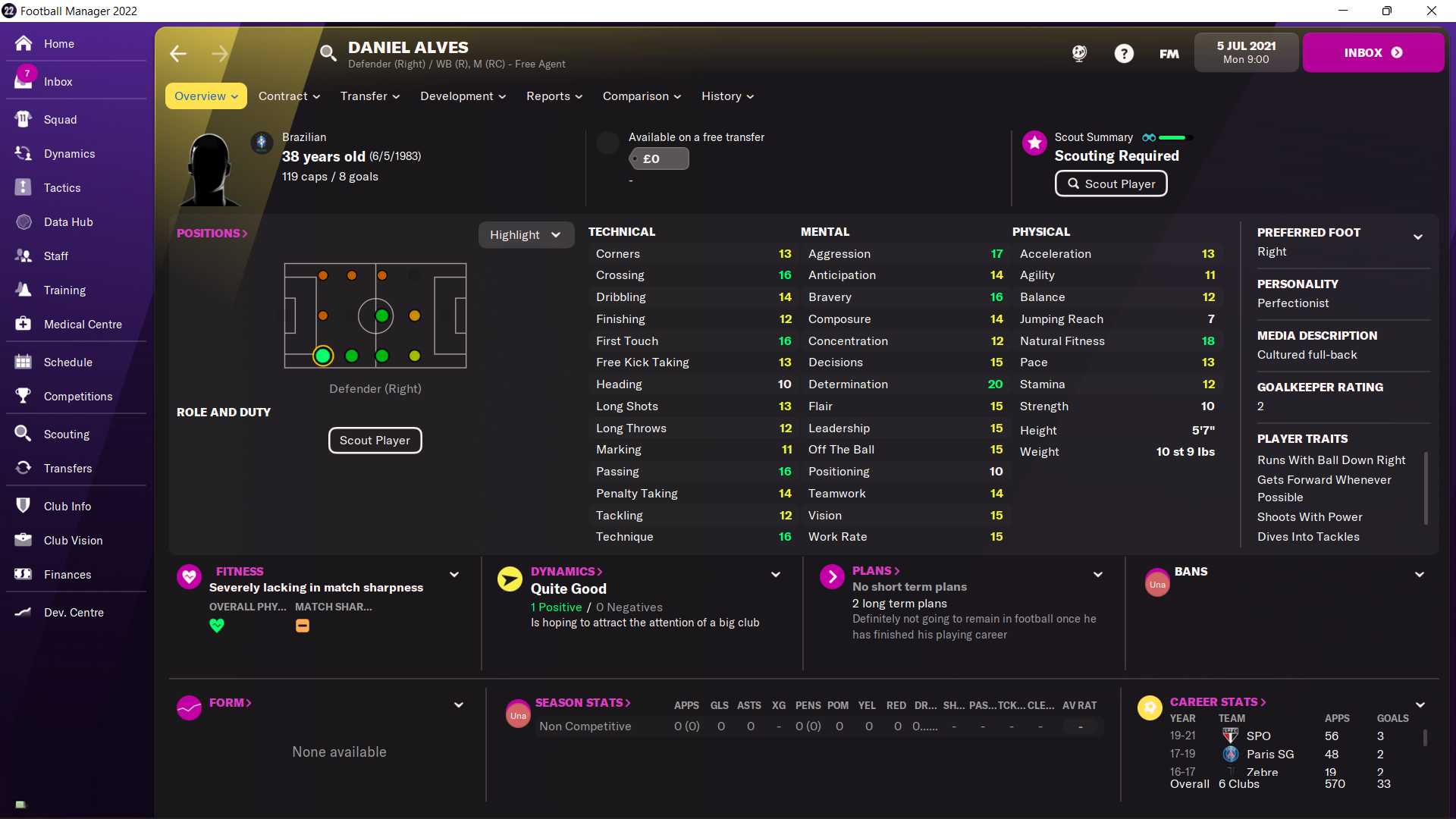 Dani Avles is the oldest player on our free-transfers list and yet he still has great stats across the board and even his physicals make him a decent option for some of the top-team teams in Europe. Obviously, everyone knows Alves for his success at Barcelona but since then he spent a season at Juventus, 2-years at PSG and in 2019 he returned to his homeland to play for Sao Paulo before being released from his contract in 2021. Alves hasn't retired from international football either and so far has earned 119-caps, scoring 8-goals, since 2006. 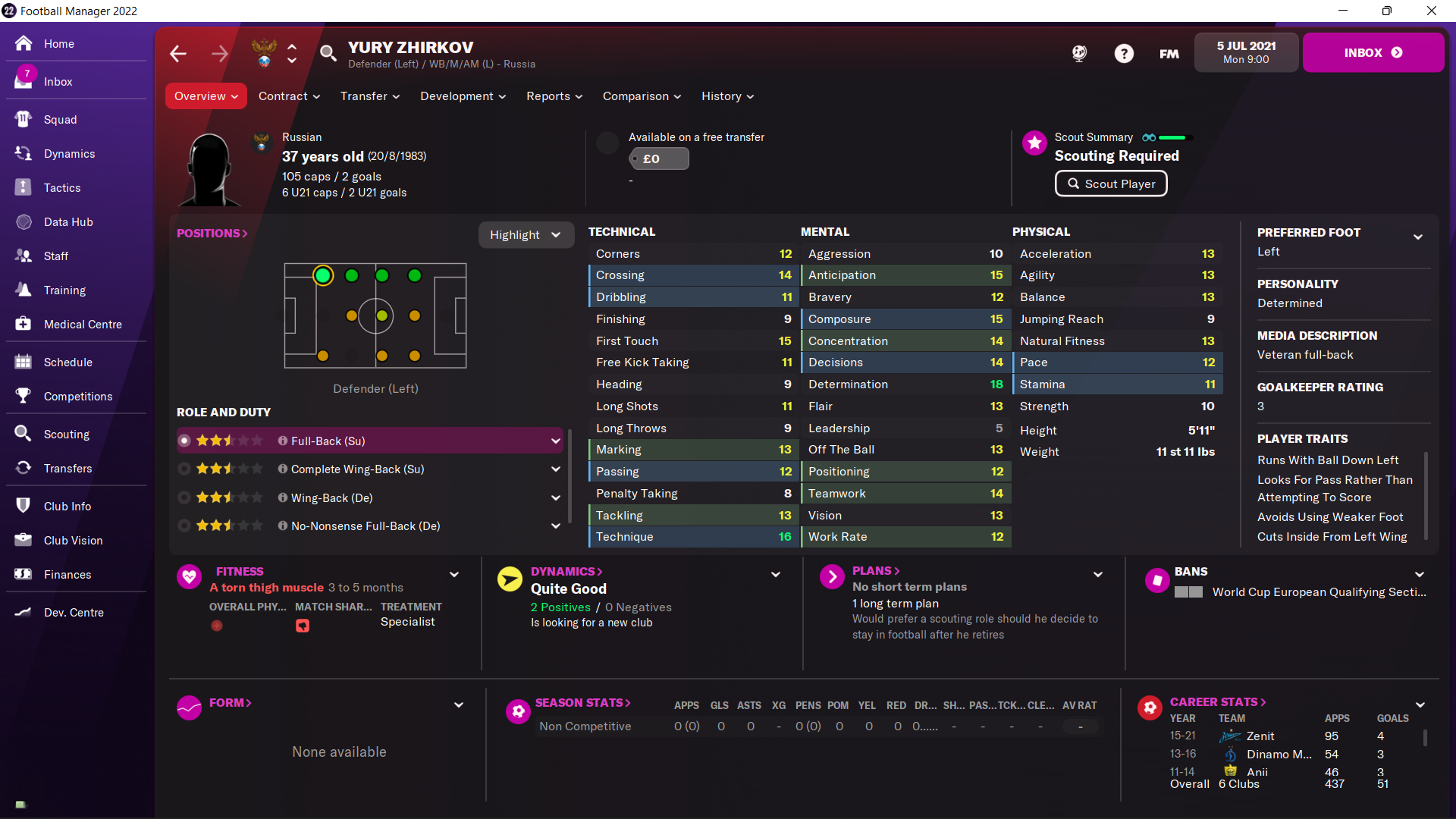 Yury Zhirkov is a left-winger turned left-back who has bags of experience and plenty of quality. Testament to Zhirkov's ability is the fact that he started Russia's opening game at Euro 2020 but picked up an injury and couldn't play in the remainder of the tournament. The Russia wideman first caught the eye at Spartak Tambov in the early 2000s and was soon signed up by CSKA Moscow. Here he would play well over 100 games before making the move to Premier League giants Chelsea in 2009. He spent 2-years in London before moving back to Russia where he had spells with Anzhi, Dynamo Moscow and Zenit. 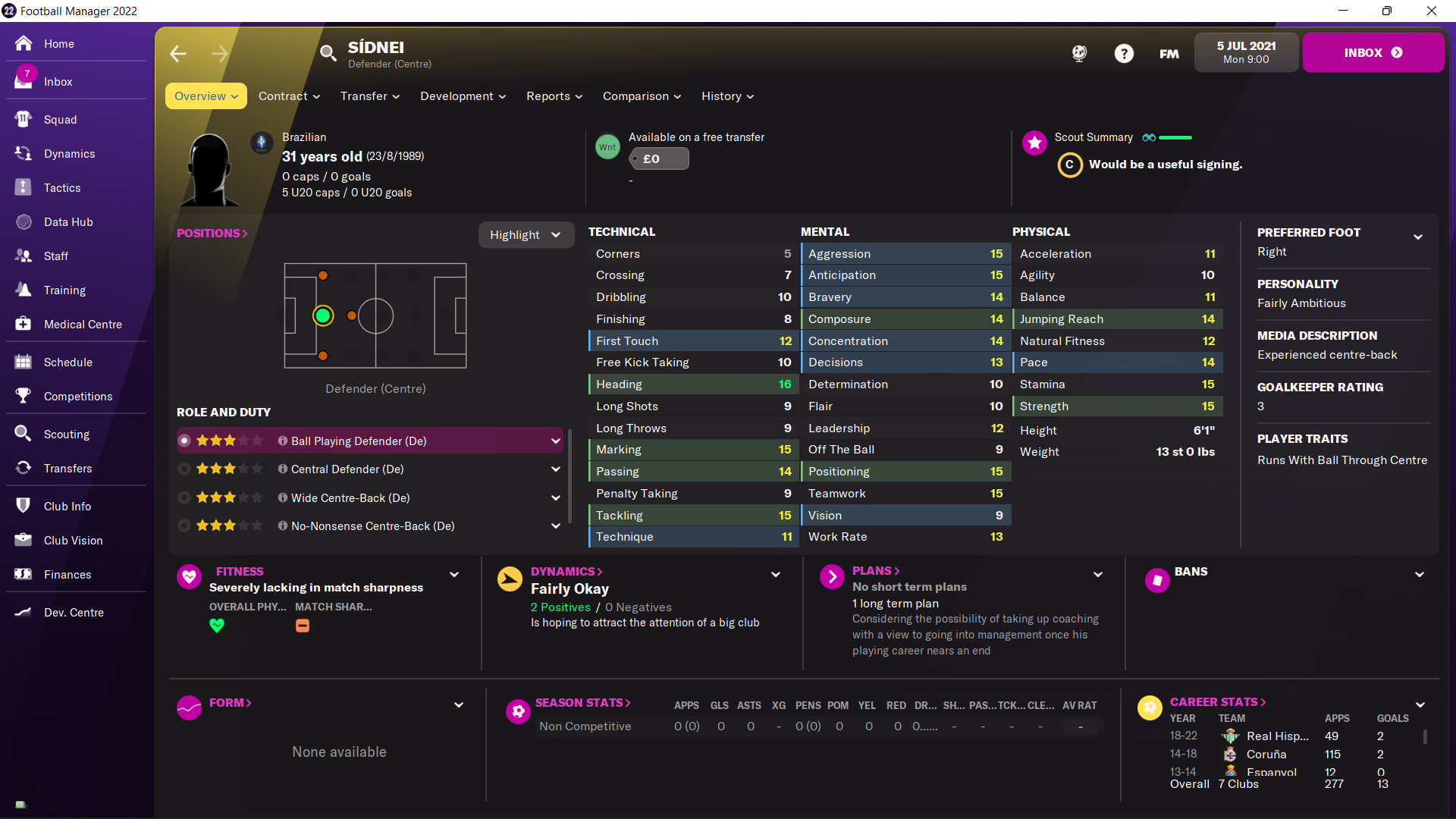 Sidnei was signed by Benfica in 2008 after impressing in his homeland of Brazil for Internacional. The 6'1″ defender enjoyed loan spells at Besiktas in Turkey and Spanish sides Espanyol and Deportivo La Coruna before singing permanently for Los blanquiazules in 2016. Real Betis came calling in 2018 and Sidnei played 49 times in La Liga, scoring twice, before being released in 2021. 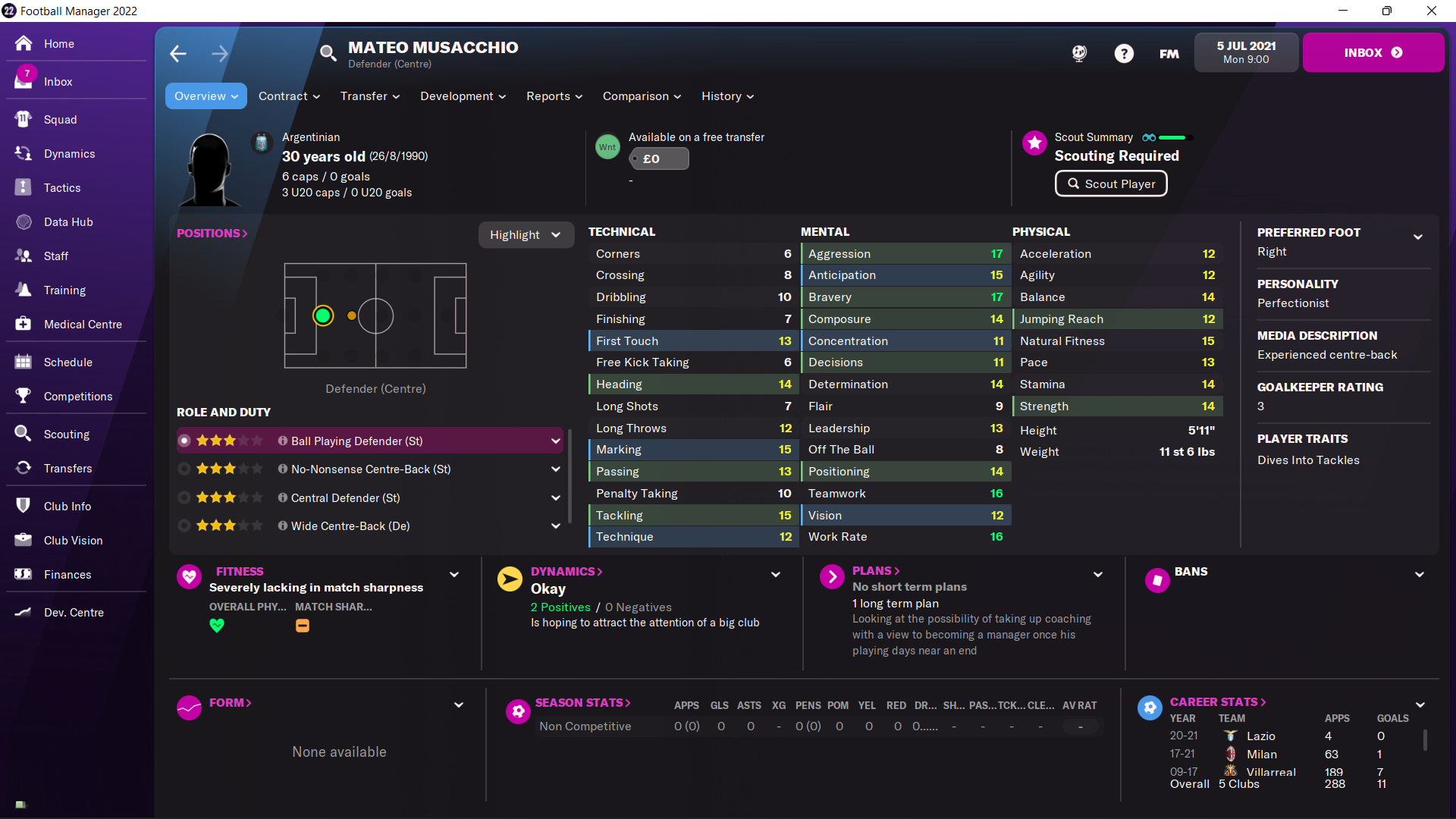 Mateo Musacchio is an Argentina international that possess all the qualities needed in a ball-player centre-back. Musacchio made his name with Villarreal where he is still considered an icon. In 2017 the defender was signed by AC Milan where he remained for 4-years before signing for Lazio but only played 4-games before being released. 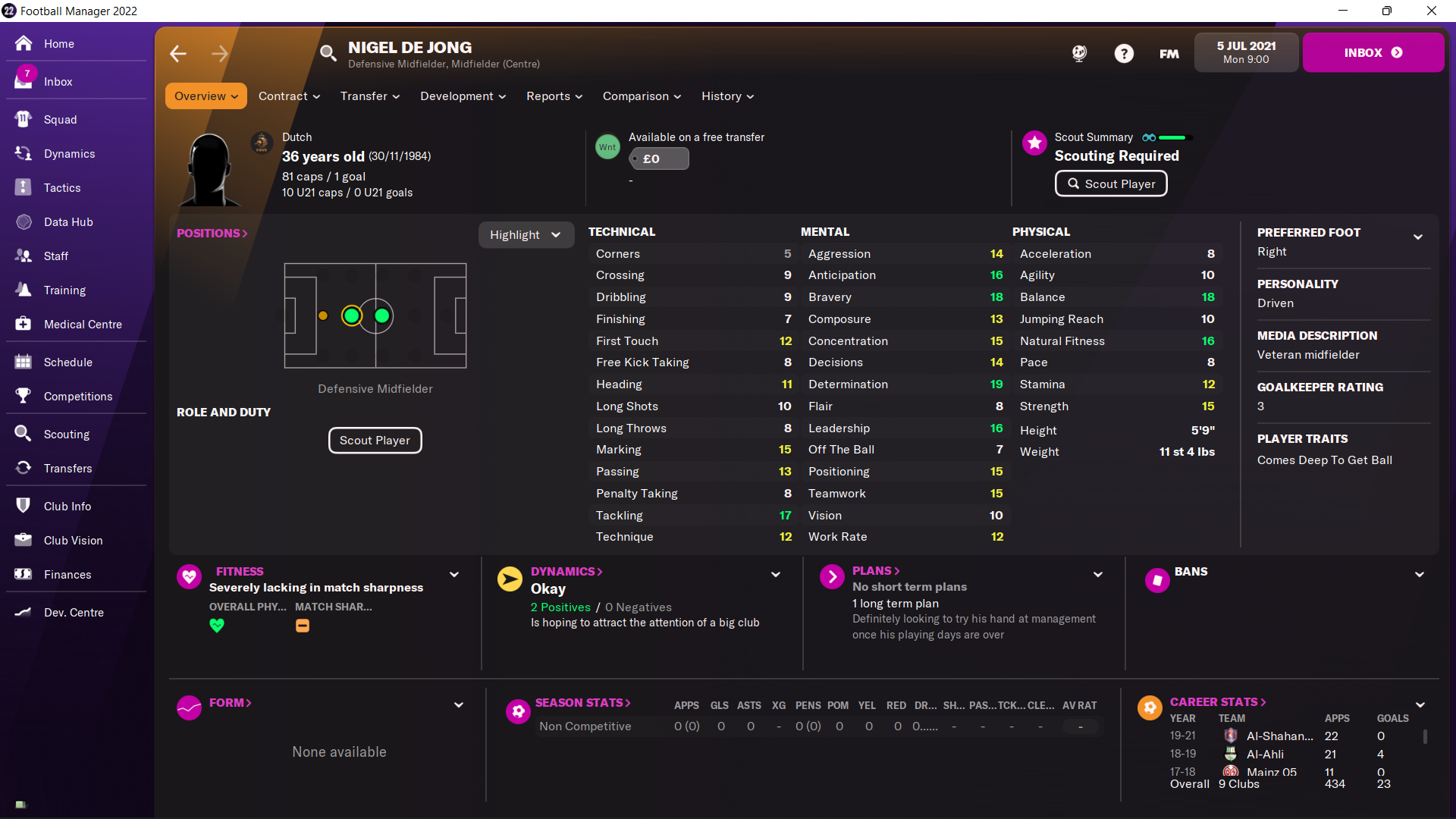 Nigel De Jong seems to be more of a pundit that a footballer these days but still has the stats you'd want from a ball-winning midfielder. The 35-year-old hasn't played in Europe since leaving Mainz in 2018, prefering to spend his time in the Middle East with Al Ahli and Al-Shahania. De Jong has a reputation as a hard man but has backed that up with ability, as his 81-caps for the Netherlands suggest. 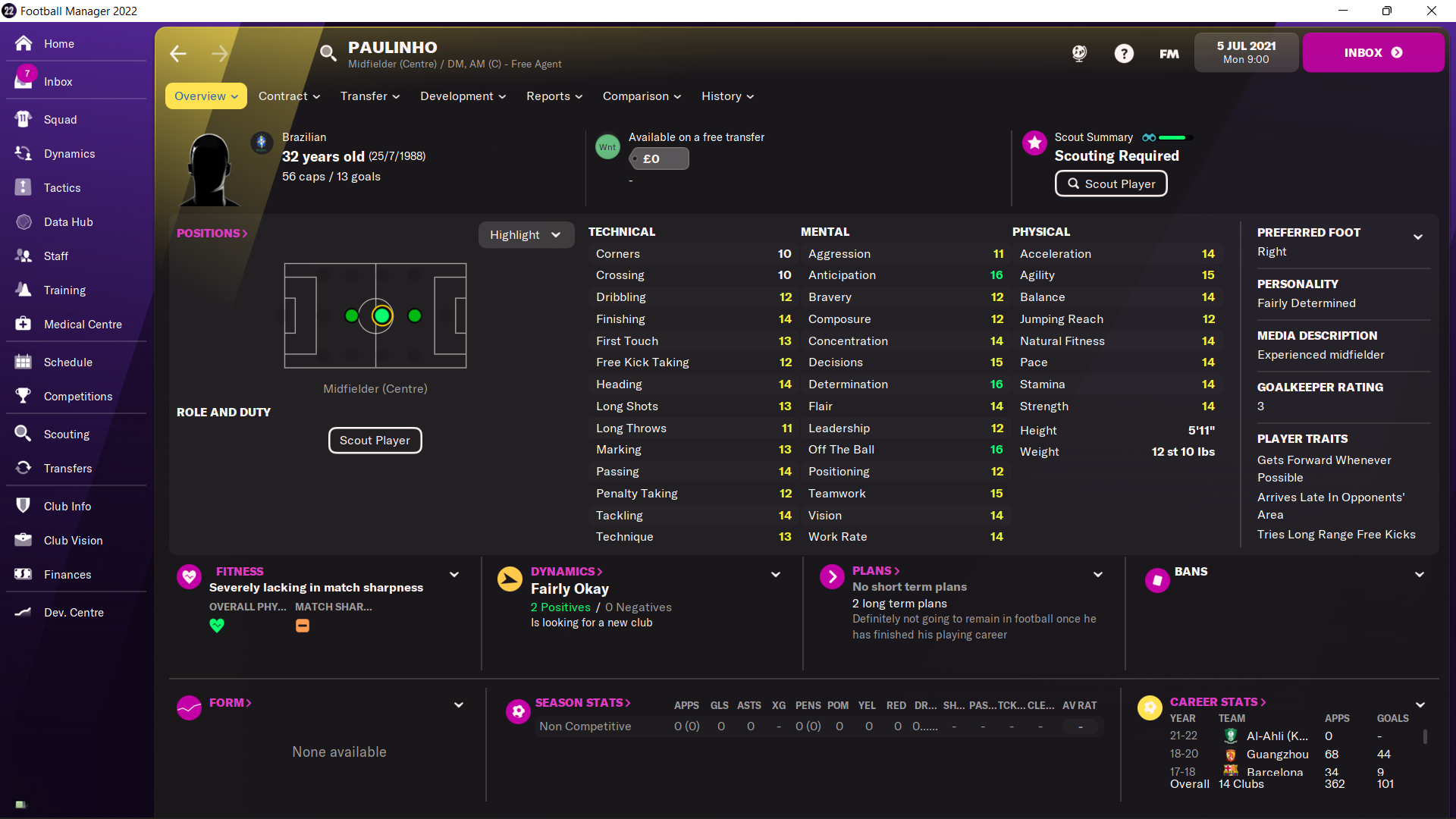 Paulinho is one of the many Brazilians that decided to move to China in the mid 2010s, chosing money over proper football but did then join Barcelona for 20years before moving back out to China with Guangzhou Evergrande. In 2021, Paulinho played four times ffor Al-Ahil, scoring 2-goals, before being released from his contract. We have no doubt that Paulihno would still be playing in China right now had it not been for teh complete collapse in the CSL and the withdrawral of all the funds that were making it possible for the likes of Paulinho to earn an obserd amount of money. Still, he not that old and is an all-round good midfielder that can defend as well as he can attack. 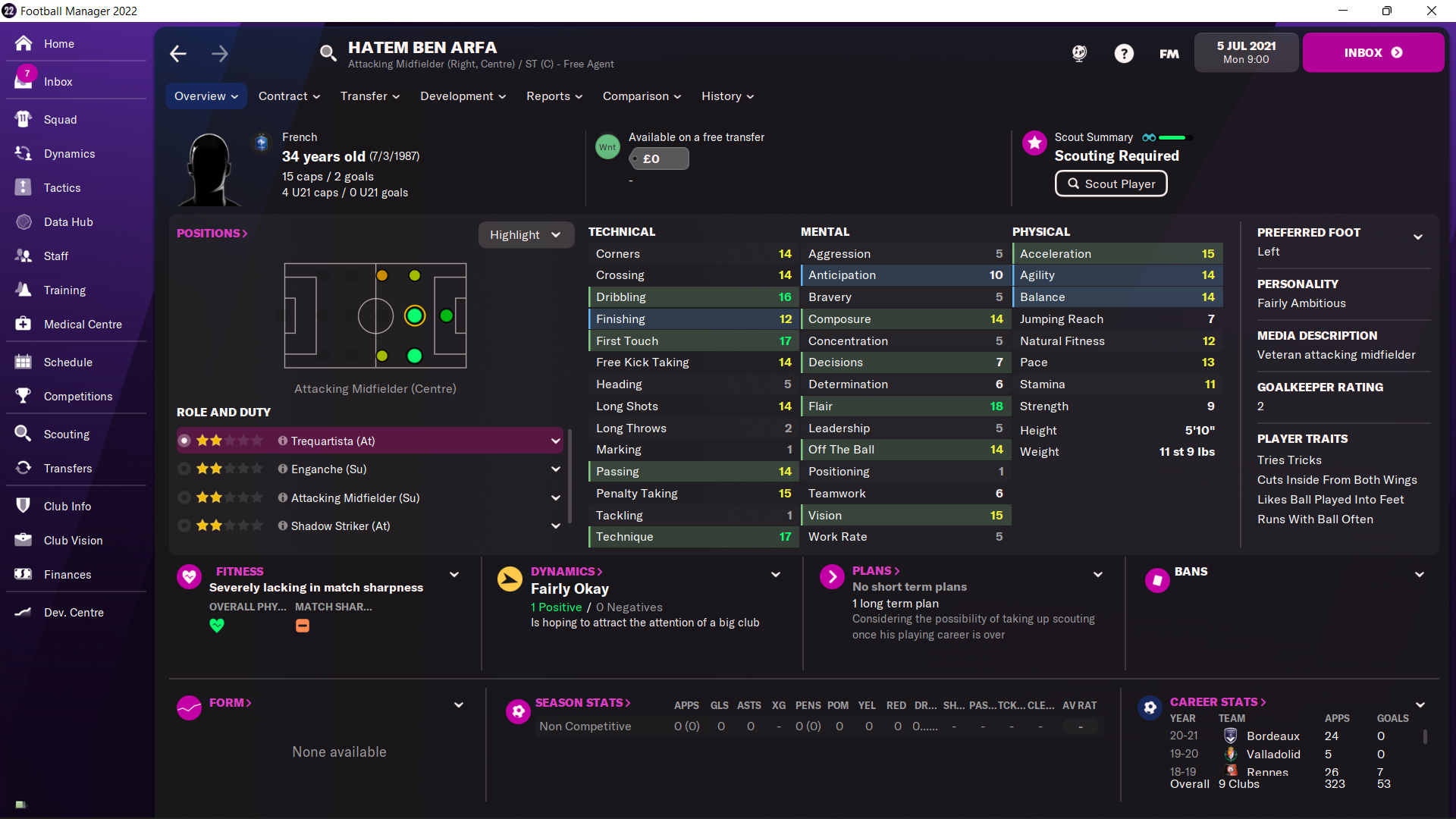 Despite having the lowest star rating of our free transfer eleven, Ben Arfa has been playing the higher quality football of all the players we have chosen, having spent the last 6-years in Ligue 1 and La Liga. We in England will remeber Ben Arfa from his time at Newcastle but since leaving the Toon Army the French international has played for Nice, PSG, Rennes, Valladolid and Bordeaux and still has plenty to offer as a creative and scoring force. 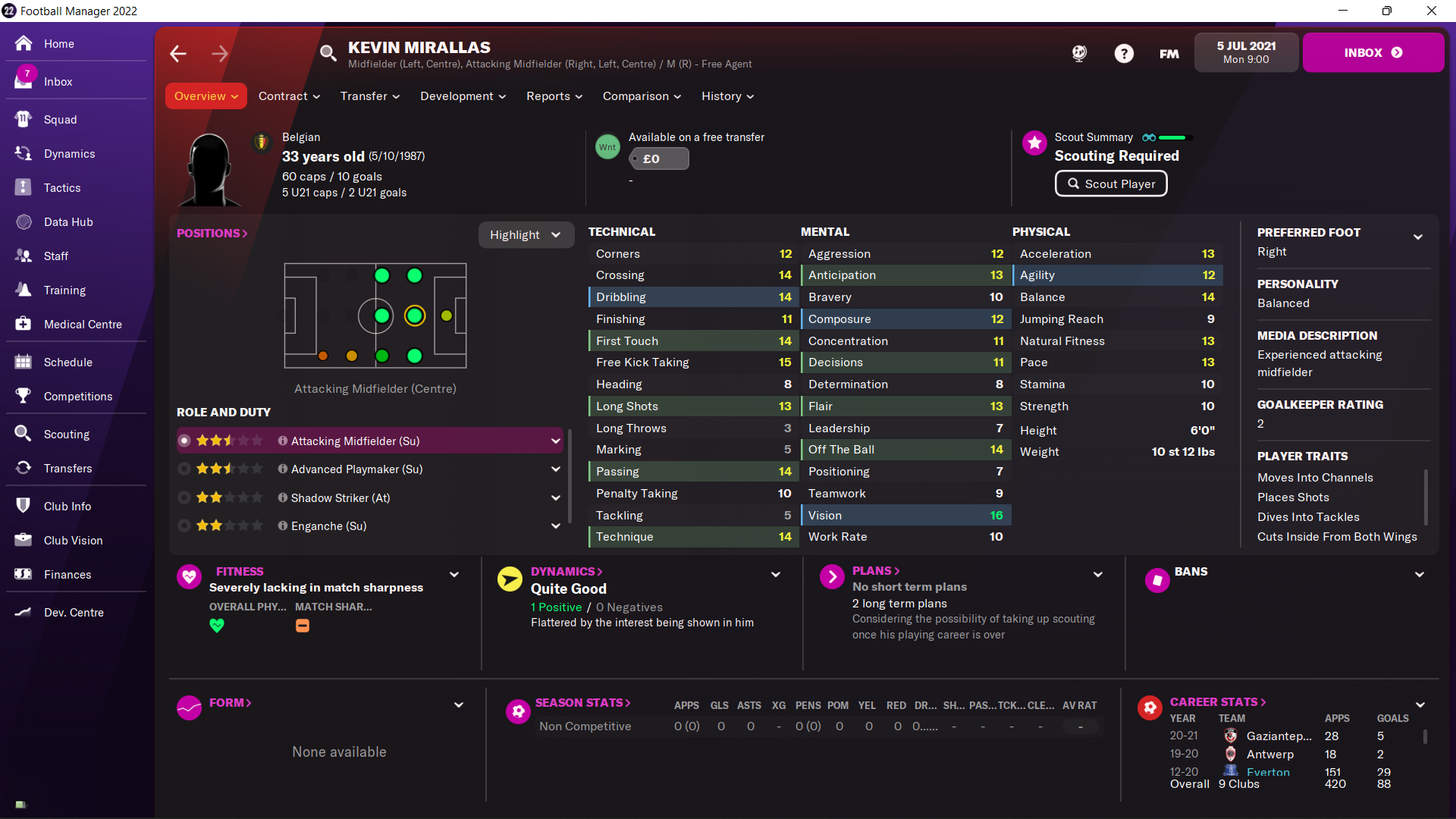 I as an Everton fan, haven't heard much about Kevin ‘Super Kev' Mirallas since he let the Toffees back in 2019. That year he joined Belgium side Royal Antwerpbut left in 2020 to sign for Turkish outfit Gaziantep where he netted 5-goals in 28 appearances in the Super Lig. With 60-caps and 10-goals for Belgium, Mirallas would make a decent signing still as he can play in a number of positions but is unlikely to make the starting lineup in any top-tier side. 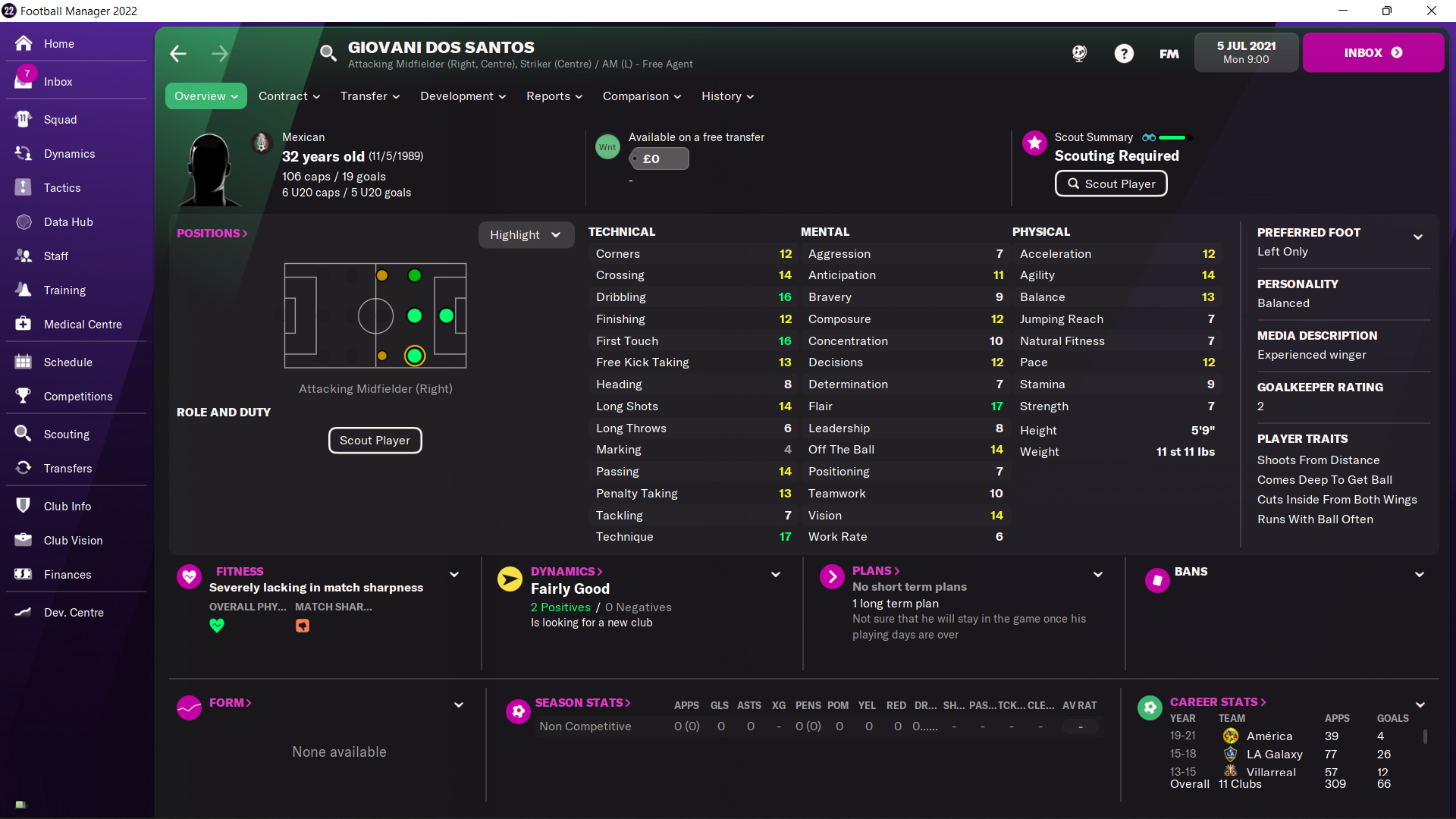 The former Tottenham and Barcelona star enjoyed spells at Mallorca and Villarreal before moving to the United States with LA Galaxy and then onto Mexican side Club America. Scoring and creating goals has always been Dos Santos' bread and milk, and at the age of 32 he still has plenty to offer. Injuries could be an issue but the fact that he can play across the frontline is an added bonus. 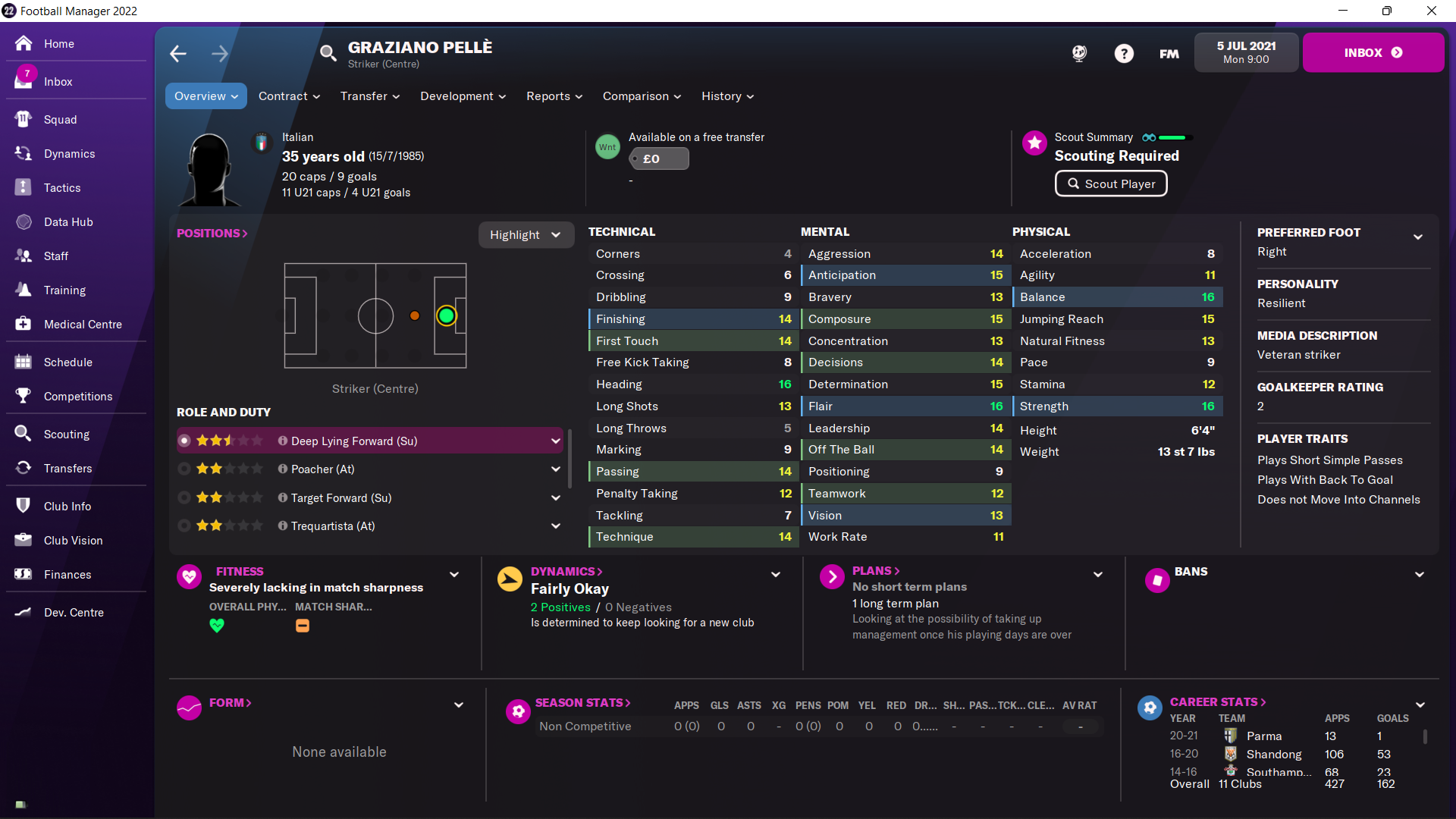 Another player that chose China over competitive football has made it into our list of free transfes in FM22. Graziano Pelle, a former Italian international with 20-cpas and 9-goals, was fitting in perfectly to the hustle and bustle of the Premier League with Southampton before deciding to join Shandong Luneng in 2016. After 4-years in China, Pelle moved back to his homeland with Parmabut only scoreed twice in 14 apperances before leaving the club. As a target man, Pelle hs some great physical stats and still has good heading and finishing ability but is unlikely to make any top-tier clubs actual starting eleven.