Everton don't have the best of home records in the Premier League this season but they are going to have to carve out a victory this weekend if they want to remain in the hunt for the European places. Sheff Utd have been a shadow of their former selves this season and have been condemned to life back in the second tier for what feels like a very long time already. can the visitors muster up one last memorable performance for their fans watching at home?

Read on for our full match preview and prediction for Everton vs Sheff Utd in the Premier League.

Games between these two clubs don't tend to produce a lot of goals, with under 2.5 being scored in six of their last seven encounters. Only two of Everton's last six matches have seen three or more goals scored, while three of Sheff Utd's last four fixtures have ended with under 2.5 goals being produced. The Toffees don't concede many goals but they don't tend to score a lot either, so you can see why we're backing a low-scoring affair this Sunday.

Dominic Calvert-Lewin has had his best-ever season as a professional footballer in 2020/21 and we're backing the former Blade to get on the scoreboard this weekend. The England international has scored 16 league goals and 21 in all competitions for the Toffees, netting 5 in his last 10 appearances for club and country.

Everton out to secure the domestic double over the Blades

Everton were left disappointed not to have secured all 3pts at Aston Villa in midweek but had to settle instead for a share of the spoils. The Toffees rely heavily on the goals of Calvert-Lewin and when he doesn't get enough services or if he doesn't covert one of his chances they usually struggle, as was the case on Thursday. Richarlison has had a poor season all around and none of the Everton midfielders have chipped in with enough goals or really even look like scoring, as we saw with Andre Gomes's tame efforts in the second forty-five. James Rodriguez and Yerry Mina could return to the Toffee's squad this weekend but Gbamin remains sidelined.

Sheff Utd make the trip to Merseyside without Sharp, O'Connell, or McBurnie. but the on-loan Ampadu could return to the squad following a groin strain. The Blades lost 2-0 at home to Crystal Palace last time out and have now lost five of their last six outings in the Premier League. Goals have been the major issues for the Blades this season and that has been reflected in their recent performances, with Sheff Utd failing to score in four of their last five matches. It's tough to see Sheff Utd picking up any points at Goodison Park despite their hosts performing much better on the road than in their own backyard. 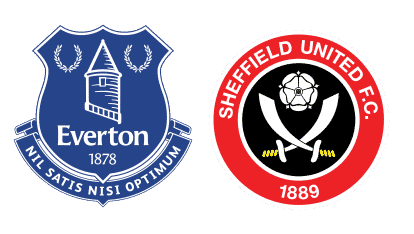