Following the defeat to Newcastle, Frank Lampard now knows just what kind of challenge he has on his hands keeping Everton in the Premier League this season. Up next for the Toffees, a home game against a Leeds side who have scored three goals in each of their last two away games and picked up 4pts in the process.

This game promises goals as both teams have a pretty poor clean sheets record this season. Both teams have found the back of the net in four of the last six meetings between Everton and Leeds, while five of the Toffees' and four of Leeds' last six fixtures in all competitions have also ended with both teams scoring.

At least three goals have been scored in four of the last seven encounters between these two clubs and we're expecting more of the same on Saturday. Five of Everton's and four of Leeds' last six outings in league and cup have produced over 2.5 goals and neither side has managed to keep a single clean sheet during that period.

All you need to know ahead of Everton vs Leeds

Everton gave the ball away far too much and looked panicked in defence against Newcastle, all of which led to a 3-1 defeat at St James's Park.The Toffees' injury record this season has been horrendous, easily the worst in the top flight, and they picked up another two injuries against Newcastle in the form of Mina and Gray. Lampard is likely to change his formation for the game against Leeds, moving to a more familiar 4-2-3-1 or 4-3-3 and is expected to hand van de Beek his debut and could bring Calvert-Lewin back into the starting lineup.

Leeds started brightly away at Aston Villa, taking the lead through James in the 9th-minute. However, the home side scored three times on the run in the space of 13 first-half minutes to move 3-1 in front. James did manage to pull another goal back before the interval and in the second forty-five, Llorente equalised for the visitors and Leeds managed to hold on for a draw.

Everton: Davies, Delph, Godfrey, Doucoure, Mina and Mykolenko are all expected to miss the Leeds game, while Gray is also a doubt.

Leeds: Cooper, Phillips, Firpo, Cresswell, Bamford and Greenwood could all miss the trip to Merseyside. 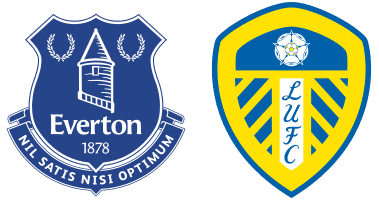