Metz vs. Nice Crystal Palace vs Liverpool Arsenal vs Burnley Lyon vs Saint-Etienne Watford vs Norwich

Once upon a time, Leeds United were the team that dared to dream. They were youthful, vibrant, energetic and exciting. With a manager who had never managed before and an idealistic group of players so fresh-faced as to appear out of place amid the cut-and-thrust of the Premier League, they flirted with greatness. Entering the new millennium they challenged for trophies both domestically and on the continent, ruffling the feathers of football’s elite along the way.

The dream never quite became reality and, eventually, turned into a nightmare as mismanagement, financial meltdown and successive relegations took the club to new lows. But, for a brief yet glorious period, Leeds were everyone’s second-favourite team; an example for others to follow.

It all began in 1998. George Graham had stabilised the club and returned them to the Premier League’s top six before jumping ship for Tottenham early in the 1998-99 season. His decision left Leeds temporarily without direction and more pertinently, with Martin O’Neill opting to remain at Leicester, without a manager. Lacking in alternatives, Graham’s assistant, David O’Leary, was handed the reins.

Formerly a classy centre-back with Arsenal, O’Leary had ended his playing career with Leeds before joining the backroom staff. He was well regarded as a coach but had never been in such a lofty position and, at 39 years old, was considered relatively young as well as inexperienced for the role of manager. However, age was no barrier for the Irishman, something he proved emphatically with his team selections.

One of his first decisions was to bring in Jonathan Woodgate, a tall but refined 18-year-old centre-back who had come through the club’s Thorp Arch academy. Another graduate of the club’s youth system, Stephen McPhail, was handed a starting spot. An elegant midfielder with a lovely left foot, he had been described as ‘the next Liam Brady’ by Graham, who had handed him his debut, though it was only under O’Leary that he became a regular. While Woodgate and McPhail were impressive, another academy product encapsulated the times perfectly.

Alan Smith, known affectionately as ‘Smudger’ came off the bench at Anfield as Leeds trailed Liverpool 1-0. Making his debut, the 18-year-old promptly equalised with his first touch, a shot from outside the box. Leeds went on to win 3-1 in a match that altered the course of their season. A local lad, passionate and utterly devoted to the cause, Smith symbolised the early stages of the O’Leary era.

To guide the younger players, some experience was needed. Initially this was provided by commanding South African centre-back Lucas Radebe; a player who, while compassionate, caring and constantly smiling off the pitch, was a true competitor on it. O’Leary added to the spine of his team by bringing David Batty back to the club in December, singing the English international for a £4.4 million fee from Newcastle. Batty was another home-grown player, albeit one that had spent time away, but he was also seen as just the sort of feisty hard-man needed to offer protection to a developing team.

After an 11-match unbeaten run, Leeds ended the season in fourth place, their highest finish since winning the league in 1992. However, in the summer of 1999, Jimmy Floyd Hasselbaink, a powerful striker and the team’s main source of goals, left for Atletico Madrid. Fortunately, his £12 million fee wasn’t wasted; instead, it was used to augment the transfer budget as O’Leary pursued additions to his squad.

Seeking to build on the youthful vitality already present, Leeds brought in Danny Mills from Charlton, Darren Huckerby from Coventry and Michael Bridges from Sunderland. Mills was a tough, dynamic right-back and Huckerby a fluid attacker, but it was Bridges who made the biggest impact. In his first season, the forward hit 19 league goals, among them some beautiful finishes.

Leeds entered the new century on top of the Premier League, a fitting position given they were increasingly being viewed as the future of English football. Their mix of home-grown players and high-tempo football was catching the eye, with their starting line-up predominantly populated by players who were either still teenagers or in their early 20s.

23-year-old set-piece specialist Ian Harte had the left-back berth locked down, while 22-year-old Lee Bowyer offered unrivalled work ethic in midfield. Meanwhile another 22-year-old midfielder, Eirik Bakke – who was signed from Norwegian club Sogndal – could slot in either on the right or in the centre. These three complemented the likes of Woodgate, Mills, McPhail, Smith and Bridges, ensuring O’Leary had players willing and able to be moulded to his own ideals. 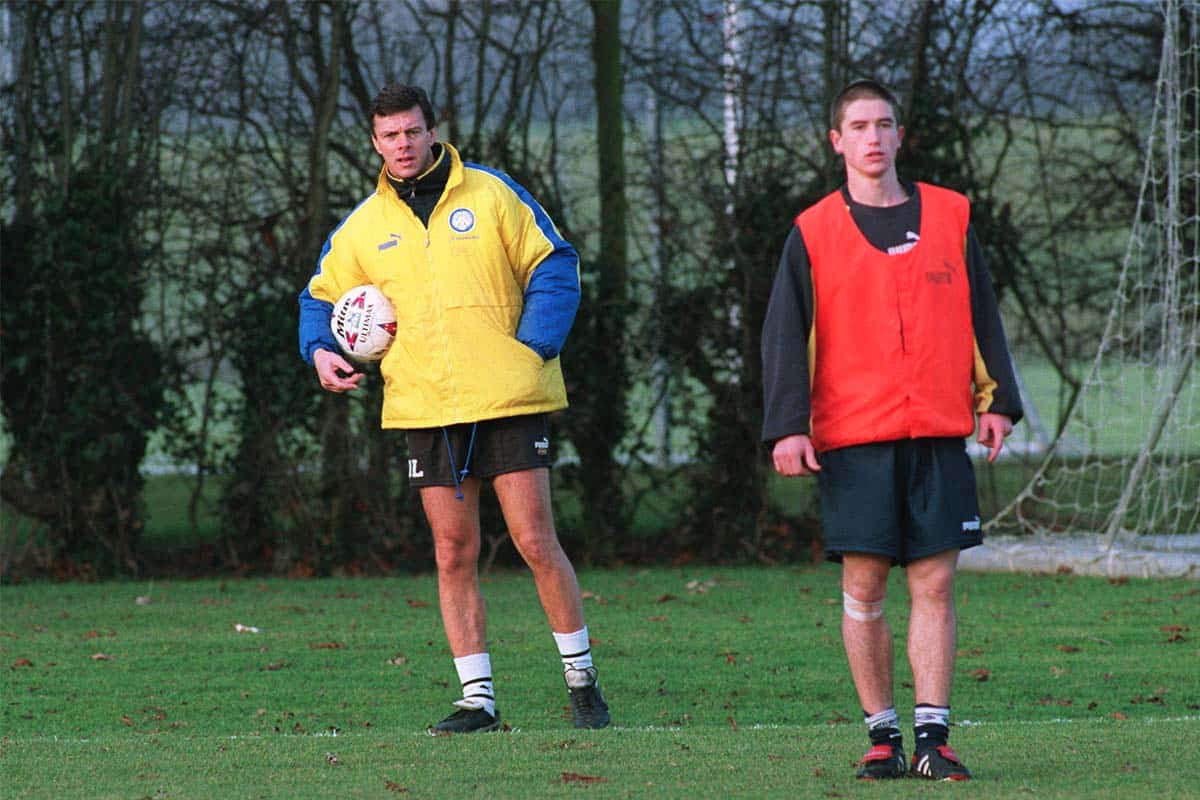 Arguably the manager’s most important call was assessing how to maximise the talent of 21-year-old attacking maestro, Harry Kewell. The Australian was already established in the first team prior to O’Leary’s taking charge, but he had been wildly inconsistent and frequently ineffective. O’Leary made space for the player by setting his team up in either a lop-sided 4-4-2 or a 4-3-1-2, allowing Kewell – a dazzling dribbler with a wicked left foot – greater freedom to fizz around in attacking areas.

That season Leeds finished third, their title challenge faltering on the back of four successive defeats in April, though they did also reach the semi-finals of the Uefa Cup, where they were eliminated by eventual winners Galatasaray. In spite of the melancholic end, the campaign had delivered enthralling football and, with Champions League football on the horizon, the future appeared bright.

In the following season, O’Leary’s Leeds captured the imagination once again. However, with an aggressive transfer policy, the club was also transmogrifying into something completely different. The days of self-sufficiency were being left behind in favour of a less romantic, more outlandish outlook.

In the summer of 2000, assertive midfield technician Olivier Dacourt and languid finisher Mark Viduka joined for a combined fee of £13.7 million. Then in August the squad was further enhanced by the addition of Liverpool’s Dominic Matteo for around £5 million. By November, the club’s spending was taken into another stratosphere by the signature of West Ham’s ball-playing centre-back Rio Ferdinand for a British record breaking £18 million fee.

Leeds were spending huge money, but they were justifying it on the pitch, at least in Europe. Handed a tough Champions League group including Barcelona and AC Milan, O’Leary’s side progressed thanks to a home win over the Rossoneri which was followed up by a draw in the San Siro, courtesy of a now-famous Matteo header. Barcelona would be forced to settle for a place in the Uefa Cup.

In the next round, Leeds were again drawn in a difficult group. To reach the last eight they would have to get beyond the galacticos of Real Madrid, Sven-Goran Eriksson’s expensively-assembled Lazio, replete with Juan Sebastian Veron, Pavel Nedved, Hernan Crespo and Alessandro Nesta, as well as an Anderlecht side boasting a potent little-and-large strikeforce of Jan Koller and Tomasz Radzinski. Again, Leeds defied the odds, proceeding thanks in the main to a victory in the Stadio Olimpico, courtesy of a well-worked team goal finished by Smith.

The quarter-finals saw Leeds face Deportivo La Coruna, the reigning Spanish champions, though once more the Yorkshire side were not to be denied. They powered beyond Javier Irureta’s bewildered outfit thanks to a 3-0 win at Elland Road. The remarkable run eventually culminated in the semi-finals where, at the Mestalla, Leeds lost 3-0 to Valencia.

In the years that followed, Leeds continued to spend big, but failed to continue their European feats of 2000-01. Chairman Peter Ridsdale had banked on continued Champions League qualification, borrowing £60 million against expected future gate receipts. However with fourth and fifth-place finishes denying the club entry to Europe’s elite competition, Leeds were forced to gradually sell their best players.

Ferdinand, Robbie Keane and Robbie Fowler all left the club in 2002 for a combined £43 million, though the sale of Woodgate to Newcastle for £9 million in January 2003 was seen as the last straw for many, including Terry Venables, who had replaced O’Leary in the dugout following the Irishman’s sacking. In 2003, Leeds finished 15th in the league. The following year the club was relegated after Bowyer, Kewell, Martyn and Dacourt had all been moved on in cut-price deals.

With the prospect of life not only outside of European competition, but outside of the Premier League, Leeds had no choice but to continue their asset stripping. And, like vultures over a carcass, teams swooped to pick up their finest talent. Paul Robinson, Harte, Matteo, Mills, McPhail and Viduka all departed. Batty retired; Bridges, after years of harrowing injury troubles, was released. The latest academy graduate, James Milner, joined Newcastle for £5 million. But perhaps the most perturbing sale was that of Smith to Manchester United.

For Leeds fans, the dream was conclusively over. However, with another relegation ahead of the club in years to come, the nightmare was only just beginning.