Hull City to Win and Over 2.5 Goals

Hull's season had threatened to implode during February but the Tigers are well and truly back on track now. They're unbeaten in seven having won five and drawn two. Of their last five on the road, they've won three with each of those victories featuring over 2.5 goals. Crewe aren't water tight at home either – they suffered a 3-0 defeat to Burton last time out at Gresty Road.

Wilks sits on top of Hull's scoring charts with 17 goals to his name in League One this season. His last five games have only resulted in one goal but look across 10 games and he's notched eight in that time. With Grant McCann known to be pleased with Wilks' all round game, he's bound to start on Friday. It's only a matter of time until he ends his three game ‘drought'.

This handicap prediction could be seen as a bold one with Crewe far from pushovers. There is sound logic to our tip though. Hull have won six of their last 10; all of them have been by a margin greater than one goal. Crewe meanwhile have lost four over the same time period. Three of those defeats have been by a margin of more than one. It all adds up, doesn't it?

All the stats and odds for Crewe vs Hull City

Hull are nervously watching over their shoulders in their race to win automatic promotion whilst Crewe are firmly in holiday mode with a mid-table finish all but guaranteed. They won't just roll over to have their tummies tickled by the Tigers but an attacking trio of Wilks, Keane Lewis-Potter and Josh Magennis, who will be back from international duty, is going to take some stopping. It's hard to see them holding firm throughout the full 90 minutes and Hull could win the game with room to spare.

FAQ about Crewe vs Hull City 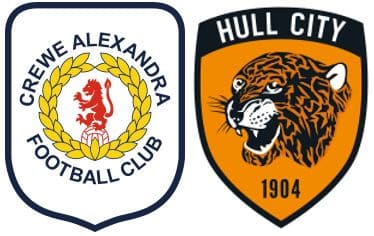