Coventry vs Preston: Check out our betting tips

Coventry's hopes of a playoff race looked dead a little while ago but they're showing signs of a revival in recent weeks. Can they continue that here? Find out with our Coventry vs Preston match preview with free tips, predictions and odds mentioned along the way.

The sky will be blue for Coventry

If the game itself should be finely balanced then the same cannot be said for this over and under goals bet; we are backing under 2.5 goals and the stats are strongly stacked that way. Three of Coventry's last five matches have gone under 2.5, four of Preston's previous five have gone south of the 2.5 cut off too and four of the last five head to head meetings have seen a maximum of just two goals as well. It's hard to see this game being loaded with goals when considering all of that.

Here are the key stats & form guide for Coventry vs Preston

Coventry's resurgence of form has put them back in the mix for a playoff spot. Preston, who are only a few places back, have no hope but could putting a nail in the coffin of the Sky Blues be incentive enough?

Coventry have boomed back into form in recent weeks after seemingly falling out of the promotion picture. Of course, they still have a fair bit of work to do but another win here will ensure they go into the final stretch of the season with real momentum behind them.

Preston's season is very much a ‘typical Preston season' as they've neither pulled up any trees nor have they ever looked in danger. In all realism, the playoffs are out of reach so between now and May it's all about picking up as many points as they can for self pride. 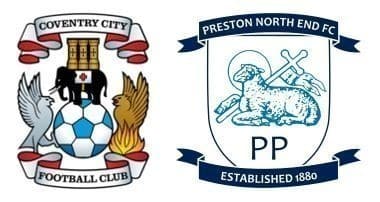