Blackpool and Coventry currently occupy 12th and 13th place respectively in the Championship table with both on 40 points. Who wins as they lock horns here? Find out with our Coventry vs Blackpool match preview with free tips, predictions and odds mentioned along the way.

Blackpool to take the points

With Blackpool visiting the Coventry Building Society Arena it's possibly quite the call to back the Seasiders to leave with all three points but that's exactly what we see happening. Blackpool are in good form right now with their last four league games seeing them take 10 points; the only blemish across their last four games being a draw with Fulham. Coventry meanwhile just can't find the way to get a win; they've only managed three in their last 10. The Sky Blues gave a good account of themselves in cup action at the weekend but, ultimately, that ended in an extra time defeat; all they'll bring into this match is fatigue.

Our next tip for this match is that it will be a low scoring one. Coventry have seen each of their last three matches end under the 2.5 cut off with Blackpool only marginally higher; they've had three of their last five matches fall under 2.5 and even then their average across the five games in question is just 2.2 per game. You also have the head to head record to consider; four of the last five meetings between the sides have fallen south of the 2.5 mark. It all points to another goal shy day at the office.

Check out the key stats & form for Coventry vs Blackpool

It's a sad state of affairs when it's the first week in February and your season is effectively over; that's exactly where these two find themselves though. Can they serve up a good watch if nothing else?

Coventry will look at this season as one that's got away from them. Sure, you can say they were punching above their weight earlier in the campaign but they had momentum and we're in the mix. It's now about finishing the campaign as well as possible.

Blackpool kicked this campaign off with a different form of momentum to their hosts and they'll be delighted to sit in mid table; most tipped them to go down. After a dip in form, things look good again at Bloomfield Road. Will it stay that way through until May?

A brief FAQ ahead of Coventry vs Blackpool 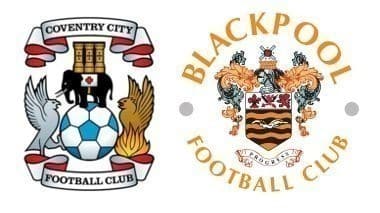