Following Brian Clough's disastrous 44 days in charge at Elland Road, Jimmy Armfield somehow guided what was left of Don Revie's Leeds side into the European Cup final in Paris on May 28th 1975. Bayern Munich eventually won the match 2-0, but the game was not without controversy and to this day remains one of the most talked about European Cup finals of all time – for all the wrong reasons.

Having won the league the year before in a campaign that finally saw them lose their “nearly men” reputation, Leeds had now earned the right to play the best sides on the continent for the right to call themselves champions of Europe in the days when only the best qualified for the tournament.

Domestically, though, Leeds United were a shadow of the side who had claimed the Division One crown the previous season. Manager Don Revie had left to manage the England side and was replaced by Brian Clough; an appointment which was unpopular to say the least as Clough had often made public his dislike for both Revie and his Leeds players.

After Clough’s infamously short-lived time in the Leeds hot-seat – a period which had seen his team win just one game out of their first six and the new boss fall out with several key players – United’s directors decided to sack Clough, a humiliation he never truly recovered from.

Taking what was now seen as a “poison challis” was former England international Jimmy Armfield, who had previously managed Bolton Wanderers, had inherited much of Revie’s league winning side as he tried to get the side back on-track. However, the reigning champions of England would only finish 9th in a season which was salvaged thanks to a memorable, if not infamous, European campaign.

Having despatched Zurich FC 5-3 on aggregate in the first round of Europe’s premier trophy, Leeds progressed to face somewhat unknown opposition in the form of Hungarian outfit Újpesti Dózsa, who they ultimately breezed past 5-1 over two-legs. In the quarter finals Leeds comfortably got past Anderlecht, which meant they would now face the mighty Barcelona in the semi-final.

Barca were a team of stars under the guidance of the legendary Rinus Michels who had won the Spanish League with ease a year earlier. They were desperate to go one better and win the European Cup and boasted the likes of Johan Cruyff and Johan Neeskens in their ranks. But the Catalans were no match for a strong and skilful side who would not be intimidated by anybody, no matter how famous or glamorous. 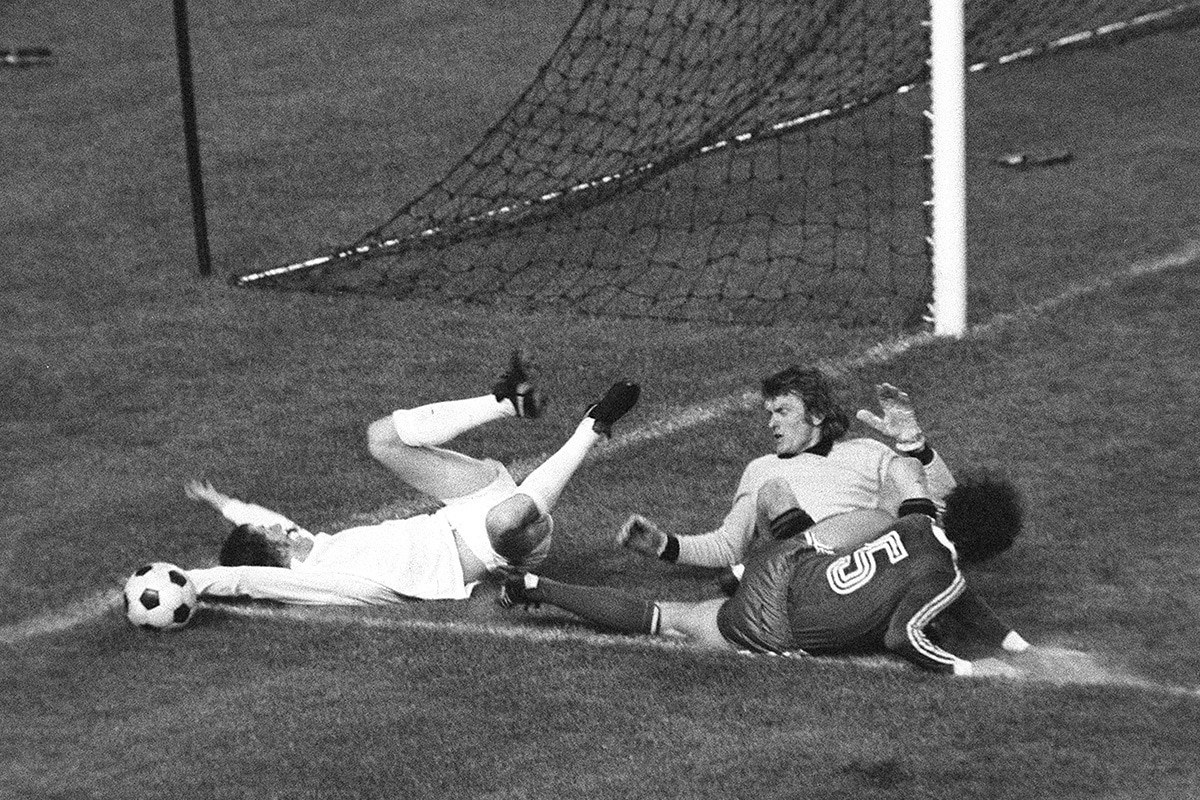 A 2-1 win in the first-leg at Elland Road set the tie up perfectly and when United extended their lead at the Nou Camp after Lorimer latched on to a Jordan flick Leeds looked to be as good as in the final. However, Barcelona had other ideas and in the second half, Clares got one back; but the English side held out to reach their first ever European Cup Final.

To mark the 20th anniversary of the competition, UEFA decided to hold the 1975 final in Paris, the very city where Real Madrid had lifted the first European Cup back in 1956. So it was that the reigning champions would face a Leeds side that, although they had won six major titles in the previous decade, had finished as also-rans on 10 other occasions and were determined that they would not be the bridesmaids once more.

United’s opponents, Bayern Munich, had endured something of a troubled season themselves. Despite having won the cup the year before, they had finished this campaign firmly in mid-table and only beating Leeds in the final would ensure qualification for next season’s tournament – unlike today when a 4th place finish will do.

So, as the biggest team in Germany, cup holders and well respected giants of European football lined-up to take on the less attractive yet just as dangerous Leeds United in the French capital, something had to give. Many predicted a riot and they weren't disappointed.

In fact it took only four minutes before things turned ugly when Terry Yorath’s challenge led to on Bjorn Andersson being carried off. “It was the most brutal foul I think I have ever seen,” Uli Hoeness later said. Yorath avoided a red card, but that would probably be the only thing that went Leeds' way that night. 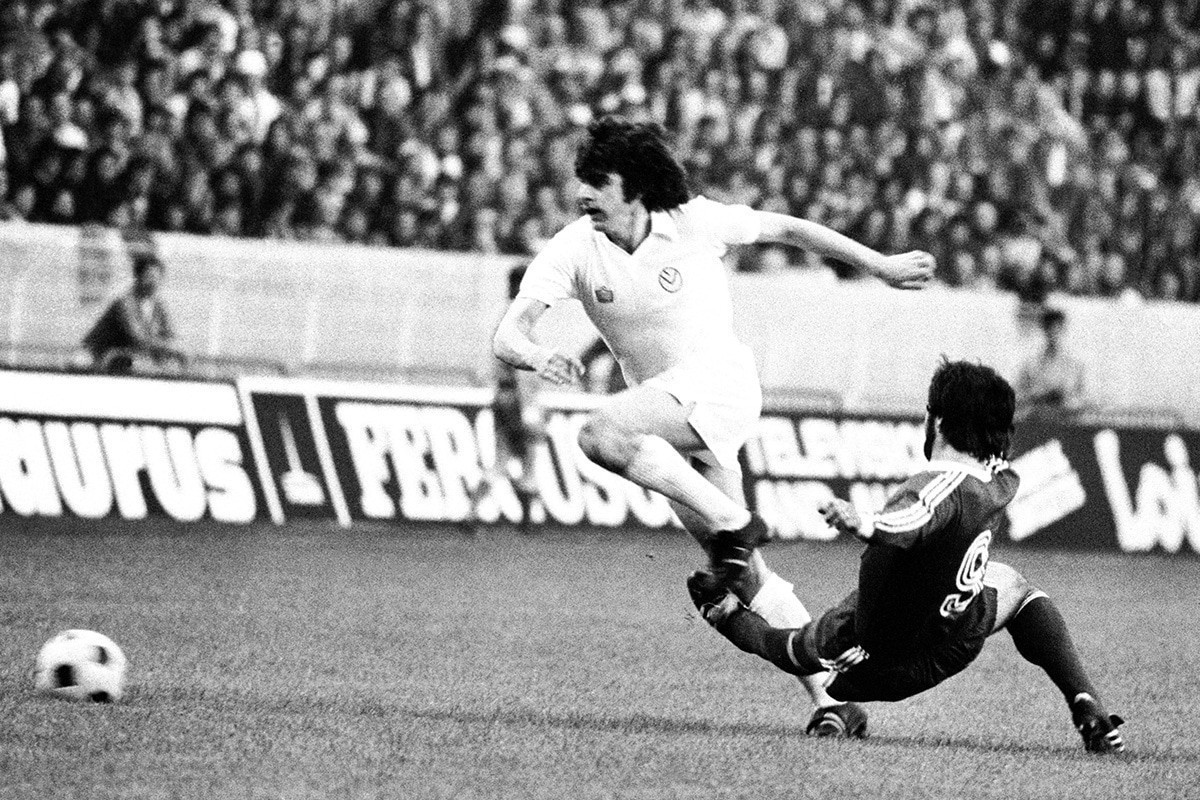 Leeds dominated the early stages and Bayern spent much of the first half defending, it appeared to be only a matter of time before the opening goal, then came two of the most contentious issues in the history of European finals.

What looked like a clear handball inside the box by Beckenbauer went unnoticed by the referee who waved away the Leeds player's protests and then, just minutes later, the very same German defender smashed into Clarke inside the penalty area for what looked like a clear foul. Even Beckenbauer later admitted that the second incident should have been a penalty, but on both occasions French referee Michel Kitabdjian gave absolutely nothing.

If that decision led to the bemusement of the United players and thousands of Leeds fans who had crossed the channel, worse was to follow 20 minutes into the second half. When Johnny Giles sent over a free-kick, and the ball broke loose in a crowded area, Peter Lorimer smashed it into the net for the opening goal of the game. Leeds fans and players celebrated wildly, but their joy was cut short as the referee disallowed the goal for offside, even though the linesman kept his flag down.

Lorimer remembers the incident well; “I can picture the finish clearly,” he later explained. “I caught the ball perfectly on the volley and smashing it into the corner of the net. The first thing I did was look at the referee because I wanted to make sure he’d awarded it. He pointed clearly to the centre circle. There was no reaction from the linesman, or nothing. Then Beckenbauer started having words with Kitabdjian and to our total disbelief, the goal was ruled out.”

Replays later showed the decision was marginal at best, but the mood had turned quickly and what was already a tense atmosphere was about to get much, much worse. Many Leeds fans were unable to contain their sense of frustration and missiles now began to rain down from behind one of the goals.

“There’s no doubt in my mind that Leeds were robbed,” said former boss of England’s match officials Keith Hackett when looking back at the incidents. “The penalty was nailed on and, although Bremner was given offside under the law interpretation of the day, he actually wasn’t. He was close to it but not quite. The tell-tale sign that the officials were swayed by protest is that the linesman had actually run back to halfway before he was consulted. He could have flagged but he didn’t do so.”

With 20 minutes remaining, and the French referee still giving nothing Leeds' way, things got worse as a shot from Franz Roth, following a neat passing move, crept past David Stewart. Leeds fans began to use anything they could get their hands on as missiles while others attempted to climb the wall that stood between them and the pitch as fighting broke out between the fans and the French police. 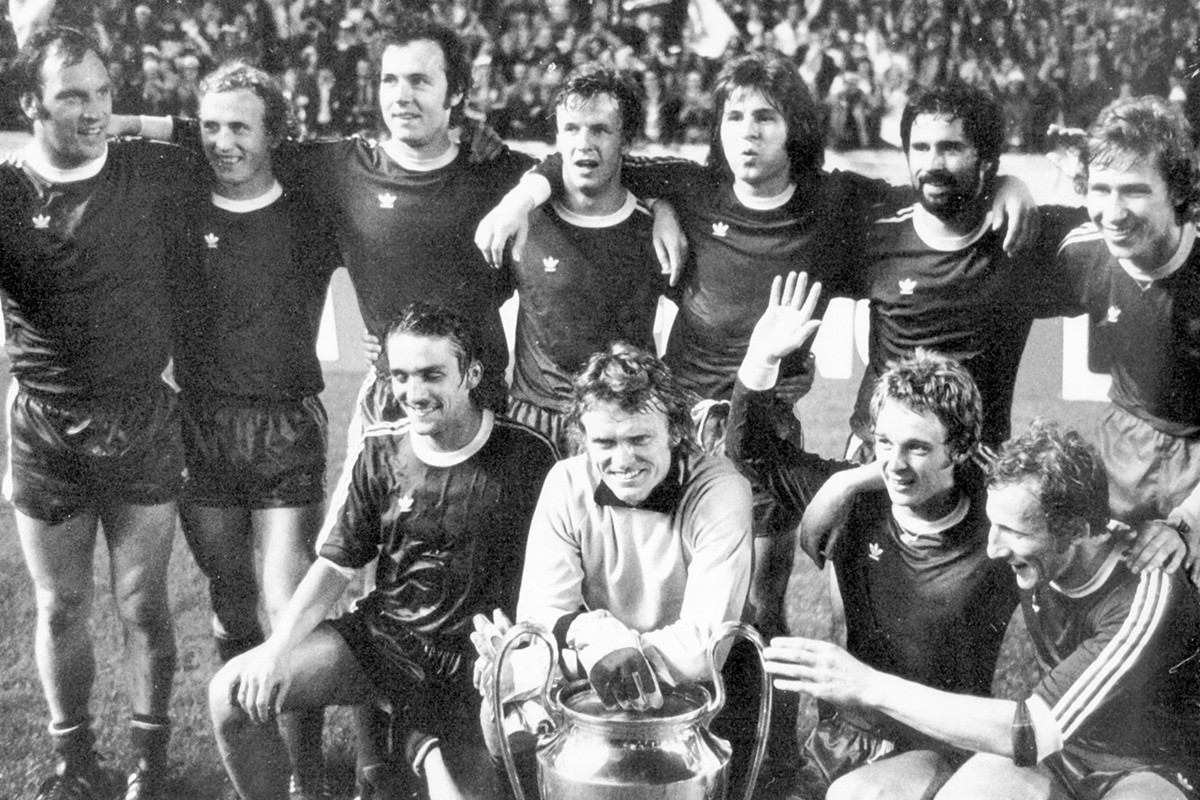 Nine minutes from time and the result was put beyond doubt when Bayern counter-attacked again and Muller scored at the near post. Bayern’s fans celebrated wildly while at the other end Leeds fans were looking to exact a little retribution.

After the game, in his post-match press conference, Leeds Manager Jimmy Armfield was a little more diplomatic in his assessment of the officiating. “I did not agree with his decisions, but that’s football,” he told reporters. “I thought the decisions hurt our team. If anything we had too much of the ball. We did all the running and tired ourselves out. The lads played well. They played their hearts out and I think that makes it worse.”

Somebody who was not so pragmatic was Leeds striker Peter Lorimer, who later revealed his inner feelings to the Yorkshire Evening Post about that night. “Cheating is the only way to describe what went on at the Parc de Princes 40 years ago,” he said. “Sorry if that offends anyone but it’s how we felt. When it comes to apportioning blame, you’ve got to point the finger at the referee first and foremost.

Great player though he was, Beckenbauer was well known for getting in the ears of referees. It’s what he did. I’d seen it when he played for Bayern and I’d seen it when he played for Germany. I’m still convinced that he was responsible for persuading the officials to disallow my goal in the second half. Uli Hoeness, their forward, was interviewed on TV and asked about 1975. In his own words, he said that the result was a travesty. The better team lost and they lost for no other reason than the performance of the referee. I can’t disagree.”

Lorimer’s feelings were shared by the Leeds fans who were already seething at the decisions they felt had gone against them and decided to take out their anger on whatever they could find. The trouble that continued long into the night resulted in a German TV operator suffering an eye injury,  a photographer a broken arm, the smashing of a £50,000 television camera, not to mention brawls in the city that lasted long into the night and damage to private property.

Such was the level of violence UEFA even considered the possibility of abandoning European competition altogether but settled for banning Leeds United from the continent’s top competition for four years, though it mattered little as it would be another 17 years before they qualified for the tournament again.

To this day nothing can be proven about the decisions that were or weren’t made by French referee Michel Kitabdjian that night at the Parc des Princes and the actions of the Leeds United supporters certainly can’t be justified; but what is sure is that even after 40 years, the events of that night still rankle with the supporters and officials of Leeds United, as well as providing something of an unheeded warning of further trouble that was to blight European football in the years to come.