This is a preview of the Clermont vs Brest fixture to be played on 19th September 2021. Football Whispers has also put together the best predictions and odds for this game in this post.

Clermont’s good run of form came to a sudden end when they lost massively to PSG in a 4-nil defeat last season. Can the newly promoted side stand another test against Brest on Sunday? The following are our best and bias-free predictions for this game:

Note: These odds from Grosvenor Sports are subject to change.

Clermont only managed two shots on target against PSG last season despite having 48% ball possession. They had the most possession of 55% against the Paris giants in the second half. In this game, the hosts could do even better, especially after a spirited fight against PSG last weekend. The hosts have failed to keep a clean sheet in the last three games while Brest has failed to do so in the five games played so far. Backing goals on both ends is a value bet.

Brest to open the scoring

After Utopian start to the new season of two clean-sheet victories of 2-0 against Bordeaux and another 2-0 over Troyes, Clermont's defence seems to have crumbled. The hosts leaked at least two goals in each of their last three games. Another game with a defensive problem that could get worse is why we think they are susceptible to conceding the first goal in this fixture. We think Brest will build on their 1-1 draw at home last weekend against Angers to score first.

We are tipping lots of goals in this game as our third prediction. Both sides have serious defensive challenges and we are likely to see more than two goals scored in this match.

Clermont vs Brest: the Latest Team Stats, Odds and History

Match Preview: Is Clermont Foot Staring at another Potential Defeat?

After a fairytale start to life in Ligue for promoted side, Clermont Foot, the hosts have now gone without a win in three games. They kicked off the season with back to back to 2-0 victories but settled for the spoils in a 3-3 draw with Lyon in the third game of the season. They also bagged a second draw of the season in fourth match against Metz that ended 2-2 before a massive loss of 4-0 last week to PSG. While playing at home in the sixth game should motivate the hosts for a better result, it could prove tricky against Brest that recovered from three consecutive losses to share the spoils with Angers in a 1-1 draw last weekend. The visiting head coach, Michel Der Zakarian, has never lost a match to his Sunday host, Pascal Gastien. 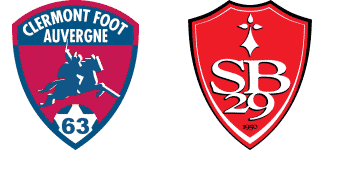 Which referee will oversee this match?

Bastien Dechepy has been slotted to take care of business on matchday.

Where will the game be played?

The match will take palce at Stade Gabriel Montpied in Clermont-Ferrand, France.